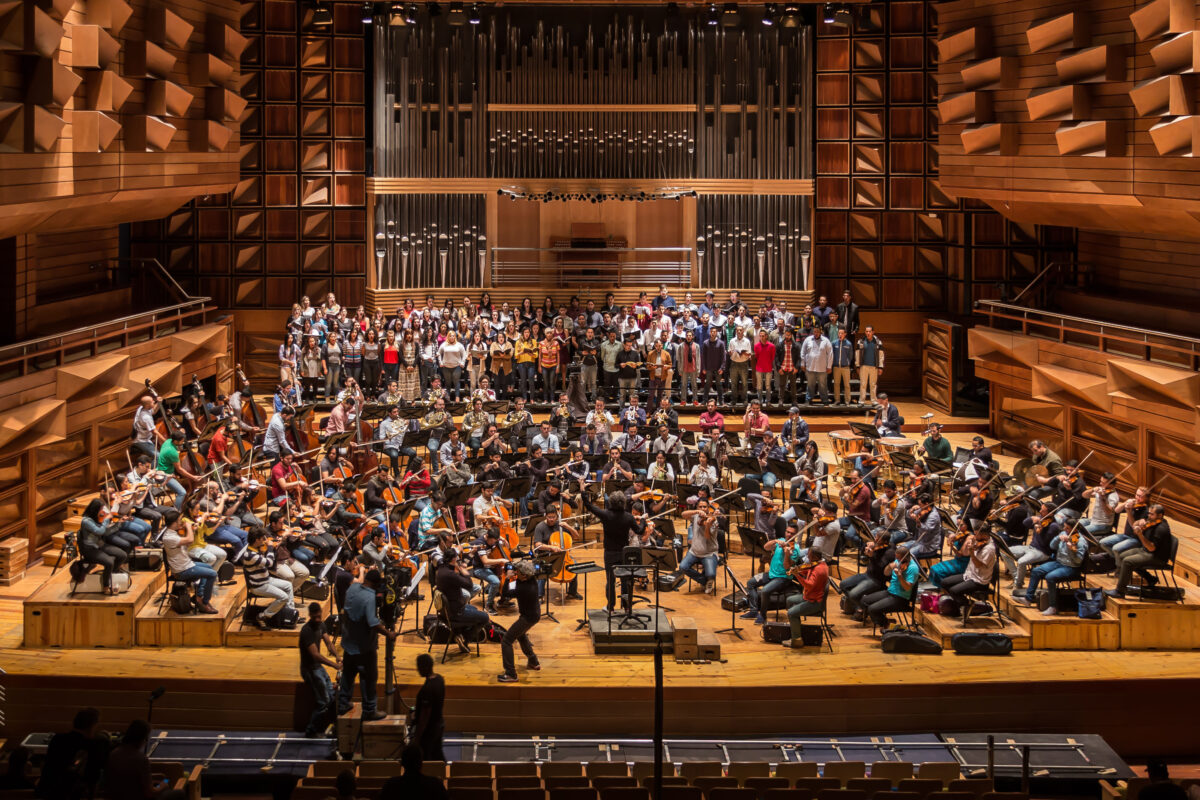 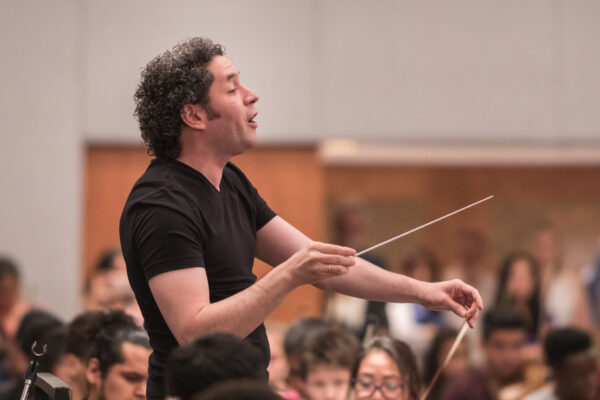 It was love at first sight. Young, handsome, passionate, bright-eyed, enthusiastic. Gustavo Dudamel is that and so much more. We changed our seats from center orchestra to orchestra view below the organ. The cheapest seats in Disney Hall and by far the best view, are of Dudamel in all his glory, face forward. He steps to the podium in his black silk shirt and dark pants, hair pomaded to his skull, baton in hand, and begins his courting of the orchestra. And virtually minutes into the piece, whether Beethoven or Bernstein, the smile appears, the bounce grows, his enveloping arms extend to the orchestra, and the hair explodes as this glorious conductor reaches out to the musicians, his musicians, and to us. The Los Angeles Philharmonic, always a top rank orchestra, is now other worldly when under his spell. And why should they not? Dudamel is all inclusive. At the end of a piece, he stands on the podium and opens his arms to embrace them all and then steps into the orchestra to acknowledge individual soloists or whole sections that contributed mightily to that composition. His star shines brightly enough to share the light and it is reflected not just in how the orchestra plays but in how they view him as their leader. With a nod to the Coen Brothers, he is the Dude!

An opportunity to spend an evening following Dudamel around the world in Theodore Braun’s exceptional documentary ¡Viva Maestro! is not to be missed. Subtitled “The Man, The Music, The Magic” is all of that and more. We are given a glimpse into Dudamel’s origin story with El Sistema, the phenomenal program started in 1975 by José Antonio Abreu in Venezuela that was created to foster social and intellectual transformation through music education for the youth of his nation for whom instruments, lessons, and teachers are provided free of charge. 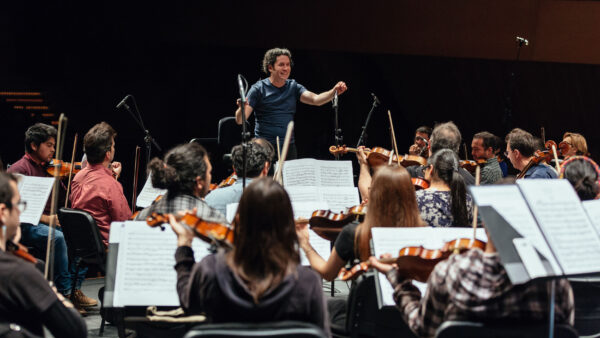 We see Dudamel’s rise as a young violinist to conductor of the youth orchestra under Abreu’s tutelage. Archival footage and stills of the young Dudamel show his passion, joy, and love of music, something that was recognized early by Abreu who helped his protegé understand the universe of possibilities offered by music and how to use them. But not just how to use them, more importantly, how to share them. Dudamel was by, from, and of El Sistema. Already studying conducting at age 14, by the time he was 18, Abreu appointed him the director of the Simón Bolívar Orchestra, the national youth orchestra of Venezuela. By the age of 22, he was an assistant to internationally renowned conductor Simon Rattle, who, early on, recognized his talent and speaks warmly on camera of the experience working with the very young conductor.

Even as the world of international conducting opened up to him in his early twenties, his loyalty and heart remained with the Bolivar Orchestra, the students of El Sistema, and especially with Abreu who remained a constant influence in his life. The next time you watch Dudamel, pay attention to those arms and hands as they reach out to the orchestra. It was Abreu who opened him up, helping him discover that the sounds must be felt in the hands and the arms must extend out to enfold the players.

One truly feels that for Dudamel, the music is his life, not a job. His mission is to share the music with the world and create a universe where the students of El Sistema have a place. He shot to international attention when he won the Gustav Mahler Conducting Competition in Germany in 2004 (age 23), made his U.S. debut in 2005 with the Los Angeles Philharmonic at the Hollywood Bowl, and by 2007 he was announced as its music director, beginning with the 2009-10 season. Prior to his official start as music director, he created the Youth Orchestra of Los Angeles (YOLA) in partnership with the Los Angeles Philharmonic. A direct descendant of the Simón Bolívar Orchestra and El Sistema, Dudamel stated that its mandate was “To share music with children – who might not otherwise have access to it – is to share beauty, to share a different way of being. It can change their definition of what is possible for themselves.” 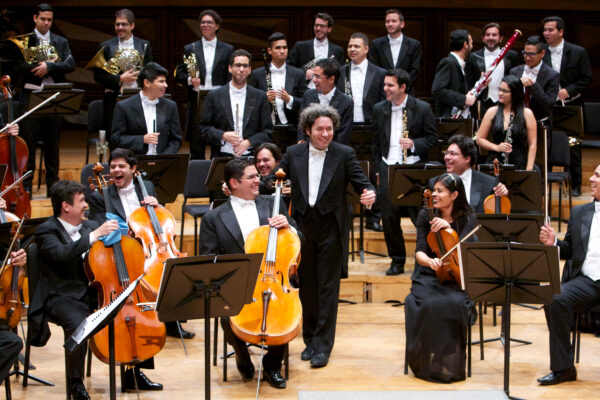 Much of the journey that the gifted Theodore Braun takes us on revolves around Dudamel’s work with youth orchestras, starting in Caracas in early 2017 as the Simón Bolívar Orchestra is rehearsing for their upcoming tour of Vienna and Germany where they will perform the Beethoven symphony cycle. Flies on the wall, we see him rehearse the opening bars of the Fifth Symphony as he explains to them what those first, famous, four bars need to sound like and why they matter. As listeners, we take that initial passage for granted without wondering why, but, as Dudamel points out to them, they set the tone for the rest of the piece. We hear the metamorphosis as they understand and transform their playing. He does the same thing with one of the choral passages in the Ninth Symphony as he tells the singers he needs “sparkle.” Not entirely understanding his explanation, he pivots and says he needs it to sound like “champagne, not moonshine.” Perhaps his explanations to professional musicians entails more “staccato” than “effervescence” but to the amateur, I instantly understood and so did they.

Dudamel had always tried to avoid politics but politics refused to avoid him. His hope was always that music would contribute to change but the increasing violence in Venezuela and the deaths of protestors, one of whom was a member of his orchestra, eventually forced him to take a stand in his well-thought out and reasoned Op-Ed in the New York Times in July 2017 entitled “A Better Way for Venezuela.” Among other things, he stated, “In the past, I have fought the urge to enter the political discourse, believing that it was not my role. Yet people have tried to read my past actions like tea leaves, searching for deep political meaning. I am not looking to take sides; I am willing to take a stand. For me it is about the values and processes that choose our political leadership, not who that leader is ultimately.” As he says later, “They can cut the flowers but they can’t stop the Spring.”

The reaction and punishment by the government of Nicolas Maduro was almost immediate. Dudamel was no longer welcome in the country and the series of international concerts scheduled in Asia for the orchestra was canceled. Members of the orchestra left in increasing numbers and everything Abreu started and Dudamel nurtured was in imminent danger. 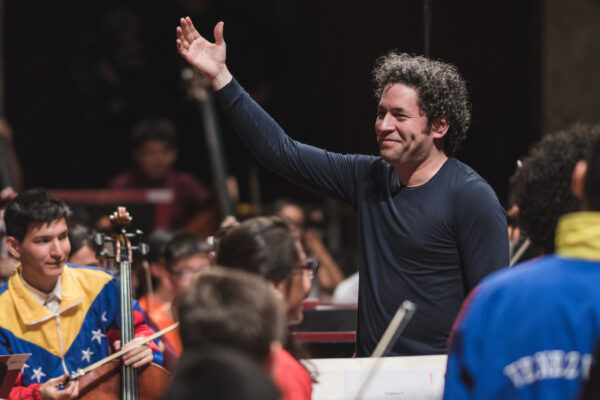 But Maestro Dudamel, an optimist in a raging storm, is unbowed and conceived of an orchestra to perform in Santiago, Chile composed of an international mix of youth players from all over the Americas (Canada, United States, Mexico, Argentina, and Venezuela) teamed with seasoned performers from great international orchestras like the Los Angeles Philharmonic, the Berlin Philharmonic, and the Vienna Philharmonic, among others, who would mentor, guide, and work alongside them.

Look carefully as the camera pans from the street into the symphony hall and you will see the poster for the concert. “Gustavo Dudamel. A mi Maestro. A Concert in honor of José Antonio Abreu.” Gustavo Dudamel has brought us full circle. As the concert hall fills, Maestro Dudamel steps on stage. He addresses the audience with “Dear Maestro Abreu, we are here because you united us through music, through art. You made us understand that with these human elements we can transform the world. Honor and eternal glory to José Antonio Abreu.” As his orchestra, composed of youth and experience, plays a rousing version of Abreu’s favorite, Tchaikovsky’s 4th Symphony, we understand that this is not about one Maestro but about two, the son honoring the father.

“¡Viva Maestro!” is an interesting and welcome departure from Braun’s previous documentary, the excellent but rather depressing “Betting on Zero” about hedge fund CEO William Ackman in his quest to prove that Herbal Life was an illegal pyramid scheme. There were no heroes in that saga, only victims.

Braun captured Dudamel at an auspicious moment, gaining his cooperation for a film just prior to beginning rehearsals with the Simón Bolívar Orchestra for their European tour. A master storyteller, Braun, who played bassoon in college, connected on both a personal and a musical level with his subject.

Documentaries do not write themselves and Braun, the writer, constructed the narrative framework from which Braun, the director, could work. It is the sign of a transparent filmmaker when you just believe that the people being interviewed or reflecting on their experiences are speaking spontaneously, and in some ways they are. But it is the writer who has devised the triggering questions that elicit the stories that pour forth. In less experienced hands you might hear the questions being asked, but not in this case. Whether it’s Dudamel or his students, someone led them in a direction that the film needed to go. Archival footage augmented the present day stories by filling in backstory and enhancing what we experience in the moment. His original goal was to focus on the conductor’s relationship with his musicians and illustrate the process of making music. That there were major shifts in the narrative, unfortunately brought about by the political upheaval in Venezuela, only deepened Braun’s relationship with Dudamel in telling the story. 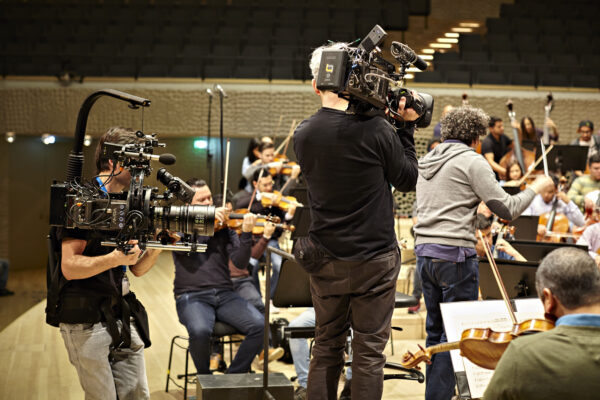 Braun, the director, knew exactly how he wanted everything to look and gathered an outstanding crew to supply him with the shots and sounds that told the story. Dudamel, as anyone in his position would be, was adamant that the film crew not interfere with his process or distract the musicians as they rehearsed and performed. Braun and his crew were so successful that even Dudamel often forgot they were there.

Recording the sound needed to be both immersive and inobtrusive. Working with cinematographer Buddy Squires and sound recordist John Zecca, they devised a way to capture the music from inside the orchestra by using multiple cameras, each mounted with hyper-cardioid directional microphones allowing them to capture both individual instrument “clusters” as well as the overall musical experience from the concert hall. The end result was blended together by sound mixer Ron Bartlett who recently won an Oscar for his work on “Dune.” Visually beautiful, the sound is stunning and brings the viewer into the orchestra.

This is a film to be experienced, not just seen (and seen again). It is the perfect confluence of music, drama, and uplifting story. All I kept thinking at the end was I wanted more and I think you will too. He is the Dude and the Dude abides.

Opening Friday, April 8th at the Landmark on Pico. Opening at the Laemmle Playhouse 7, the Town Center 5, and the Glendale on April 15.