What to do in Los Angeles? 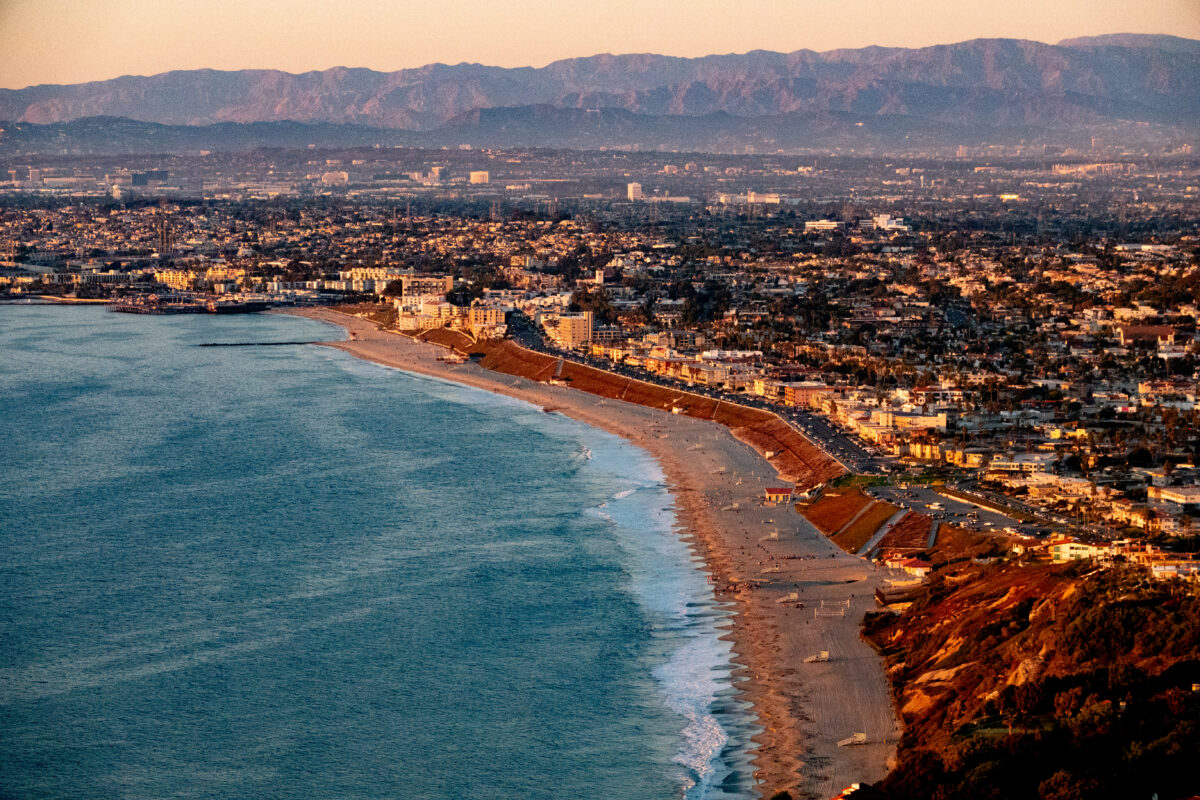 If you have friends or relatives coming to town to visit the City of Angels at some point, some opinionated guidance for all of you.

The video above will show you all the expected sights, (minus theme parks!) from Hollywood and Beverly Hills, the beaches and the downtown wonders like Walt Disney Concert Hall and Union Station.

But let me add further here: Los Angeles is a sprawling city of roughly 4 million people, with 12 million in the greater area. We’ve got city life, canyons, mountains, incredible architecture with some buildings over 100 years old, traditions and our beloved beaches.

Most tourists would hit Hollywood Blvd., Rodeo Drive in Beverly Hills and the beaches of Venice and Santa Monica over a one to two day visit.

Hollywood Blvd. is in fact rather seedy, and while you can see “stars” there, they are on the ground of the “Walk of Fame” which extends from La Brea to past Vine over 15 blocks. You can see footprints of stars of the past, like John Wayne and Humphrey Bogart, in front of the old Grauman’s Chinese Theater. The oldest restaurant in L.A., Musso & Frank, is down the street from the theater (and still amazing) while one of the great Italian restaurants, Micelli’s (“home of the singing waiters”) is across the way, and has been in business since 1949.

Traffic is intense in the area. 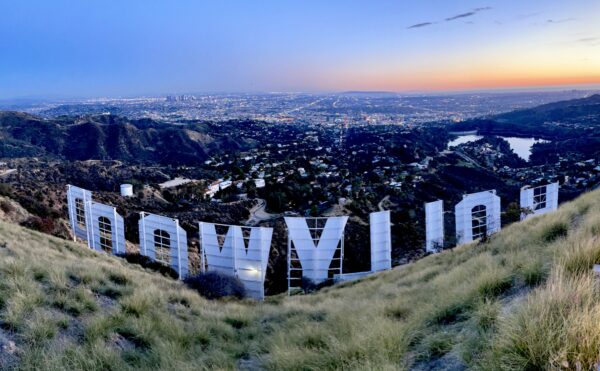 The Hollywood Sign by Jefferson Graham for the PhotowalksTV series

The Hollywood Sign is one of the symbols of Los Angeles, but it’s very hard to get in front of. Neighbors who live by it in the Beachwood Canyon area of L.A. are sick of Instagrammers flooding their neighborhood so strict parking regulations have been enacted. One-hundred percent not allowed on weekends. This is the area with the best hike and view of the sign.

Put this into your GPS or give it to your Uber/cab driver 3390 Deronda Drive, Los Angeles. Once parked or on foot, ignore the signs that say you can’t be there (you can,) and head through a gate, which leads to a little park with an awesome view.

For weekend visitors, go to Lake Hollywood Park, 3160 Canyon Lake Drive. Parking is more plentiful and you can visit on Saturday and Sunday. You won’t be as close to the Sign, but it’s still a great view. 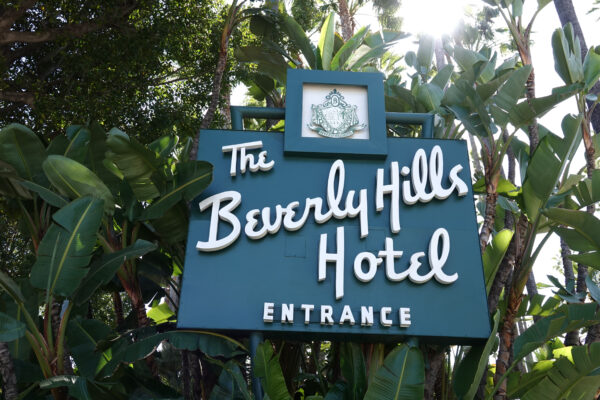 The entrance to the historic Beverly Hills Hotel. by Jefferson Graham for the PhotowalksTV series

The streets of Beverly are clean, it’s a very walkable city, despite the urban myth that people don’t walk in 90210, the stores are over-the-top for wealthy folks but fun to look at, and both City Hall and the storied Beverly Hills Hotel and Four Seasons Beverly Hills Hotel (where “Pretty Woman” was filmed) are still as glorious as ever. Who wouldn’t want a double selfie, in front of the Hollywood Sign and the Beverly Hills Hotel Pink Palace too? For fun, stop into the Polo Lounge and feel like a Player.

Another food tip: the great old Beverly Hills deli, Nate & Als, is still thriving, despite a downturn for delis nationally. Stop in for a nosh.

Again, the iconic photo symbols of L.A. are the downtown skyline, the Hollywood Sign, perhaps a star from Hollywood Blvd., the Beverly Hills Hotel and two beach shots: a lifeguard tower and a surfer entering the water. 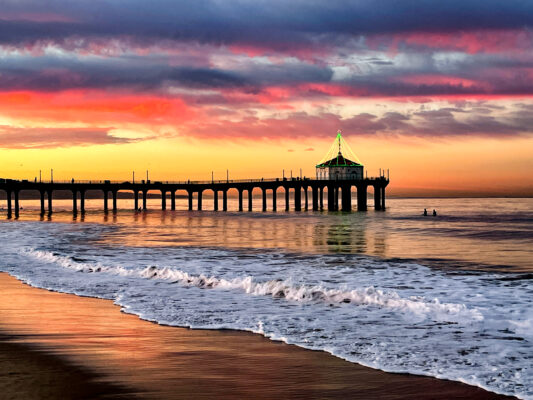 The Manhattan Beach Pier by Jefferson Graham for the PhotowalksTV series

We have many, many great beach towns. Malibu is a little further out for a one day, while Santa Monica and Venice are the closest, and the busiest.

Santa Monica has the iconic pier with the Ferris Wheel and other rides on it, and Venice is home to a vibrant, wild street scene that’s especially active on weekends. You can walk for miles and just enjoy the free show in front of you, with wild stores and people. There’s also one of the largest homeless communities in the area, which may make you feel uncomfortable.

As many of you know, I prefer the South Bay. Our beaches are quieter, cleaner, less crowded and photographically awesome. If you’re heading back to the airport, you can’t beat a visit to Manhattan Beach. We’re just 3 miles away from LAX.

The Strand, a 12.4 mile walkway which extends from Playa del Rey to Manhattan, Hermosa, Redondo and a sliver of Torrance Beach generally has two lanes: one for pedestrians and other for cyclists.

Down the road, Hermosa Beach is smaller, funkier and home to many restaurants and bars in a pedestrian-only walkway called Pier Plaza. Redondo has a large fishing pier that’s often frequented by large pelicans and a separate walking path called the Esplanade, which looks down at the ocean waves.

Up the hill is the Palos Verdes Peninsula, the greatest hidden secret in L.A., our Hawaii, offering the best coastal views in the Southland. Continue south, and the coastal route continues, to Long Beach, Orange County beach cities (Huntington, Laguna, Newport) and onto San Diego and the California border with Mexico.

Check out the video below of Manhattan Beach on Thanksgiving morning. Pretty cool place, right? 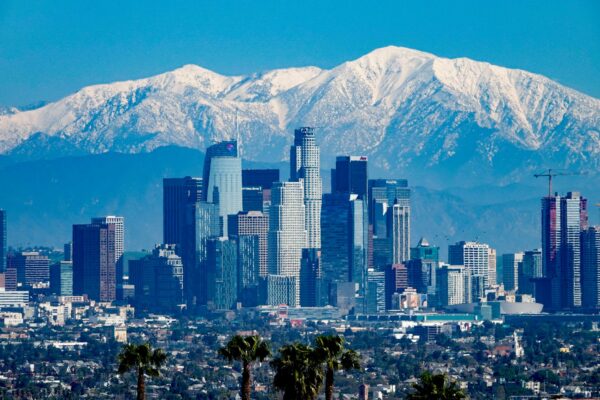 Los Angeles skyline by Jefferson Graham for the PhotowalksTV series

Griffith Observatory has the best views of urban Los Angeles (city lights like you’ve seen in movie posters) and even if you don’t go inside for the science, just walking around the grounds is fantastic. Parking is very hard—it’s that popular. But during winter months (like now!) it’s free mid-week until noon. But you’ll need to be there early to snag a spot. Otherwise, public transportation is encouraged. When spaces disappear, you park at the Greek Theater, down the way, and walk about two miles up the road to get to the Observatory.

The Grove/Farmer’s Market is a great shopping mall in the heart of Los Angeles, with a wonderful taste of the old (Farmer’s) mixed with modern, Disneyland like shopping mall experience at the Grove. And the classic Canter’s Deli is right up the road.

Kenneth Hahn Park/Baldwin Hills Scenic Overlook: If you can’t get into Griffith, these two parks have way more plentiful parking, and also a terrific view of the downtown skyline. This is where people like me go in early January to get the skyline with snow behind her.

Philippe’s Original and Dodger Stadium. Many people like to come to L.A. and see a ballgame. Before or after, many stop at Philippe’s (1001 N. Alameda St.) home to a French-dipped sandwich that wasn’t invented there, but certainly perfected. The 80-year-old plus art deco Union Station is across the street, and makes a fabulous place to gawk and pose.

Deli walk: As many of you know, we here are fans of the great Jewish deli, and while many are closing, due to changing tastes and the next generation not having the energy to keep them going, L.A. probably has more great delis than any other city. Los Angeles proper has Langer’s (home of the $19!), Canter’s, Factor’s, Daughter’s, Wexler’s and Nate N’Als, while the San Fernando Valley has a host of great ones, including Art’s, Mort’s, Brent’s and Uncle Bernie’s. (Langer’s is considered to have the best hot pastrami sandwich, while the sandwiches at Art’s are still a work of art, and quite stuffed. Canter’s has the best visual experience, and if you get to the Valley, Brent’s is amazing and under-rated.)

We also have amazing Persian food in the Westwood and Glendale areas, a thriving Chinatown, Ethiopian and Korean enclaves and on and on she goes. It’s a thriving city.

Hope your family and friends have fun, and hit me up with any questions. Website: http://www.jeffersongraham.net