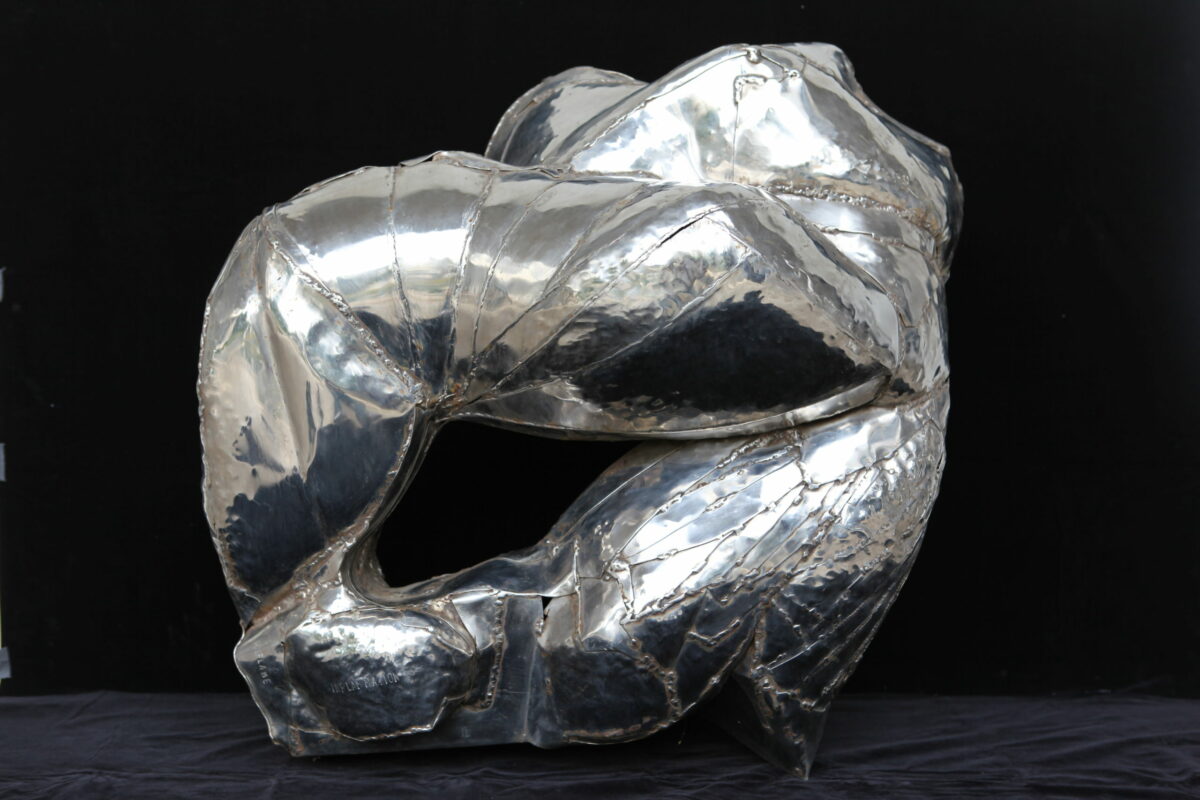 Work by Simon Ouwerkerk at the Manhattan Beach Art Center (the photos of the sculptures, in situ, are courtesy of Homeira Goldstein) 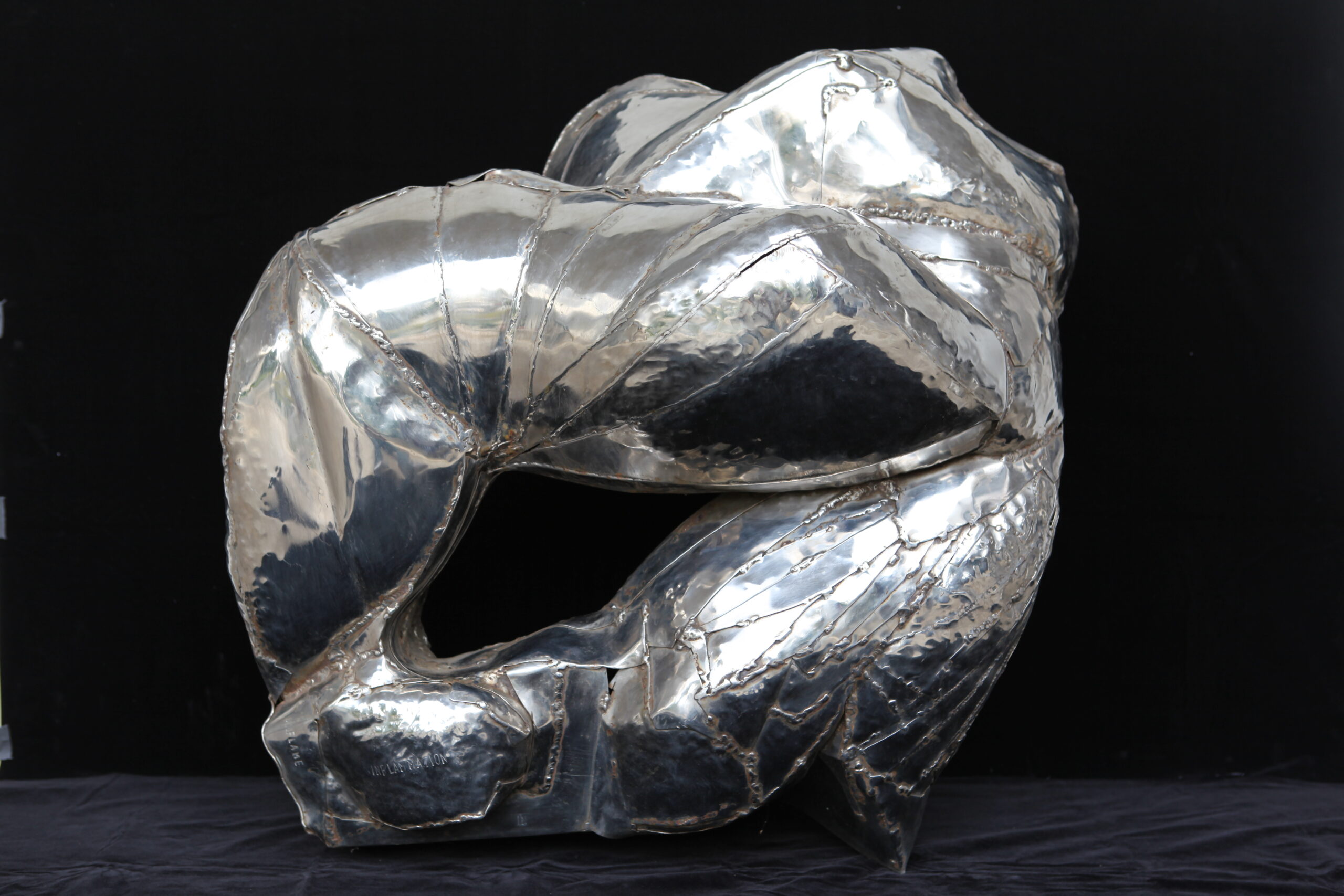 Work by Simon Ouwerkerk at the Manhattan Beach Art Center (photos of the sculptures, in situ, are courtesy of Homeira Goldstein)

Sculptures on the move

Simon Ouwerkerk puts his pedal to the metal in Manhattan Beach

Across the board, artists have been cheated. Cheated from performing in front of a live audience or from having their work viewed in person. Right now there’s a full gallery with sculptures by Simon Ouwerkerk in the Manhattan Beach Art Center, but the building is padlocked. That’s like having the latest novel by an author you admire with all the pages glued together.

Even so, “Form and Movement,” an exhibition of Simon’s work curated by Homeira Goldstein (of Time4Art), which by the way has been thoughtfully installed, with each piece given its own breathing room, is going to walk out of the gallery doors this Saturday and take up positions around the circular building. It’s an odd ploy, unthinkable a year ago, but one born of necessity and giving us the opportunity to savor the work in the company of others. At day’s end, the figures will march or be marched back inside, where they’ll brood unseen and in silence until they reemerge one more time, on Dec. 19. 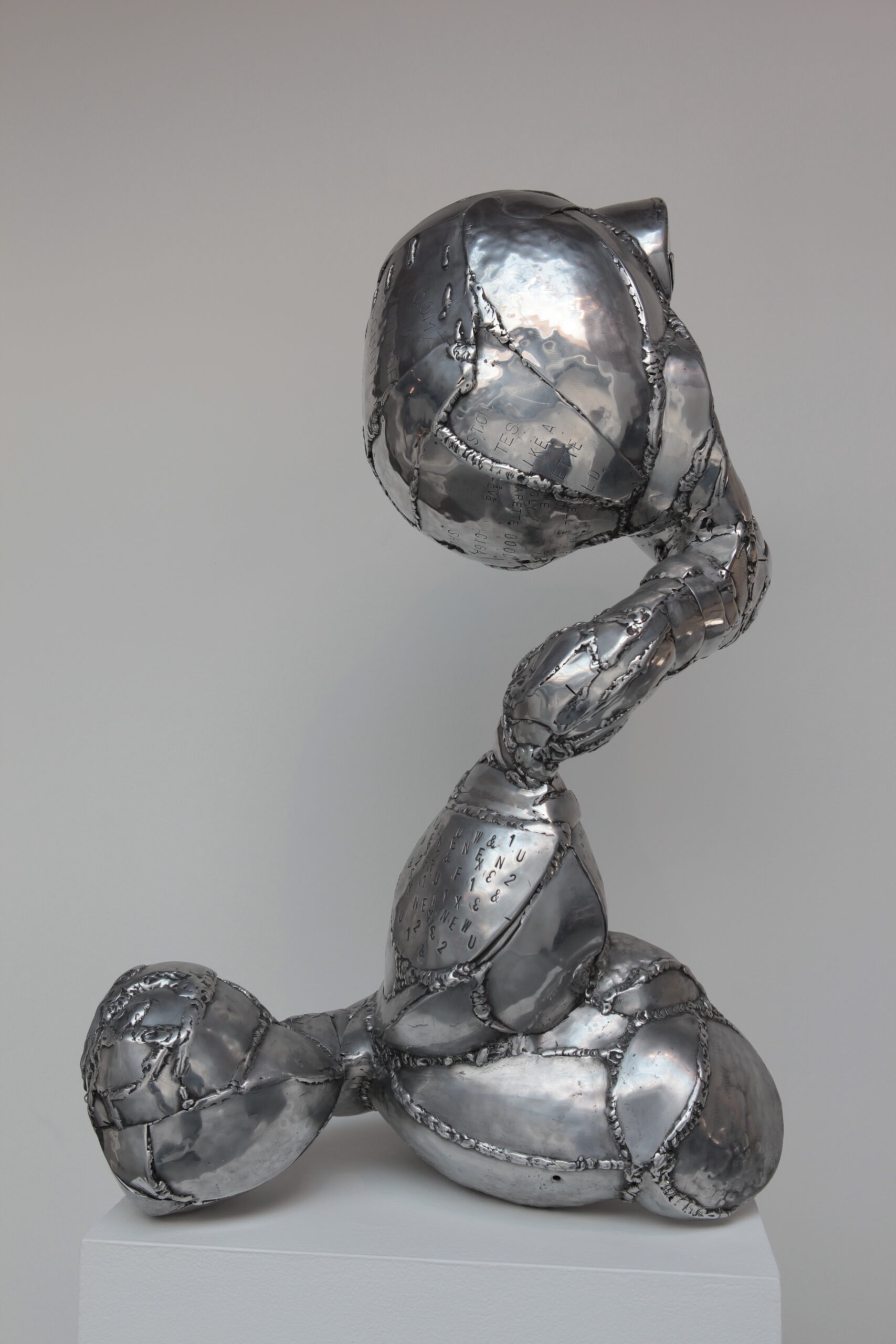 A mind teeming with ideas

Simon Ouwerkerk is a South Bay native who attended Mira Costa High School and El Camino College before heading south to San Diego State where he earned a bachelors in art with an emphasis on sculpture.

Homeira chanced upon Simon’s work in the early 1990s when he was exhibiting at El Camino, and she didn’t hesitate in forming her opinion of it: “I ended up buying every piece of work Simon had that was available for sale,” which meant nine more pieces for her wide-ranging, modern art collection. As to what drew her to the young man’s sculptures:

“I relate to Simon’s work because for me it’s so organic,” she says. “There is movement in it and there is mystery, and I appreciate the fact that he is so obsessed by process. He is free in what he does, and I relate to that because part of what my journey has been is that I don’t always look at the benefit of the results (but rather) I appreciate the process to get there.”

Furthermore, Homeira continues, “What I really appreciate about his work is that he is so versatile: What he can create is endless.”

Although they’ve been affected by it retroactively, the sculptures in “Form and Movement” were with two exceptions finished before the pandemic closed the doors on us in March. One of those works is a set of mounted wall-pieces that, not surprisingly, won’t be available for viewing on Saturday. But although the pandemic has affected our chances of seeing the art, it hasn’t so much affected how the artist continues making it.

“I’ve had a couple of commissions during the pandemic,” Simon says, “and I just worked on them as though nothing had happened. I do art in isolation, and it was a way of escaping and just focusing on my work and not being distracted by all the bad news.”

Asked about an overall philosophy regarding his approach to art, Simon replies that, “For me, it’s kind of like an obsessive-compulsive behavior, like an insanity that I have; and that’s how I control my insanity. It kind of organizes me.” 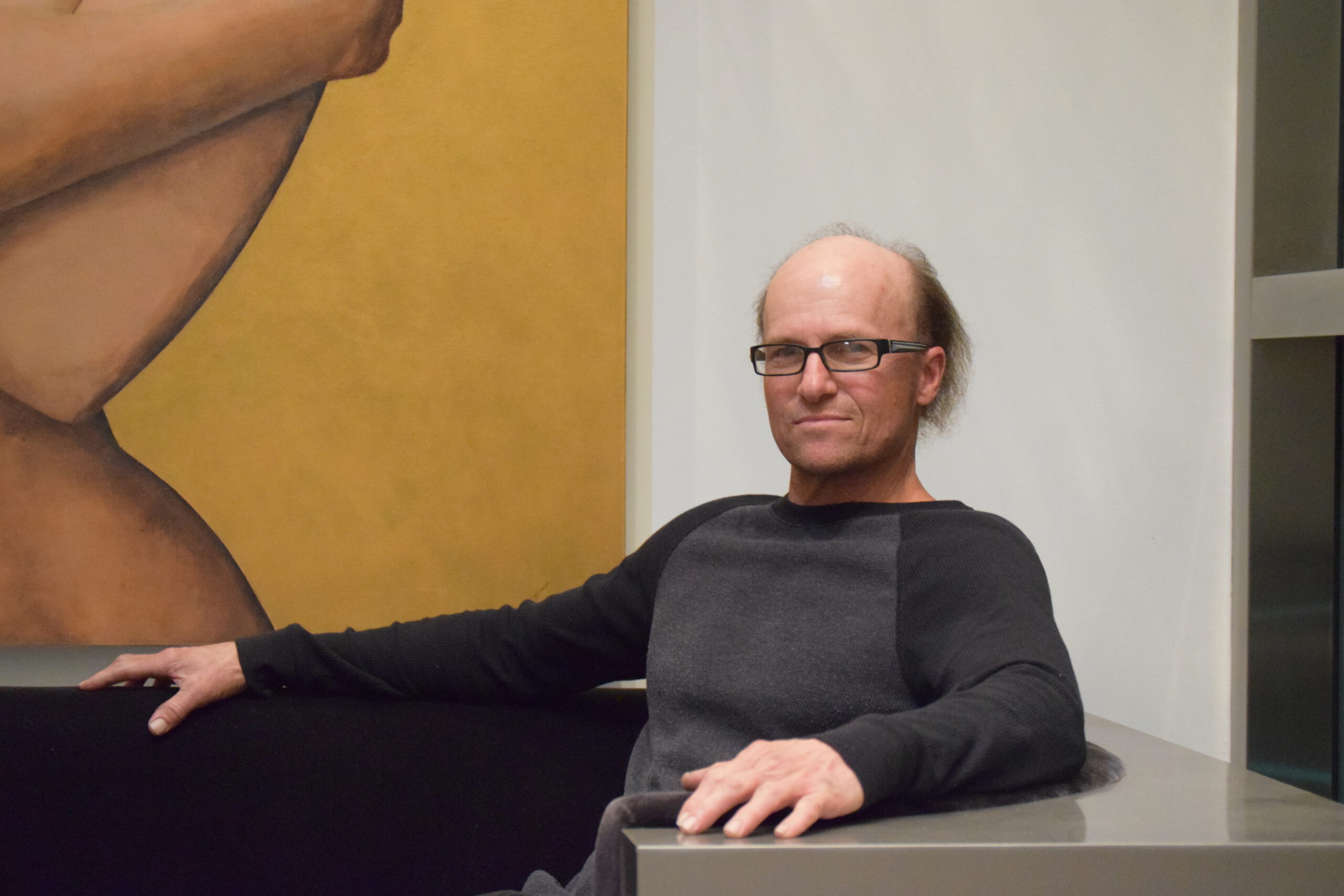 So how does he get started?

“Most of my work starts off spontaneously,” Simon explains. “Usually I have an idea in my head of what I want to do, and I try to move in that direction. If it doesn’t look right I’ll just change it. But as I approach the end of a piece, or what I think is the end of a piece, it becomes more and more controlled throughout the process.”

However, we can discard this explanation when it comes to his commissioned work.

“People like to see what I’m going to make ahead of time. So I’ll just throw out a bunch of ideas in the form of sketches. Then it narrows down to the one they like, and I’ll make a scale drawing from that. Most of the time, if they give me the go-ahead, I’ll go directly from the scale drawing to the sculpture.”

He brings out a thick sketchbook, and the drawings, although fairly small, are quite inventive and detailed. The mind at work is an amazing thing, isn’t it? 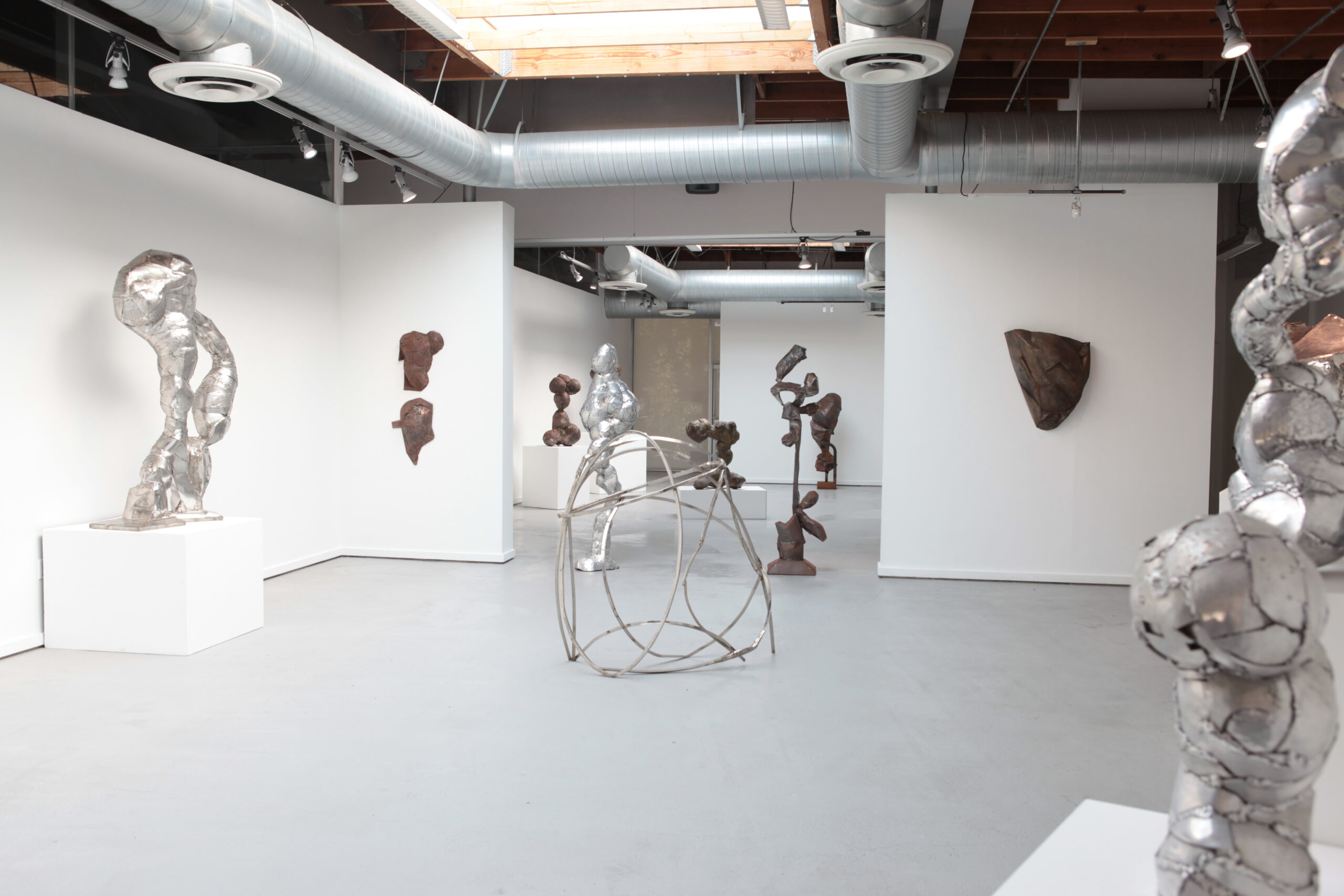 In the gallery. Much of this work will be outdoors on Saturday

“The forms are also abstract,” Homeira says, “and when I look at them I always find something new.”
For this writer, an initial survey of Simon’s work calls to mind abstracted pieces of knights’ armor—as if someone in King Arthur’s foundry had been slipped a tab of LSD as he began hammering away.

“Ever since I started making sculpture,” Simon says, “people would bring up knights in armor.” He mentions Dox Quixote, and then quickly makes it clear that he’s not thinking of body armor while he’s working. Do people mention anything else that the work reminds them of? “Most of the time they bring up things like different kinds of animals.”

What’s true is that, despite being formed at a foundry and machine shop, be it stainless steel or brass, the resultant shapes are organic in nature and at times they reference the human body. Some of the works have animal names as well: “Rabbit,” he mentions, and also “Bison.”

Furthermore, the word “Bison” is stamped onto the piece, and Simon explains how this came about:
“I started stamping letters and some phrases into the metal, phrases that would come into my head. It kind of culminated in one piece that I call ‘Me.’ It’s like the narcissism of the artist or sculptor (who often may boast) ‘It’s all about my work.’” The stamping, however, must be completed before the metal is welded and hammered into shape because otherwise there would be a lot of dents and thus a less graceful look. 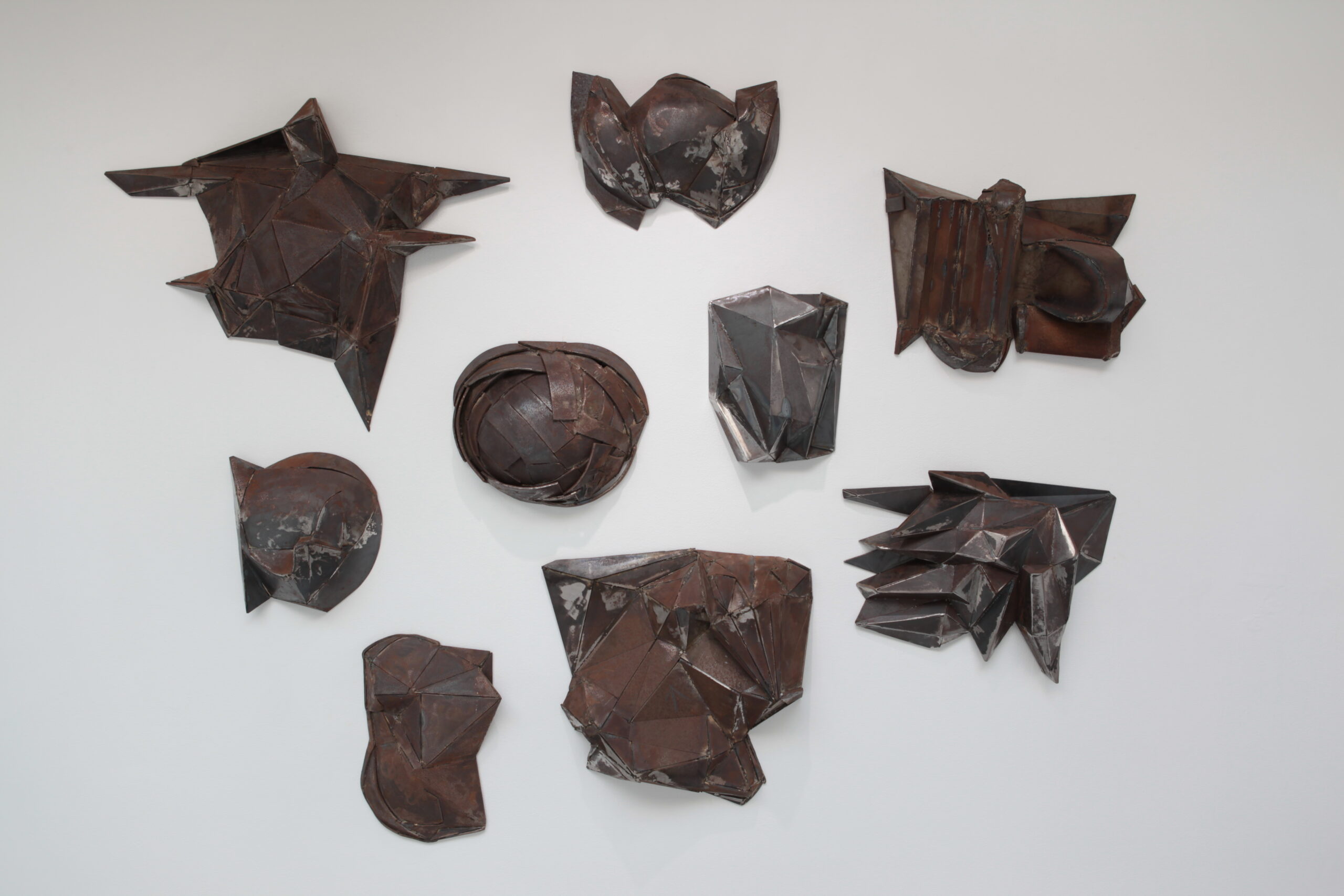 Ideas past and present

An artist worth his or her salt evolves or at least refines their work over time, and Simon points out that his earliest pieces were quite simple, flat sheets of metal that were cut out and welded together. “ “The current work is much more volumetric; a lot of volume and a lot of hammering.”

And, because no one stays chained up in their studio forever, there are influences.

I didn’t ask if Frédéric Auguste Bartholdi was also an influence. He’s the fellow who created the Statue of Liberty, but so far Simon’s largest work, considerably smaller, oversees the swimming pool at the Goldstein residence. 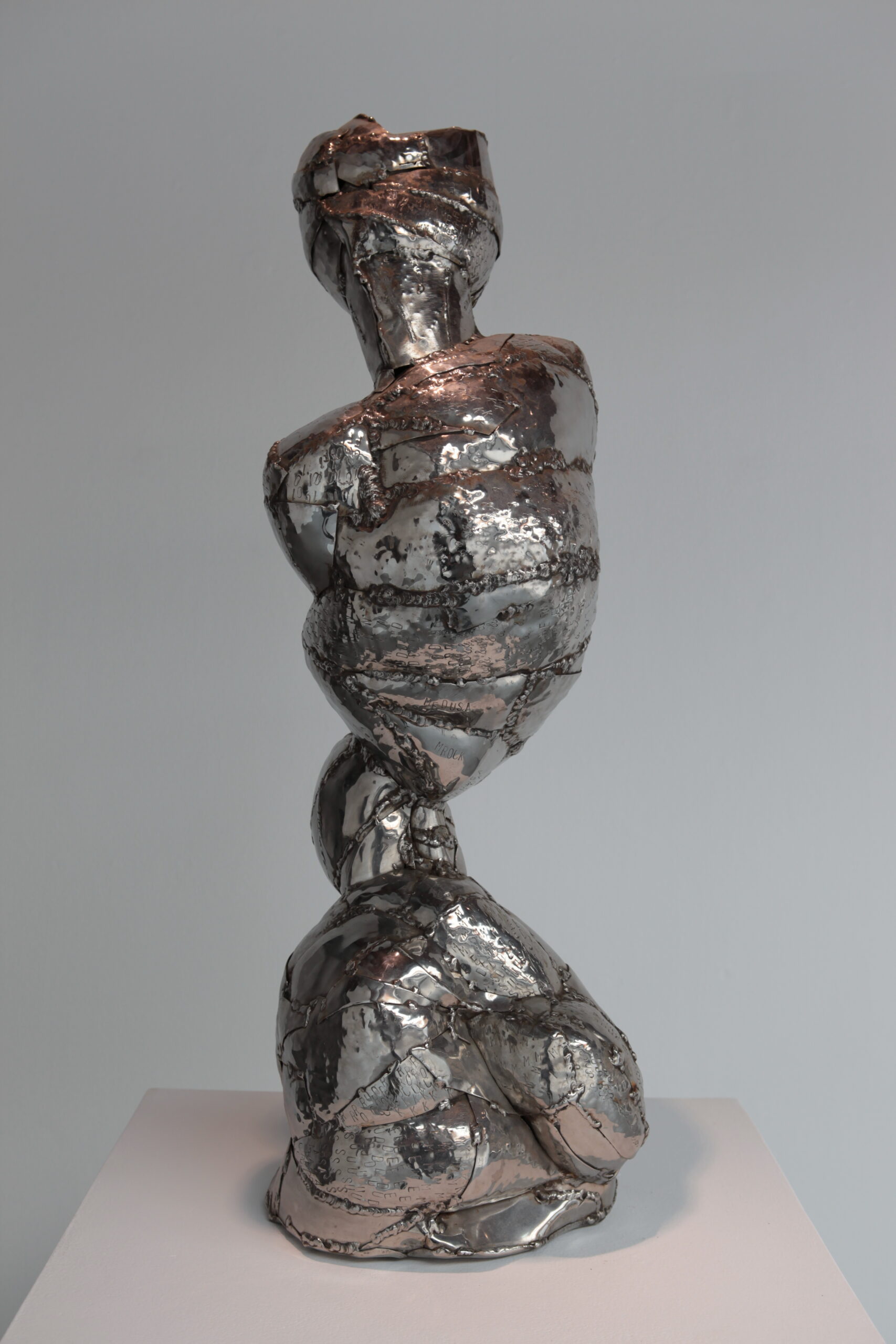 “To do very large-scale work,” Simon says, “there has to be space for it, and there would have to be a commission, a budget, and so forth.” Actually, size-wise, he’s been more active in the other direction. For example, “I’ve been making small pieces for wall-mounting because they’re very manageable and they don’t take up a lot of space. They’re like paintings—you can just hang them on the wall. There’s always wall space for artwork.”

Although created as standalone works, for “Form and Movement” several of them are clustered together. “I never thought of that kind of arrangement,” Simon says; “they were always separate, just self-contained pieces. I was imagining a row of them on the wall, but Homeira came up with the idea of doing it like a whole installation piece.” It was an idea that Simon had not previously entertained but he’s pleased with the result and presumably open to exploring it further.

Which lastly brings us to the question of what’s next: Do you have ideas for other styles or materials that you might want to examine and try?

“That’s always a possibility,” Simon replies. “There’s one piece in the show that I call ‘Bear.’ It has an organic form and a more structural element to it. Those things might start growing into kind of a juxtaposition between organic and a more controlled and architectural form.

“But I never know when that happens, since I didn’t know I was going to move into this more volumetric work based on all those little fragments welded together until it happened. So, I’m always thinking what could happen next, but I just kind of let it happen naturally.”

Form and Movement emerges from inside the Manhattan Beach Art Center this Saturday from 10 a.m. to 5 p.m. (and also on Sat, Dec. 19, from 12 to 8 p.m.) for public viewing. Social distancing and face coverings required. The inside of the building remains closed. The address is 1560 Manhattan Beach Blvd, Manhattan Beach. An online video of the installation can be viewed at time4art.us. For further information, email art@time4art.us or call (310) 379-5800. ER