While smoking and drinking in Brazil 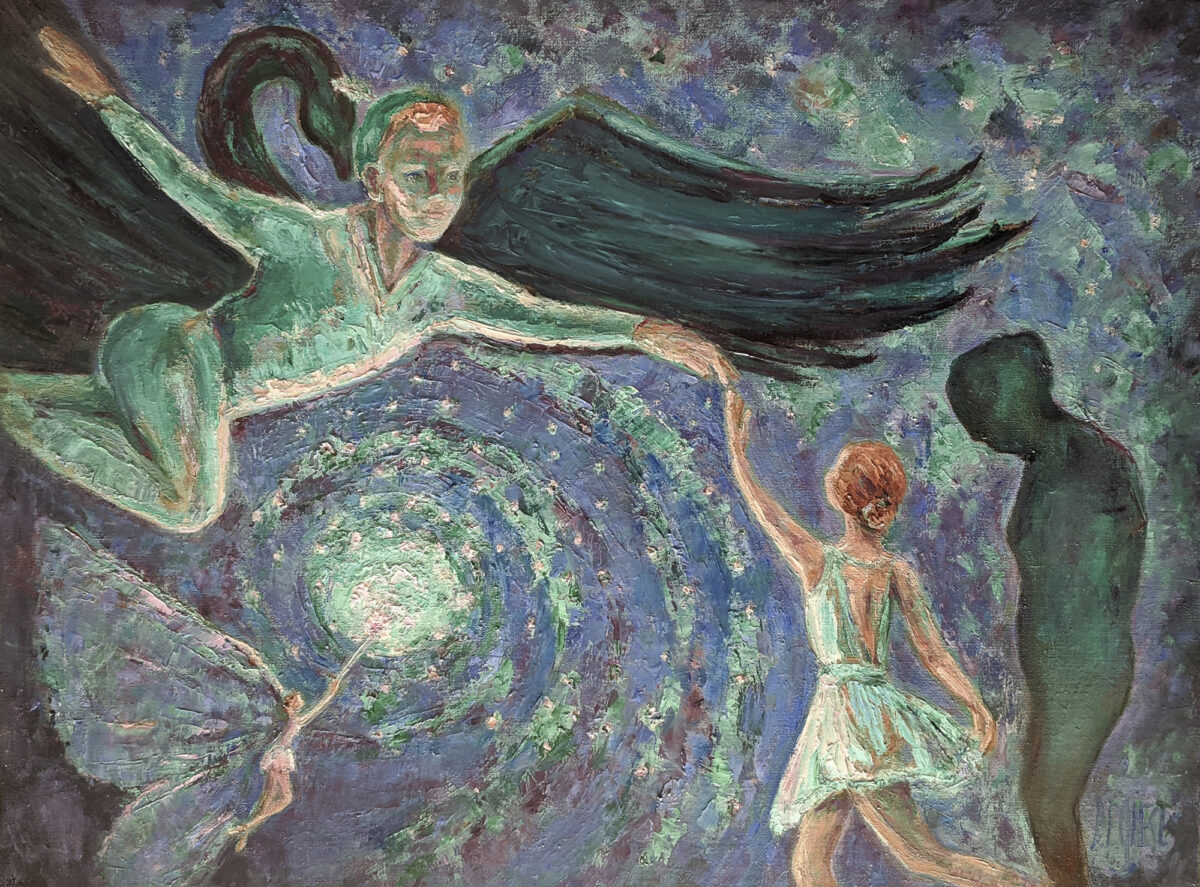 “On Being Taught Ballet by Peter Pan,” painted by Deborah Giese for the postponed but forthcoming art show, “Are You Thinking What I’m Thinking?” “On Being Taught Ballet by Peter Pan,” painted by Deborah Giese for the postponed but forthcoming art show, “Are You Thinking What I’m Thinking?”

“Kiss Me Again as I Ride Off into the Sunset”

A fictional aside for your reading pleasure

In the salon and smoking lounge of Captain Nemo’s Underwater Seafood Restaurant, the Brazilian writer Jô Soares has just told Moacyr Scliar and others that “This is the kind of fable I think you’ll enjoy.” And so, skipping over the preliminaries, he gets down to business:

“There’s a big family celebration, and three or four generations have gathered at Grandma’s home on the outskirts of a large, sprawling city. You don’t need to know which one, although a major river cuts through the center of it and empties into the nearby sea. Grandma’s in the kitchen, she’s been baking pies, cooking a roast, pans full of vegetables, a tray of yams and baked potatoes. Her daughter and daughter-in-laws are trying to assist, Mom, let me do this, let me get that for you, and so on, although Grandma finds them to be more hindrance than help. There’s a football game on the big television and some of the adults are glued to it. Other grownups are with the kids in the yard and in other rooms of the prim two-story house. A long wooden table, with place settings for at least a dozen, maybe fourteen, fills up the length of the dining room. Smaller tables, card tables, have been set up for the littlest members of the family.”

“I think Grandmother is going to have a stroke before everyone can sit down to eat,” said Luis Fernando.

“Maybe,” said Jô Soares, with a twinkle in his eye. “But let me continue. The kids in the yard are chasing the large sheepdog and getting grass stains on their knees, the men in front of the television are letting out whoops whenever there’s a near miss let alone a goal, and Lizzie, Jane, and Victoria are now going back and forth from the kitchen to the dining room and setting platters of hot food on the trivets. Jane wipes her hands on her apron and goes to the backyard porch, cups her hands to her mouth and calls: Paul, Gordon, Margaret, Timothy, time to eat, come in now and wash up. It’s a bit like herding cats as the saying goes, but the entire family slowly converges around the long table and sits down. There’s lots of banter, conversations left and right, a towering Babel of voices.

“And then the doorbell rings. The clatter of eating utensils abruptly halts, and all eyes turn towards Grandma: Are we expecting someone else? Jane’s husband, Benjamin, dabs at his mouth with the cloth napkin, pushes back his chair, stands up, and goes to see who it is. He returns a moment later, an older man, rather small and slightly stooped, at his side. The new arrival doffs his cap, grins and says hello. Everyone at the table sees that he’s oddly dressed, but it’s nothing anybody can put into words. There’s a moment of silence, and then Grandma half stands. A smile dawns across her face. Well, well, it’s you, isn’t it? Yes, it’s me, the man replies, still grinning. Would you care if I sat down? There’s a bit of whispering at the table: Who’s that? Grandma doesn’t answer them. Make some room for him between the children, please. Two of the kids scoot their chairs to either side, and a chair is brought in from the parlor. I trust you’ll only want some sweets? Grandma says. Yes, the man answers. Just a slice of cake. A big slice, as always. Grandma laughs: Coming right up. By the way, how’s Michael? He says. From the kitchen, Grandma replies. My brother? Some arthritis, but fine otherwise, thank you.

“One of Grandma’s sons, Ralph, is the first to address the unexpected guest. So you’ve known Mother a long time? The old man only smiles (is he senile, thinks Lizzie) and slides a piece of lemon meringue into his mouth. It’s Grandma who answers. Yes, Ralph, in fact we have, since we were kids. This boy, she chuckles, this man even showed me how to climb trees when I was young. One of the great grandchildren laughed. That’s funny, he said. Not as funny as you might think, the old man said, I could show you how as well, and at the same time he slipped a piece of cake to the sheepdog who’d come up and nuzzled him. The dog likes you, said Grandma’s daughter, Jane; she’s not often that friendly. Oh, animals simply adore me, the fellow said with a light, lilting laugh. He winked at the children and patted the dog on the head. The rest of the meal continued, although the bantering was more subdued than before.

“Why? Was the old man dangerous?” said Minolta.

Jô Soares laughed. “Well, that all depends. When everyone was finished eating, and dishes were being stacked up on the counter next to the sink, Grandma rinsed her hands and dried them on her apron, which she then removed and hung by the stove. Then she walked over to the hall closet, opened it, and emerged with a modest traveling bag, a scarf and a coat. The old man pushed back his chair and got up, nodded to the others, held out his hand, no one took it so he shrugged, smiled enigmatically (and not for the first time), and joined Grandma in the foyer. Wait, is she leaving with him? someone said, and suddenly confusion mingling with consternation swarmed through the room. Yes, we’re headed out, Grandma said, adjusting her hat, now come kiss Granny goodbye, and you children there, behave yourselves while I’m away. Mom? What’s going on? Mom! Grandma wordlessly dispersed kisses. Now, now, don’t fret. She opened the front door and everyone could see the banged-up yellow taxi idling by the curb. As soon as the driver saw them he stepped from the cab, hastily brushed and straightened his dark blue uniform, and opened both rear doors. The old man took Grandma’s arm and walked her down the flagstone path that crossed the lawn, and then the cabbie helped her in the car. The cab driver assisted the old man inside as well.

“A moment later, as the extended family now scrunched together on the front porch looked on in astonishment, the taxi sputtered away. Come on, said Benjamin to no one and everyone, this is suspicious, they could be kidnapping her. His wife put her hand to her mouth to stifle a cry. Oh dear Jesus! Meanwhile, Benjamin had hopped into his car, along with Ralph’s wife Victoria, and quickly sped off to tail and trail the taxi.”

“Not what I was expecting,” said Marcio Souza, “but let’s hear it out.”
“The taxi puttered through town, darted past roundabouts, crossed railroad tracks, an old trolley line, and halted at the docks by the river. Shit, shit, shit, said Benjamin from a distance, not a good part of town. The cabbie helped the elderly couple from his vehicle, handed them their belongings, hurry, hurry, and watched solicitously as, arm in arm, the man and woman slowly made their way across the wooden boat ramp until they arrived at a ratty-looking yacht. They were about to step on board when first one car and then another slammed on their brakes, and numerous figures, men, women, and children of all ages, bolted out of all four doors and ran towards Grandma and the man abducting her.

“Mom! Mom! The voices flew into the air like startled birds. Mom! Do you know what you’re doing? Grandma, who already had one foot on the edge of the boat, creaking and slightly bobbing in the tide, smiled but didn’t raise her voice. Oh, dear me, of course I do, she said; this isn’t the first time I’ve done this. The others looked at her, perplexed. What other time? The old fellow stomped his foot like an impatient child, and reached for Grandma’s hand. Wendy, he said, shall we? Now she had both feet inside the boat and was carefully helped into it. She sighed. I’m not as sprightly as you, she said. With pitiful looks on their faces, her family drew closer. The cabbie, leaning back against his car, enjoying a cigarette, looked on and smiled. The old man quickly unmoored the boat and with his foot kicked it away from the dock. It began to flow into the current that would take it down to the sea. How helpless they all look, Wendy said as she unpinned her hair and shook it loose. And, good gracious, Peter, where on earth did you find that old man’s outfit? You even fooled me. But Peter was sitting at the tiller and humming, steering with one hand and with the other shielding his eyes from the setting sun, looking for the alignment of the crescent moon and the evening star as the boat gently disengaged itself from the water and drifted into the sky. ER