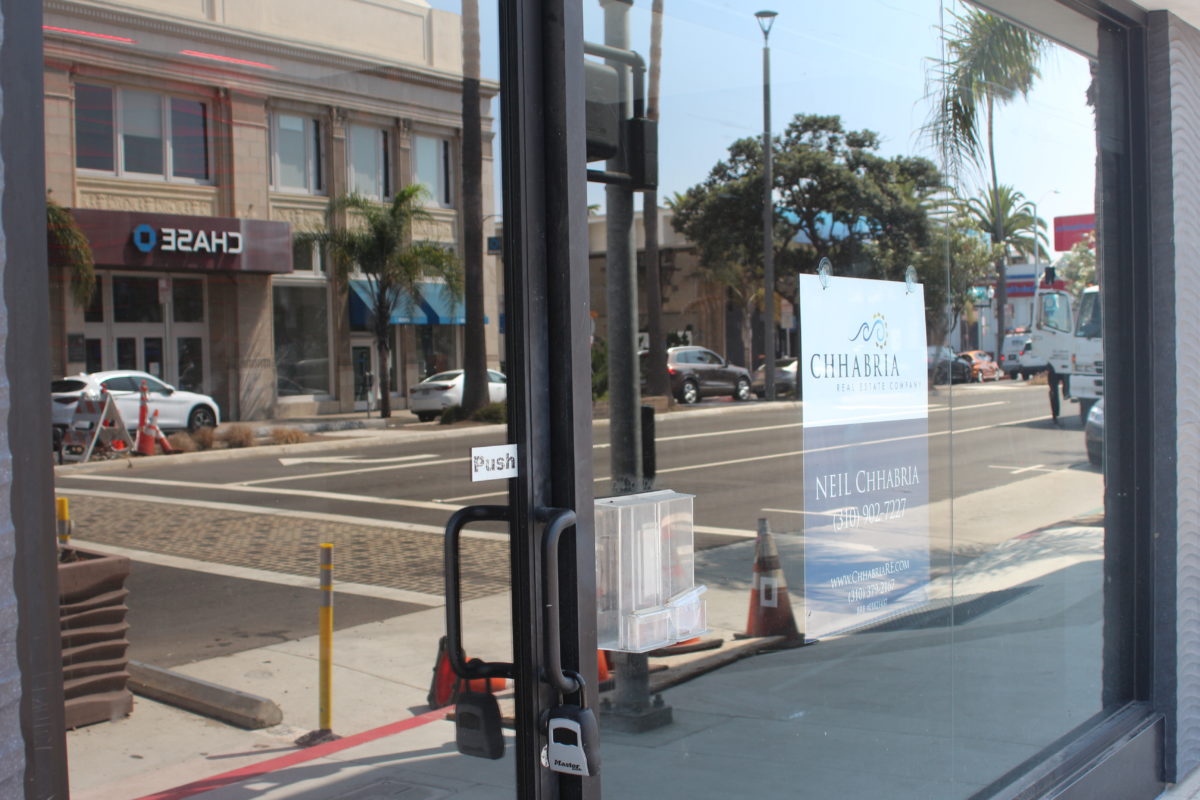 Across the United States, the coronavirus has made packed restaurants and carefree urban mingling impossible. In Hermosa Beach there is hope that in the long term the pandemic may lead to a city center that is more bustling and attractive to businesses than the version that preceded it, as well as fear that things will get worse before they get better.

In a meeting this week of the city’s Economic Development Committee, a body created to reckon with the turmoil COVID-19 has wreaked on the city’s business climate, officials received grim predictions about the immediate future of commercial real estate in the city. While contraction is inevitable from a pandemic that, nationwide, has killed more than 180,000 people and thrown 30 million out of work, some business owners and real estate watchers suggested that Hermosa’s path to recovery may be stymied by zoning and building code provisions, and the ideas about parking, transportation and density they embody.

Jon David, a commercial property owner in the city, described the city’s parking code as “crippling” for potential investors, and pleaded for relaxed standards for mixed-use developments that could allow, for example, more apartments above commercial spaces. He suggested that hesitancy to embrace these changes was rooted in deference to a segment of the city’s resident base that was especially vocal but no longer representative of Hermosa’s shifting demographics.

“You can’t tell me that those people don’t want more outdoor dining, they don’t want more density, they don’t want more social interaction,” David said of more recent arrivals in Hermosa, who over the past decade have caused residential property values to skyrocket. “I just think that what we’ve been doing is maybe based on some old ideas and some scars from the past.”

Mayor Mary Campbell said that by allowing the city to embrace ideas that earlier would have been politically difficult, the pandemic had shown that things like expanded outdoor dining wouldn’t necessarily lead to “the worst version of frat party on the plaza.”

“It’s almost become a mindless way to stiff-arm every idea,” Campbell said of past reflexive opposition.

Tony Cordi, president of the Innate Group, a South Bay real estate firm, and a member of the committee’s stakeholder advisory group,  told the committee in a presentation that at least 19 spaces are or soon will be available along Hermosa Avenue, the city’s main commercial strip, far more than he is predicting for Manhattan Avenue in Manhattan Beach, or Catalina Avenue in Redondo Beach. (In the past, Cordi contributed occasional columns on real estate issues to the Easy Reader.) Although some of those are from developments that were long in the making and have the misfortune to be opening in the midst of a pandemic, others, such Bionic Body and Outpost 406, have shuttered with the downturn. In some instances, the presence of commercial vacancies can have a compounding effect, with a smaller number of businesses drawing fewer people to the area, making it harder for existing businesses to survive.

Cordi, who said he has between 20 and 25 commercial tenants in Hermosa, predicted that “empty storefronts and folded businesses” threaten to become a serious problem for Hermosa in the immediate future. Over the past few months, plunging revenues have made it challenging for businesses to keep up with rent. The County of Los Angeles imposed an eviction moratorium for commercial operators in March, and has extended it several times, but the current order expires Sept. 30, and it is unclear if it will be extended again. While some tenants have managed to get by with help from federal stimulus measures, the fate of any renewal is uncertain. Others, Cordi said, have been able to work out rent deferral or reduction agreements, but the next few months may be less forgiving.

“A lot of people who buy property, who invest in property here, tend to be highly leveraged. There’s been some grace and generosity, some willingness to work with tenants who are going through some crazy difficult times,” Cordi said. “This is obviously on a case by case basis, but I think eventually there’s going to be a breaking point, where you just can’t keep doing it, it doesn’t work. At some point, you’re not going to be able to pay on the loans. There’s extraordinary pressure building up on the ownership side of things.”

Cordi implied that the pandemic may have accelerated a process of Hermosa choking on its own success, one in which the dizzying rise in residential real estate prices have pushed up the speculative value of land to a level that the current business climate was having trouble sustaining commercial rents. He was hesitant to offer prescriptive suggestions but was frank about shortcomings he saw, particularly for a speaker invited by the city. At various points he said he was struggling to lure certain kinds of restaurants to vacant commercial spaces because of a perception that Hermosa was a difficult place to do business, with onerous operating conditions that were expensive and time-consuming to change.

Whether or not these potential clients are correct, Cordi’s observation suggests how difficult it may be for the city to find a way forward. Controlling the impact of downtown Hermosa’s occasionally raucous nightlife has been a guiding principle of the city’s politics for years. Some residents placed a measure on the ballot to limit the late-night hours of bars, which failed, but later citizens managed to convince the City Council to cap the number of late-night, full-liquor businesses. In other instances, the permit process has limited the type of seating, hours of operation, and other measures of alcohol-serving “intensity.”

Pete Hoffman, a member of the economic development committee and a planning commissioner in the city for two decades, noted that he was on the body that imposed many of those conditions. He recalled the “intense” resident opposition that accompanied the redevelopment of Upper Pier Avenue, which led to operating restrictions on the properties that endure today.

“All of those establishments are conditioned that way because people were so viciously opposed to sidewalk dining,” Hoffman said. 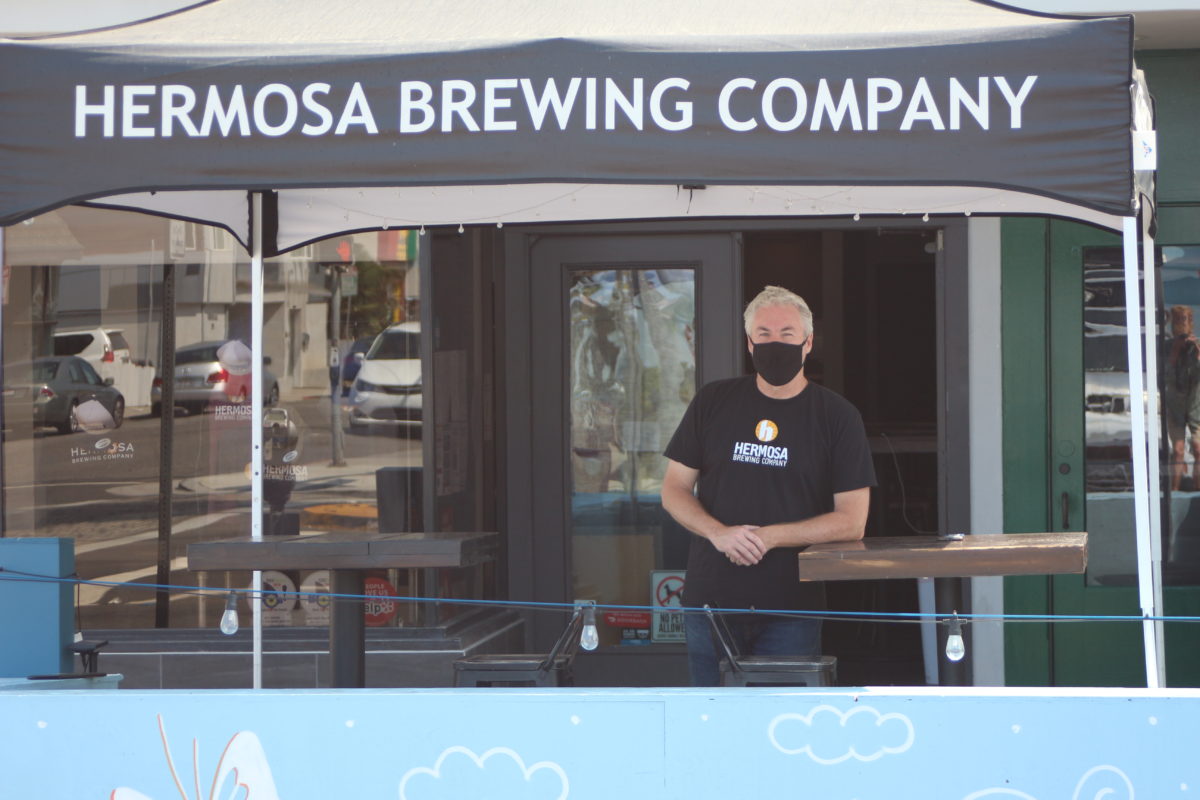 Dave Davis, owner of Hermosa Brewing Co., in a dining deck outside his Hermosa Avenue establishment.

Hoffman and Cordi agreed that businesses were struggling to keep up with rents in downtown Hermosa, but appeared to draw opposite conclusions from the gulf. Hoffman said high rents pressured businesses to maximize high-margin alcohol sales, and said past caution about liberal operating conditions had been inspired by examples of operators taking advantage of every possible loophole.

“I can’t tell you how many times we approved an Asian fusion restaurant, then had my students telling me how much they enjoyed the stripper pole there,” said Hoffman, who is a professor of geography and urban studies at Loyola Marymount University.

Cordi, however, suggested that was not inevitable, pointing to neighboring Manhattan. Although residential property values in Hermosa have gained ground on those in their neighbor to the north over the last decade, Cordi said, they have fallen farther behind in commercial property values, with tenants in Manhattan able to generate far higher revenues per square foot. Rents are much higher there, Cordi said, but tenants appear to have less of a problem paying them. The tenants making those rents, many of which have arrived within the last five years, are not watering holes targeted at recent college grads, but en vogue restaurants that are often fantastically expensive.

Manhattan’s formula for success —  attracting a hip yet moneyed crowd with “chef-driven” dining — increasingly resembles the one adopted by other hot spots like Abbot Kinney or downtown Culver City, and touted by the same urban consultants pushing mixed-use zoning and bike lanes. As Campbell and others acknowledged, Hermosans are unlikely to support any plan driven by a desire to be like some place else.

Past efforts at crafting an orchestrated vision for the Hermosa’s downtown, like the Downtown Core Revitalization Strategy, known as the “Roma Study,” have been considered by the council but failed to produce lasting transformation; speakers at public meetings occasionally deride them as the bookish doodlings of outsiders. The changes wrought by the pandemic, on the other hand, have tended to be improvised, homegrown, and practical, even if they do bump the car down a few pegs, and let late-night laughter echo in the streets.

On a recent morning, Dave Davis, co-owner of Hermosa Brewing Co, was adjusting the poles of a pop-in on the dining deck his restaurant shares with two other eateries in the same building. The dining deck, which will soon double in size after the city closes lanes in each direction on Hermosa Avenue, came about after Community Development Director Ken Robertson reached out and asked Davis if he’d be interested. To Davis’ surprise, approval came swiftly.

The dining deck allows him to seat half the capacity that he has inside the restaurant, but so far it has been a boon, going far beyond providing revenue at a time when indoor dining remains prohibited by the state.

“While we love our little footprint in here, it was hard to convince people that we were something special. Once we put this out, we’ve had so many people that have come by,” Davis said. “Our regulars have come by, the ones that feel comfortable going out to eat. But we’ve also had lots of people say, ‘I’ve walked by here for two years, and this is our first time here.’ We’re discovering a whole new clientele.”

Outdoor dining is attractive, Davis surmises, because it gives people what they are looking for when they go out in coastal cities like Hermosa, a characteristic the pandemic hasn’t changed. But asked if he could have imagined getting approval for an outdoor patio before COVID-19, Davis laughed.

“[The pandemic] made it happen so quickly, it proved to people that this has actually improved our way of life in Downtown Hermosa,” Davis said.

As of now, changes like lane closures on Hermosa Avenue will be around for at least six months. (Consideration of lane closures on Pier Avenue will take place at the City Council meeting next week.) They could be clawed back if public health conditions improve. They might also become permanent, fixtures as impossible to imagine disposing of as the Greenbelt or The Strand.

“To even consider taking away outdoor seating would be a huge blow. I think we’re going to live outdoors for quite some time,” Davis said.