“Witkin and Witkin” -The wit of it all [MOVIE REVIEW] 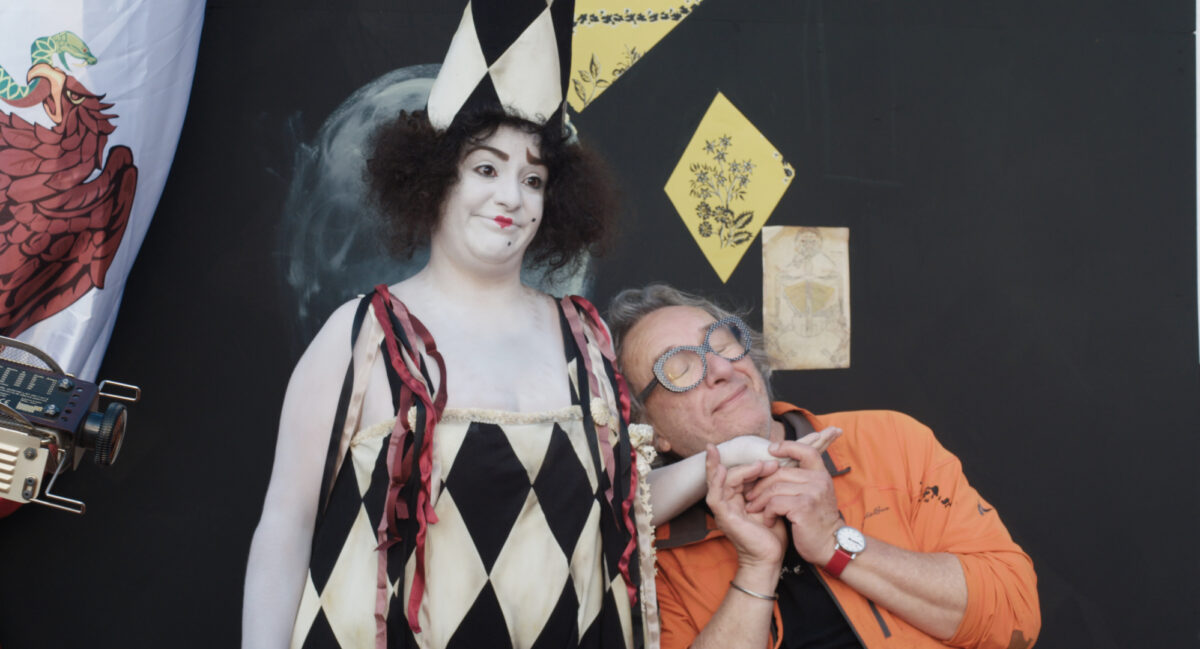 Joel Peter witkin and one of his favorite models in "Witkin and Witkin." Photo courtesy of Indiepix Films.

Joel Peter witkin and one of his favorite models in “Witkin and Witkin.” Photo courtesy of Indiepix Films.

Trisha Ziff, no stranger to the art world, should gain more fame with the release of her outstanding documentary on Joel and Jerome Witkin entitled eponymously “Witkin and Witkin.”

I have known of Joel-Peter Witkin’s work for almost 30 years because a close friend collected his photography. It was the most graphically bizarre work I had ever seen, beyond, in many ways, that of Robert Mapplethorpe. A particular target of Jesse Helms when giving reasons why the NEA should be defunded, Joel loves the unloved and the physically abnormal. Some of his most famous, or infamous, photos are of beautiful naked transsexual women who have not completed the final surgical procedure, vaginoplasty. Usually staged dramatically, some on crucifixes, others in the guise of Renaissance Madonnas, they are haunting and memorable. Joel focuses on those at the margins of society much like Diane Arbus did. Arbus’s subjects were from the edge of an unaccepting society that tended to underscore how and why they didn’t fit in. Her camera found the humanity in the men, women, and children that they didn’t receive in their surroundings. Joel, too, gravitated toward the bizarre and rejected but his photos revealed their indifference to their rejection, resonating with a beauty that the viewer had never before contemplated. He would stage his shots with the maimed, disfigured, and unattractive in such a way that his subjects revealed a pride in who they were rather than what they looked like. Both photographers found beauty where others found ugliness but Joel went a step (actually many steps) farther in gravitating toward those way beyond the margins. 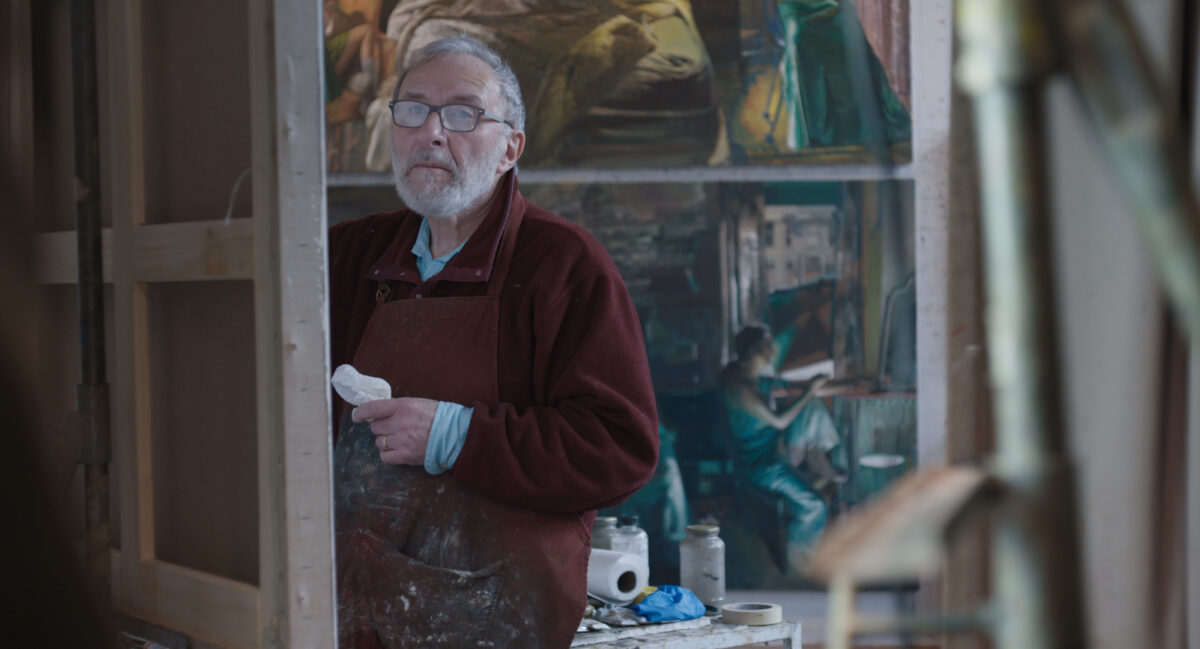 Jerome Witkin in his studio in “Witkin and Witkin.” Photo courtesy of Indiepix Films.

Jerome Witkin, a painter, was an artist I didn’t know. A social realist painter who combines elements of Edward Hopper and Lucien Freud, Jerome paints the disenfranchised of recent history’s violence, be it the Holocaust or the Syrian Civil War. He captures both pain and hope in the eyes of his subjects, revealing portraits of incredible depth.

Jerome and Joel are identical twins. Unlike most twins, they have had very limited personal contact for over fifty years. It’s complicated and something neither man is able to fully communicate. Raised in Brooklyn primarily by their mother and eccentric grandmother, as children they were inseparable, dressing alike as most twins of the day did. There is no doubt that the chaos at home accentuated by the divorce of their parents had an influence on their futures. Because Jerome’s artistic talent manifested itself very early, he was seemingly favored by their mother, something that did not go unnoticed by Joel or their sister. By the time Jerome was fourteen, he was invited to enter the High School of Music and Art in Manhattan and from there he received scholarships, prizes, and invitations to study at some of the most prestigious international schools. He was soon exhibiting in New York galleries. His solo shows, international recognition, and introverted personality no doubt contributed to the estrangement between the twins.

Joel’s career took longer to launch although the seeds were there in the childhood he shared with Jerome. They would often go to Coney Island where Joel was mesmerized by the freak shows. Even before he knew that photography would be his path, he began taking pictures of Albert Alberta, half man, half woman. As his prowess with his Pentax grew, so too did his interest in those who were different. He saw beauty in them and one of the reasons the photographs are so successful is because they emphasize the depth and humanity of his subjects. When spending time contemplating his transsexual photos, you will see the respect and love he has for these women.

It doesn’t seem likely that it was animosity that drove a wedge between the brothers. It’s fascinating that identical twins would be so distant. They are both artists and in a fascinating way, they are illustrating society’s disenfranchised almost as morality plays. What is unusual is how different both are from the standpoint of personality and this, no doubt, accounts for their distance. Each is wary of the other but not hostile; the introvert and the extrovert. 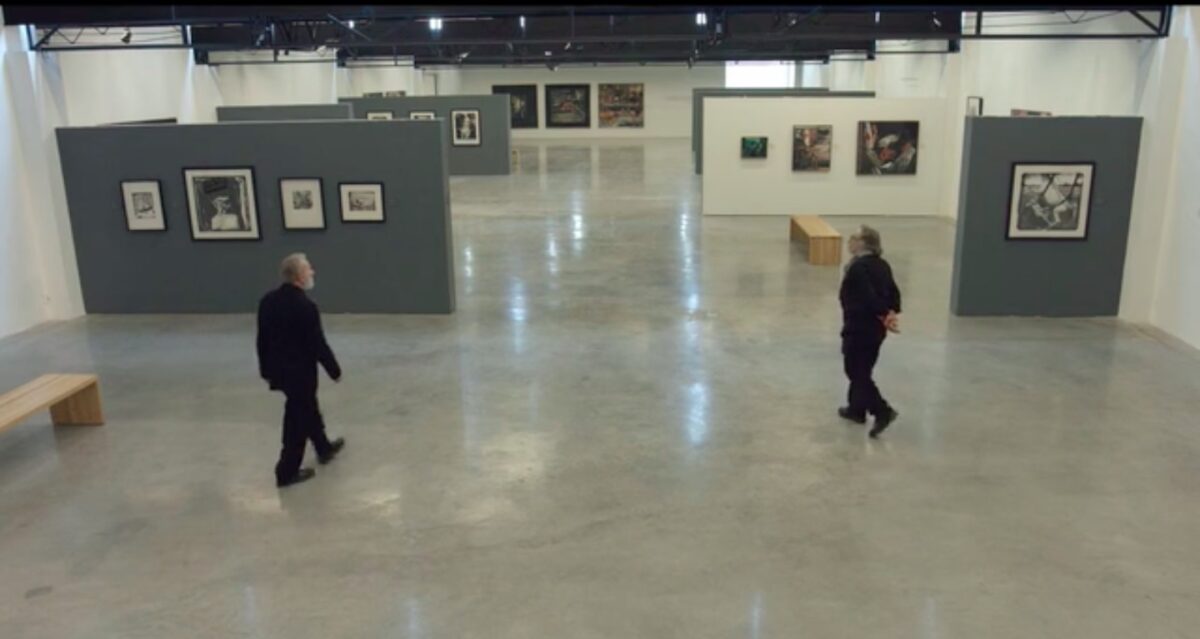 Jerome and Joel Witkin at the Foto Museo Cuatro Caminos of Mexico City in “Witkin and Witkin.” Photo courtesy of Indiepix Films.

Filmed over a period of four years, it is the art exhibit in Mexico that brought them together after more than fifty years entitled “Witkin & Witkin” at the Foto Museo Cuatro Caminos of Mexico City in 2016. Ziff interviewed family members, collectors, and both artists over a period of several years. Interestingly, she gives us a view into the soul of the art, leaving both artists mysterious.

Conjoined at a young age, separated by artistic circumstance in their teens, each has carved an individual path. There is no indication that they will draw closer in old age, only that each has an appreciation for what the other became, alone by choice.