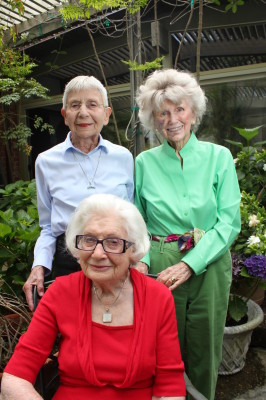 GOT IT DONE
Pictured left to right, Dina Friedson, Barbara Gleghorn and Betty Field Strauss were among the women who led efforts to incorporate Rancho Palos Verdes in 1973. Photo by David Rosenfeld

This Fourth of July, the City of Rancho Palos Verdes not only celebrates the birth of a nation, but the birth of a city. Forty years ago, a group of tenacious women led efforts to incorporate one of LA County’s last untouched coastlines and form what is today RPV.

It didn’t come easy, recalled Betty Field Strauss, Barbara Gleghorn and Dina Friedson, three of the original members of the effort spearheaded at the time by the League of Women Voters. The three reminisced recently about what the coastline may have resembled had they not succeeded and how far the city has come in the decades that followed.

“If the county had continued to have control over development, Abalone Cove and Lower Point Vicente would have been developed as would much of the Portuguese Bend landslide area,” said Friedson, who did much of the research at the county recorder’s office.

At the time, Friedson made the 21-mile trip downtown frequently to look up records. Since it was before the days of copy machines, she hand-copied details of the zoning records. And what she found shocked her fellow residents, who envisioned huge hotels like in Miami Beach sprouting up along the cliff side.

“Most of that coastline was open space and county planners had put a hold that could have allowed very heavy density with hardly any limits,” Friedson said. “Depending on the size, on some of the larger parcels they could have had buildings up to 74 stories tall. It would have been very bad.”

In 1967, league members began canvassing the neighborhoods and educating their fellow residents about the need for incorporation and greater control over development. Some of the ladies pushed baby carriages as they walked house to house.

“Most of the men worked off the hill, and so they didn’t particularly want to go to meetings. So we decided we needed to be the ones who helped raise people’s consciousness,” said Field Strauss “The women really responded. They were wonderful and we all passionately cared about it.”

The women’s group of course had some help from noteworthy men and other community groups including Fred Hesse, Ernie Howlett and the non-profit Save Our Coastline. Later the Palos Verdes Peninsula Land Conservancy helped take up the mantle of preserving open space.

“We were fighting the [Board of] Supervisors who really had an old boy’s network,” Gleghorn said. “So we had zero influence on the planning commission and among the supervisors. They were nice guys, but the idea that one could influence open space and control your environment really didn’t take place until Save Our Coastline came along.”

At the time in the late 1960s, women’s involvement in politics wasn’t the most comfortable thing for some people though they can only recall a few instances where someone publicly objected. Capping their achievement, Marilyn Ryan, the League’s former president, was elected the first mayor of RPV and later went on to become an assemblywoman.

“The women really did most of the work,” Gleghorn said. “In the beginning we knew we had to unite the peninsula behind the effort. We had to draw the political parties and the cities together and sell the public because people, like now, don’t really tune in to what’s happening, so it just took a lot of educating.”

When the group first appealed to the county to grant incorporation they were rebuffed because greater weight was given to votes based on property values. Local attorney Jim Herbert appealed the case to the California Supreme Court and won. The incorporation then went to the voters and in 1973 roughly 88 percent of the residents approved.

“Now, 40 years later it remains the responsibility of city officials to remain ever vigilant about preserving the dream of maintaining a high quality, low density environment amid the most acreage of open space preserve in the South Bay and throughout most of greater LA,” Brook said. “We are truly blessed to live in the paradise called Rancho Palos Verdes.”

As for the ladies that helped get it all started, they say they’re extremely pleased.

“The edge of a continent is irreplaceable,” said Field Strauss. ER