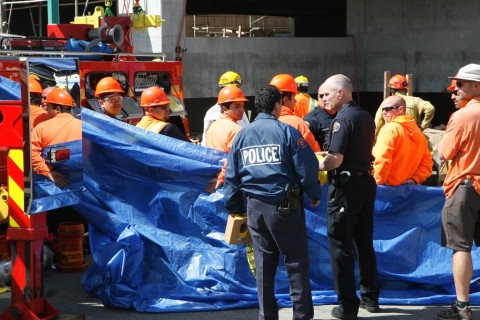 Workers prepare to lift a tarp to shield the public's view of the recovery of a body from the site of a construction accident. Photo

A worker was presumed dead Wednesday morning after he fell into a trench that apparently collapsed around him, burying him in loose dirt, at a large building under construction at Cypress Avenue and Sixth Street, in a mixed commercial-industrial area near South Park.

The man, who was not immediately identified, had been working to install a beam or girder when he plunged head-first into the loose dirt, coming to rest with only one foot above ground, firefighters said.

“His coworkers attempted to rescue him, but the dirt was so compacted they couldn’t pull him up,” Hermosa Beach Fire Capt. Mike Garofano said.

Hermosa firefighters were called to the scene about 10:30 a.m., and called upon Los Angeles County Urban Search and Rescue to recover the man’s body.

Suffocation quickly kills people trapped under tight-packed earth, and the man was presumed dead as rescue workers, county firefighters and Manhattan Beach firefighters began the work of extracting the body from the earth.

Also on hand were officials of the California Occupational Safety and Health Administration, which investigates workplace accidents.

Two and-a-half hours after the accident firefighters were using a flexible hose about the diameter of a basketball to drive either air or water into the earth to loosen it up so the body could be extracted.

The hose was operated from a “heavy rescue vehicle,” looking like an enormous fire truck, which was backed up to the site of the accident.

Two rescue workers wore harnesses and stood ready to be lowered some 10 to 15 feet below street level to the site of the accident, to free the worker’s body and help hoist it up from where it lay.

The partially completed building is being erected by Shaw Engineering and Construction. Documents at City Hall describe it as a two-story multi-use manufacturing building, and officials said Dave Shaw plans underground parking for trucks and other vehicles, with offices above. ER