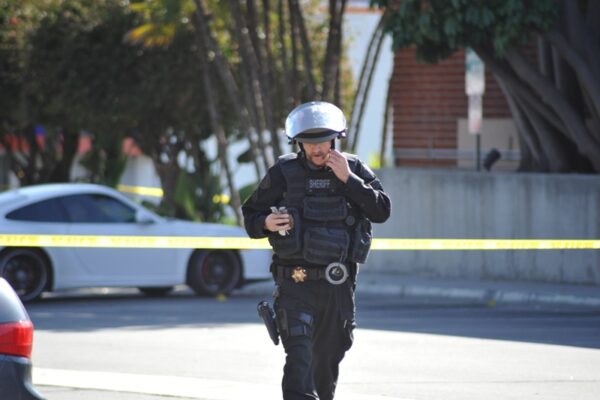 Los Angeles County Sheiff’s Department Bomb Squad officials were called to the Hermosa Beach City Hall after a resident brought a grenade to the station after finding it in his grandfather’s WWII collection. Photo by Chelsea Sektnan

Hermosa Beach police got a surprise Wednesday afternoon after a man driving a white Porsche drove to the police station to drop off a hand grenade he had found in his grandfather’s box of WWII memorabilia.

Officers acted immediately by evacuating City Hall and the surrounding buildings as well as advising local schools to divert their students around the affected area. Jeff Wolfe, the Hermosa Beach resident who found the explosive, was told to hand over his keys while the police department called in the Los Angeles County Sheriff’s Department Bomb Squad. 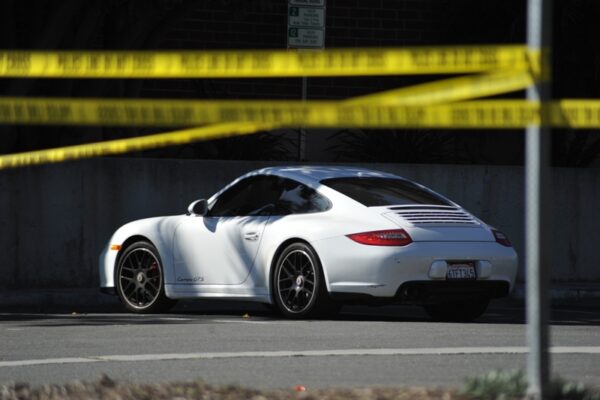 The bomb was brought in by a resident driving a white Porsche. Photo by Chelsea Sektnan

Officers lamented that the bomb was in a Porsche and not another kind of car like a Pontiac Aztek.

“The older they get the more unstable the powder is,” said Interim Police Chief Steve Johnson. “He was a nice well meaning guy, but we have to have caution.”

HBPD Sgt. Robert Higgins said in a press release that the grenade did not appear to be a paperweight, and all indications were that it was live.

“My grandfather recently passed away and I was going through his WWII stuff and, there’s a hand grenade!” Wolfe said. “I didn’t know if it was real or not, so I brought it here. You never know.”

By 2 p.m. the bomb squad was on the scene and had extracted the pineapple grenade from the vehicle. They immediately determined that it wasn’t active and confiscated it with the intent to destroy it later.

“It was a legit WWII grenade,” Johnson said. “All the powder’s out of it and the igniting source was removed.”

Wolfe asked if he could keep the memento, but he was denied. 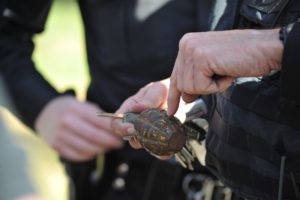 The grenade was determined to be empty and the bomb squad took it to be destroyed. Photo by Chelsea Sektnan

“We don’t want it to end up in the public where we have to respond to it again,” said Johnson.

Wolfe explained that when his grandfather came back from the war he was allowed to bring back the explosive trinket. He also found uniforms and a service pack in the memento chest.

“Nobody got hurt, and the car’s still intact,” said Johnson, as the white Porsche pulled out of the parking lot and drove down the road.