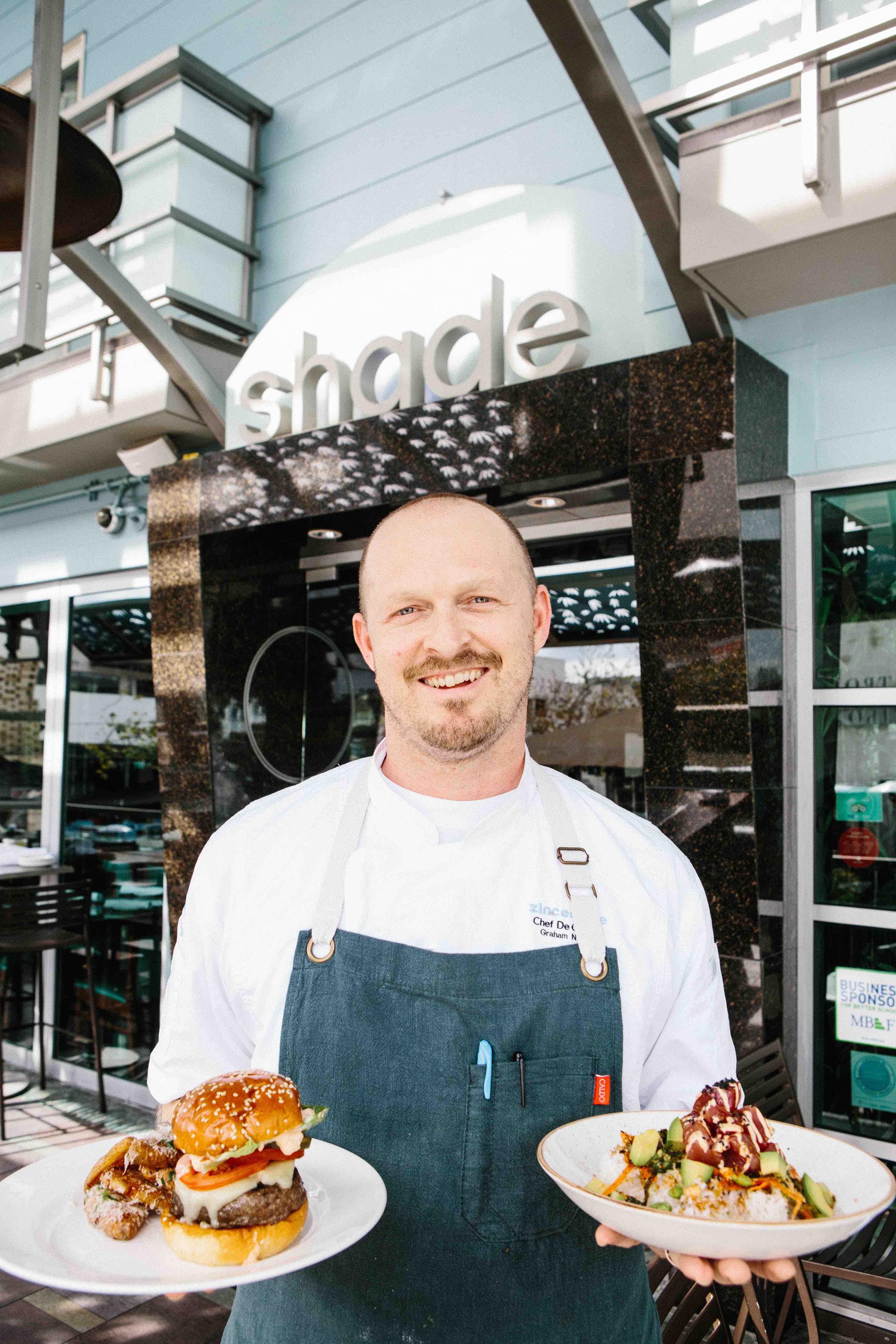 Some places chase trends, some start them, and some ignore them. Any of these strategies can be successful depending on how well they’re executed and how well they fit the local clientele. If you look at the 300 block of Manhattan Beach Boulevard there’s a coffee shop that has gradually upscaled with the neighborhood, a bar and grill that hasn’t changed much since they opened decades ago, and a place that is at the cutting edge of dining trends. They’re all doing well on any given night.

Right around the corner in Shade Hotel is a restaurant that has slowly transitioned to fit its environment. Zinc at Shade opened with a lounge atmosphere and high concept food, mostly California modern small plates. They did offer a somewhat conventional breakfast, but after that it was all eclectica, all the time. When Chris Garasic took over the kitchen in 2015, he organized things in a slightly more conventional manner, including actual dinner entrees. You could still get sashimi and follow it with Thai curry and churros, but that was still a step toward something resembling the style in which most Americans dine.

About a year ago a new chef arrived at Shade, though he wasn’t an outsider. Graham Norton had been at The Strand House, which is also managed by the Zislis Group but has a different style. He has had a year to put his stamp on Zinc, and the menu has been almost completely transformed. It’s still interesting but is another step away from the hyper-eclectic style of earlier days.

Zinc is located inside a hotel, so it serves early breakfast through late dinner, and predictably the breakfast menu is the most traditional. Even those who are wildly experimental later in the day like to start with something that has at least some resemblance of tradition, so French toast, waffles, eggy things, and a breakfast burrito are all on the menu. (So is a pretty spectacular looking version of avocado toast that we didn’t order, but wished we did after seeing one go by.) My wife and I were in a Mexican mood when we stopped in so we got a breakfast burrito and huevos rancheros with an Irish coffee and a cocktail of rose wine, Champagne, St. Germain, and lemon. Their bar staff is solid even at breakfast and the drinks were fine. So were the huevos rancheros, which had a mildly spicy housemade sauce with some depth of flavor. I wasn’t as pleased with the breakfast burrito, which was lacking a similar zip. It had been made with soft breakfast potatoes rather than the hashed browns listed on the menu so didn’t have the expected crispness, and while all the individual ingredients were of high quality it was a bit bland. Were I to order it again I’d ask for a dollop of ranchero sauce and melted cheese over it, but I’d be much more likely to order that avocado toast, instead. 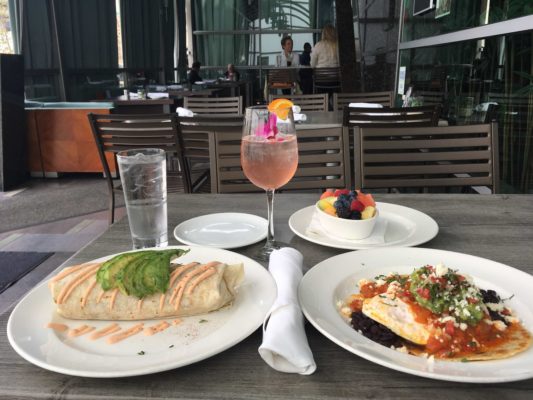 On that trip we dined on their shaded patio, which is great for people watching on the plaza, but on our return for dinner we dined inside. This used to be problematic because the lounge-type furniture wasn’t designed for eating, but they now have conventional tables, too. The sound level, which used to be very high, has been lowered, and it’s altogether more pleasant than it was in past years.

The selections at dinner are wide-ranging yet coherent – rather than a one-of-everything approach there was a definable culinary aesthetic throughout. We started with the soup of the day, pea puree topped with micro-greens and accompanied by toasted bread. Though this is the kind of starter I’d expect to see in midwinter rather than late spring it went down easy, because simple vegetable goodness is welcome any time of year.

Our other starter was a “loaded avocado,” the halved fruit stuffed with blue cheese, crisped prosciutto, green onion, and sour cream ranch dressing. This was the only item of our meal that just didn’t work, because as much as I like blue cheese and ranch dressing, like avocado they’re both fatty and rich, and some contrast in flavor and texture would have been more interesting. It was served with tortilla chips, which are great with guacamole but pretty useless in dealing with even a ripe avocado. We chopped it into chunks and mixed it together, and it was okay but not up to the standard of the rest of the meal.

For our mains we chose seared scallops, a “Tex-Mex” pizza with carnitas, black beans, and ranchero sauce, and a fried chicken sandwich. The pizza was a hit, the cotija cheese, cilantro, and green onion helping make this a Mexican meal on a crust. The fried chicken sandwich was more conventional, though the lime zest honey aioli added a little hit of citrus and spice. The housemade pickles added a snappy tart crunch that balanced things nicely, and if an upscale version of a fast food favorite sounds good to you, this is it. Try it with the sweet potato fries on the side, because they are unusually crisp and light.

The hit of the dinner for me was the scallops, which were served with lightly cooked cauliflower, peas, and frisée over a carrot-curry puree. Frisée is referred to as a lettuce but is actually in the chicory family, and the slightly bitter green is a great foil for unctuous flavors like scallops and sweet carrot. Everything about this dish works – you taste the natural flavors of the seafood and vegetables with subtle, sophisticated accents.

Since Shade opened they have been noted for wine events, and Zinc has the selection to match – they pour Stag’s Leap Chardonnay by the glass, which isn’t something you see often. That went nicely with the scallops, and my companions approved of the cocktails they enjoyed with their meals.

We had just enough room to share a dessert so at our server’s recommendation ordered their seasonal peach cobbler, which was served in a little frying pan. The fresh fruit was in a crust that resembled a good cinnamon roll, and it made a light, sweet finish to a good meal.

The service at Zinc is excellent, the price about what you’d expect in downtown Manhattan Beach – breakfast for two with one cocktail each ran $67. Dinner with a cocktail each and one glass of wine $160. While I enjoyed the unlimited creativity of some of their previous menus, this one suits the location very well. They are a restaurant in a hotel so must offer something for all tastes, but they’re in Downtown MB so must do that with flair. They have the balance just about perfect.