Reality and illusions on the Pier Plaza 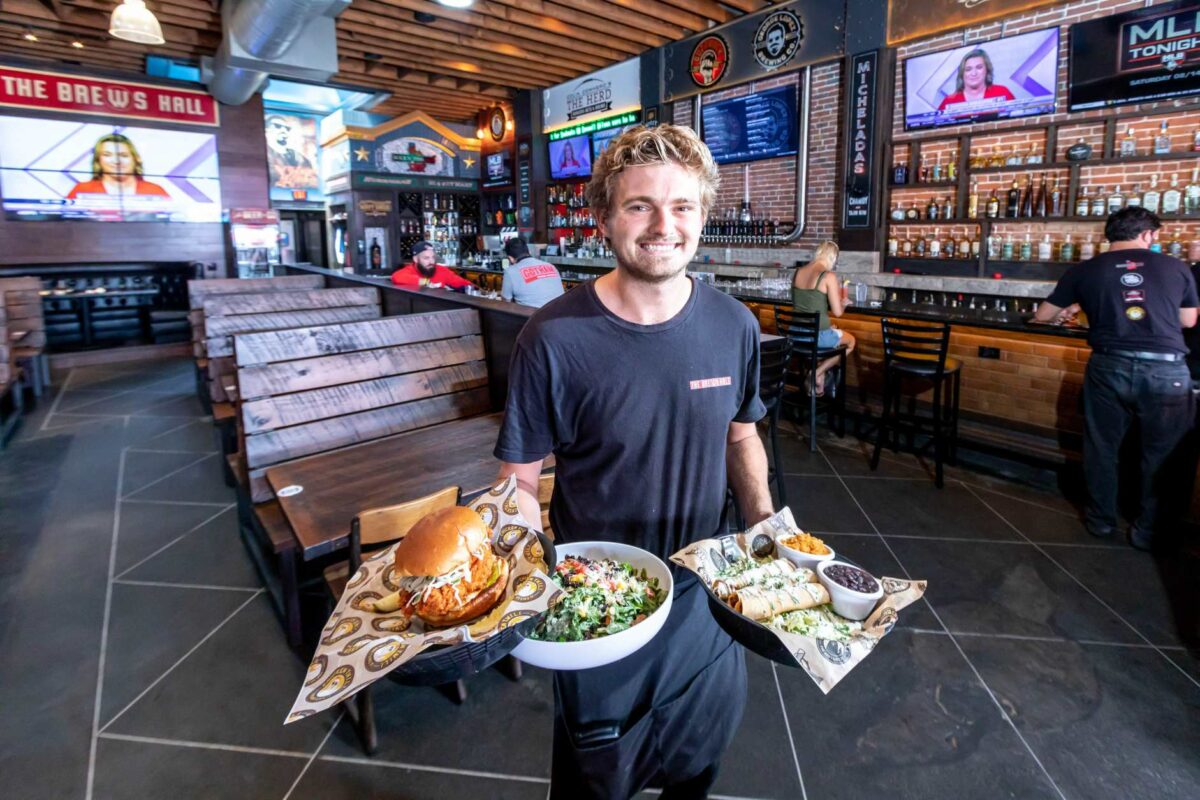 A few months later, Brews Hall is usually well attended any evening of the week, so apparently locals really do have an unlimited appreciation for bar food. It probably doesn’t hurt that some menu items here are branded with the Rockn’Fish name, because that Manhattan Beach establishment has been turning out upscale bar food for two decades. That’s actually a minority of the offerings here, though, and the menu is segmented into sections with different brands as though you’re in a mall food court. It’s a mall from a slightly different universe, though, because instead of the established players there are eateries like Chicken TWILI, Colin Cowherd’s Herd Burger, and George Lopez’s Chingon Kitchen. Never heard of those? Neither has anybody else, because the first two exist only in Brews Hall locations, and the third has two locations at Indian casinos.

Odd brands aside, how’s the experience? Service is brisk and professional – on four separate visits someone was at our table to drop off a menu and waters within minutes of arrival. The menus are available on plastic-coated cards or online using a QR code, and as always, the descriptions are more complete on the menu. One addition in particular should be made to the online version, the warning that the fries and onion rings are not vegetarian. (They’re cooked in beef tallow, which the best fish and chip shops in Britain do because you can crank up the heat without it scorching and get a crisper french fry. Those who love crisp fries will appreciate this, vegetarians won’t. Neither menu mentions that if you want vegetarian fries those can be special ordered, because they have another fryer with canola oil.)

The fries are quite good, but a different fried item is on my must-have list, the crispy calamari. Calamari doesn’t have a lot of flavor so you notice when it is crispy and nicely seasoned, which this is – there’s a bit of pepper and herbs, and it goes well with the fresh tartar sauce and cocktail sauce. If you want an appetizer and you’re not a fan of squid, you should consider the parmesan brussels sprouts, which have a nice caramelized flavor, or the buttery, creamy clam chowder. I’d steer clear of the Mexican street corn, though, as the cob that arrived at our table was badly overcooked and mushy. Our server took it off our bill when we let him know we didn’t like it, which we appreciated, but even if it had been properly made the flavor was still unimpressive compared to the other items we had. 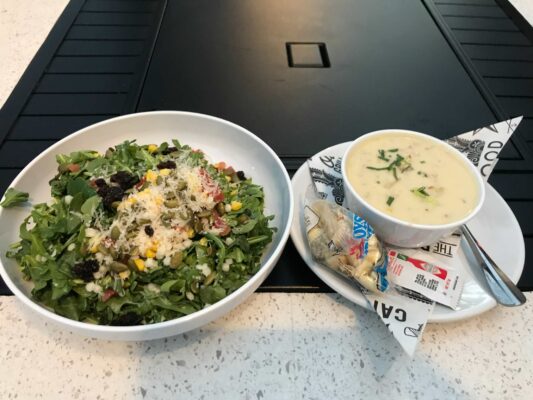 The Field of Greens salad and a cup of clam chowder at Brews Hall. Photo by Richard Foss

The Field of Greens salad is a better bet for those who like their veggies, a mix of arugula and couscous with corn, tomato, currants, pepitas, and parmesan. The thing that made it work was the buttermilk dressing that moderated the slight bitterness of the arugula. They offer some classics like a chicken cobb, Mexican Caesar, and blue cheese wedge, but I’d get this again in a heartbeat

Among the main courses, over several visits I’ve tried a carnitas burrito and taquitos from the Chingon Kitchen menu, a “Nashville” chicken sandwich from the Chicken TWILI menu, burgers from the Colin Cowherd menu, and the fish and chips and blackened salmon from the Rock’nFish grill section. Though these were all coming from the same kitchen, the flavors were highly varied. The Chingon kitchen items were acceptable but unimpressive, the carnitas burrito very mildly flavored, albeit made with good beans and rice. I know carnitas styles vary across Mexico and some are indeed just chopped roast pork, but it’s my least favorite style. There was none of the cumin and other spices to add zip, none of the leathery or crispy exterior to add texture, so it was decent but forgettable. The machaca taquitos were much better, but were all beef, with none of the green pepper or onion that is usually in machaca. They were actually pretty good, but didn’t match the description on the menu. 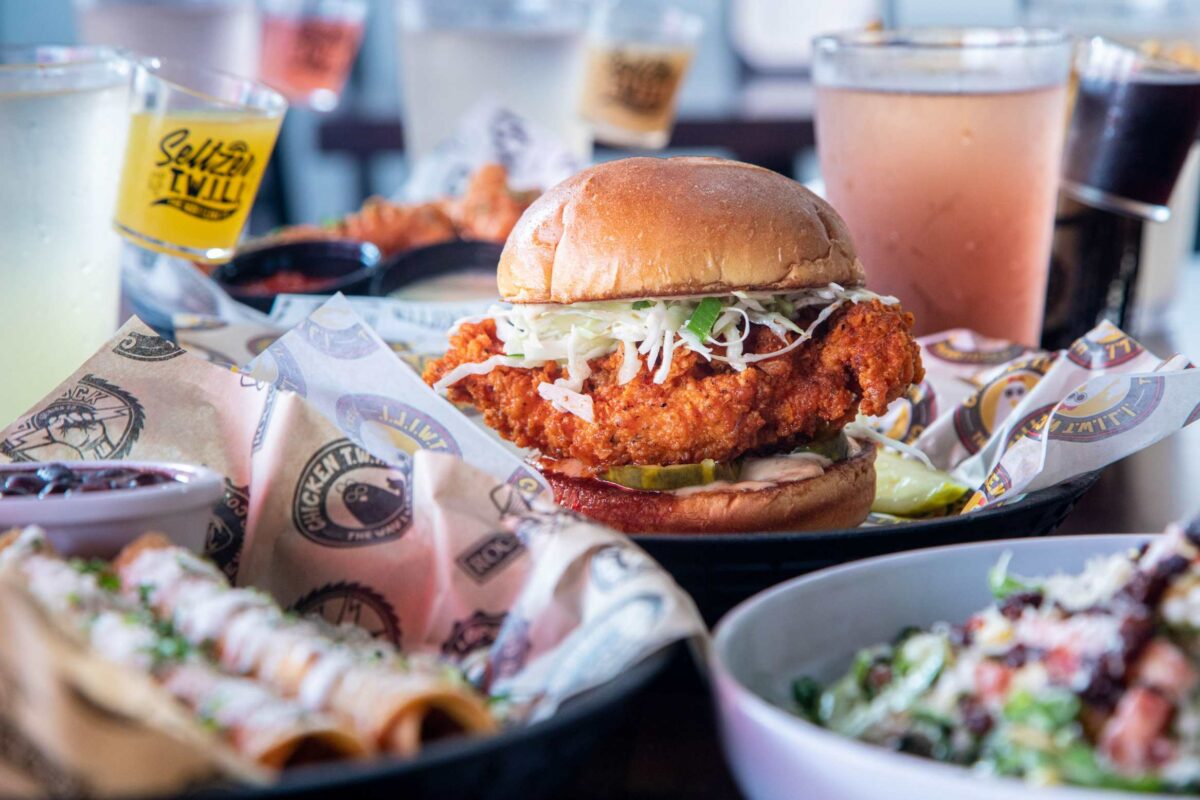 The TWILI part of Chicken TWILI stands for “the way I like it,” and presumably refers to the fact that you can get it either fried or grilled with a variety of seasonings. The chicken arrived hot and crisp with a Nashville style sauce that was about four on a scale of 10, which is probably what most people want, because true Nashville chicken can be a frightening experience for those who don’t like it really spicy. If you like moderately spicy chicken sandwiches, this is a good choice, but if you are looking for something that will raise a sweat and melt your fillings, seek elsewhere.

The burgers here go against the grain of most modern restaurants, in that they have only the most basic of condiments and additions. Only two cheeses are offered, American and Jack, and the only add-in besides pickles, onion, and the usual is bacon and fried onion. I tried the Herd burger with cheese and was reminded of how much I dislike American cheese, but the Favorite with bacon and fried onion was a very good burger. They use Niman Ranch California beef and know how to cook it, so those who like a solid basic burger can dine happily. If you get fries or rings, you’ll be reminded of the wisdom of cooking in tallow, because they really are flavorful and crisp. This is the way McDonalds fries were cooked back in the days when they were good, these may bring on some nostalgia if you’re old enough to remember those.

The fish and chips and the blackened salmon sandwich from the RocknFish menu are priced a bit lower than at the original location in Manhattan Beach, but made with the same skill. That’s high but deserved praise, because their fish and chips are among the best anywhere in the South Bay. The person who ordered that requested chips fried in canola oil, and while they’re not quite as crisp as the ones fried in beef tallow, they’re about as good as vegetarian fries get. The salmon sandwich hit the spot too, with a paper-thin crust of mild seasoning encasing moist, fragrant fish.

I have only tried one dessert, the churros, and they were stellar, freshly made and extremely light, with a cinnamon-sugar crust that wasn’t overly sweet. Mexican Caramel sauce comes with them, or bittersweet chocolate sauce is available if you like these Spanish style. If you have ever liked a churro, or any other doughnut, order it, but be aware that they take fifteen minutes to make. We ordered them as we started our sandwiches and they were available just as we finished.

Brews Hall has beer, of course, and also a full bar with a Mexican theme. The michelada is nicely spicy and has an exuberantly salty rim – you might ask them to back off unless you really enjoy sodium. The blackberry sage margarita was nicely balanced between tart and sweet, but the drink I enjoyed most was one I didn’t expect to like at all. That was the Old-Fashioned milkshake, which was indeed bourbon and orange bitters in a milkshake. I don’t usually like milkshakes at all, but this was delightful and makes me more willing to try others of the style.

Prices at Brews Hall are a reminder that you are on the Pier Plaza – a chicken sandwich or burger with fries and a drink will cost $30, which is about standard for the area. There are enough solid hits on this menu to keep people coming back, so the plaza’s latest bar food specialist has a bright future.