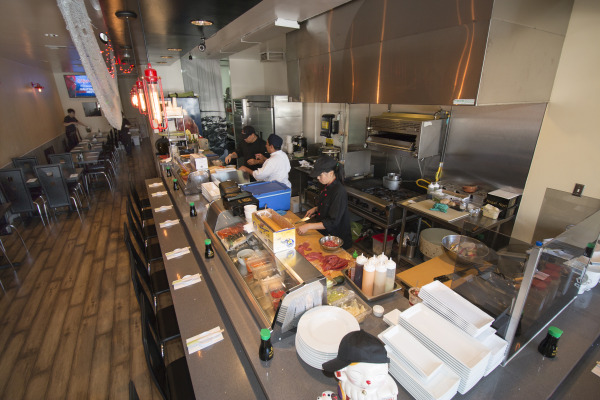 Part of the joy of sushi is the beauty of the food, which comes in forms that can be startling. I remember when I first saw the neat cubes of rice, thin sheets of seaweed, neat cylinders of sushi rolls with squares of cucumber and fish next to a perfect sphere of wasabi. An occasional abstract puddle of pale sauce added a random element. I couldn’t tell what anything was – we were having geometry for dinner.

Fast forward a few decades and modern sushi has added dazzling colors, with bright spatters of sriracha and mayo next to wheels of jalapeno and dots of black and tan sesame seeds. The occasional item that shows its origin, a shrimp tail protruding from a roll or stray tentacle in a salad, is almost surreal. When you have a chef with an artistic eye, good quality ingredients, and a gift for flavor, it all comes together wonderfully.

That very thing has happened at Flyin Fin, which opened earlier this year in Riviera Village. The room that was deliberately staid when this was a Czech restaurant is now whimsically decorated, with a drape of gauzy fabric, Christmas lights, and bright red warehouse lamps. It’s a hip, lively atmosphere, and it creates a stylish energy.

We talked with our server about which items would give us a good sampling of the food here, and she suggested stuffed soft shell crab, an array of rolls, and some albacore citrus sashimi. We washed these down with a fruity sake called Sharaku and a Japanese Orion lager.

The soft shell crab arrived first, a good-sized beast compared to most that are served locally. It had been stuffed with crabmeat 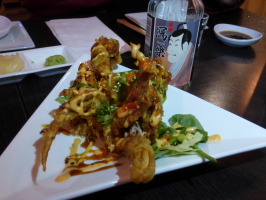 before being coated with a lightly curried batter, fried, and drizzled in sauce – a process that sounds like it ought to obliterate the crab flavor, but it didn’t. The chef here is Thai, and knows how calibrate curries to interact with seafood. The crisp batter was delicious, the crab inside still moist, and it arrived so hot it had to be mere seconds out of the fryer. My only complaint is that the drizzle of sauces, while pretty, were superfluous; I’d have preferred them on the side.

Like the crab, many of the rolls here were flash-fried, or had some component that was. The Flyin Fin roll (which we had to order, because when a place offers a signature specialty they’re presumably proud of it) used tempura shrimp along with crab, scallop, tuna, and pompano. The small fried whole fish that adorned the plate was more than decoration; the Japanese regard a fried fish skeleton as something akin to a seafood-flavored potato chip. It is a tasty, crisp morsel, a nice texture contrast to the soft roll and moist fish. The flavors here are in balance despite the jalapeno and drizzles of sauces, and it’s worth ordering.

We ordered another roll at our server’s suggestion despite the fact that it violated one of my rules about this cuisine. I don’t like cream cheese in sushi, but the Jaw Drop roll – salmon, grilled eel, crabmeat, avocado, cream cheese and jalapeno deep fried and topped with a dash of chili sauce – worked in a crazy way. The avocado and cream cheese helped mitigate the hot to flavorful, and added smooth texture inside the seaweed and tempura exterior crispness. We also had a roll called King Cobra that had most of the same ingredients minus the hot sauce and cream cheese, and it worked in an entirely different way. This was not fried, and with mild sweet eel and sesame sauces instead of the hot stuff, the focus was on the fish, and alternating bites between the two was an interesting exercise. They do like their fryer here, but you should get some of the more natural rolls and other items that accentuate the natural flavors.

An excellent example of this is the albacore citrus sashimi, six pieces of lightly marinated, perfectly fresh fish served with a bit of shredded daikon and a sliver of fried onion. Again something fried, but completely appropriate in this case. The onion and the smooth, lemony raw fish were heavenly together, and show that the people here can show restraint when the occasion demands. 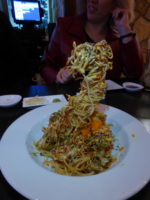 No restraint whatever was in the item that is probably most talked about here – the pornado. The description – raw crabmeat, spicy tuna, and avocado wrapped in soy paper and crispy potato with hot sauce – doesn’t hint at the appeal of this item. The roll was just as described, but served under a five-inch-high
sculpture of fried julienned potato twisted to resemble a tornado. (Like finding shapes in clouds, you may see something else – to the friend who joined us, it resembled a sea monster.) The sculpture was decorated and flavored with streaks of sauce, sesame seeds, fish roe, and apparently anything else that caught the chef’s fancy. It was a tasty show-stopper, and if you dine here it’s a must-have.

We had decided not to order dessert, but our server gifted us with some frozen mochi ice cream balls on a plate – two pieces of green tea, two strawberry, with whipped cream and a squeeze chocolate. It was a light, refreshing way to finish, and we’ll have it deliberately next time.

There are many modern-style sushi places in the South Bay, but based on this meal at Flyin Fin I have a new favorite. Dinner for three with sake and beer ran $120.00, modest for a sushi dinner. The ideas and execution are excellent, the fish tastes very fresh, and the service was informed, prompt and friendly. You’ll have a good meal, and probably some pictures of it to show to your friends.