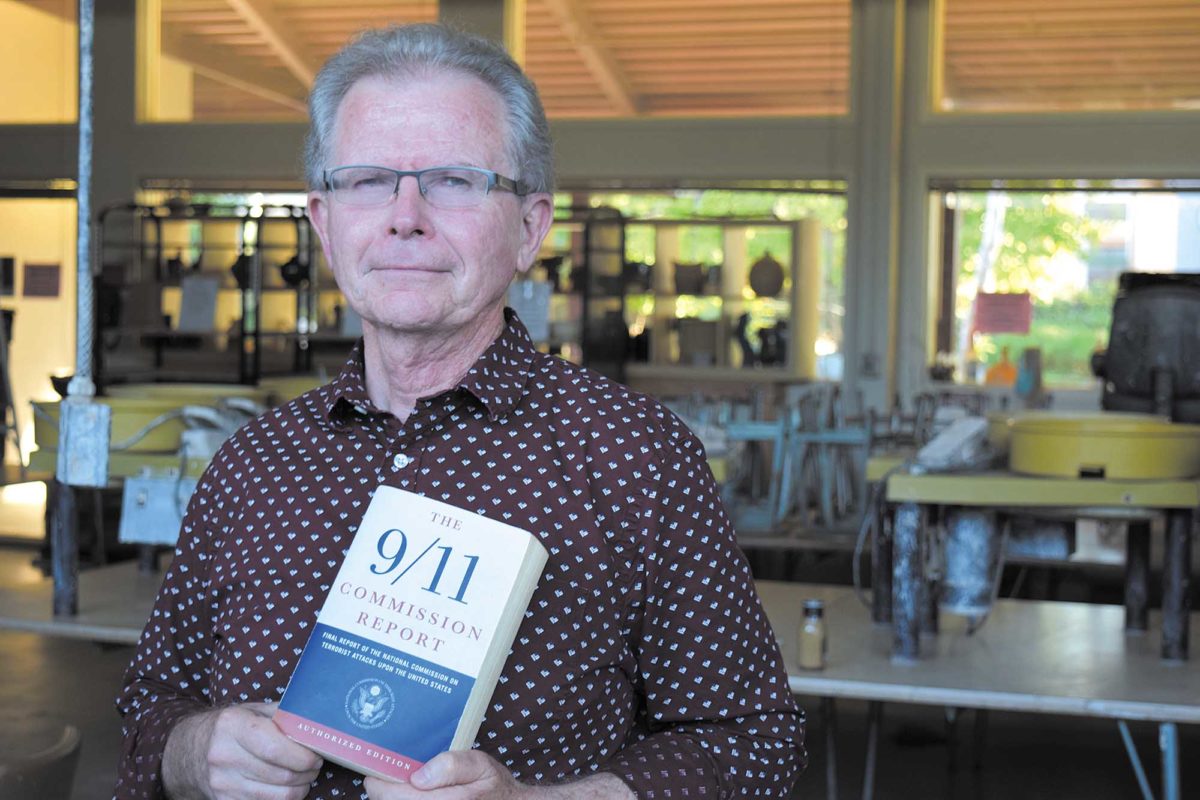 John Powers holds up a copy of “The 9/11 Commission Report,” which he purchased 15 years ago, in 2004, when it was on sale at his local post office.

He began reading it, hoping he could adapt it for the Works In Progress theater series that he’d been presenting at the Torrance Cultural Arts Center.

“I was always looking for content and generally finding it in recent American history,” he says,” sitting in a room not far from where that series once took place. “In this work, which I had read very quickly and then reread multiple times, I saw a story that could be broken down into four discrete parts, which I dramatized and presented at the Nakano Theatre. It was made up of both professional actors as well as community people, some of whom were elected officials. At that time, there were questions about 9/11 that were emerging, but I refused to listen to any of it because I had a story to tell and this was a great story. It really laid itself out in terms of events taking place in 1998, 1999, 2000, and 2001, where it culminates with the attacks in New York, Washington and Pennsylvania. And that was it. I wiped my hands and moved on to the next thing.”

But in 2014, Powers went back to the material for another look. What he now found were articles that challenged the official story set out in the US government’s “9/11 Commission Report.”

As he investigated further, one thing jumped out: “It had to do with the phone calls that were ostensibly coming from the airplanes down to family members,” Powers says. “These were predominantly not sky phone calls but cell phone calls. The problem is, cell phone technology in 2001 did not permit connections between an aircraft moving at 300 or 400 miles per hour and flying at 30,000 feet (and someone on) the ground. So how could these phone calls be made from an airplane in the sky when that technology was impossible? This giant doubt suddenly lodged itself in my brain, and I said ‘Wow!’”

Although he was still teaching the course as originally conceived, Powers would raise questions for his students to consider at the final class. Then he changed direction: “I said, ‘There’s no way I could ever teach this material again. This is more than 500 pages of deception.’ I’m speaking again of ‘The 9/11 Commission Report.’ It’s deceptive, it’s shallow, it’s refusing to address the issues that were apparent right at the time (in) 2003, 2004, 2005. A number of prominent people were saying ‘How could this be?’ It was as if the members of the commission put their hands over their eyes and their fingers in their ears.”

In addition to the issue of the cell phone calls, Powers found other questionable statements. “What I attempt to do in this course, ‘9/11 Reconsidered,’ is to examine these very discrete areas and present that to adult students. I don’t go into speculation. I’m just saying this is factual information that we see either through photographic information, videographic information, eyewitness testimony, and other material. I just ask that you confront this and come to terms with it.”

“9/11 Reconsidered” is being presented under the auspices of El Camino College Community Education. The six-week course begins Saturday, Sept. 21.

Instead of inundating his class with verbal detail, Powers is going to screen “September 11: The New Pearl Harbor,” by Massimo Mazzucco. It’s a three-hour documentary that Powers has divided into six discrete episodes, and he’ll show one at each of the six class meetings, which will then be discussed. That should make it easier for the participants to digest.

The film begins with a look at the comparisons between 9/11 and Pearl Harbor itself, specifically the air defense system. This segues into a discussion of the four planes that were allegedly hijacked, including the apparent fact that “commercial aircraft cannot fly at 500 miles per hour at low altitude without having the wings come off. And yet,” Powers adds, “the planes that came into the World Trade Center were flying at that speed without any disruption to their flight pattern whatsoever.” 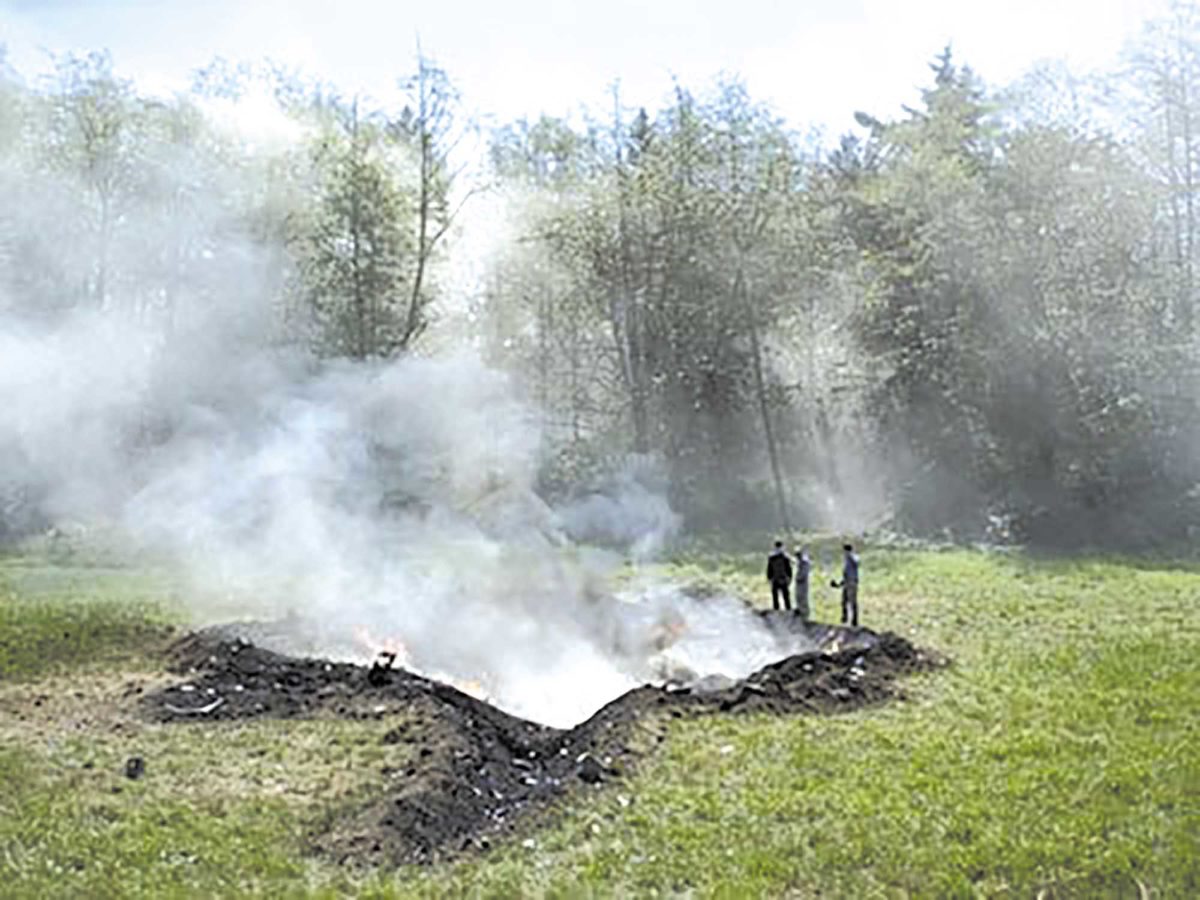 Shanksville/United 93: A rather small footprint for a crashed airliner? Photo shared by John Powers

As for the Boeing 757s that crashed into the Pentagon (American Airlines 77) and went down in Shanksville, Pennsylvania (United 93), “there is no physical evidence, or photographic or videographic evidence, of either of those planes at either location.”

Which brings up a fundamental question: So where are those airplanes?

“I can’t answer that,” Powers says; “only our government can answer that. But I present evidence that clearly (indicates that) there is no Boeing 757 at either one of those locations.

“The second half of the class deals specifically with the World Trade Center, the history of the buildings and also what happened with 7 World Trade Center. The most stunning thing (is that) these buildings collapsed in freefall and in symmetry. These are the signatures of controlled demolition…

“What I attempt to do is just present the factual information that we’ve observed. I just ask you to look, and you will see.”

As for those in-flight phone calls…

The obvious question is this: If a grand deception and cover-up exists, how could so many people be in on it?

Powers in turn asks a question: How many people in government are whistleblowers, and what happens to those that are? “They become the target of government oppression,” he says, before mentioning Chelsea Manning, Edward Snowden, and, going back nearly 50 years, Daniel Elsberg. Most people, he adds, realizing what’s at stake (their job, their pension, their safety, their family’s safety, etc.), don’t want to take that huge risk. And so they keep their mouths shut.

The drone, he continues, was blown up in the air. “The Pentagon was blown up with internal explosions.” He points out that what the employees smelled was cordite, which smells like gunpowder. What they didn’t smell was jet fuel. 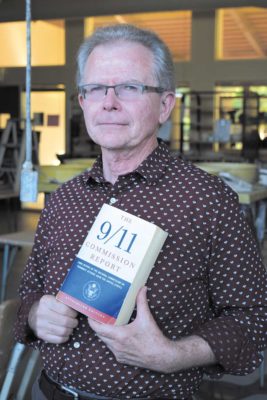 “September 11 will come along, we’ll talk about ‘Let’s roll’, which was again a script that was created and played over the air. Never happened. It was scripted just as Orson Welles’ ‘War of the Worlds’ was a creation, and it had the same impact of making people literally believe that we were being invaded by Martians. The US government created so many of those intercepted radio transmissions, particularly from Flight 93 that still play at the World Trade Center memorial today. All of that was constructed to make it seem as if something had happened. It never happened.”

Powers spent several years refusing to delve deeper into the events of 9/11. However, “When a subject engages me, I don’t stop being engaged with it,” he says. “I keep going back to it (to learn) what else has emerged. That’s when I discovered the work by David Ray Griffin, Richard Gage, and numerous others. One of the most valued [books] is ‘Crossing the Rubicon,’ by Michael Ruppert.

“I give a lot of information in class and then I provide other things (regarding 9/11) that they can investigate for themselves outside of class should they choose to.” But Powers realizes that many people taking his course may not want to pursue this topic because it’s a painful one, especially when doubt of the government is at the core of it. He mentions the World Trade Center itself, which, built in the early 1970s, was becoming obsolete. “It would have cost so much to demolish that building. It needed to either be retrofitted or have all that asbestos removed. And they found a perfect way of getting that asbestos out: They blew up the buildings and put it in the lungs of New Yorkers and people in New Jersey.”

In his course, Powers examines the reasons why the planes flying into the twin towers and the Pentagon were not intercepted. Was it all really a complete surprise? Especially after the first incident, when everyone should have been on high alert.

“The big issue was to get those towers down. That was urban renewal. But we would have never gotten a declaration of war or the passage of the Patriot Act unless there was an attack on a government facility, one that really represented our defense industry. And that’s why the attack on the Pentagon specifically. There were probably other planes that could have been brought into this, but they were called off. I don’t have factual information on them. It’s just through my reading I understand that. I think what they discovered is that the intended effect was brought about with the World Trade Center and with the Pentagon attack. And then, as I’ve said, there was no United 93. There was a United 93 but it was landed probably in the Midwest somewhere and what happened to those passengers and crew, God only knows.”

As for the official story of what transpired over Shanksville, Powers has his doubts and information to support them. Much of this has to do with the lack of debris.

“What was shot down in Shanksville was another drone aircraft, and it just left pieces in the ground. When people arrived there, there was no smell of aviation fuel. What they smelled was burning grass.”
Powers stops to reiterate his position. “I’ve come from (being) this guy who had flags on his car, that was celebrating this work (“The 9/11 Commission Report”), to being a person who now just says this is nearly 500 pages of lies and deception.”

What about the 19 alleged hijackers? Powers concludes that none of them boarded the flights they were said to have boarded and taken over. How can that be? Powers points to the lack of photographic and videographic evidence. Although there is a well-known image of Mohamed Atta and Abdulaziz Alomari passing through security at Logan Airport, Powers doubts the veracity of the information attributed to this image as well.

“I don’t get upset with people when they contest me on this. I totally believed it. None of you are going to be as committed to the official story as I was when this thing came out.”

Referring back once more to the attack on the Pentagon, Powers says that the drone exploded outside of the building, and that the structure was detonated from within. As for Flight 77, it is said to have come in at ground level. “You know what the problem with that is?” Powers says. “Those massive engines. Those steel and titanium virtually indestructible engines hang eight feet below the fuselage of the plane. They’d be scraping the lawn the whole way. And you can look right at the lawn and it’s as green and as untouched as anything. Look and you will see. That’s all I’ve gotta say. It’s amazing.”

9/11 Reconsidered, as taught by John Powers, is sure to provocative and maybe even contentious. The six-week course begins Sept. 21 at El Camino College in Torrance. Enroll now at (310) 660-6460. ER