A formula that works [restaurant review] 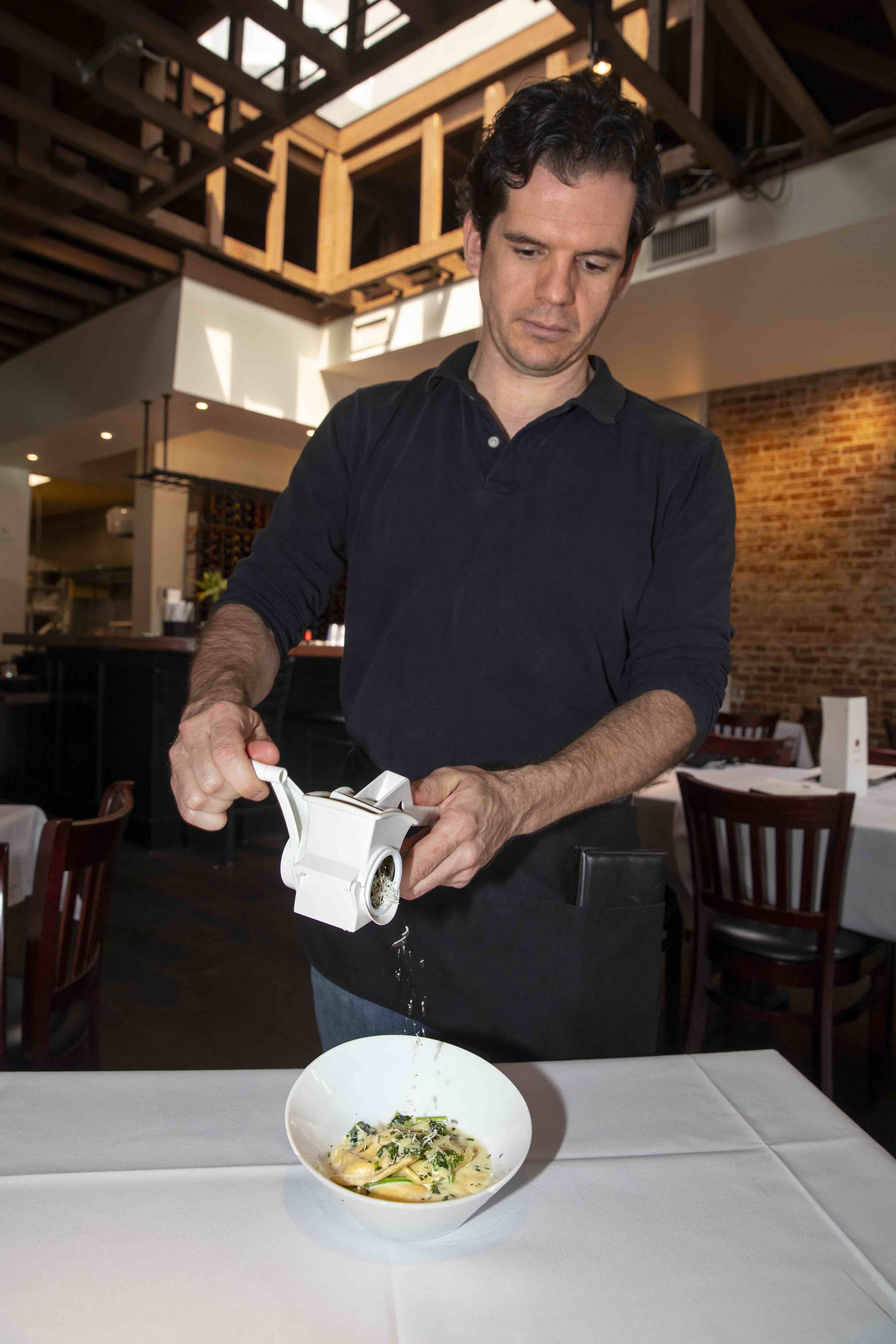 A long time ago there was a restaurant in Torrance called “The Chicken, Steak, and Chocolate Cake Place.” If you needed to know what they served, all you had to do was look at the sign. This evidently wasn’t a great strategy because like the other restaurants in that chain it didn’t last long, but you had to admire the way they communicated exactly what they offered to prospective guests.

Some restaurants that have lasted a lot longer have been more vague about what they serve: we know Good Stuff serves stuff that is good, though they don’t specify exactly what that stuff is. Others have a specific item in their name, but serve much more, such as the International House of Pancakes, which also offers waffles and omelets, and Fleming’s Steakhouse, which serves many things that aren’t roasted chunks of meat.

To this we should add Deluca Pasta, which actually used to have a more encompassing name. They were Deluca Trattoria until last June, when they changed management, name, and menu. Their focus did narrow somewhat, and to the anguish of some longtime customers, they stopped serving pizza, but they still offer a lot more than pasta.

Their starters show they have a firm grasp of the classic flavors, though they don’t make everything in a way that is rigorously traditional. I’ve never heard of Italians buttermilk-brining the calamari in a fritto misto, but it does make the squid pieces more tender than usual. The seasoned batter was a bit oily but the flavor more than compensated for that, and the addition of aqua pazza, a tomato and seafood broth, alongside the usual aioli dipping sauce gave a broader spectrum of flavors. The arancini were even better, the fried rice balls light and crisp so a burst of steam came out when we first broke them open. I don’t believe I’ve seen these served with fig and pancetta jam before, or with a reduced pinot grigio that emphasized the fruitiness of that wine. I preferred the jam with the arancini, but we used the pinot reduction as a dipping sauce for our bread.

They toast that bread for the croutons in the Caesar too, and it’s an unusually good one. The dressing is rich with a touch of garlic and not over-applied, and there is plenty of parmesan and big pieces of white anchovy filets. Those lend a more delicate and pure flavor than the heavily salted ones that are often used, and they make this classic shine. They don’t put any particular twist on the tomato gorgonzola bisque either, unless you count a slightly heavy hand with the funky cheese so that you really know it’s there. This wasn’t bad but I liked the salad so much that I’d order it every time. 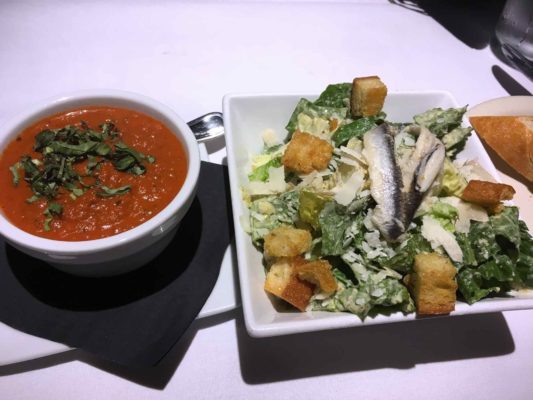 Another starter was so good that we noted it as something to order as an entree – tomatoes stuffed with a mix of Italian sausage, piquillo peppers, and pecorino cheese, topped with breadcrumbs and served over spicy marinara sauce. Piquillos are native to Spain and are small and sweet, often used for stuffed peppers rather than part of the stuffing. They shine in this preparation, which has all of the flavors of a zesty pasta dish without, you know, pasta. 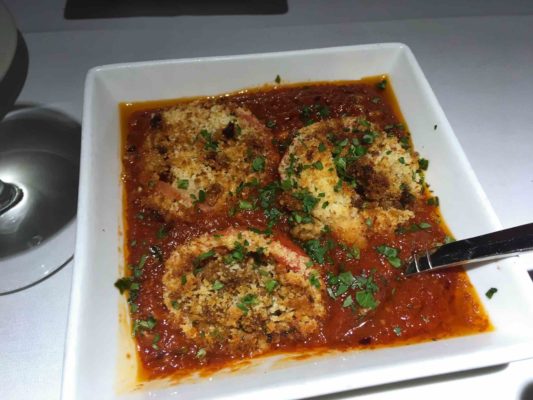 Speaking of pasta, which is after all in the name of the place, they make it in house, and you can tell the difference. The dough on the beef ravioli was thick enough to have some springiness but not too thick – some chefs show off and make it thin as a crepe, which is a neat trick but less enjoyable for those who like pasta. They serve these with sautéed chard and parmesan topping over a braised beef ragout, and it’s very rich without being overly filling. On another visit we tried the cheese ravioli, which was much more multi-dimensional than the description would suggest. Three cheeses, sheep milk ricotta, pecorino Romano, and asiago are used in the filing, then the pasta is gently cooked and tossed with chopped baby spinach in a garlic cream sauce. It’s all about cheese and cream richness with herbal notes from the garlic and spinach; a simple formula that always works.

Almost everything on this menu fits that description, in fact. This is Italian home cooking presented without artifice or fancy presentations. The orecchiette, pasta shaped like little ears, is tossed with the heirloom Italian broccoli called spigarello, house-made sausage, and wild mushrooms in a pinot grigio butter. The key to this is the quality of the ingredients and how they are combined — you could toss broccoli and sausage in a wine butter at home too, but it wouldn’t be this good.

One thing you probably wouldn’t do at home, or at least you wouldn’t do right on the first try, is the risotto topped with grilled pork belly. To get the creamy texture of a proper Italian risotto you have to add ingredients one by one while stirring constantly for about 20 minutes, and it’s a dish you can’t make ahead of time and reheat. Expert chefs have tricks to partially cook it and then finish it as each order comes in, but if they miss by even a little the rice becomes mushy or gummy and it’s back to the drawing board. This risotto was made with a chicken stock with wild mushrooms and chopped rapini, and it was a perfect foil for pork belly that had spent some quality time slow cooking and was then finished on a grill for added smokiness. 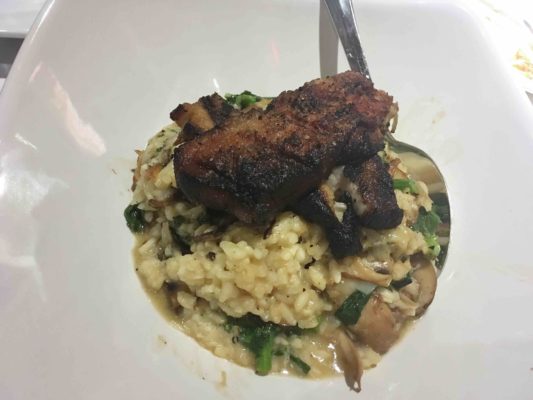 The pork belly risotto at DelucaPasta. Photo by Richard Foss.

The wine selection is mainly Italian with a few California bottles and is very fairly priced, with a large selection of decent bottles under $30. Those who appreciate the excellent stuff will find a few high-end bargains, like a 2011 Fontanafredda Barolo for $105. The by-the-glass list is good too, and those who enjoy a wine bar experience will find plenty to enjoy.

The only weak spot on the menu is dessert, which is limited to tiramisu or panna cotta served in flip jars. It’s a cute style of presentation and the one we tried was pretty good, but if you want a light item to finish (like cannoli, cake, or a fruit tart) you’re out of luck. I hope they consider adding some items that would let diners have more choices.

Since you’ve read this far in my review, it’s time for me to share the secret about Deluca Pasta – go on Tuesday. On that evening only they offer three courses for $32 per person, and they’re not stingy about choices. They offer your choice of six different starters, four soups or salads, and seven mains, and if that isn’t a deal, I don’t know what is. Oh, and did I mention that a glass of wine or beer is included?

Deluca Pasta offers classic food in an atmosphere to match, the brick walls of the century-old building lending an atmosphere of solidity and age. One of these days I’ll try one of their mains like the roast chicken or seafood specials, but for now the pastas keep me coming back. The service was very good both times we were there, the food was fine, and… did I mention the Tuesday night deal?