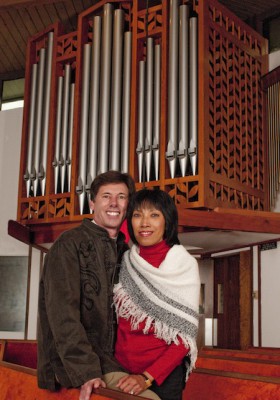 Craig Molitoris thought he had it all figured out. He would graduate from college and then head off for four more years of study at a seminary to pursue his Pastoral calling. That was, until he met his future wife, Joyce.

“I remember meeting Joyce, who was studying to be a Christian teacher. I remember thinking that I was just going to become a pastor here in the U.S.A., but then I heard her story, about how she not only became a Christian in Hong Kong, but also was the first Christian in her family,” says Molitoris, Pastor at Mt. Olive Lutheran Church in Rancho Palos Verdes. “I never really thought about overseas missionary work until I heard her story and I started thinking about how many places there are where Christianity is not so common. Joyce’s story made me begin to think about working cross-culturally.”

Since their initial meeting at Concordia, Pastor Craig and Joyce Molitoris have devoted close to twenty years further pioneering their Lutheran ministry throughout China, teaching countless classes at Chinese Lutheran high schools, standing as the figure-heads for their denomination, the Lutheran Church Missouri Synod, throughout all of China and in Taiwan, and even going as far as opening up their home to the public as a place of worship.

After returning to the United States in 2004, Craig served for six years as a theology professor at Concordia University in Irvine – an unusual addition to the resume of an average pastor. And so when Mt. Olive recruited him in 2010, the community could hardly have found a religious leader with a more varied background. And for the pastor, coming to Palos Verdes represented a return of sorts the very roots of his calling. He’d found his flock.

“I just felt the timing was right to finally stay put and be able to serve a local congregation after all those years, and especially in a place like this with so many opportunities to be able to build on our diverse experience.”

The Molitoris’ know what its like to start at ground zero. In 1986 Craig and Joyce moved to Taiwan as a mission for the Lutheran Church, where they set out to plant a Chinese Lutheran congregation in downtown Taipei. They had no church facility and had only a little over a handful of Lutheran followers showing up regularly.

“When we were first starting our time in Taiwan, we had absolutely nothing,” says Molitoris, who spent a total of 18 years in China and Taiwan. “Even to rent a place in Asia is very expensive, and in fact the church started in our home. Then as we began to grow and we moved to another one of our member’s homes, until we eventually had some of the single women in our congregation rent an apartment together with a big living room. The living room itself was actually bigger than our entire apartment, where we originally held our worship. We never really had a church of our own, we just worshipped where we could.”

Having found a need for religious leadership amongst those seeking out Christianity in Taiwan and after establishing a fully functioning church by 1992, both Craig and Joyce took to expanding their Lutheran missionary work into other parts of China. Joyce’s native Hong Kong, served as a home base during Pastor Craig’s monthly, weeklong trips to neighboring Chinese villages on the countryside and small bible groups in and around the city.

“During the ten years we were in China, I realized how quickly things change. China doesn’t really like the word missionary. I used to carry a name card that actually said, ‘Craig Molitoris, Pastor from the Lutheran Church’, but most Christian workers would not do that. They would say something like, ‘I am an English teacher’, or ‘I am businessman’. Trying to keep a real low profile,” says Molitoris. “However as my work continued I realized that there was actually a demand for trained pastors there. In a lot of the villages they had no one to stand up there with the bible stories and teach, but they didn’t really have the training like we do here. So it was fun to work with that village level of church leader, and try to give them more guidance and leadership training.”

“It’s funny, when Mt. Olive Lutheran Church was interviewing us, and trying to get us to come here and head the parish, they would drive us around and say, ‘Oh you know it’s really beautiful here’ and so on,” recalls Pastor Craig. “We just remember thinking ‘Yes, you’re right it’s beautiful here, but we have lived in a lot of different places, some nice, some very poor.’ But ultimately we found that in coming to this community, there were many ways that the church can try to serve. Whether it’s serving younger kids or older folks, ethnic Chinese or other nationalities, there are several ways that we could be useful in the community.”

For the past two and half years Pastor Craig has begun to cultivate a lively Lutheran congregation at Mt. Olive, including the development of cross-cultural worship, that he and his wife devoted a large part of their lives to in China.

“Both Craig and I have this Chinese background; we both speak Chinese and wanted to use that again more on a day to day basis. So we started a Chinese service in May that takes place right after the English service on Sundays,” says Joyce Molitoris.

“We thought it was going to happen when we first came here but we weren’t really sure. Obviously here in America, a lot of Chinese folks learn English, and speak English pretty well. Some of the older generations don’t speak all that well, but again everyone is different,” says Craig Molitoris. “Worship is something so personal; people prefer to do that in their first language if possible. So even some of our Chinese friends that do speak English, would rather worship in Chinese.”

Between Pastor Craig and Joyce’s extensive religious education and experience as religious leaders in the communities they have been a part of, the pair have become a mainstay for Mt. Olive’s Lutheran congregation. Their compelling mission to serve those in the community continues to permeate their everyday lives and overall character. Together they serve a close knit religious community that celebrates the cultural diversity of their religion.

“The past two years have been a different type of ministry for me. I studied to be a pastor in college, but never actually became one until coming to Mt. Olive. It’s different than being a college professor or being a travelling missionary, you’re kind of in one place working with the same people all the time, its kind of a new challenge for me.”