A steak in Manhattan [restaurateur profile]

“There are enough places for people to go that are fun and vibrant and loud, but we wanted a quieter dining experience.” -- Chef David Slay 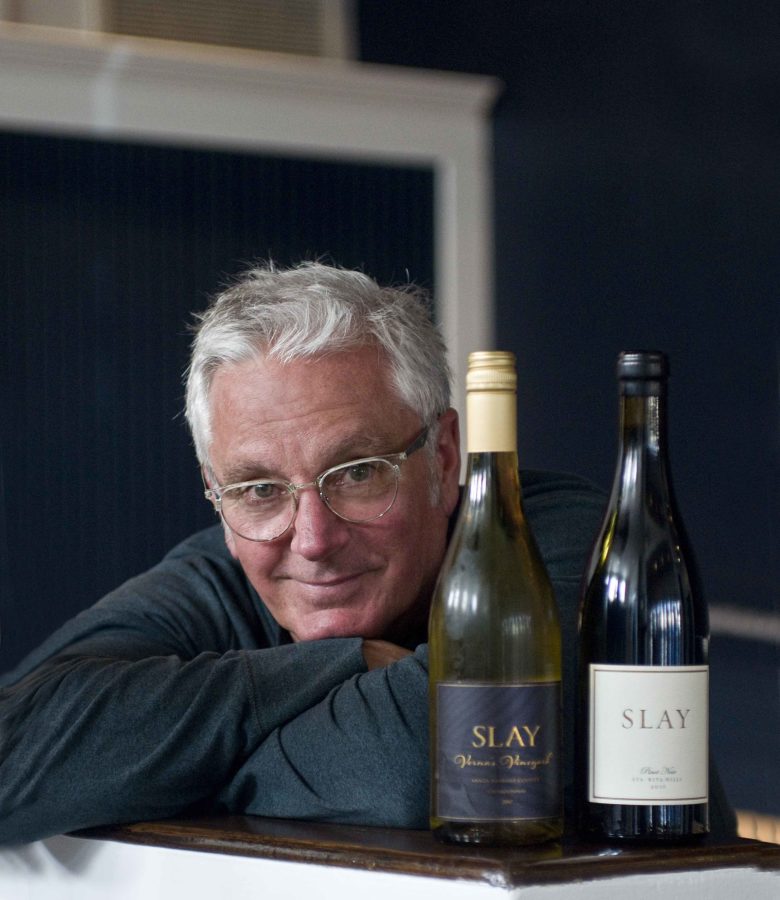 David Slay with bottles of wine from his vineyard. Photo by David Fairchild

To find out about the next big restaurant opening in Manhattan Beach, I went to Stanton, a city in north Orange County. It isn’t where you would expect to find a fine restaurant. The top employers are a senior living center and HomeDepot, and almost 20 percent of the population is below the poverty line. Nevertheless there is fine steakhouse, Park Avenue, one of only five restaurants in the county to rank five stars from Zagat. Park Avenue was started by David Slay, who will soon open Slay’s Steak and Fish House in Manhattan Beach. He had been a successful chef and owner elsewhere and was running a catering business when he received  a phone call from a complete stranger.

“Cliff Ronnenberg owned a dairy farm that included the Highway 39 Chicken Pie Shop, and he wanted to open a restaurant there. He grew up on the property and was very sentimental about the place. He and I hit it off so well that I became a 50-50 partner with him and we opened Park Avenue. His business plan was to get the best, build the best, and hope for the best. What we accomplished far exceeded anything he was expecting. A little later we opened an Italian restaurant on the same property in an old tractor garage, called Il Garage. Fourteen years later we’re happy and both places are doing well. It’s a 100 percent destination, no shopping center nearby, no movie theater. It’s not like Manhattan Beach where someone might say, Arthur J’s is full, we’ll walk to the Strand House, and if they can’t take us let’s go to MB Post. Stanton is a lot different from here, where you have all these amenities to draw people. Last Saturday night when we did 250 people, that means 250 people came there for us specifically.”

Ronnenberg had found the pro he needed, a third generation chef whose grandmother and father parlayed a barbecue stand into a chain of white-tablecloth steakhouses. Slay’s culinary journey started with the kind of experience that starts some people running from the business, not to it. 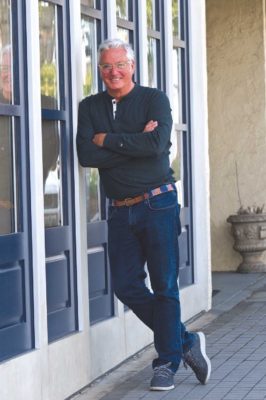 “My siblings and I started to work at seven, eight years old, and not the fun jobs, either. We were  cleaning out the bathrooms, cleaning the bar, taking out the beer and whiskey bottles. We did all the jobs that no one enjoyed, but doing otherwise wasn’t an option. I worked in the family restaurant until I was 16 or so, then worked at an Italian restaurant in St. Louis called Andrino’s that was pretty cutting edge at the time. Then I moved to San Juan Capistrano and opened a restaurant, then moved to Las Vegas and worked in restaurants there. It was different then, the best of everything, more formal service, and classically trained people. Then I went to Paris, Versailles, and Lyon and studied there.

“My first restaurant in California was David Slay’s La Veranda in Beverly Hills, which opened in 1990. We opened during the Iraq war, tough times, but we got a great review in Los Angeles Magazine and our business just skyrocketed. We made California cuisine with an Italian twist, totally different from what I grew up with. We had fresh pasta, which wasn’t that common then, and our menu was always seasonal, vegetable-driven, always natural. We didn’t do tripped-up, over five ingredient dishes, which was what most people were doing.”

After a decade at La Veranda, Slay opened a catering business serving the studio crowd. It was there he got the call about the opportunity in Stanton. Despite the differences in neighborhoods, Park Avenue is the model for the new operation in the South Bay. It’s quiet by modern restaurant standards, which by itself is wildly out of step with current Manhattan Beach, but Slay intends to offer an alternative to almost everything about his competition.

“We want it to be a place where you can leave the kids at home and have a nice grown-up dinner in a quiet environment. There are enough places for people to go that are fun and vibrant and loud, but we wanted a quieter dining experience. We have installed carpeting, and we’re putting in drapes to improve the sound.” 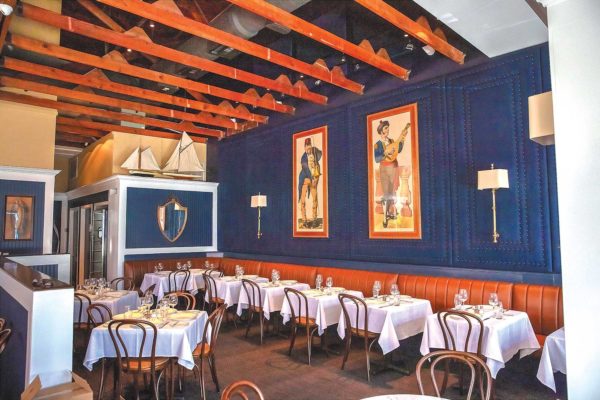 The interior at Slay’s. Photo by David Fairchild.

Slay is familiar with his competition because he has lived in Manhattan Beach for some time, despite running businesses distant from the area. He first experienced life in the South Bay thanks to a dining experience outside a restaurant.

“We had a beautiful old Spanish home that we owned in Hollywood, right by the Hollywood Bowl. A good friend of ours moved here, and 15 years ago we went to dinner at their house. We looked around and we said, what are we doing living there? So we moved here. We put our house on the market and it sold in an hour, and we got a place here. We’re planting a garden at the house right now to supply the edibles for our garnishes.”

This isn’t David Slay’s only foray into gardening. He owns a farm and vineyard in the Santa Rita Hills near Santa Barbara. He bought that two years ago with the intention of retiring there. The new restaurant in Manhattan Beach changed that plan. Still, he is  speaks lyrically about his connection to the land and the way it reinforces his sense of how cooking works.

“I just got back from our farm and vineyard, and the farmer and I were out tasting the things in our field. The only thing on that carrot was some dirt that we didn’t entirely remove, and it was amazing. When you have something natural and fresh, it’s amazing how little it needs. It’s no different with a piece of fish or a steak. Sometimes the less you do to a piece of fish that has so much flavor, the better. I’m a big fan of olive oil, citrus, of herbs, but not a fan of cream and garlic when it’s used to disguise things. I’m not saying I don’t cook with it, because I do, but for those center of the plate dishes, natural is as good as you can get.”

The desire to uphold those standards at three restaurants and a farm that is also a winery is only possible because David Slay has a work ethic and energy levels that are off the charts. The day I interviewed him he had supervised lunch at his restaurant in Stanton, was setting up a private dinner at the new place in Manhattan Beach, and was off for Santa Barbara the next morning for meetings before heading back to Stanton for dinner. Asked how he manages the stress of that schedule, he reveals his secrets.

“I’m not high strung, I used to be. Fifteen years ago, I got mad and threw a pork chop at a cook, and it went out the window and landed on a Mercedes. My wife Gail suggested yoga and I went to Soho Yoga in Hermosa. They’re a great studio and it’s a huge stress reliever. It changed my whole mentality. I also love music, and at home I have a beautiful grand piano that was built in 1925. I started taking lessons as an adult, and I don’t play for people, but it gives me joy. The other stress reliever is being out on the tractor at the farm – I’m working with no cellphone, nobody bugging me, and it’s great.”

Playing the piano, yoga, and driving a tractor are all completely unlike being a working restaurateur, which David stresses is a collaborative task.

“Managing so many moving parts is like being an orchestra conductor or an air traffic controller. I’m always watching our operation, thinking, what are those two bussers doing? What’s happening at that table there? Park Avenue has 62 employees.Here I’m going to have about 20. I block out the noise, the music, all of that and I’m focussed on the whole operation. I can operate the vineyard and three restaurants in the long term, as long as I keep good people.”

Slay’s Steak and Fish House opened May 1st. He’s enjoying one aspect of it in particular.

“Yesterday my commute to Park Ave was 50 minutes. My walk here was five. It’s easy to do the math on that and figure which one is more enjoyable.”  B