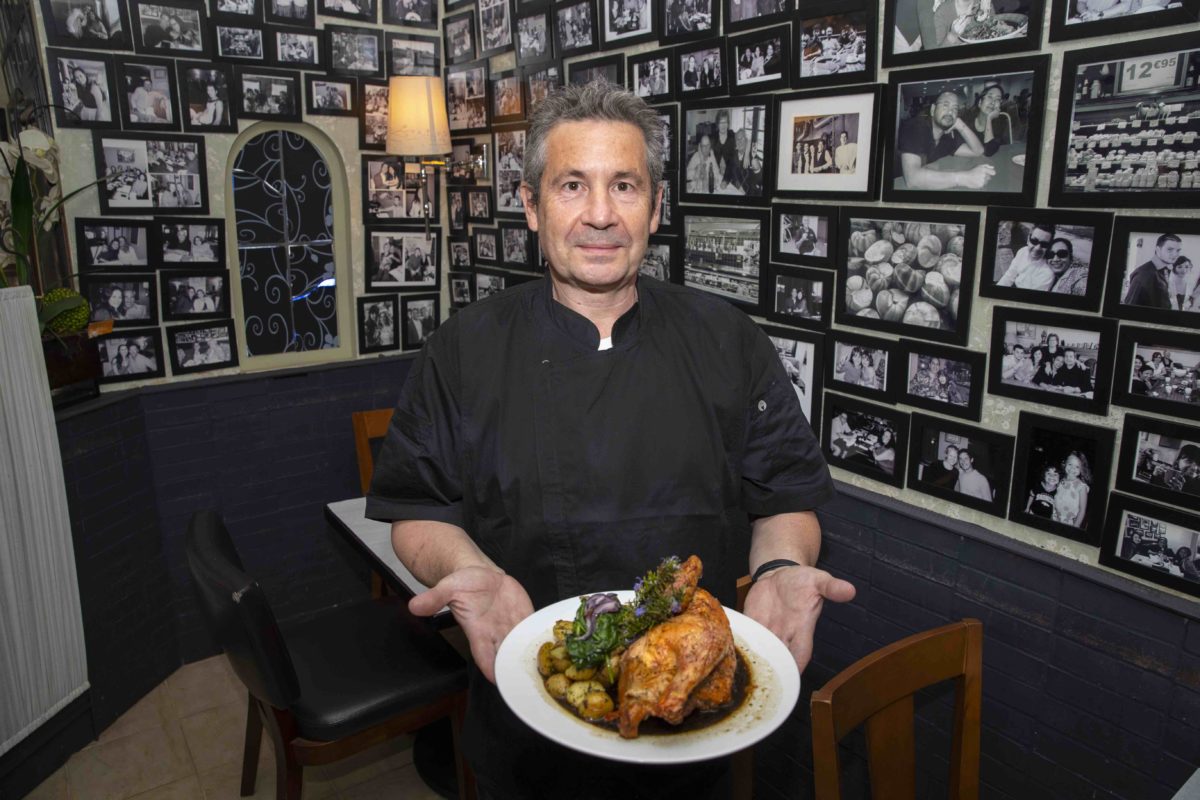 One of the main reasons for dining out is there’s something you love to eat, but not to cook. A prime example is roast chicken, which is just about everybody’s favorite everyday meal. To do it right so that the interior is moist and the skin isn’t rubbery takes not only practice, but time and patience. In the modern working world we’re almost all short of time, and experience suggests that many people have a deficit of that latter commodity. We like our desires to be met before we even know what we want.

In the case of roast chicken there are plenty of people trying to fill that need. Have you noticed that the roast chickens at the supermarket are always near the front of the store, where you can see them from the check stand?

All roast chickens are not created equal, though. Those birds at the store that have steamed under a hot lamp in a plastic container will be mushy and greasy compared to a bird that just left the oven or rotisserie. As with everything else, there’s a tradeoff between quality and convenience.

The South Bay has many places to get roast chicken hot and fresh, and two stand out: Poulet Du Jour in Hermosa and Dominique’s Kitchen in Redondo. At one establishment the chicken is at the front and center of almost every meal, at the other a rare treat for a few diners, and their preparation, flavor, and accompaniments are quite different from each other. In the spirit of scientific inquiry I tried both. 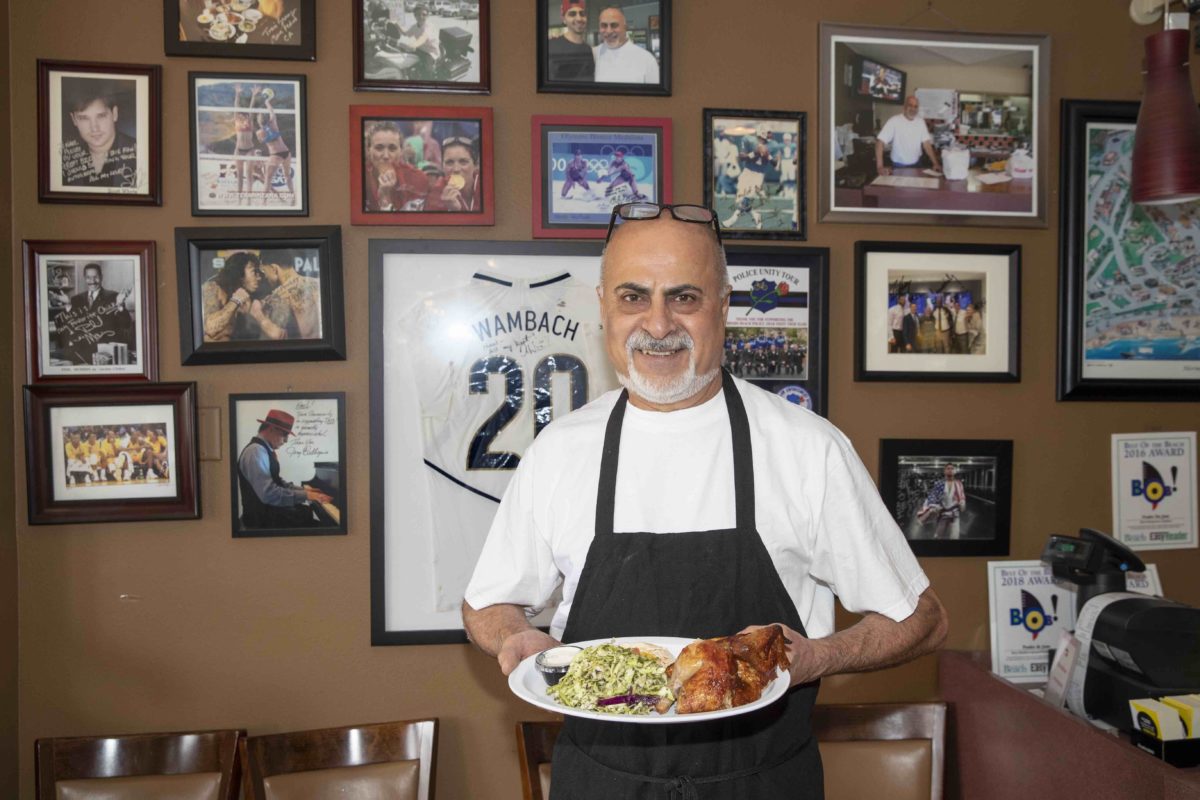 Nael Diab, Poulet Du Jour in Hermosa, roasts as many as 200 chickens a day.

Poulet Du Jour built their business on chicken and won this year’s Best of the Beach readers’ poll for it. Owner Nael Diab says  they roast between 150 and 200 in a typical day. The rotisseries are rotating from early morning until evening with birds seasoned with a fragrant mix of herbs and spices. Diab asserts that the recipe is his own invention and is not eager to share the details – he mentioned it does contain cinnamon and allspice but not the powdered sumac that is often used in the Middle East. It is typical of preparations from the region in that no one flavor dominates, so you get a subtle but complex overlay to the natural goodness of the bird. 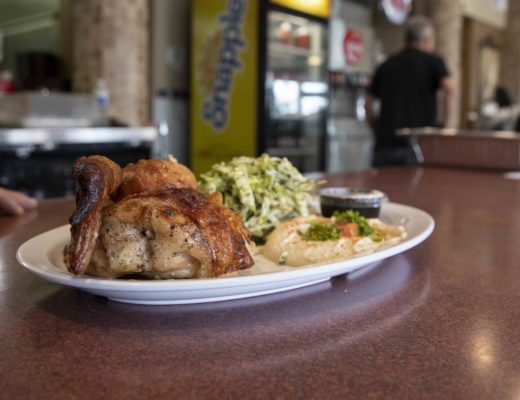 A chicken combo with two sides from Poulet du Jour

The chickens here are fairly small, but half of one with two sides is a satisfying meal. There are lots of choices for accompaniments, and if you feel like following Syrian traditions you may choose house-made hummus (regular or spicy), rice pilaf, Arabic style coleslaw or lemony potato salad, or fattoush salad. You can also choose American green salad, baked potato, coleslaw, or steamed veggies. I would tell you what those taste like, but I enjoy homemade hummus and their Arabic coleslaw, so never order the American standards. I do take a dip or two of their garlic sauce, despite the fact that the chicken is just fine without it.

As for that bird, the skin is satisfyingly crisp and the perfume of spices hits you as soon as it reaches the table. The meat inside is almost tender enough to fall off the bone and moist through and through, thanks to the rotisserie technique. The constant rotation bastes them throughout the cooking process, so that the breast is almost as moist as the thigh. The only part of the bird that is often overcooked is the outside joints of the wings, which are so thin that this is almost inevitable. You’ll probably pick at the morsels of meat here anyway, but that’s from the desire for one more nibble rather than hunger – there’s enough of that plate for anybody, and at eleven bucks for a meal, it’s a deal.

You can get that chicken any time Poulet du Jour is open, because it’s pretty much unheard of for them to run out.

That isn’t the case at Dominique’s Kitchen in Redondo, where the chicken is just one entree among many rather than the signature dish of the house. I had seen it on the menu and tried to order it several times, only to be told that it wasn’t available. As I often dine late, I understand that some items sell out, but once I ordered just before 7 p.m. to find that the last two portions had just been ordered. Those happened to arrive at the table next to me, so I watched someone else eat the chicken I had been so curious about. They did so with gusto, so I resolved to show up even earlier next time. When I expressed that to our server, she let me know that they only make about 10 portions a day, but I could order the chicken when I made my dining reservation. I did, and it was someone else’s turn to be envious on my return visit.

Chef Dominique Theval grew up in Paris and follows a French culinary aesthetic that is very different from Arabic traditions. His chicken is rubbed with just a mix of olive oil, sea salt, and herbs de Provence before being roasted. The bird is basted with its own juices during the process, then topped with sprigs of rosemary that have been in the basting juice. It is served over a bed of roasted potatoes and sautéed spinach with garlic and purple onion. It’s a photo-worthy presentation. 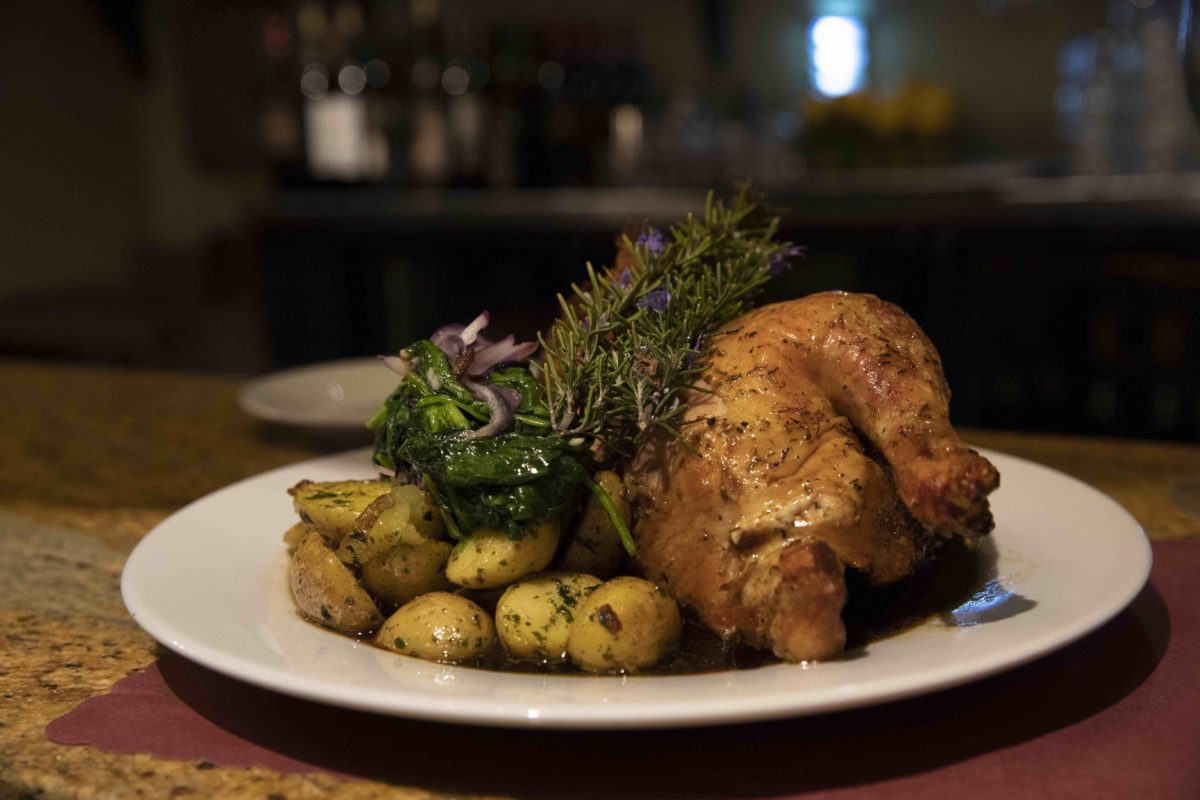 The first thing you notice about the chicken is that it’s big, obviously a more mature bird than most that are served around town. The skin isn’t crunchy because of the frequent basting, but it has a satisfying give and isn’t rubbery. This is a moist bird served at peak freshness rather than a crisp one that has sat too long. Perhaps because of the different technique, perhaps because of the more mature animal, the texture of the meat is a bit different too. It’s still juicy but a bit more firm, the differentiation between white and dark meat more noticeable. The simple flavoring enhances nature here – you can pick out the influence of the thyme, rosemary, and other green herbs if you think about it, or you can just blissfully enjoy the effect.

The roasted potatoes and spinach have the bright, fresh flavors typical of Provence, the polar opposite of the cream sauce laden dishes that caricature Parisian cooking. Dominique Theval excels at coaxing out the natural goodness of his ingredients, and it fits Californian farm-to-table ideas. The fact that this very generous meal will set you back only 19 dollars would be nothing short of miraculous, save for the fact that most of their menu is in the same territory.

It was only after I sampled the chickens from both restaurants that I realized that in each case the chicken was a canvas for two very different culinary aesthetics. Everything Dominique’s served on that plate fit together in the same way as the hummus and fattoush that accompanied the chicken at Poulet Du Jour. Each fits a different culinary trend in California, the natural ingredient-focused style of Dominique’s and the multicultural blend of Poulet Du Jour.

And which is best, you might ask? This is going to depend on who you are and what you like, because we’re talking about two different experiences here. Poulet du Jour serves almost nothing but chicken and falafel with salads and sides, while at Dominique’s, the chicken is only one great meal among a panoply of French classics. The no-nonsense Middle Eastern diner aesthetic of one may tempt me on one day, the romantic ambiance of the other on another day. I’m going to enjoy a really fine meal on either of those days..