El Segundo: Tapizon is a tapestry of flavors 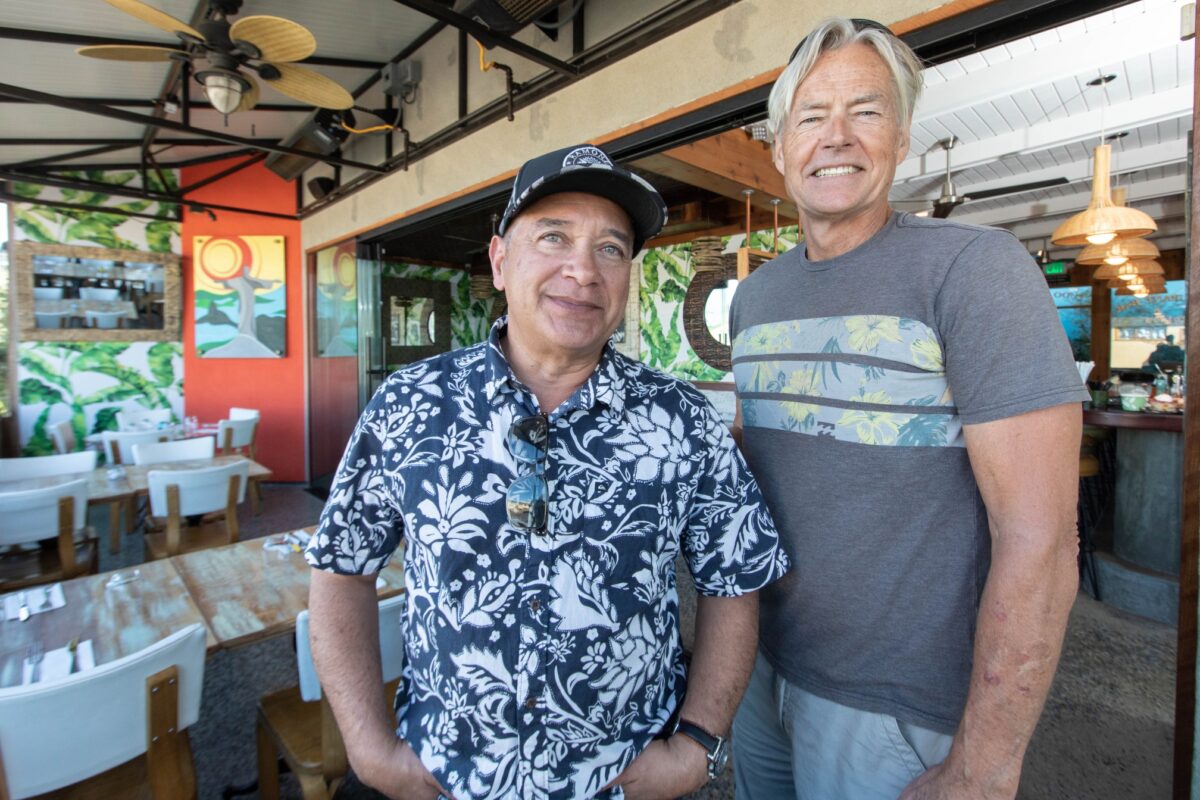 It’s oddly located and the signage is cryptic, but Tapizôn is worth searching for.

Sometimes I look at a restaurant’s location and presentation and my heart sinks. They may be making ambitious food and offering the best of service, but could they possibly survive on a lightly traveled street with poor signage? Some of them do, and the South Bay has successful eateries in pretty odd spaces, but the odds are against them.

The newest place in this category of unpromising locales is Tapizon in El Segundo. If you haven’t seen a sign with that name on it, it’s not your fault – there isn’t one. Instead, when you come to the corner of Main and Pine at the north edge of the downtown business district there’s a sign that reads “Ô Restaurant & Bar.” The logical thing to do if you’re curious about it is to look them up on Google, and you’ll probably search using the English O instead of the Portuguese alphabet version that uses the diacritical mark. Even if you do add it, that will be unproductive because Tapizon’s name doesn’t start with that letter. (The word means “tapestry” in Portuguese, in case you wondered.)

If you are the kind of person who is really curious about a restaurant that would identify themselves this way, you’ll probably park the car and stroll in. The closer you get the more you’re likely to be interested, because this is one of the prettiest, most elegantly decorated restaurants to open in recent memory. Colorful murals adorn the walls on the north side, some overtly related to Brazilian themes and some just beautiful. Each of the dining spaces has a different character, the outdoor patios a mixture of rustic and chic, alcove space cozy and secluded, the bar stylish and modern.

Someone has put a lot of thought and money into making these spaces welcoming, two someones in fact. Eric Petterson, a former chef at for the Caesar’s Entertainment group, and his partner Almir Araujo has run restaurants in Brazil and on the East Coast. The two of them remodeled the formerly dilapidated Main Street Café with a vision of presenting a fusion they call “Tropi-Cali Cuisine.” It’s an interesting idea that updates Brazilian home cooking rather than the churrascaria barbecue that is popular here. That barbecue is popular there too, but it’s something people enjoy for special occasions rather than everyday dining.

Those popular home cooking items include cheese rolls called pao de queijo, which are made with tapioca flour. Those rolls appear here in two forms: as a bun for sliders and other sandwich items, and cut into cubes and fried to make an appetizer called “cheesey dice.” You will see that appetizer on almost every table, because they’re irresistible. Americans are highly susceptible to just about anything involving fried cheese, and these fritters made with four varieties of cheese have an almost supernaturally light texture. They’re served with an açaí berry dip that has a little spicy heat, and delightful with or without it. 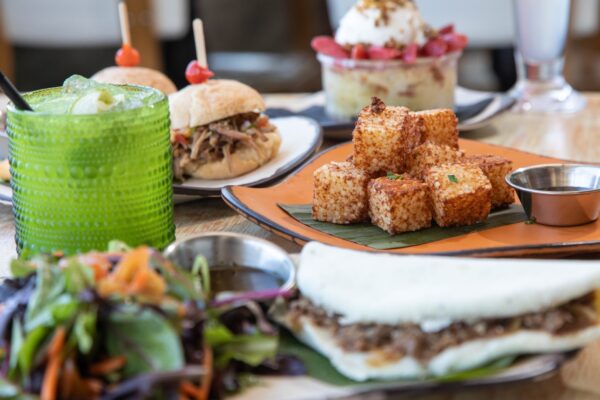 The tapioca that is used in those cheese dice and buns is in almost every dish here, including the crab and bacalhau served in a large seashell. Bacalhau is dried codfish and isn’t an obvious combination, to say the least. Bacalhau is famous for its slightly musky flavor, while good crab is delicate and fresh-tasting. The combination is surprisingly good when the two types of seafood are mixed with cassava puree, topped with a little cheese, and baked. The idea is similar to the French coquille St. Jacques, the effect quite different, fresh briny flavors and lightly funky overtones somehow in balance. It arrives with a small salad on the side, and it’s a good idea to alternate bites to reboot your palate.

The other appetizer we tried was their black bean soup, which is available by the shot or bowl. Either is available with a shot of cachaça, the low-alcohol Brazilian rum, on the side. Having a shot of bean soup sounds like a weird idea, but there is sense behind it. A shot of the soup is warm and coats your palate with richness, and chasing it with a shot of rum that has a slight vegetal character is an immediate cleansing. It’s a novelty, but an interesting one.

On that first visit for dinner we tried the smoked brisket tapi-tacos (tacos made with tapioca flour tortillas) and pulled pork sliders made with the pao de queijo buns. Tapioca flour, which is made from the root of the cassava plant, is gluten-free and when made into flatbreads is like a cross between a crepe and a flour tortilla, with a slightly spongy texture. If you’ve been to an Ethiopian restaurant and had injera, the crepe that is the base for every meal, it’s similar. The flavor is not particularly distinctive, but it’s an effective wrapper for food, in this case smoked brisket with tabasco glazed onions. The meat was slow-roasted with a different spice blend from American barbecue there’s some spinach in there with it, a preparation I’ve never seen in Brazilian food before. The Tabasco onions have about as much caramelized sweetness as heat, helping make it like no taco you’ve had before. There’s one big generously stuffed taco and a salad per serving, and along with an appetizer it’s a good light meal.

Similarly, the pulled pork sliders didn’t resemble typical sliders. Pulled pork usually is doused with a sweet and mildly spicy tomato-based barbecue sauce that accents smoky flavors, but Tapizon’s version contrasted mildly smoky porkiness with a grilled pinapple salsa. Grilling moderated the citric pineapple and brought out the sweetness, and when paired with the cheesebread there were some of the flavors of a Hawaiian pizza. The sliders were quite large and paired with yuca fries that were exceptional, because yuca is often starchy but these somehow were light and crisp. They don’t have a lot of flavor but are very good vehicles for the guava ketchup that are served on the side.

Tapizôn’s bar has the caiprinha that is mandatory at any Brazilian place with an alcohol license, along with beer, wine, and a few house special cocktails. These are on the sweet side as usually made but when I asked for them to back off on the sugar in their Tres Lima cocktail it was to my tastes. They offer Leblon or Avua cachaca in their cocktails and I strongly recommend the Avua, because it’s arguably the best on the American market. Avua is good enough to sip straight, and if you want to experience the nuances of this liquor that’s the way to do it.

We finished dinner with a trees leches cake, which was well made and conventional except for the topping of crumbled pistachio brittle. It was a nice touch and added texture to a dessert I often find a bit sweet and boring.

We returned to Tapizôn for Saturday brunch and tried their salmon benedict and feijoada, the Brazilian stew of black beans with smoked meats and sausages. Feijoada is always served with some separately cooked greens, white rice, and farofa, toasted cassava that has a flaky crisp texture and nutty flavor. Here they also put a tart tomato salad and some orange slices on the side, so there are a lot of flavors on the plate. This feijoada itself was light on the garlic and spices compared to some that I’ve had, but with all the add-ins it was very good. 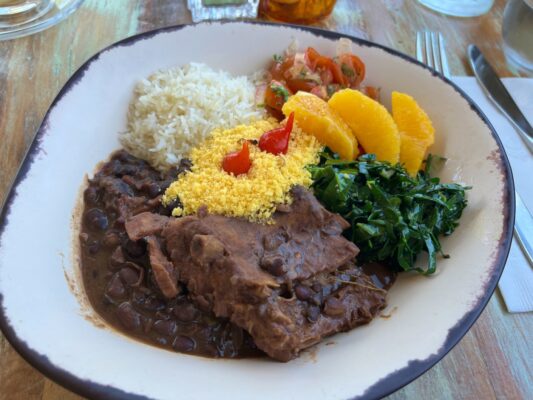 The Brazilian smoked meat and bean stew called feijoada is offered only on weekends. Photo by Richard Foss.

The benedict that my wife ordered was even better thanks to that light cheese roll instead of the usual English muffin, which was well complemented by the housemade hollandaise sauce. “I want all of my Benedicts made with this bread now,” exclaimed my wife on first tasting it, and I understand why. The Benedict was served with yuca fries and guava ketchup, and what looked like a small portion was so richly flavored to be quite sufficient.

At breakfast they offer regular coffee or Brazilian coffee, which is roasted very dark and made very strong. I generally prefer lighter roasts, but it was a bracing way to start the morning.

Breakfast for two ran $53, dinner for two with two drinks $95, quite reasonable for food of this quality and topnotch service. It may take a while for Tapizôn to catch on given the odd location and oblique signage, but once people find it, they’ll be back.

for more restaurant reviews check out our dining guide at easyreadernews.com