A view of Vista in Hermosa Beach 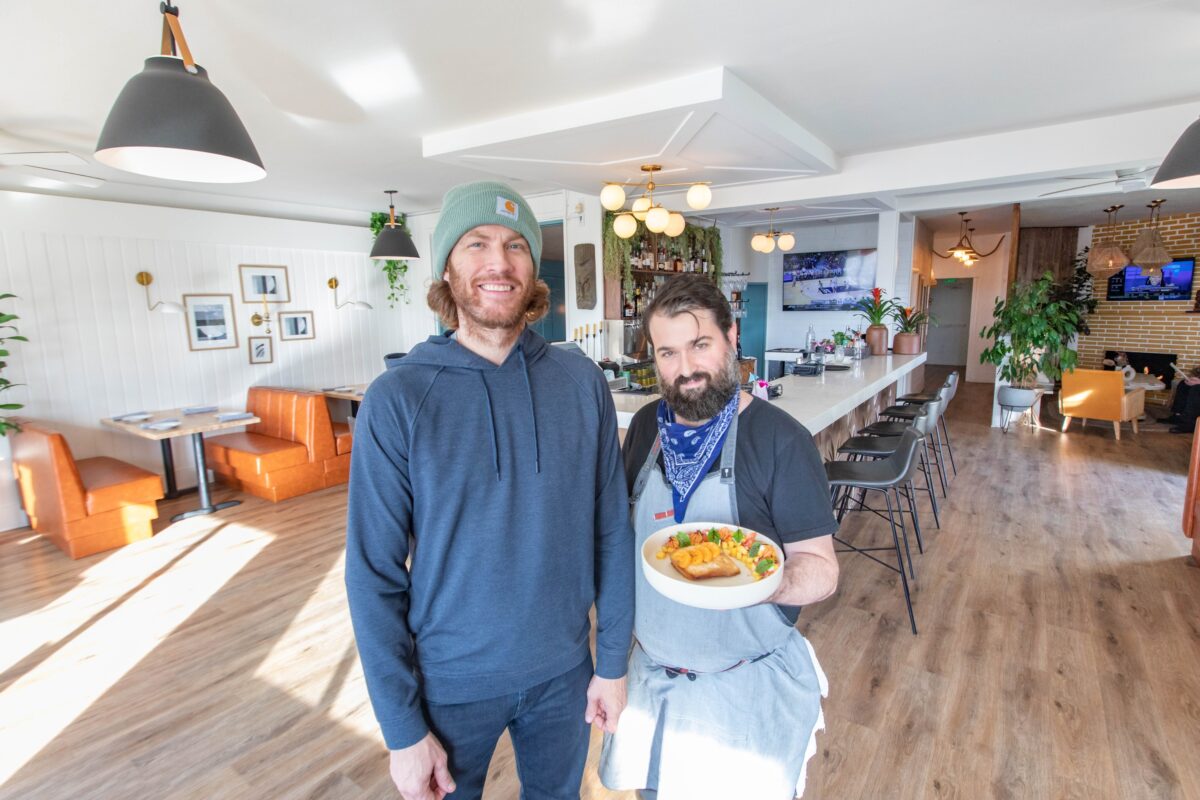 The Mermaid’s replacement has a surprisingly distinctive character

I love it when restaurants surprise me with ambitious food in odd locations. Finding a great little eatery on a residential side street, in a mall, or in some other unlikely spot is thrilling, a sign someone is so confident about their cuisine that they believe people will go anywhere to get it.

It’s also impressive when a place that could coast on their location doesn’t. A case in point is the former Mermaid, which survived for decades serving simple steaks and seafood by the beach. It seemed likely that whoever took over the location would stay with that safe concept, and two short-lived successors with gimmicky concepts seemed to prove the wisdom of sticking with a menu of proven crowd-pleasers.

When the second of these operations closed, I expected another seafood and steak palace to take over. Instead, the South Bay got Vista, a decidedly quirky spot that offers an original take on Asian fusion food. Chef Drew Adams used his training in French restaurants to reimagine tiki bar food with modern sophistication.

The restaurant has the same layout as ever, which puts the bar front and center in the main room with a cozy alcove to one side and a few tables along the corridor behind it. The acoustics are dreadful but the music isn’t blasted the way it was under the previous tenants, which is a small blessing. The décor is minimalist but has nods to mid-century style, though with some odd decisions like the use of ugly and uncomfortable metal chairs at some tables. The space doesn’t have much character, but is sleek and modern and quite different from anything else on the Plaza.

The menu is different too. Steak and seafood are on the menu, but they’re adorned with sauces like shishito pepper chimichurri. There are also unusual combinations like scallops and pork belly with cauliflower, fresno chile butter, and scarlet begonias. (I didn’t know begonias were edible, but the petals apparently have a mild, citrusy flavor. I haven’t tried them yet because I didn’t order that dish, but it’s on the list for my next visit.)

There were plenty of unusual flavor combinations in the three visits I’ve made. Some were amusing novelties, like the crispy popcorn cauliflower appetizer. I expected this to be like the popular popcorn shrimp, which is just fried shrimp in a batter that includes both wheat and corn flour with creole seasoning. The cauliflower nuggets were fried in that batter, but then tossed in a Southeast Asian fish sauce and served with real popcorn, cilantro, and bits of fresno chillies. It’s an odd combination that works well, though there are items on this menu that I liked better.

One of these is the crab guacamole, which is just what it sounds like – lumps of crab meat in an avocado mash that gets some tartness from Japanese yuzu rather than the usual lime or lemon. It’s a simple idea that I haven’t seen elsewhere, and it’s addictive. I’d prefer standard chips for dipping rather than the crackers that are provided, which have a nice flavor but are too fragile to pick up much guac without shattering.

The best of the starters I’ve tried was the scallop crudo, raw scallop sliced thinly and dressed with yuzu ponzu sauce, crispy garlic, and finely powdered herbs, topped with micro-greens, edible flowers, and a few drizzles of chili sauce. As I write this it sounds like too many things going on at once, a preparation guaranteed to overwhelm the flavor of the shellfish. It isn’t. Somehow you taste all of these ingredients while processing the almost gelatinous texture of shellfish contrasted with crunch of garlic and salad. It’s a showcase of the palate of this chef, who seems to be in love with citrus, spice, and heat and finds ways to combine them inventively.

That aesthetic is also present in the hearts of palm salad, a mix of that crunchy vegetable with Maui onion, edamame, cucumber, and jicama that arrives wrapped in shaved cucumber so it looks like a burrito. Shaved scallions and fresno chillies add color and sharpness, as does a sprinkling of poppy seeds. The damp crunch of palm and cucumber with the sharp flavors of poppy and peppers was very refreshing, and I’d wish for a salad like this on a hot day.

The kitchen kept up their winning streak with two of the three main courses we tried, the Huli Huli chicken and pan roasted halibut. The chicken had a clear debt to tiki bar ideas, thanks to a last minute toss through a glaze of honey, pineapple juice, chillies, spices, and toasted garlic. It’s a sweet and sour sauce for grownups, and it also tops the roasted pineapple that is served on the side. I wish they had skinned and cored the pineapple before serving so it would be less of a challenge to eat, but it was delicious enough to be worth the effort. This dish really should be served with rice to sop up the sauce, because I didn’t want to waste a bit of it. 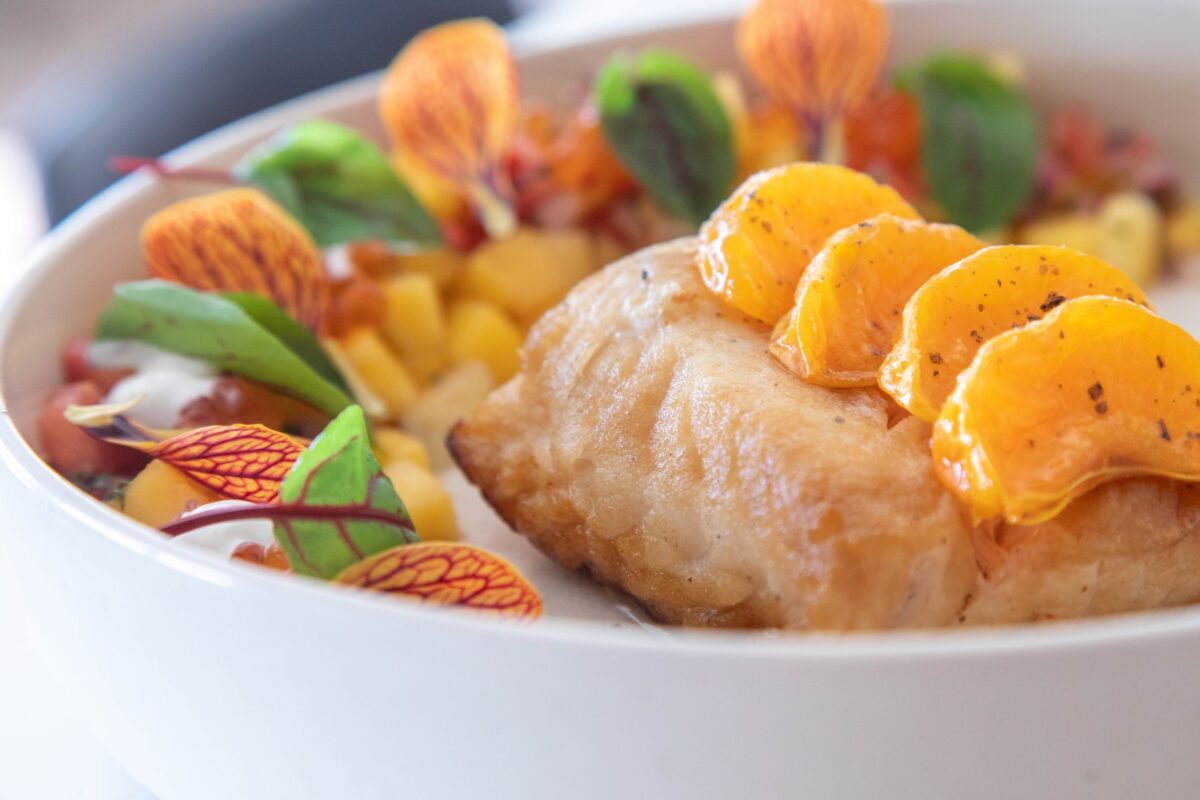 The Vista halibut is roasted and given a ginger-citrus glaze, with mango pico de gallo with chillies and fish roe.

The halibut was a bit less complex in concept, the fish roasted and finished with a ginger-citrus glaze and clementine segments, but what put it over the top was the mango pico de gallo with chillies and fish roe. The house style of citrus and spice was perfectly executed here, and again we wished for rice so we could have polished off every bit.

The only item that was unsuccessful was the kalbi short ribs, which were overcooked so that the char on the outside overwhelmed the flavors of the marinade. The ribs were served with a tangy Korean ssam sauce, shiso leaves for wrapping the meat, and a root vegetable salad with sesame dressing. It wasn’t the equal of our other dishes in concept or execution.

If you’re a cocktail fan, you should give the ones here a try, because they’re well-made though the house drinks lean to the sweet side. The mai tai is the classic, very well executed, and the Peachy Monkey, made with scotch, peach liqueur and bitters, lemon, and honey, is a fine and balanced drink. The bartender shared a special he recently concocted, horchata with peanut butter whiskey, which I expected to dislike but found delightful. An artist can make something fine out of even a novelty ingredient like that whiskey, which I had previously regarded as undrinkable.

Vista needs to work on several aspects of their business, starting with communication – they rarely answer their phone and don’t have a reservation tab on their website, so at the moment you just have to walk in and hope they have space. Taking down the speakers over the rear tables would be another good move – the place is plenty loud without them, and it was hard for our server to hear us and vice versa. These are small things but affect diners’ decisions about eating there in a big way. Those who put up with these glitches may enjoy a genuinely original dining experience with a view of the beach, and that’s a rarity to be celebrated.