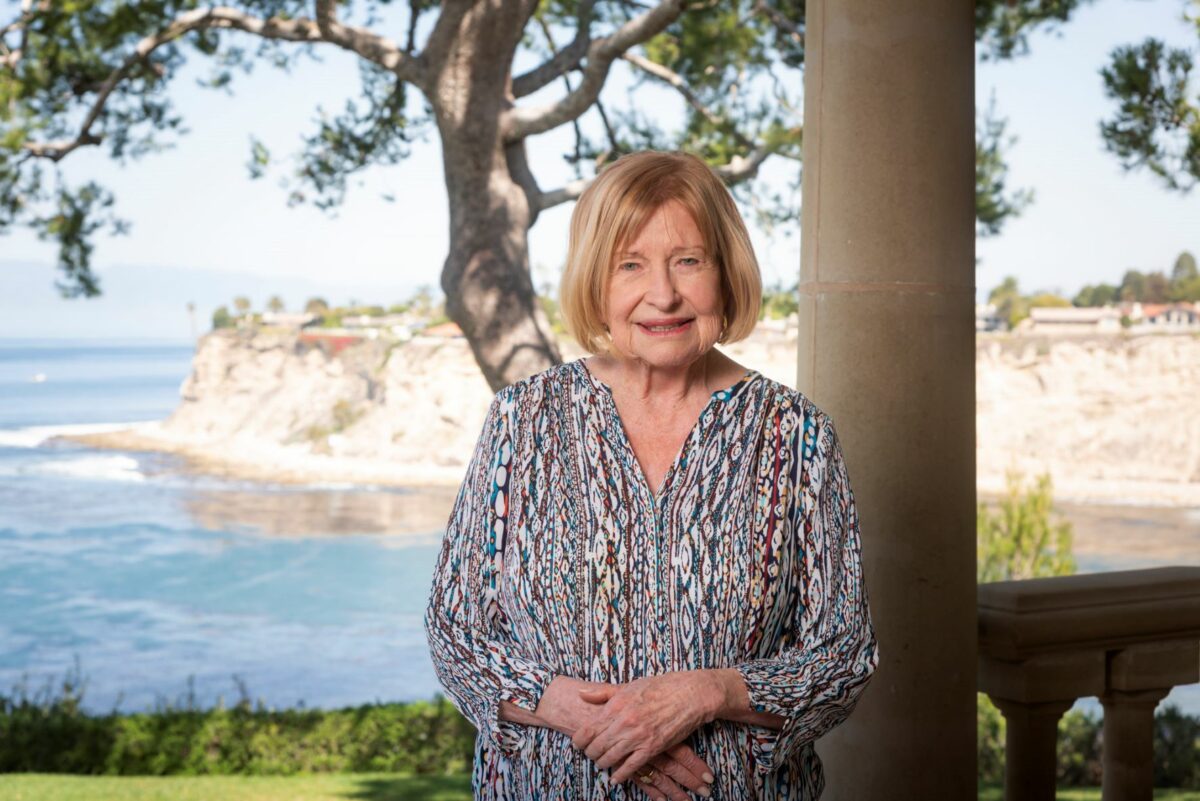 Carolyn Elliott with a view of Lunada Bay behind her. Photos by Tony LaBruno (TonyLaBruno.com) 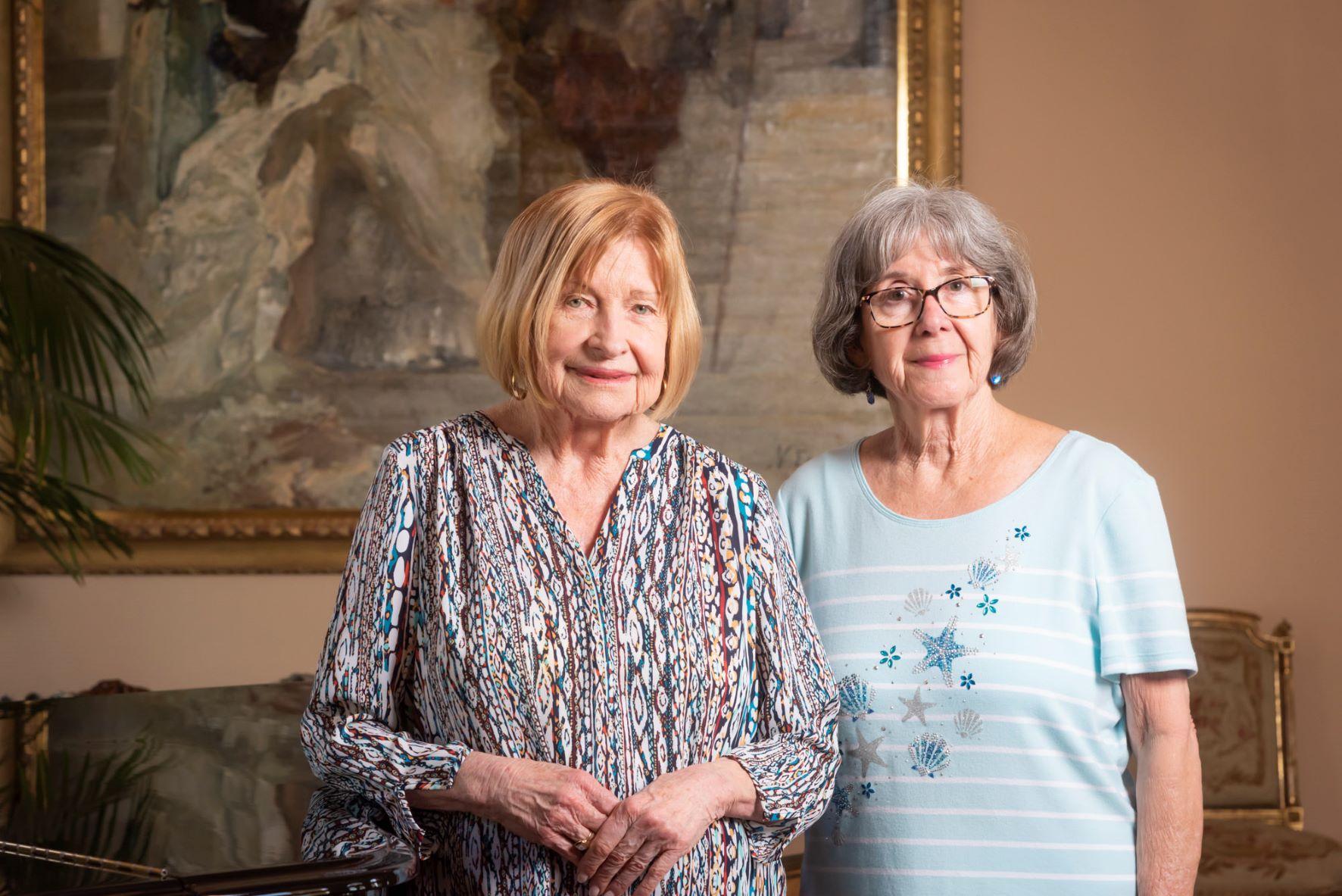 For the past three decades, Carolyn Elliott has made her spectacular Lunada Bay estate available for charity fundraisers, and cultural events, personally greeting the hundreds of guests who contribute to these important causes.

“I like to have people here and have them enjoy it,” Elliott said of her breathtaking surroundings. “What good is this place if I just sit here by myself, or with my daughters?”

Elliott and her late husband, developer Julian Elliott, built the bluff side home, which includes tennis courts, a pool, a guest house and formal gardens.

Organizations that have benefited from Elliott’s hospitality include the Los Angeles Philharmonic, Japanese American college students from Changing Tides, and the Providence TrinityCare Hospice Foundation.

Sunday by the Sea, a food and wine tasting benefit for Providence TrinityCare, will take place in-person this year, on Sunday, May 1, after two years of  virtual and drive-by “gatherings.”

Brett Beck, executive director of the hospice foundation, said the splendor of Elliott’s home and grounds is a big draw for attendees.

“I don’t know of too many people who say, ‘Oh, yeah, you can bring 600 strangers to my house, use my bathrooms, step on my lawn,” Beck said.

“Oftentimes people of her wealth and stature will write a check. She gets involved.”

By opening up her home, Elliott, 86, is saving the foundation thousands of dollars.

A similar event on the lawn of the South Coast Botanic Garden would cost around $20,000, Beck said. Now that money goes to the foundation, which provides hospice and palliative care for 4,000 patients, and their families in Los Angeles and Orange counties. Established in 1977, it was one of the first hospice programs in the country.

Playing a difficult role is not unfamiliar for Elliott. Before meeting her husband, the single mother of two, owned and ran a preschool in Manhattan Beach. In the 1960s women were just entering the workforce and Elliott provided stability for working moms who entrusted their children to her care.

“I would go around in my green VW bus and pick up two or three kids before my school opened at 7 a.m.,” she said.

She also took night classes at UCLA, and soon doubled enrollment to 40 students.

“No matter what happens, you have to find a way to make it work,” she said, reflecting on that time in her life.

She was introduced to her future husband by a mutual friend, a Realtor from the Dolphins Junior Women’s Club. She said they had felt an immediate connection and talked for hours. Then he told her something she would never forget.

“He said ‘I don’t want to meet a nice girl like you right now, because I’m not ready to get married,’” she said. “I thought ‘Who says that to a girl you just met?’”

They didn’t see each other for two years, but she always remembered the charming, and kind former UCLA football player. They eventually reconnected, and dated for several years before they were married. “He was so sweet, so good natured and kind,” she said of her husband.

Elliott built his wife a new preschool, which she grew to 150 students with 17 employees. “He built me a school and handed me the mortgage,” she said. “I think he got the best of that deal.”

The couple, who had been living on The Strand in Manhattan Beach, decided to move to Palos Verdes. She sold the preschool in the 1980s and devoted time to helping with her husband’s business. It was then she decided to get involved with charities, hosting events for the Asia America Symphony Guild, and LA Challenge, which provides scholarships to high school students in underserved neighborhoods.

There’s a lengthy to-do list for the May 1 event, which includes power washing the tennis court, and providing enough electrical outlets for the caterers. But Elliott and Gloria Mata, Elliott’s management assistant for 42 years, have hosting down to a science. Mata works behind the scenes, overseeing the work.

Elliott still manages her family’s mobile home parks — nine in California and one in Arizona. She also builds homes in Manhattan Beach with developer David Odell.

But her favorite activity is meeting people during events at her home. PEN