A work in progress works well at a Manhattan Beach Cafe 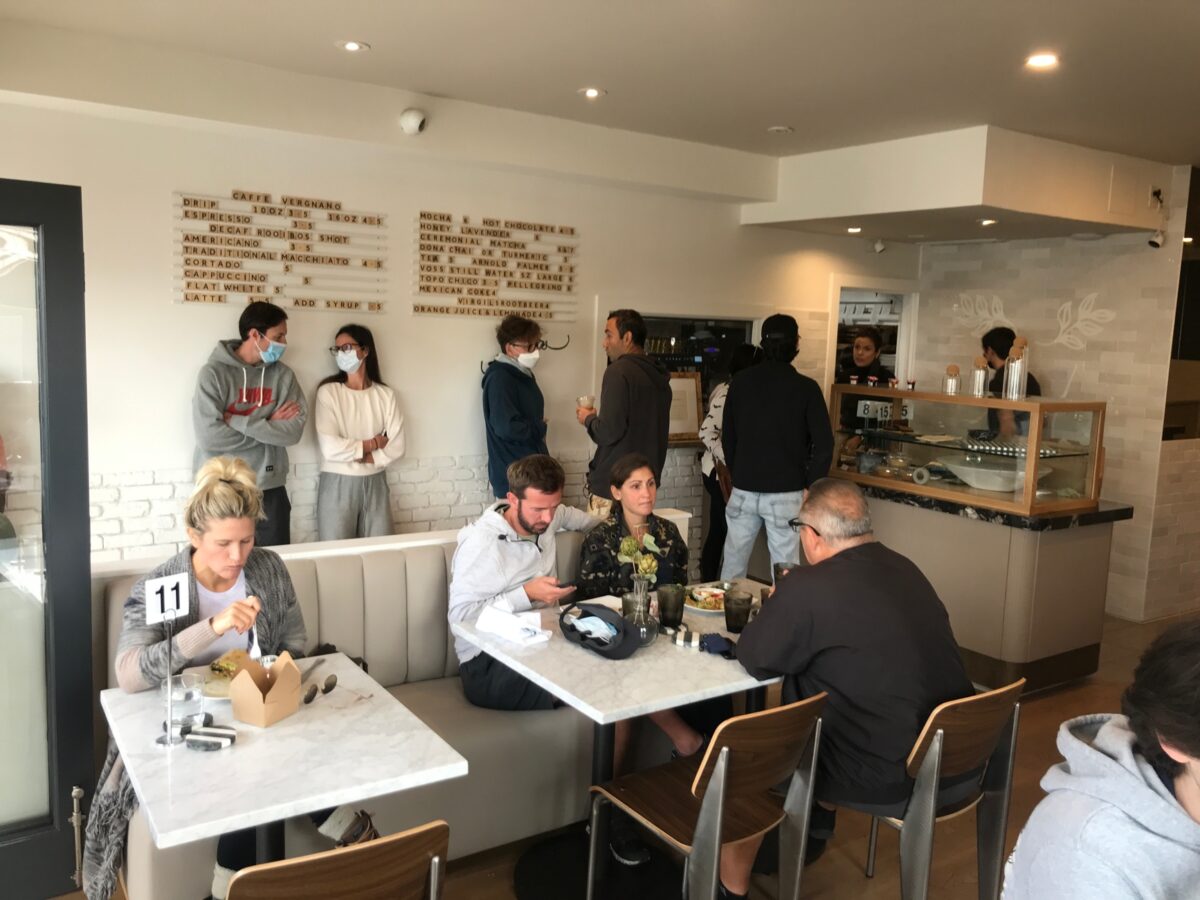 Owner Gina Altamura helps a customer at the counter at Un Caffe Altamura in Manhattan Beach. Photo by Richard Foss

I knew an artist who was extremely secretive about works in progress. She would flip her sketchbook over when I came into the room so I couldn’t get even a glimpse, and more than once I was on the receiving end of an annoyed, “Don’t look at that, it’s not fiiiiinished.”

I get that some people only want their ideas evaluated when they’re fully formed. In the restaurant business that translates to “soft openings” to get the staff trained and the operation up to speed. That makes sense when done for a short time, because sensible operators don’t want to be slammed on day one, when the servers are trying to remember where the forks are stored, and the cook is finding out whether that fancy plating is really practical.

It’s odder when a business regards its operations as temporary after being in business for months, but that’s what’s happening at Un Caffe Altamura in Manhattan Beach. It’s no secret that the place is open, because they’re in a high visibility space next to The Kettle, and everyone who passes by sees the customers dining outside. But their website is blank except for a promise that they’ll open in Fall 2021. They actually started serving in July, that’s strange. Apparently owner Alexa Altamura doesn’t consider the restaurant to be finished until their wine bar is serving, but since they don’t yet have a license it’s anybody’s guess when that might happen.

In fact, their breakfast and brunch has attracted quite a following, as evidenced by the line at the door almost every day. Don’t be intimidated when you see those people waiting, because here you order at the counter and it’s just inside the entrance – there may be empty tables inside. Menus are available by the door, and smart diners will study them while waiting rather than making up their mind while standing at the counter.

One of the few bits of information on the website describes Un Caffe Altamura as “the beautiful marriage of simplicity and quality,” and that’s actually a good description. Most offerings are upscaled classics with ingredients from premium purveyors, but there are a few Italian-influenced selections that hint at what the place will be serving once the wine bar opens.

One item that fits that profile is the pear-thyme salad, though in Italy the pears are usually paired with arugula, or dandelion leaves, rather than the baby kale, raw shallot shavings, and assorted greens here. Both pear and apple slices had fruit sweetness to offset the slight bitterness of those greens, with some funky gorgonzola cheese, and herbed chicken breast in large pieces so you could add them as you wished. A sprinkling of lemon zest adds citrus notes, which tie in well with the pear vinaigrette. The only discordant note was the serrano chillies that had been added with a heavy hand, and which we thought overpowered the other flavors. Unless you really love pepper heat, I suggest you have them leave this out, or ask for them on the side. 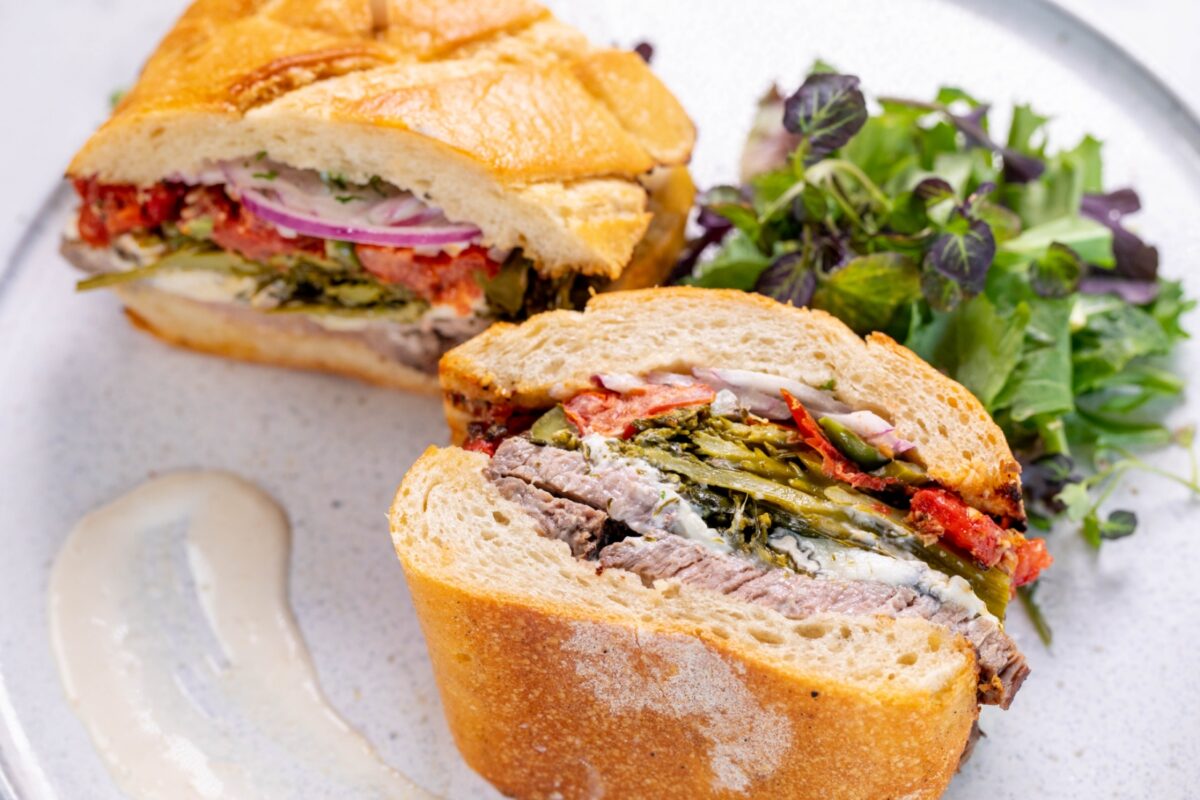 The other lunch items we tried, a steak sandwich and salmon on brioche, had no such flaws. The marinated tri-tip was tender and flavorful, and the layers of broccolini, broiled tomato, chopped olives, red onion, and Humboldt Fog cheese between slices of toasted baguette lent a wide variety of textures, and flavors to the sandwich. Horseradish cream was included too, but it wasn’t necessary unless you can’t imagine steak without horseradish. The salmon had the same layered effect with red onion, cornichon, dill, watercress, and aioli. But despite the number of ingredients, the quality of the sashimi-grade fish was evident. The fish was medium rare and very moist, so if you like your salmon well-done with a crust on it, let the kitchen know when ordering. Both sandwiches come with salad, but you can substitute French fries, and if you like fries Belgian style and very crisp then you should take that option.

On another visit we invited friends and had breakfasts of a French omelette, vegetarian breakfast burrito, croissant breakfast sandwich, and their signature potatoes with bacon and eggs. Those potatoes seem to be roasted and then sauteed with onions, capers, and a whole lot of herbs, and they’re quite good. I wouldn’t recommend them if you’re on a low salt diet because of the capers, but those add a pickle-ish tang that sets these apart.

That egg, bacon, and potato breakfast is their take on an American classic, while the omelet presents simplicity, French style. The omelet is just a buttery folded egg pancake with herbs and sea salt they somehow make it incredibly light and fluffy. It arrives with grilled bread, salad, and a fresh fruit medley, and that’s all it needs. In French tradition an omelette can be eaten at any time of day, including as a dessert, and this one was a reminder of just how good one can be even without all the stuff that Americans cram into them. 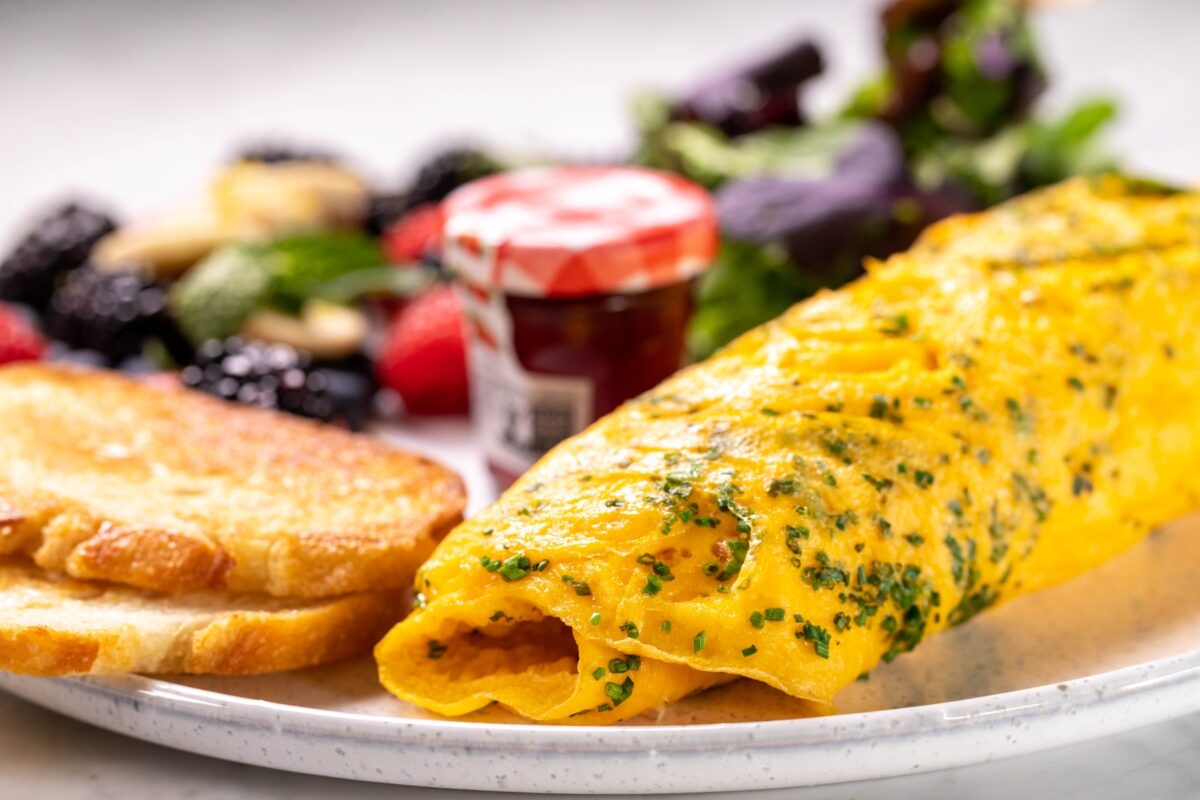 Un Caffe Altamura’s French omelette is a reminder of just how good one can be, even without all the stuff that Americans cram into them. Photo by JP Cordero

The breakfast croissant is a mash-up of French and American ideas. The version here does what Un Caffe Altamura does with everything – use boutique ingredients and layer the flavors. In this case those are eggs, bacon, arugula, sun dried tomatoes, pesto and aioli. This was the only item where I think they went a bit overboard – did this really need both the aioli and the pesto? I think I’d have preferred just the pesto, and may order it that way next time.

The vegetarian breakfast burrito was a standout in creativity as well as flavor, stuffed with egg white, asparagus, spinach, tomato, avocado, pesto, and feta. It’s probably the least Mexican burrito I’ve ever had, but was a remarkable and satisfying combination.

To pair with meals they offer a variety of soft drinks and excellent coffee, though I should note the coffee service has been a bit slow on both visits. They use a quality Italian roast that is bracingly strong, and make very good espresso drinks.

Un Caffe Altamura is offering premium quality ingredients in a high-rent area, and the prices reflect that – you’ll pay around $25 per person for breakfast or lunch with coffee. For those who enjoy a luxurious handcrafted meal to start the day, it’s worth it. I can hardly wait to see what they do when the next chapter of this operation opens.