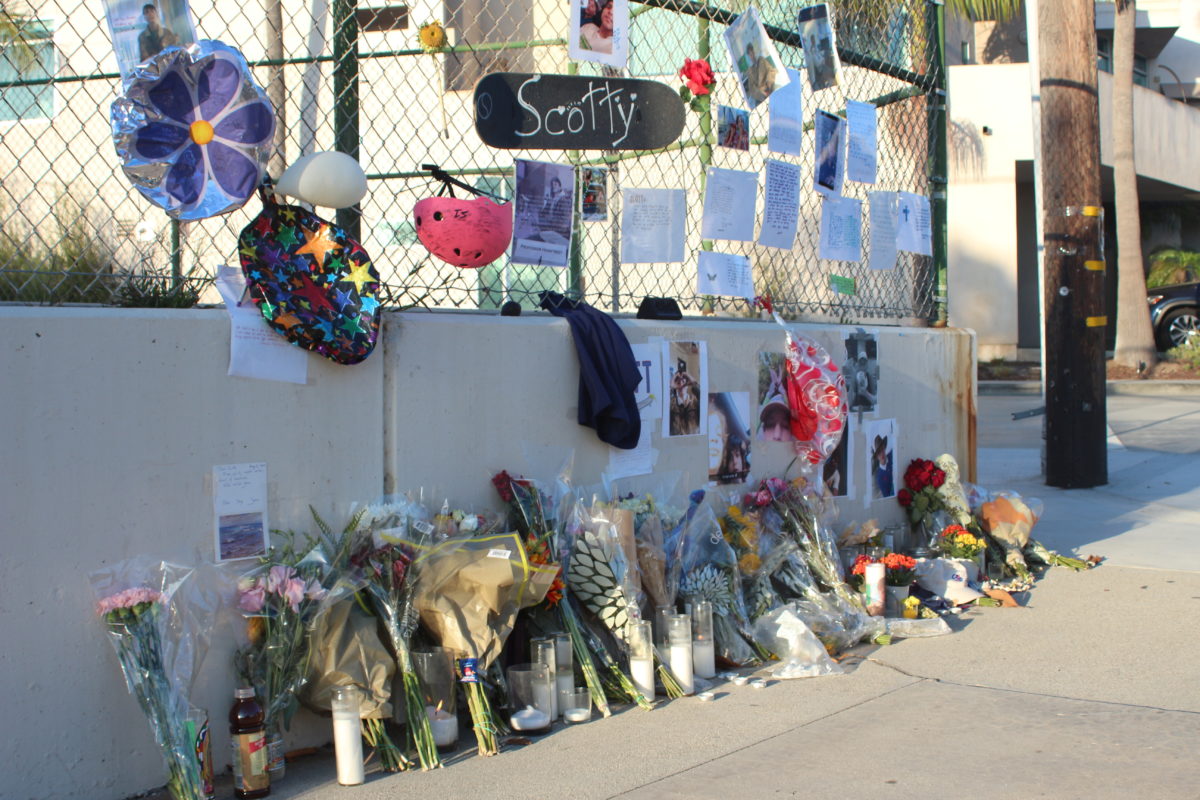 A memorial for Scotty, who died Aug. 3, at Edith Rodaway Friendship Park. Photo 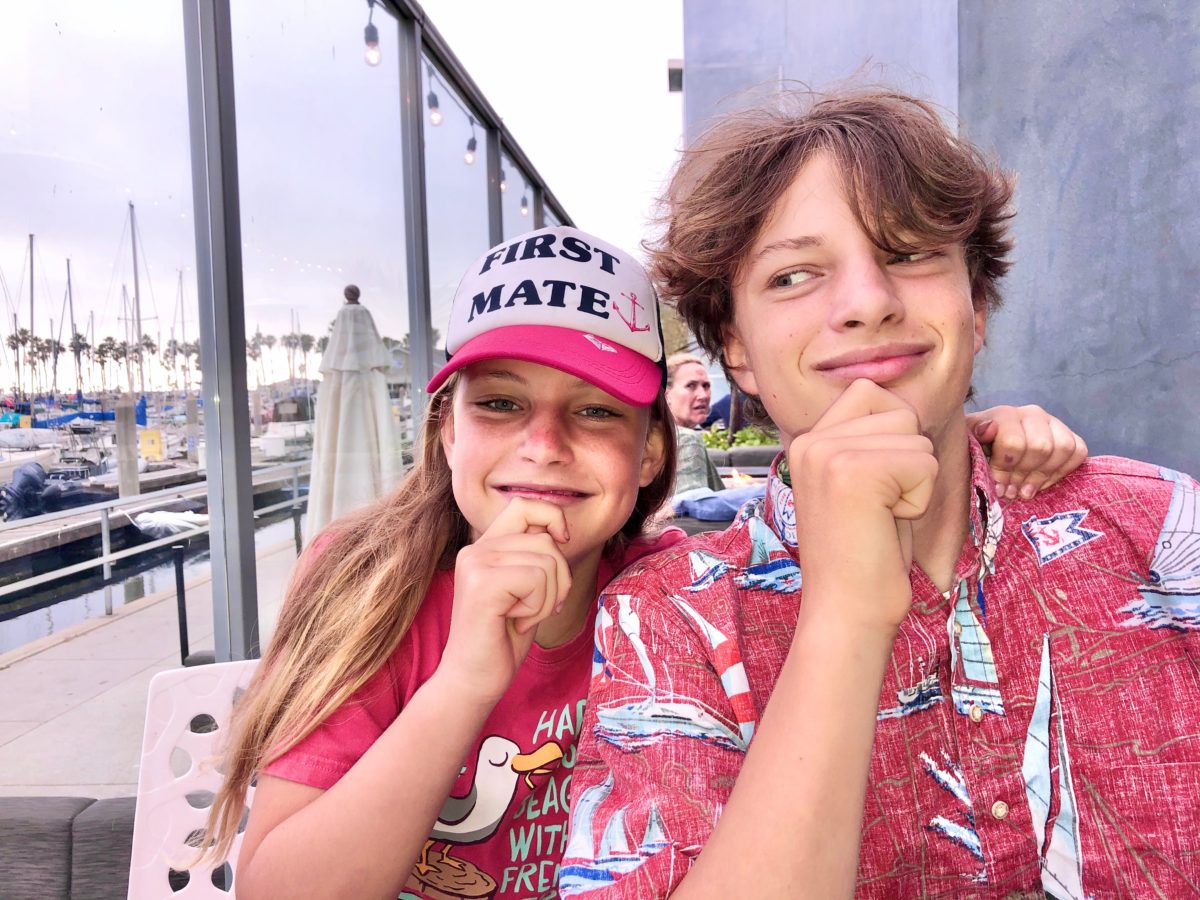 Scotty Hemstreet and his sister Juliet, in a photo taken earlier this year at Shade in the Redondo Beach Harbor, where Scotty often enjoyed sailing. Photo by Keith Hemstreet

Scotty Hemstreet, a 14-year-old Hermosa Beach resident, died earlier this month from an accidental drug overdose inside an east Hermosa home. Friends and family recalled Scotty as funny, wickedly smart and often the center of attention, a person who was happiest in motion, either sailing over the ocean or with a skateboard under his feet. His parents hope his passing will highlight the dangers of pharmaceuticals, and the counterfeit pills that have emerged as one of the deadliest scourges of the opioid epidemic.

Scotty died the morning Aug. 3 in the house next to the one he lived in. The owners were out of town at the time, and the Hemstreet family had agreed to watch over it and feed the family’s cats, Hemstreet said. Scotty and several other kids went into the house at some point the night before.

When he woke up in the morning, Hemstreet saw that his son was not in his bed. Scotty occasionally got up early and took walks around the neighborhood, so Hemstreet was not immediately concerned. He took his daughter, Scotty’s sister Juliet, to a day camp at King Harbor in Redondo Beach, and when he returned later that morning he saw paramedics parked in the street. Hemstreet said his wife, Ana Fradkin, later told him that while he was gone one of the kids who had been at the gathering where Scotty ingested the drugs knocked on the Hemstreets’ door and explained what had happened. Other kids who were there were nearby, speaking with police, and paramedics were still attempting to revive Scotty at the time Hemstreet returned home.

According to the Los Angeles County Coroner-Medical Examiner’s office, the cause of Scotty’s death remains under investigation. His father said the coroner told him a toxicology report could take at least two months to complete, but police had told him the cause of Scotty’s overdose was “probably Xanax. Bad Xanax, or fake Xanax.”

Because of Scotty’s age, the Hermosa Beach Police Department was unable to confirm details about his death. Bill Bodner, special agent in charge of the Drug Enforcement Agency’s Los Angeles office, said Xanax, the brand name for the anti-anxiety drug alprazolam, is one of the two most commonly counterfeited drugs the agency encounters, and as of late Mexico-based drug cartels have been manufacturing it using fentanyl, a synthetic opioid. He described overdoses by people who mistakenly believe they are ingesting Xanax as “extremely common.”

“The thing that I always hear, and that I try to correct, is there was ‘Xanax laced with fentanyl.’ In reality, that tablet has no quote-unquote Xanax in it. It’s a counterfeit Xanax tab made in Mexico, and the only active ingredient in it is fentanyl,” Bodner said.

Fentanyl is, by weight, between 40 and 50 times more potent than heroin, Bodner said, and two standard-sized counterfeit Xanax pills can contain more than enough fentanyl to kill the average person. Because it is packaged as a corporate pharmaceutical, people vastly underestimate the danger. Bodner said that in the last year his office has seized about 450,000 pills that were made to look like a legitimate pharmaceutical product but were actually counterfeits made of fentanyl.

“And when I say ‘made to look like,’ I mean proper shape, proper size, proper coloring and tint, proper stamps and die markings on the pills. So it’s extremely difficult for someone to know, especially in a situation like a party, what they’re taking,” he said.

Scotty’s overdose came as a shock to his family. Hemstreet said his son had never stayed out all night, and that while Scotty had “done some experimenting,” he was unaware of any serious drug use.

Taft Buckley, a Redondo Beach resident heading into his senior year at Redondo Union High School and has known Scotty for more than eight years, said he punched a hole in a wall in his bedroom when he heard about his friend’s death.

“I’m mad at him. I know he’s better than that,” Buckley said.

Buckley, a competitive sailor who has competed in European regattas, met Scotty at the King Harbor Yacht Club, where Scotty was on the youth sailing team. Last fall, they sailed together at a two-man race in Monterey, placing in the top five out of more than 30 teams.

He described Scotty as wise beyond his years, with an intelligence that sometimes came out as precocity. Although he was the younger of the two, it was Scotty who provided consolation and wisdom about matters of the heart, and Scotty was “like five grade levels ahead of me” in math, Buckley said. As a high school freshman, Buckley recalled, his friend was already dabbling in the stock market.

Buckley said Scotty had “some mischief in him,” and was frank about his worries that his friend had fallen in with the wrong crowd. But Scotty’s death is all the more confounding to Buckley because he seemed to enjoy life so much.

“Scotty was happy. He never, ever once told me about being sad,” Buckley said.

A memorial for Scotty, who died Aug. 3, at Edith Rodaway Friendship Park. Photo

Scotty attended Redondo Beach Learning Academy, in the Redondo Beach Unified School District. Nicole Vurusic was Scotty’s teacher last year, and recalled that Scotty was so intelligent — and so willing to help his peers when they were struggling — that the class had crafted a small nameplate for him that read “Professor Hemstreet.”

“Sometimes he would hear me explain something and he would look at the other kids, and if they still weren’t getting it, he would try to chime in and explain it a different way. He had really good number sense, and he could help visualize things. He was just able to explain in a different way that made it a lot easier for certain kids,” Vurusic said.

Vurusic said that, since Scotty’s death, she has been in touch with his classmates on a video conference, and that Scotty’s accidental overdose had prompted both grief and self-reflection.

“They come from such a wide background of experience, but I think that for a lot of students who ever even tried anything, to them it was like, ‘Scotty’s probably the smartest out of all of us, and if something like this could happen to him …,’” she said. “I hope for them it was a wakeup call that, really, it could be anyone, at any time, for any reason.”

Like others interviewed for this story, Mark Hansen, a Hermosa resident and staff commodore at the King Harbor Yacht Club, described Scotty as full of joy. He recalled a day when Scotty was 10 or 11 years old and had just finished sailing team practice. Scotty and another friend asked Hansen if they could take out Hansen’s 13-foot catamaran. Though it would be their first time on that style of boat, Hansen agreed, and went to the club’s upper deck to keep an eye on them. The two sailed around, then docked, but assured their parents that they were not done and had only come in to use the bathroom. They went back out sailing and returned again, this time explaining that they were just getting something to drink. They went out and returned a third time. Scotty, obviously extremely cold from the long exposure on the water, wanted to go out once more, but his parents finally brought the adventure to an end.

“Their teeth are chattering. The kids are turning gray and blue, and they’re saying, ‘Can we go back out on the catamaran?’” Hansen recalled with a laugh, speaking in a mock stutter to mimic the clipped speech of a kid so enraptured as to be unaware of his own discomfort.

In the ensuing years, Scotty would ask to take out Hansen’s catamaran whenever he could, even if there was barely a breath of wind. Hansen found himself taking a liking to Scotty because the young boy’s outgoing and friendly personality seemed so well suited to the social environment of sailing. Scotty, he said, seemed capable of getting along with anyone. He was often the “ring leader” of a group of young sailors at the Yacht Club, but seemed equally comfortable among adults. Hansen recalled taking his dog for a walk on Halloween and passing by a neighborhood haunted house thick with trick-or-treaters. Most kids ignored him, but invariably a costumed voice would cry out “Hi Mark!” and he knew it had to be Scotty.

Other adults also recalled Scotty’s maturity and considerate nature. The home of Hermosa resident Danielle Sokol is near the Hemstreet household, and contains a skateboard halfpipe built by Sokol’s husband, which meant a gaggle of children were always coming and going. Scotty, easy to pick out with his pink Converse shoes and pink backpack, also stood out from the other kids for his way of engaging with adults.

“Every single time, he stopped to talk to you and asked you how you were,” Sokol said. “If you lined up all the kids and asked parents who was the most, the sweetest kid, everyone would pick Scotty.”

Sokol’s son Luke, a good friend of Scotty, saw him the day before he died, passing by him while Scotty was riding an electric bicycle. When he first learned that his friend had died, the news didn’t seem real. Once it sank in, he took the deck of a skateboard that Scotty had given him in the sixth grade, and tied it to the chain-link fence at Edith Rodaway Friendship Park, where they often hung out. The board – with “Scotty” written in white against the black grip tape — became the first item in what has since grown into a memorial with flowers, votive candles, and laminated missives from friends. Luke said he had been inspired to start it because, “I know [Scotty] would have done it for any of his friends if something had happened to them.”

Scotty’s father has periodically stopped by the memorial, which has served as a tangible testament to the breadth of influence that his son had on his peers. One friend, Emma Tallman, who knew Scotty from sailing, left a note recalling his “infectious” smile, and his ability to calm her down when she was stressed or scared.

“He obviously touched a lot of kids’ lives,” Hemstreet said of comments like Emma’s. “That’s what you want to hear as a parent.”

A memorial paddle-out for Scotty Hemstreet was held Friday at Second Street in Hermosa Beach. In lieu of flowers, the family is asking that donations be made to the South Bay Children’s Health Center.