After a decade of conflict over Sand Dune Park, Manhattan Beach forged a lasting peace 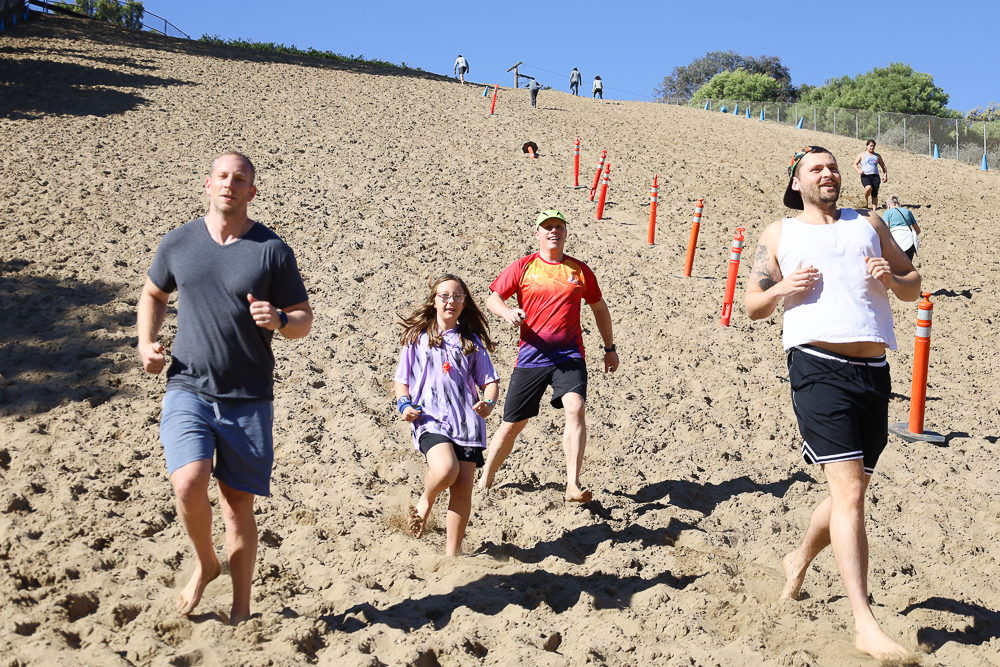 Over the past six months, Manhattan Beach’s public works department removed 100 tons of dead vegetation, planted 320 trees and plants, installed new irrigation, and refurbished the utility building at Sand Dune Park. And trucked 650 tons of sand from the bottom of the dune, and dumped it at the top of the dune.

Saturday morning, the public was invited to an “open house” at the park to celebrate the improvements. Among the small gathering were Manhattan Beach Mayor Steve Napolitano, city commissioners, and the public works crew that did the work. 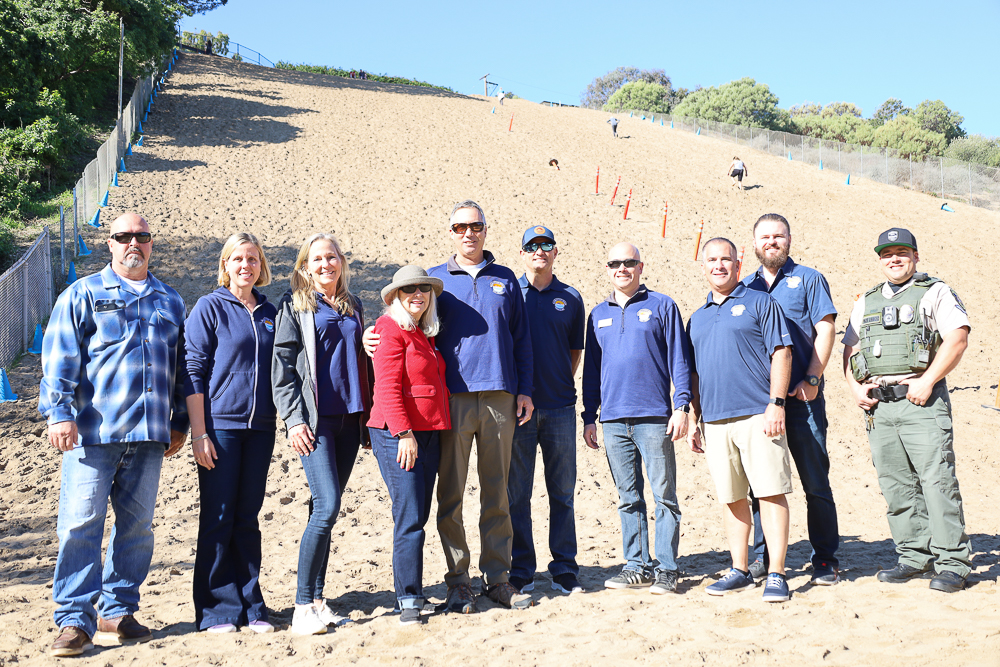 Notably absent was evidence of the bitter divide that pitted the park’s neighbors against park users between 2000 and 2010, when an average of 9,000 people a month raced up and down the 100 foot high namesake dune. The dune’s 70 degree angle is so steep, runners use their hands as well as their feet on the ascent, making the park an internationally recognized destination for high cardio, low impact workouts.

The divide over the park’s use, though not as bitter as the recent Bruce’s Beach Park controversy, raised similar issues. Residents for Sand Dune Safety (RSDS), who advocated closing the dune to workouts because of the accompanying noise, litter and traffic, were accused of racism.

Citizens for Outdoor Recreation and Exercise (CORE), who advocated unrestricted access to the dune, were accused of jeopardizing Manhattan’s small town character.

The controversy was fanned by national media outlets as diverse as ESPN, A & E, Men’s Health, and Sports Illustrated. SI named Sand Dune Park one of the nation’s Best Free Workout spots. Television’s “Blind Date” recommended the park as a good first date.

Raiders, Clippers, Lakers, USC and El Camino athletes, as well as local high school teams arrived by the busload to train at the 3 acre park on Bell Avenue, which has just four parking spots, and is surrounded by homes.

The controversy began in the late 1990s, and intensified after 2004, with the advent of Facebook and other social media platforms. After a decade of unsuccessful mitigation efforts, a resolution was reached in 2010 through the efforts of the 70 member Sand Dune Park and Neighborhood Sub Committee (SDPN), a responsive city council, and respect for the park’s history, which predated its official park designation in 1964. 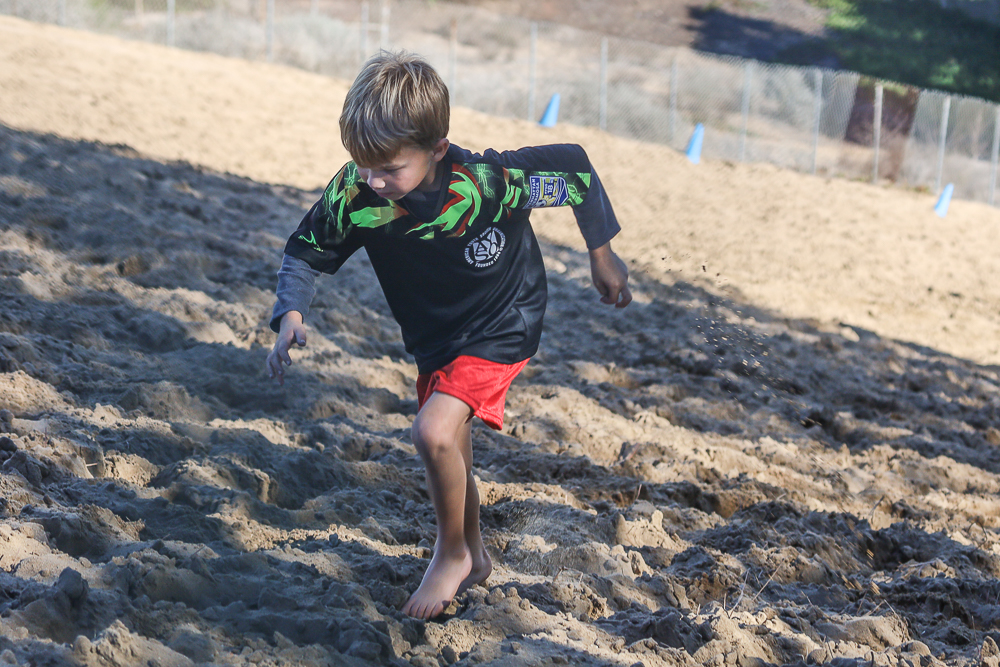 “It was just a little patch of grass and sand to enjoy, a remnant from the time when much of the South Bay landscape was sand dunes,” Manhattan Beach historian Jan Dennis said of the park in a 2010 interview with Patch.

Dennis traced the park’s history back to 1956, when residents volunteered to clear the dune, which had been used by the neighboring National Guard Armory as a dump. In 1963, the National Guard deeded the sand dune to the city.

Once again, residents volunteered to clear the dune, in preparation for the city declaring it a park in 1964.

Matt Wachtfogel and his family lived at the base of Sand Dune Park when the park opened. At the height of the park controversy in 2010, Wachtfogel reminded residents of what the park meant to the neighborhood kids in a story for Easy Reader. (The complete story can be found at Easyreadernews.com/memoir-sand-dune-park.)

“When the park officially opened for business, I was seven years old, and entering my prime ‘outside’ playing years. In those days, parents could let their young children play outside, unattended for long periods, with no concern about being thrown in jail for doing so. 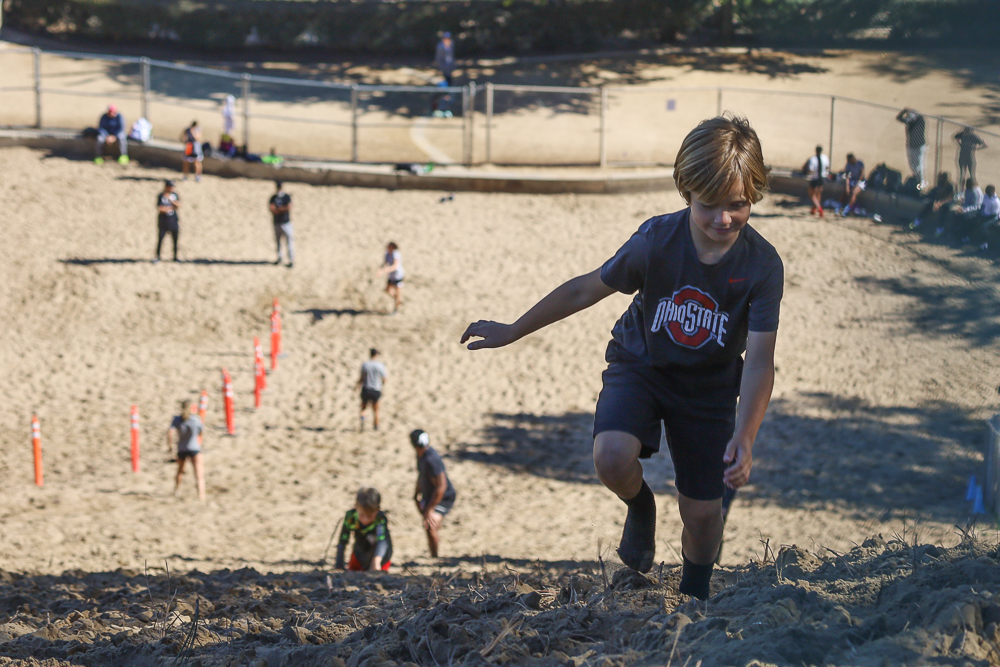 “I attended Ladera Elementary School. After school, my friends and I would stop at the park for a quick swing or a run up the sand hill, which at the time seemed monstrous. The park attendant was a nice woman who worked in the building where the bathrooms are now. She was in charge of keeping order in the park, and checking out play equipment. We would stop for an hour or two to play carroms, kick ball or just run around on the dune and act like kids.

“The sand dune was a four-season playground. At some point, we realized that after a good rain we could carve ‘ball tracks’ in the dune’s wet sand. We would build 50-foot long tracks, similar to a bobsled run, with bank turns, jumps and tunnels. One of us would sit at the top of the track and one at the bottom. We would take turns rolling small balls down the tracks.

“It was such a great feeling to cross the boundary from the school to the park, and be on a sand trail, in a little bit of wilderness. 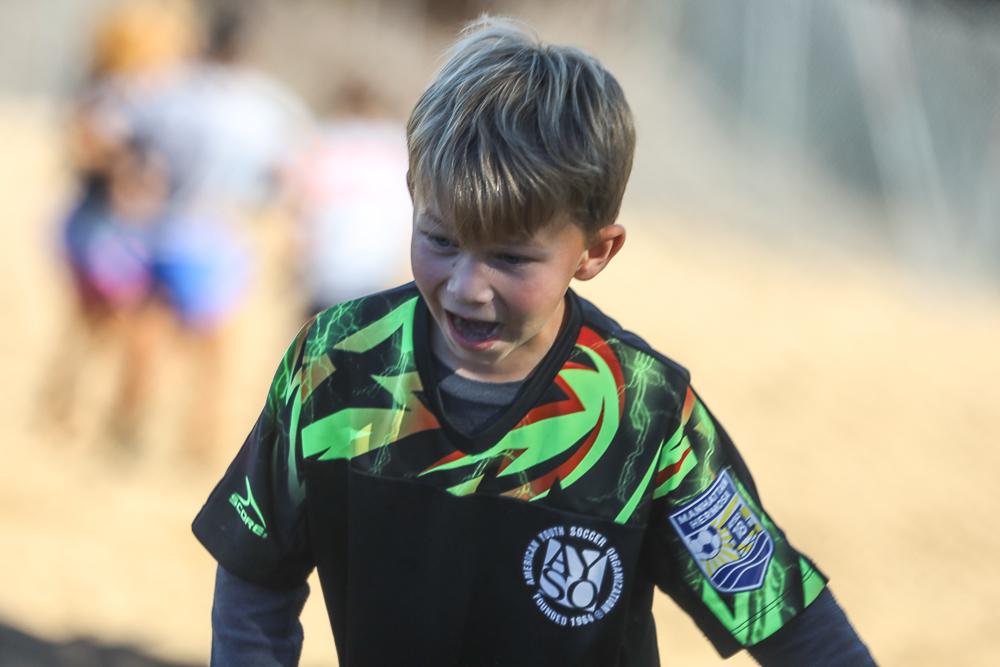 “As the park increased in popularity, the City was forced to control erosion on the planted area of the dune. Many of the sand trails were converted to railroad tie walking paths, and fences were installed to keep people on the paths. I am not sure how parents felt about the changes, but my friends and I felt like our wild park was changed forever, and not for the better. Now our hide-and-seek, and hill-wide, ball tag games were limited. We adapted, and found ways to work with the new obstacles, but at the time, the changes seemed terrible.

“The park and dune will never be the same as it has been, it can’t be. Perhaps if nothing else it can still be something great for children.” 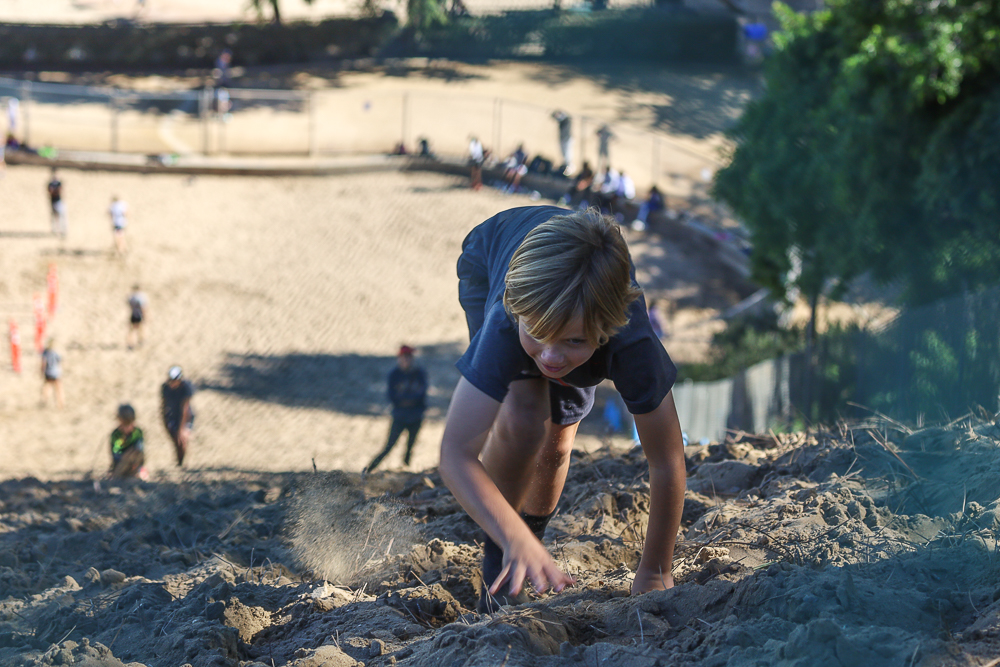 In January 2000, residents testified before the Planning Commission for four hours about noise, parking, litter and unruly crowds at the park. The commission responded by cutting back the dawn to 10 p.m. hours to 6 a.m. to 8 p.m., limiting the number of people allowed on the dune to 45, and converting the four car parking lot to handicapped, and service vehicles only.

During a subsequent January 2000 Parks and Rec meeting, Dave Peterson, a spokesperson for the Sand Dune Park Neighborhood Committee, told commissioners the problems were unabated. “We recommend the dune be closed,” he said.

“It’s not a regional park, and not an athletic facility. It is a neighborhood park,” resident Bill Franchini told the commission.

When commissioner Bill Currey suggested closing the park temporarily to break the pattern of bad behavior, the audience erupted in applause. 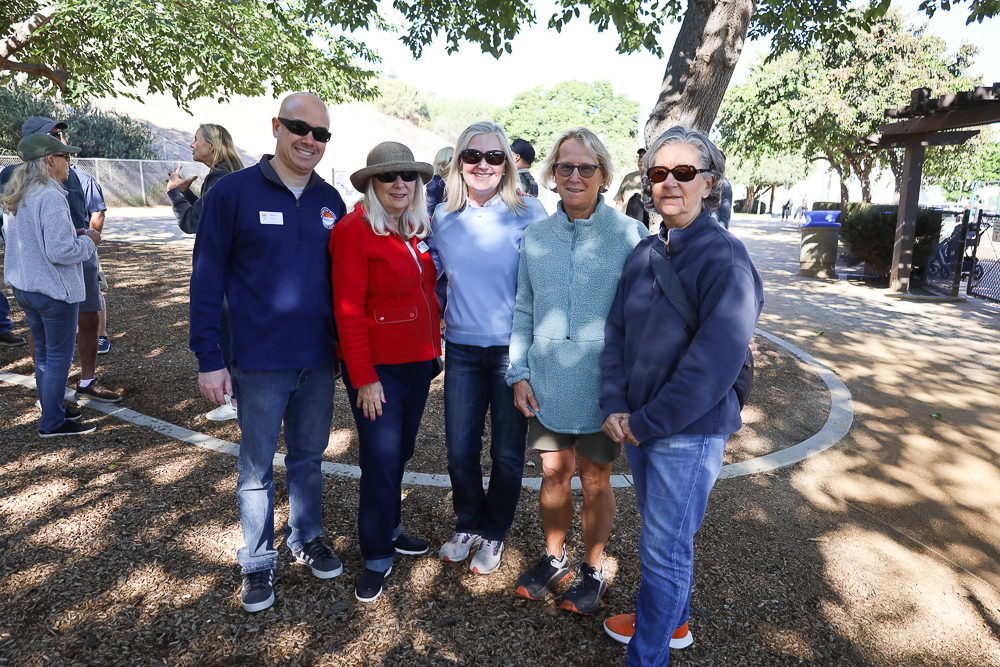 But when put to a vote, the commission voted unanimously against closure.

During a January 2002 Parks and Rec commission meeting, park neighbor Matt Niemann testified, “We keep tiptoeing around the real issue. I suspect most violators are not from Manhattan Beach. We have what’s called an attractive nuisance. I regret having the park at all.

“I was accosted at 6:15 a.m. by a guy who wanted to fight. My children have been threatened by adults and other children.”

“The problem isn’t the use of the park at 6 a.m. It’s the bullhorns, and the whistles and the cheering at 6 a.m.,” neighbor Mariann Fragner said.

In June 2002, following three hours of public testimony about the park, the city council agreed to erect a temporary fence around the park.

A ripple of backlash ensued.

Peggy Curry, an educator with four children, asked, “What a fence says is ‘We don’t want your kind.’ Maybe it’s not racist, but it feels racist. Make the park look friendly, and people will be friendly.”

Resident Mark Neumann paraphrased Martin Luther King when he addressed the city council: “I have a dream that one day on the sand dunes of Manhattan Beach, the sons of land owners and sons of neighboring towns will be able to sit down together at a table of brotherhood.”

Two summers later, in June 2004, after having temporarily closed the park in response to the ongoing complaints, the council proposed permanent fencing for the park.

Carl Avery sang the opening lyric of Joni Mitchell’s “Big Yellow Taxi’  to the council: “They paved paradise, and put up a parking lot.”

The council shelved the fence idea in favor of stricter parking and noise enforcement.

In late 2009, in another attempt to break the bad behavior pattern, the council closed the park “indefinitely.”

During a January 2010 council meeting, the council agreed to reopen the park, but only after directing staff to landscape the dune with switchbacks.

“We here in the City of Manhattan Beach are saying that we refuse to let Los Angeles utilize this small piece of land here in our city as a workout facility,” Mayor Mitch Ward, who is Black, told a packed council chambers. “I  want to see two or three people walking up at a time, enjoying a beautiful nature preserve.”

CORE supporters responded with a protest march from The Strand to the park, carrying signs that read. “Free the Dune,” and “Don’t Kill the Hill.

“We cannot sit idly by and let peaceful exercise become a crime in our parks,” CORE president Bill Hory said.

During a joint meeting of the Parks and Rec, and Public Improvements commissions that year, the question of reopening the park was put to a vote.

“As much as I would like to support keeping the dune open, it’s unachievable based on our historical inability to enforce much simpler regulations on the dune,” Parks and Rec commissioner Gerry O’Connor said.

“The park is part of the character of our city. I think we need to preserve that character,” Gross said.

In September 2010, after the park had been closed for nearly a year, the council again adjusted course. It instituted a reservation system, limited dune usage to 20 people at a time, and limited its use on Sundays to children under 12.

CORE complained the rules were too restrictive.

But on Monday, August 2, the day the park reopened, CORE president Bill Hory was the first person in line. He handed the admission ticket he had printed at home to an attendant, and was handed back a copy of “Sand Dune Park Rules and Regulations.”

A bank of television crews filmed running Hory and fellow CORE residents running up the dune for the first time in nearly a year.

RSDS were disappointed that running up the dune wasn’t prohibited. But their mass city council protests ended as the problems, though not resolved, became tolerable.

The balance arrived at after a decade of experimentation, has now kept peace in the neighborhood for over a decade with only minor adjustments, according to Parks and Rec director Mark Lehman, who has been with the city for two decades.

“There’s a certain wildness to the park that shouldn’t be tamed, but there are also a number of maintenance issues that were exacerbated by COVID that need to be addressed,” he said. 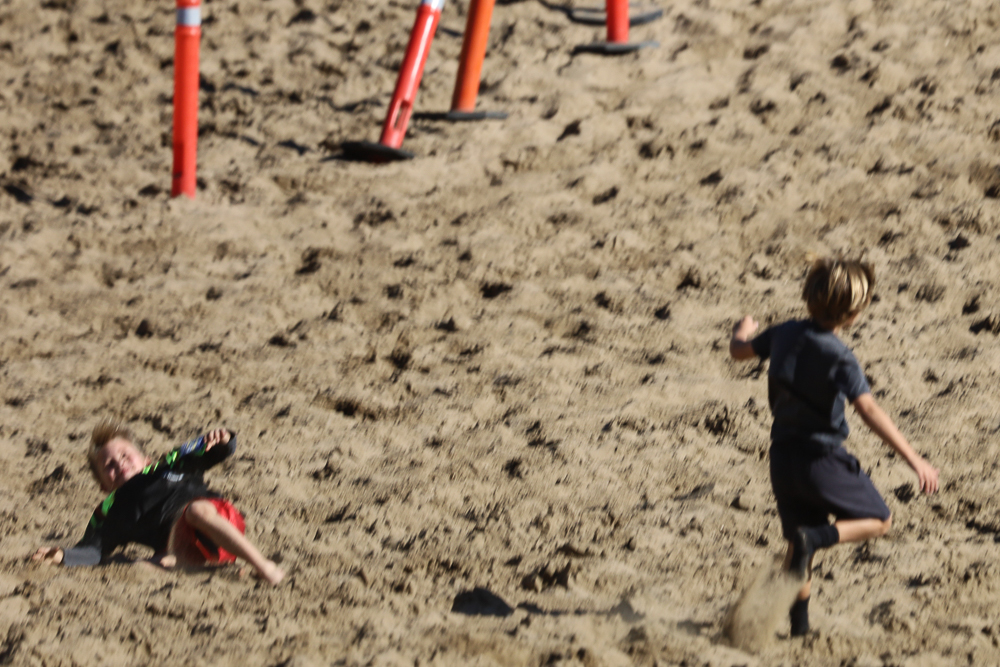 Ridge Sedberry rolls down the dune, while Dane Kotzman chooses to stay on his feet.

Glimpses of that wildness, and the secret park Watchtfogel remembered from his childhood, could be seen Saturday morning in the play of American Martyrs School seven year old best friends Ridge Sedberry, Dane Kotzman.

The two boys ran and clawed their way from the base of the dune to its summit, blowing past gasping adults, and a girls high school basketball team.

Then they began their descent, at full sprint. Kotzman made it to the bottom, still on his feet. Sedberry stumbled half way down, and tumbled the rest of the way to the bottom.

“I’ll be digging sand out of his ears and hair for a week,” his mother Aubrey said.

The Sand Dune Park survey about improvements to the park is on line at ManhattanBeach.Gov/survey. ER