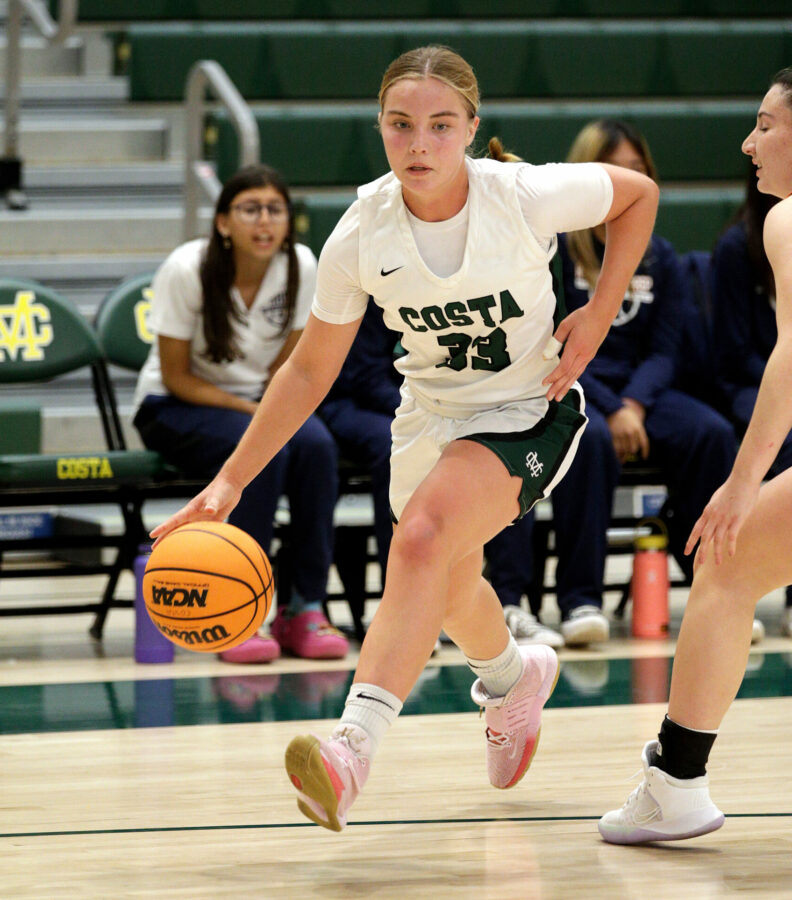 Junior forward Ju Ju O’Brien has emerged as a defensive and offensive star this season. Photos by Ray Vidal

Maile Nakaji’s reputation as a great basketball player at Manhattan Beach Middle School preceded her arrival at Mira Costa High School. The clever ball handler, dead-eye shooter, and great rebounder for her size, showed all the tools while still in 8th grade.

“We knew all about her,” Costa Coach Jeff Herdman said. “That’s how good she was in middle school.”

So it was no surprise to anyone that from the day she showed up for Mira Costa basketball tryouts four years ago, Nakaji proved that she was the best player on the team – with no resentment from the upperclassmen.

“She’s such a great person that everyone just accepted her as the best player immediately,” Herdman said. “She never had an attitude – just practice hard and play hard.”

Four years later, she is one of the best players in Southern California.

“She’s been our leader for four years,” Herdman said. “She’s a great, great player who leads by example.”

She proved it once again last Wednesday night, as she connected on an incredible six three-pointers in the first half alone of a 61-48 Mustang victory over Rolling Hills Prep in the Pacific Shores Tournament held on the Costa campus. 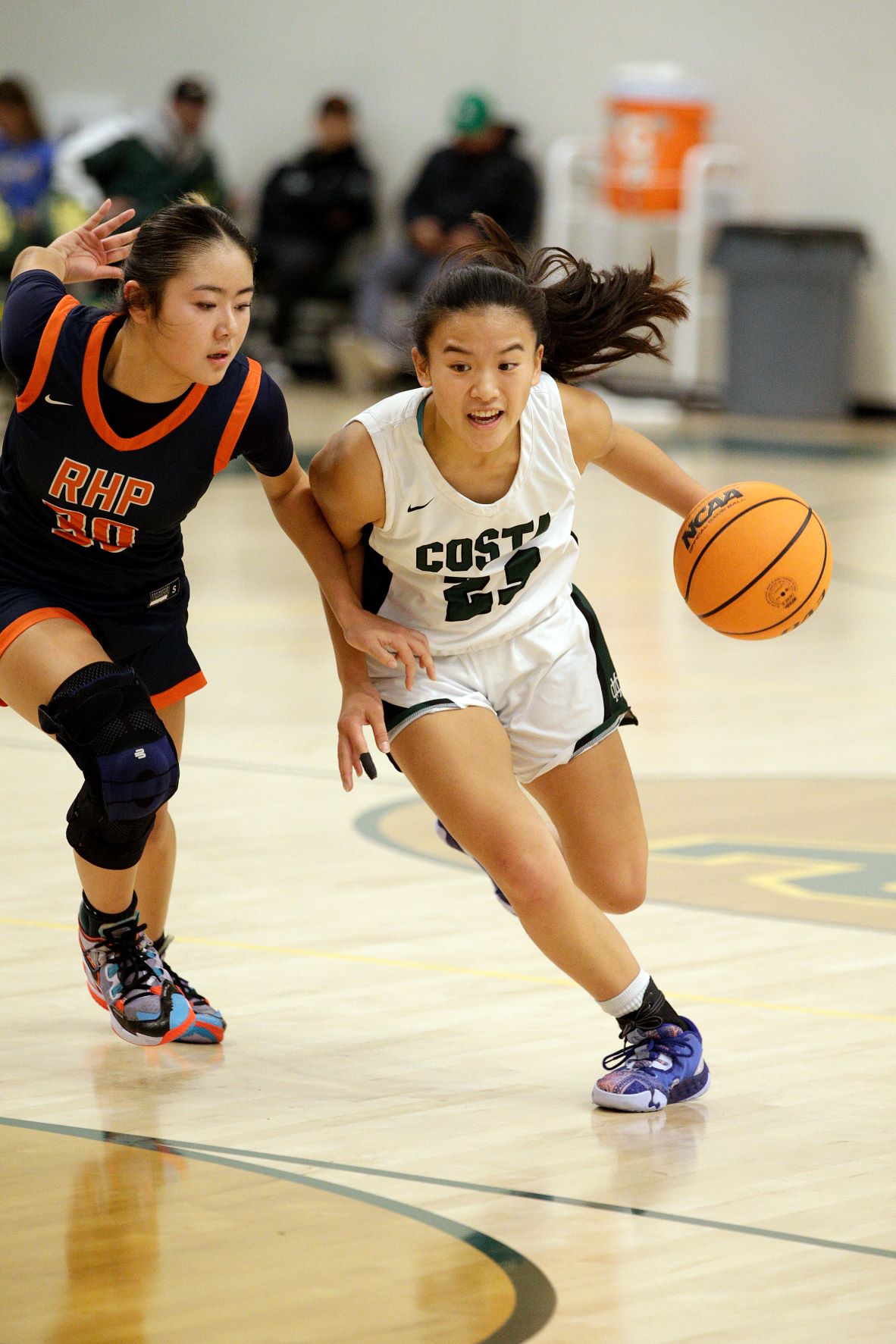 Mira Costa’s Maile Nakaji scored 90 points, pulled down 28 rebounds and had 35 assists during her four games at the Pacific Shores Tournament.

Although Mira Costa ended up in third place for the tournament – thanks mainly to a bizarre series of mistakes by an incompetent referee in their two-point semi-final loss to Crenshaw — the 5-foot-5 Nakaji ended up with breathtaking totals from her four tournament games:  90 points, 28 rebounds and 35 assists.

Although she was outstanding in all four tournament games, Nakaji was personally responsible for taking down Rolling Hills Prep, whose coach could be heard in the team’s timeout huddles loudly pleading with her players to stick with Nakaji, and not let her get loose to shoot from anywhere on the court – especially outside the three-point line.

It began, however, it was a back-and-forth game.

Rolling Hills scored first on a nifty layup, but Nakaji immediately answered with a three pointer from the right corner to give the Mustangs a 3-2 lead they never lost.

Junior guard Hayden Lin – who helped the Costa girls volleyball team get to the CIF Finals last month, but is now ready to play hoops full time – knifed in for a layup that pushed the lead to 5-2.

RHP hit a three of its own to tie it at 5-5, but Costa’s senior center India Pines connected on a stick-back to grab the lead back at 7-5.

Nakaji hit two consecutive 3-pointers to boost the lead to 16-7, but she was far from done.

After Junior forward Ju Ju O’Brien hit a 10-foot pullup jumper, Nakaji drilled yet another 3-pointer and Lin drained a trifecta of her own to beat the first quarter buzzer and give the Mustangs a 24-9 lead.

Early in the second quarter Nakaji again hit consecutive 3-pointers for a 31-14 lead and you could just feel the air go out of RHP’s hopes of winning this game.

Lin finished off the great first half by powering down the lane to sink a floater just before the buzzer, and give the Mustangs a 41-26 lead. They cruised through the second half of the 61-48 win while Nakaji finished with 21 points, followed by Lin with 11 and O’Brien with 10.

In the process they set themselves up nicely for a showdown with Crenshaw in the semi-finals.

Late in that semi-final game they had a 12-point lead at 46-34 and looked set to make the Pac Shores Finals. But that’s when things started to go sideways, thanks to one incompetent referee.

It started when the ref called five seconds on Costa for not advancing the ball quickly enough, under  the so-called “closely guarded” rule.

Herdman was confused about the call because he knew there is no such rule in girls high school basketball.

The ball was given to Crenshaw, which immediately came down and hit a three-pointer to cut the lead down to 9. As Costa advanced the ball, the same ref made the very same call again.

This time Herdman, who usually keeps a calm courtside demeanor, protested loudly that there was no such rule, but to no avail. The ref simply ignored him and gave the ball back to Crenshaw, who immediately hit another three pointer to cut the lead to six.

As Costa tried to advance the ball one more time, the same ref made the exact same call yet again. This time Herdman, realizing that he was talking to a brick wall, looked around for help and noticed that a referee waiting to work the next game was standing nearby. So he appealed to him, who agreed that Herdman was right: the obscure 5-second rule was not in effect for high school girls basketball.

But by the time Herdman could convince that ref to go out on the floor and talk to his colleague who kept making the wrong call, Crenshaw had hit a 2-point shot to cut the Costa lead to 4 points.

“At that point we were extremely frustrated and upset,” Herdman said. “Players and coaches alike.”

And now Crenshaw, gifted with all the momentum thanks to the mis-informed and/or incompetent ref, was in the midst of a 14-0 run to end the game. They completed their comeback with a two-point shot with five seconds left.

That was just enough time for Nakaji to get up a runner along the baseline that rimmed in and out at the buzzer – proving she is indeed human — as Crenshaw pulled out the 48-46 win.

“We were extremely upset,” Herdman said. “In shock at what had happened, actually.”

After the game the mistaken ref apologized, but by then it was a case of too little, too late.

Costa was able to shake off their frustration and regroup to beat Bishop Montgomery 55-45 in the third-place game. “That was particularly satisfying because Bishop had beaten us earlier in the season,” Herdman said.

In the third-place game Nakaji had 23 points while Ju Ju O’Brien, a terrific defender who has emerged as the team’s second star, totaled 18 points.

While the team is off to a 7-3 start with Bay League games starting this week, much of the focus will remain on Nakaji, who, barring injury, will pass the 1,000-point milestone for her career sometime in the next few games. In the modern era of Mustang basketball, only the great Allie Navarrete racked up more points – in her case, more than 1,500 points.

“She’s being recruited, so she’ll be playing college ball next year,” Herdman said. “I’m going to enjoy Maile while we have her.”

It’s not quite as catchy, or inspiring as the Whose House? Rams House! call and response was during last season’s run to a Super Bowl championship.

But it finally gave the Rams and their fans something to cheer about this week.

The Rams signed former number one overall draft pick Baker Mayfield off the waiver wire on Tuesday, put him through practice on Wednesday, and watched him lead a miracle comeback Thursday night in a 17-16 win over the Las Vegas Raiders.

The victory, which broke a six-game losing streak that had knocked the Rams out of playoff contention with a 4-9 record, didn’t just bode well for the Rams short-term future.

But it did bode well for their long-term future. Mayfield is only 27 and still possesses the passing skills and exceptional mobility that made him the top pick in the 2018 draft.

The reality – although no one associated with the Rams wants to admit it – is that Mayfield could easily displace Matthew Stafford as the starting QB next season.

Even though Stafford signed a huge extension in the off season following the Rams Super Bowl victory, that now seems like a hazy dream that happened long ago and far away.

Stafford was declared done for the season three games ago, thanks to a series of neck, back, arm and leg injuries. But the veteran quarterback, who will turn 35 on February 7, was already looking like a guy who was done for good as a starter in the NFL.

A handy guy to have as an overpaid backup? Sure.

But a week-in, week-out starter next season and beyond?

Keep dreaming. He’s simply absorbed too much punishment in his 14 years in the NFL to ever grind his way through a full season again.

And that’s where Mayfield comes in. Rams Coach Sean McVay has already said that Mayfield will be the starter in the Rams last four games this season.

How the team does in those games really won’t matter, since they have no shot at making the playoffs, and have already traded away their first-round pick in next spring’s draft.

But how Mayfield performs will matter a lot. McVay has long been known as a guy who can bring out the best in any quarterback. He’s an offensive genius who knows just how to fine-tune a quarterback’s skills, teach him the nuances of his offense, and instill enough confidence to bring out whatever greatness resides within that player.

And we know Mayfield was great in college at Oklahoma, where his coach was none other than USC Coach Lincoln Riley.

He was available for the Rams to sign off waivers only through a series of fortunate events. First, after a great rookie year with the Cleveland Browns, Mayfield gradually declined as the chaos around him took its toll.

Then this past summer the Browns rolled the dice by trading for disgraced quarterback DeShaun Watson and then signing him to a $230 million contract. Watson, one of the best young quarterbacks in the league for the Houston Texans, was suspended by the league for 11 games after 22 women accused him of sexual misconduct.

There was no way the Browns were going to keep paying Mayfield after signing Watson to one of the largest contracts in league history, so they traded him to the Carolina Panthers, another one of the most dysfunctional franchises in the entire league.

That was a marriage made in hell, so the Panthers finally cut Mayfield loose last week, and he ended up in LA for what amounts to a five-week audition.

So let’s see what magic McVay can work with Mayfield over the next month.

It’s their one and only chance to return to the kind of magic Rams fans got used to seeing at SoFi Stadium last season.

There’s not much left to say after USC quarterback Caleb Williams was named the Heisman Trophy winner Saturday night, and cried his way through an emotional acceptance speech, thanking everyone from his youth coaches to his parents to the USC marching band.

All Ball first mentioned the possibility of something like this happening after 2004 Heisman Trophy winner Matt Leinert mentioned to us at Live Oak Park that Williams had that kind of world-class ability.

Then for the last month All Ball joined the chorus of LA voices pointing out that Williams was more responsible for USC’s remarkable turnaround than anyone else, including Coach Lincoln Riley.

So there’s not much left to say, except this: Look for Williams to win it again next year, and for USC to win the national championship it would have won this year if Williams hadn’t torn his hamstring in the PAC-12 championship game.