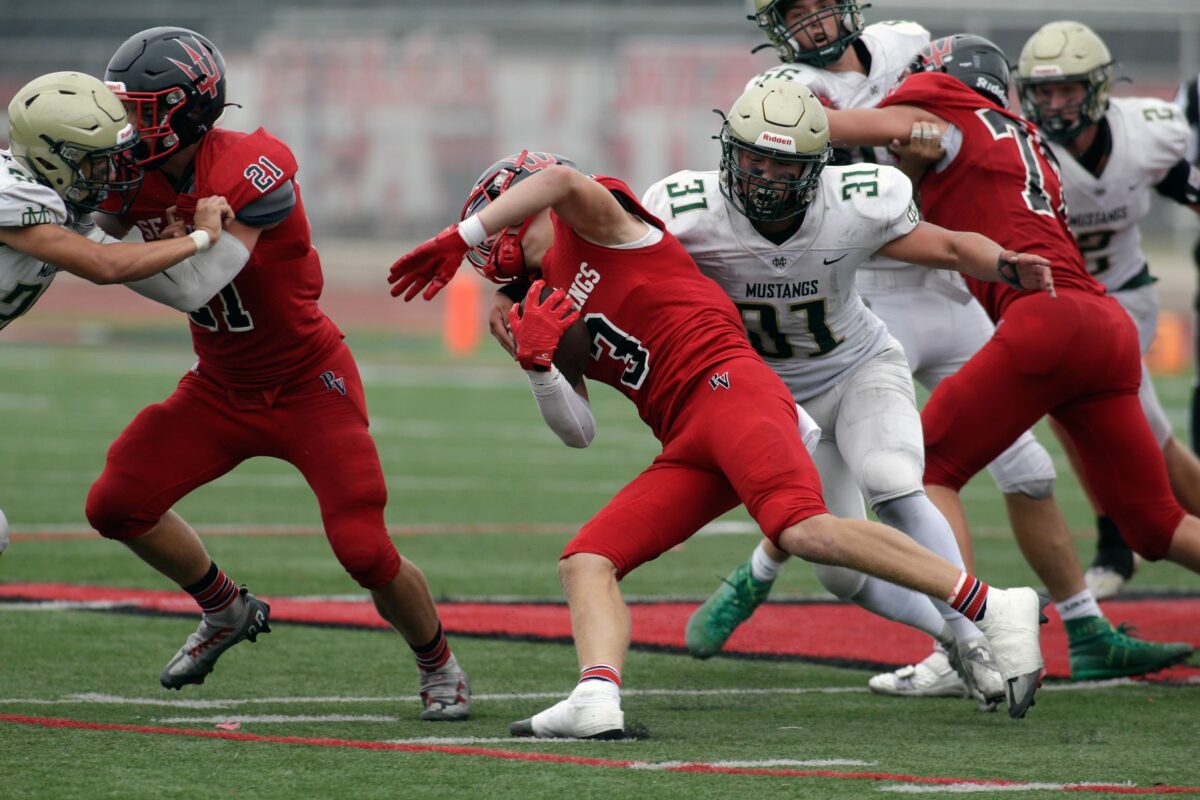 Mustang’s Jacob Goldberg  slips past Sea Kings blockers to stop play. But the Mustangs couldn’t stop the Sea Kings from running up a 40 to 10 score.  Photo by Ray Vidal.

It starts Tuesday night when the Dodgers host the San Diego Padres in game one of the League Divisional Series, also known as the Pacific Coast Series.

Las Vegas oddsmakers say the Dodgers are the odds-on favorites to win the World Series this year – a designation that is usually the kiss of death.

But there’s plenty of good reasons for the bookies to make the Dodgers heavy favorites.

How amazing were the Dodgers this year? Let us count the ways.

First, at 111-51 they had the fourth best record in all of major league baseball history. That’s a lot of teams over a lot of years.

Second, they set a franchise record with 111 wins. Statistically, at least, that means this Dodgers team of Clayton and Mookie and Justin is better than the boys of summer team – Jackie Robinson, Duke Snider, Roy Campanella, Gil Hodges and Pee Wee Reese — who ruled the National League in the late 1940s and early ‘50s and finally won a World Series in 1955 before splitting for the left coast just three years later.

Better than the early 1960s Dodgers teams of Sandy Koufax and Don Drysdale and the very recently departed Maury Wills – the best base thief in baseball history — and the Davis brothers, Tommy and Willie.

Better than the 1970s Dodgers teams of Steve Garvey and Ron “The Penguin” Cey and Bill Russell. Better even than the Dodgers ’88 World Series Champions of Tommy Lasorda and Kirk Gibson and Orel Hershiser, of that immortal pitcher-catcher battery of Mike Scioscia and Fernando Valenzuela.

Anything less than that will be considered a miserable failure, and fans will spend the winter casting blame on everyone from Manager Dave Roberts to phenom-turned-bust Cody Bellinger, to President of Baseball Operations Andrew Friedman, the former whiz kid turned corporate exec.

Because Dave Roberts guaranteed before the season that they would win the World Series?

Sure, that’s part of it.

But the bigger part is that this is their 10th straight season making the playoffs, the ninth time in 10 years that the Dodgers won the National League West. And what do they have to show for that decade of success?

One crummy little World Series title played after the 60-game pandemic-shortened season, a World Series won without a single game being played in Dodgers Stadium because every game was played in a sterilized ball park in Texas.

In other words, during that decade of dominance they won the World Series in the one year no one gave a crap about it because they were so busy trying to stay alive.

Oh sure, it will stay in the record books, and as time goes by some people will forget about the pandemic and its dampening and diminishing effect on all sports, not just on baseball.

But there really should be a great big asterisk next to the 2020 World Series title to indicate that it simply doesn’t carry the same emotional weight, the same rich resonance for true-blue Dodgers fans that the 1988 title does, or even the 1955 Brooklyn World Series title, which finally ended the Yankees’ postseason dominance of the Dodgers.

So this year, more than any other year in the last decade of winning in the regular season, but losing in the postseason, the Dodgers really are facing a put-up or shut-up situation.

Now show us something different.

Please show us something different.

The Bruins played by far their best game of the season – sorry, make that of the last five years — Saturday afternoon in crushing 11th ranked Utah 42-32. The win moved them to 6-0 on the season and kept them tied with USC atop the PAC-12.

One play in particular stood out, a play that energized the Rose Bowl crowd – by far the largest UCLA crowd in years – more than anything in recent memory.

Utah, the pre-season favorite to win the PAC-12, had just scored early in the fourth quarter to pull within 28-24, with plenty of time left to overtake the Bruins. You could just feel the crowd resigning itself to another episode of Chip Kelly’s Blues, where the Bruins flirt with greatness but fall back into mediocrity, as they have done so many times since Kelley and DTR both arrived at Westwood five years ago.

Not on this day.

And, it now seems safe to say, not this year.

This time DTR rolled right, escaped would-be tacklers, and threw a bullet to Logan Loya, who caught it in full stride and kept right on going 70 yards into the end zone.

DTR went crazy, jumping and skipping and dancing in the end zone as if to say he had made it to the promised land and there’s no going back now.

The win over Utah was particularly impressive because the Utes had won five consecutive games over UCLA. The win will maybe, finally, earn Kelly some credibility with a Bruins fan base that has been agitating for his firing for the last three years.

And while there are plenty of tests waiting for the Bruins – starting with their game at Oregon on October 22, after a bye week to rest and recover from consecutive wins over highly ranked Washington and Utah – it’s perfectly reasonable to project that they could end up undefeated going into the annual backyard brawl with an undefeated USC team at the Coliseum on November 19.

Imagine that: undefeated UCLA taking on undefeated USC in the Trojans house. There are no guarantees, but right now it looks very possible.

Let us pray it happens, if only to take our minds off the Rams on-going collapse after Sunday’s 22-10 loss to the Dallas Cowboys.

USC certainly did its part to keep the dream of an undefeated showdown alive with a workmanlike 30-14 demolition of Washington. The Cougars are very physical, well coached and have a great quarterback in Cam Rising, But Coach Lincoln Riley and his posse of transfer portal stars rolled right over them after falling behind 14-10 early in the second quarter.

Quarterback Caleb Williams, the transfer from Oklahoma, was good but not great. No, the real story Saturday night at the Coliseum was the performance put on by Oregon transfer Travis Dye, who ran the ball 28 times for 149 yards and a second quarter touchdown that got the Trojans the lead back for good.

Just to show how arbitrary the national rankings can be, USC fell from 6th to 7th when the new rankings were released Sunday night, apparently because they didn’t destroy Washington by as much as they should have.

UCLA, meanwhile, moved up from 18th to 11th with a bullet. 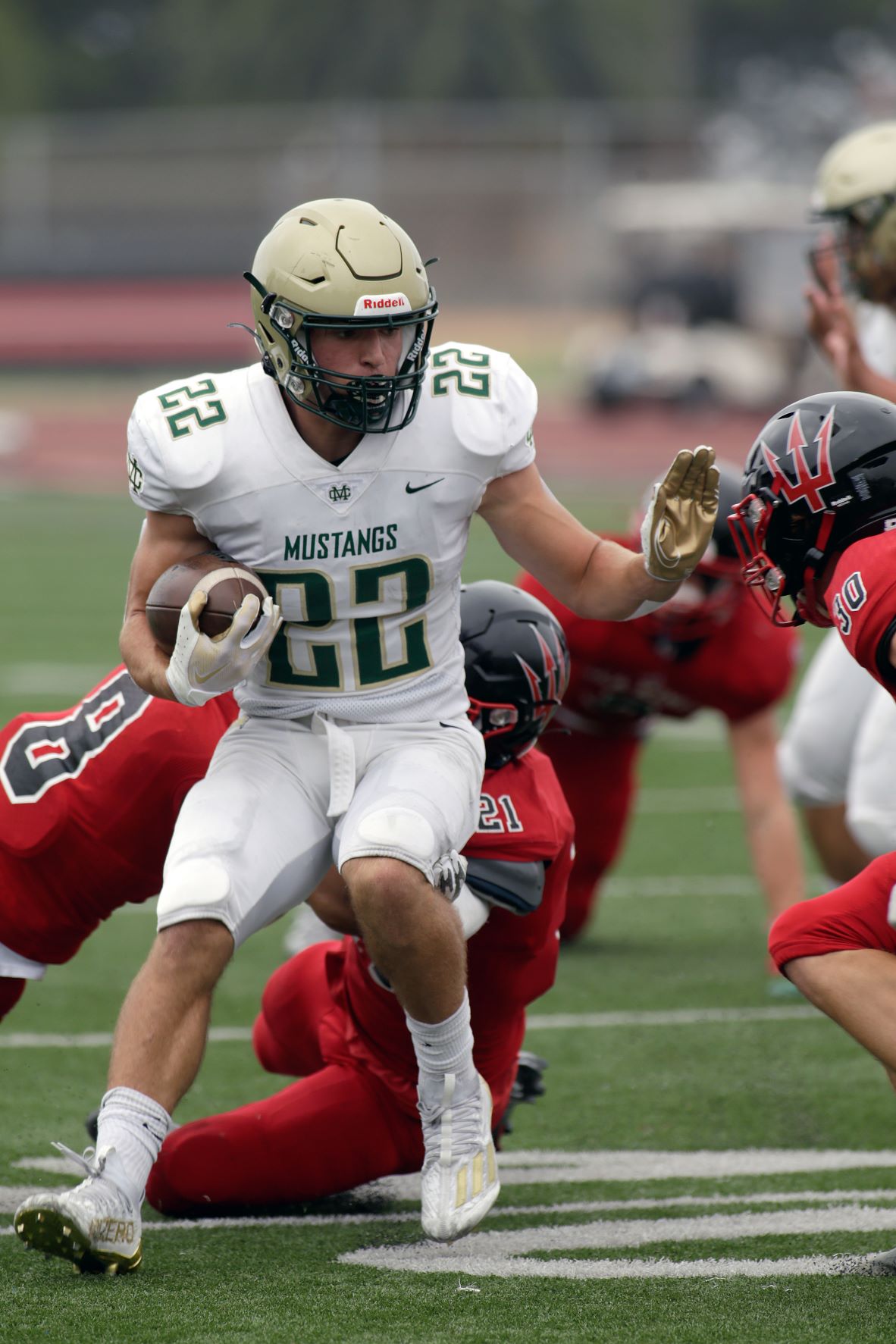 The beach city dream of a regular season finale pitting an undefeated Mira Costa football team against an undefeated Redondo team with the Bay League title at stake is dead.

It died a not-so-quick and not-so-painless death Friday afternoon and into Friday evening.

It started Friday afternoon when the Mustangs traveled up the hill to Palos Verdes for a rare 3 p.m. game and got stomped by a hard-to-believe score of 40-10. Hard to believe because Costa’s calling card so far this season has been its prolific offense, featuring star running back Matthew Kraskousas, ever-improving sophomore quarterback Nico De La Cruz and unstoppable wide receivers Cole Crotty and Reese Leonard.

Mira Costa came into the game with a 5-1 record, its only loss a non-league 52-48 shootout to St. Francis in the season opener. Since then, they had been unbeatable, including their opening Bay League game over Culver City last week.

But despite all that success, they knew that a PV team that had beaten them five consecutive times in recent years was lurking, just waiting to give them a major test in early October.

On this day it was Sea Kings junior Michael Beresford who led the PV rout. He had a touchdown on special teams and another on defense as PV upped its record to 4-3 and 2-0 in the Bay League. Mira Costa fell to 5-2, 1-1 in league. 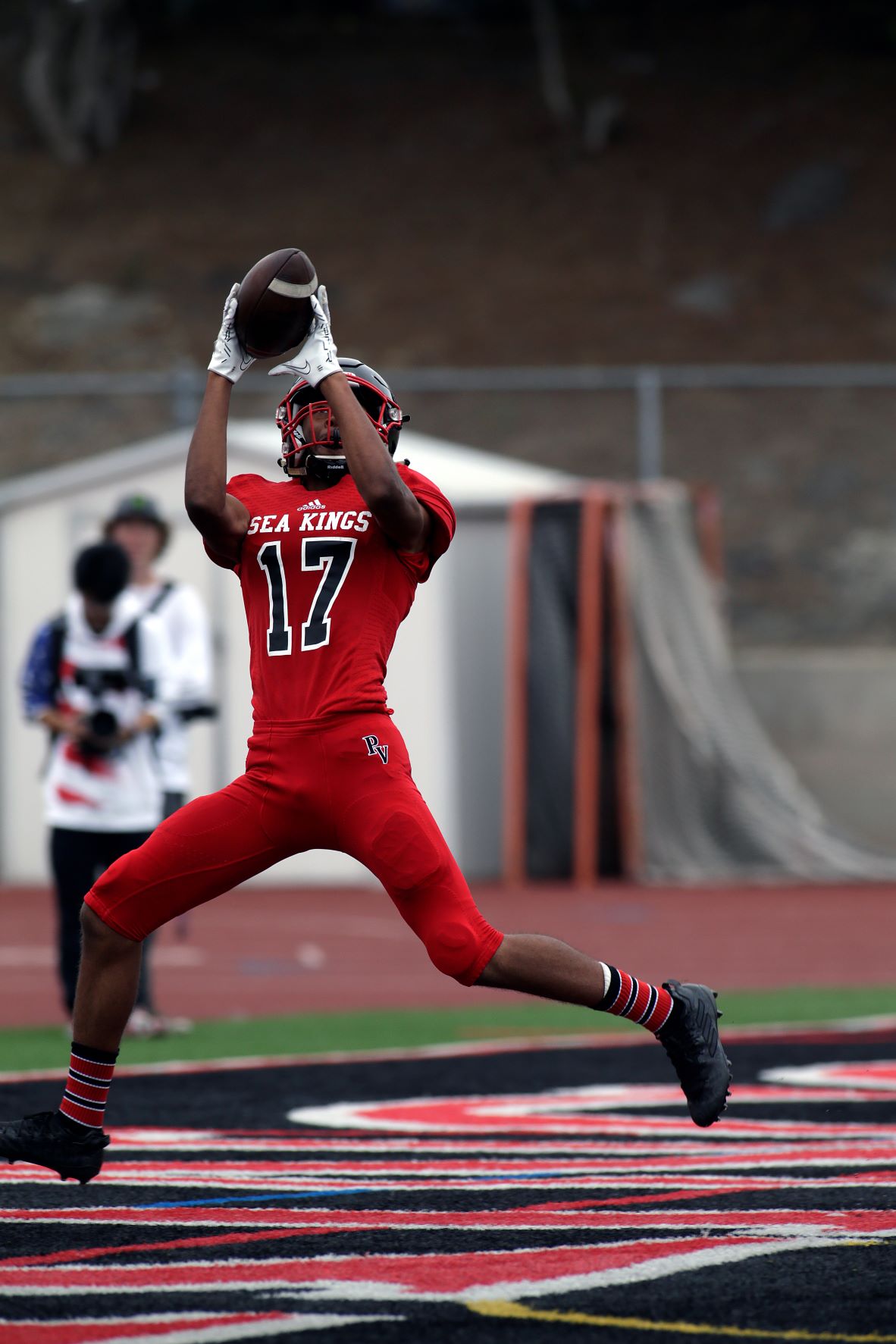 The Sea Kings Devin Jones hauls in a pass from Charlie Beuerlein for a 32 yard touchdown.

Beresford changed the game early in the second quarter. After the Mustangs tied the score 7-7, he took the ensuing kick return 85 yards for a touchdown. Palos Verdes led 13-7 at the 11:39 mark after the missed extra-point attempt.

Palos Verdes forced a fumble on the first play of the next Mira Costa series. Five plays later, Sea Kings quarterback Charlie Beuerlein found receiver Luke Gayton for an 8-yard touchdown to pump the lead up to 13.

The Sea Kings outscored the Mustangs 20-3 in the second quarter, including Beuerlein’s 32-yard touchdown pass to receiver Devin Jones with 54 seconds left. The Sea Kings went into halftime with a 27-10 lead.

Beuerlein finished with three touchdown passes, including a pair to Gayton. Gayton’s second touchdown reception, a 27-yarder before the end of the third, gave the Sea Kings a 34-10 advantage and effectively ended the game.

Beuerlein was an efficient 9 of 11 for 171 yards. Running back Conner McDonald added 77 yards rushing and a touchdown.

Beresford finished off the blowout with an exclamation point. With 9:20 to play, the cornerback intercepted De La Cruz and returned it 95 yards for a touchdown.

Mira Costa will try to get back on track Friday night, when it hosts Santa Monica.

A few miles to the northeast, in Culver City, Redondo was doing its part to kill the Oct. 28 dream finale with an even worse performance than the Mustangs put on against PV

Coming into the game, Redondo was undefeated at 6-0 while Culver City had only two wins all season.

But Culver City scored on two of its first three drives, setting the stage for a shocking   28-0 victory. Culver City improved to 3-4 overall, and 1-1 in league play.

The game was effectively over before the Sea Hawks could get their bearings.

Utilizing an up-tempo offense, Culver City got on the scoreboard 90 seconds into the game on Myles Singleton’s 15-yard touchdown run.

Meanwhile the Sea Hawks gained a grand total of 13 yards and two first downs in the half, while being forced to punt five times.

Redondo (6-1, 1-1) came out of the half looking to end the shutout. The Sea Hawks took the opening drive down to the Culver City 6-yard-line before turning the ball over on downs. After that it was all Culver City. 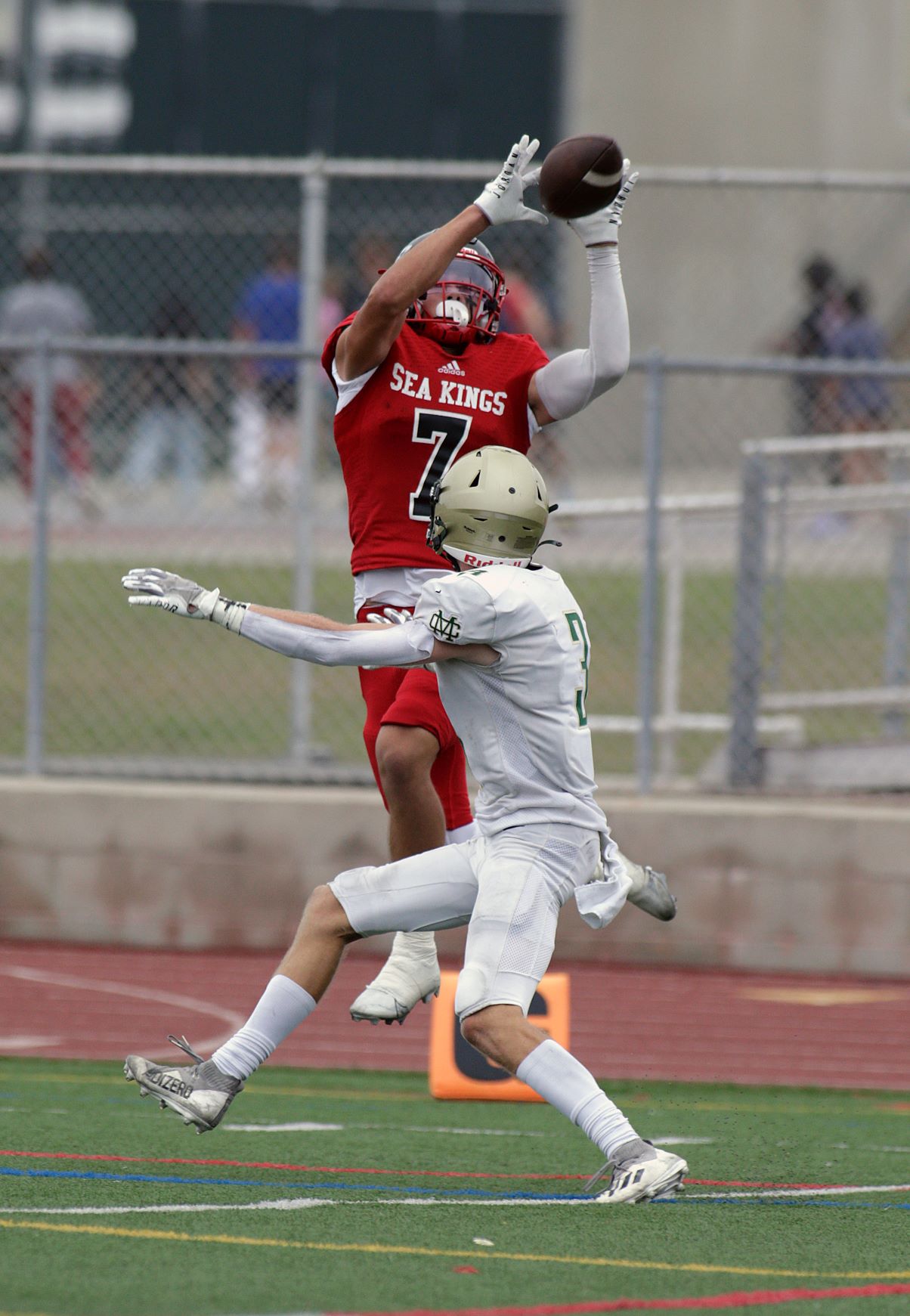