American Martyrs parish in Manhattan Beach pushes past the pandemic 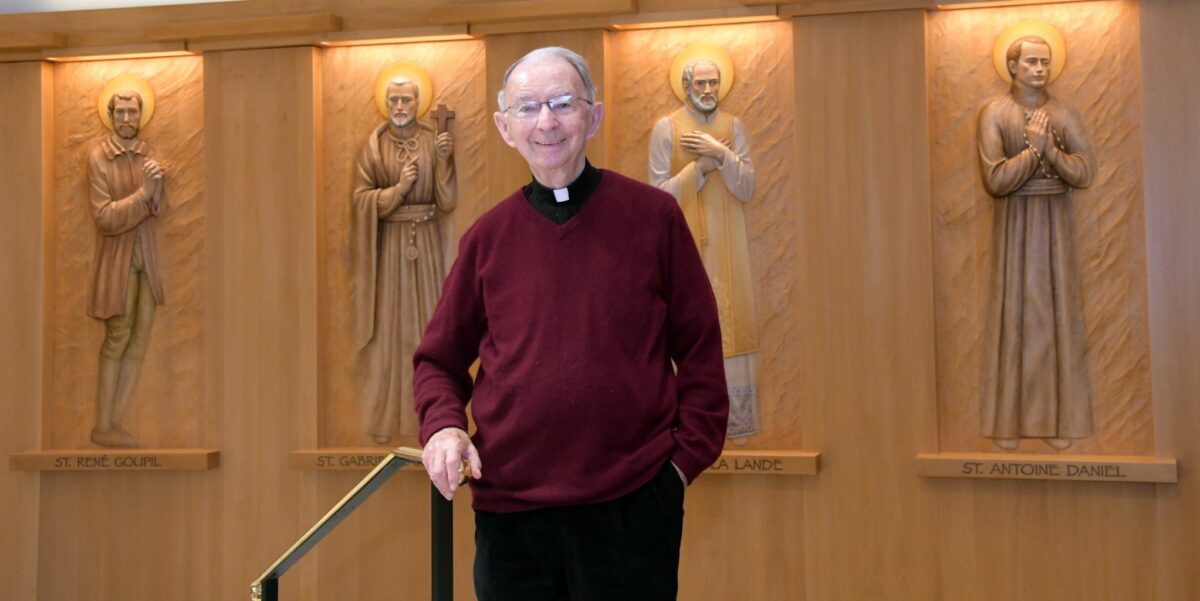 After being separated for 18 months by the pandemic, American Martyrs parishioners returned to in-person Sunday Mass in the fall to find their church had taken a proud, unflinching look at its history, and a bold step into its future.

The history was represented by new, wood carvings of the church’s eight namesake martyrs, behind the altar.

The future was represented by jumbo video screens on either side of the altar, in bright contrast to the dim, stained glass windows that line the nave. The stained glass illustrates the stories of popular saints. The jumbo screens tell the story of the Mass as it is celebrated, in moving images and scrolling text. 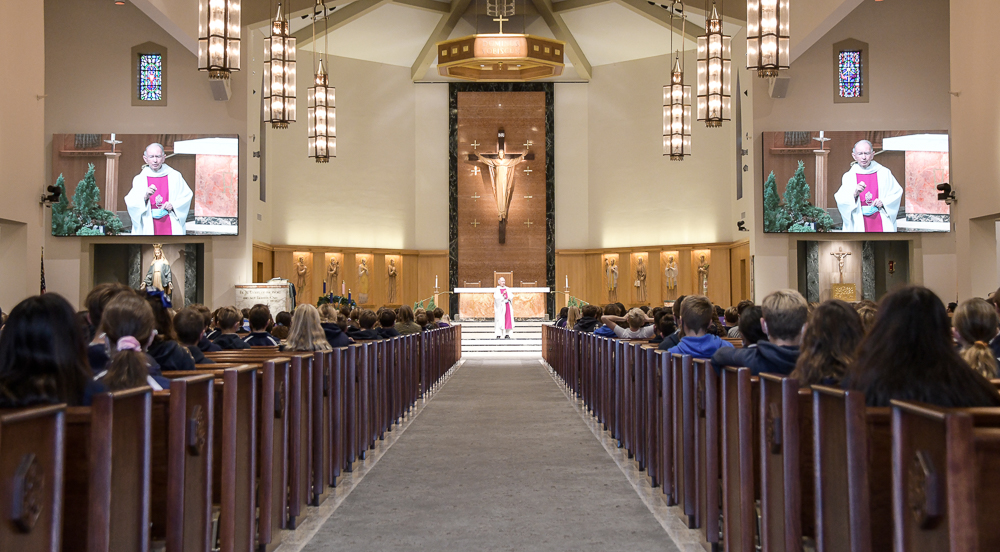 Jumbo video screens on either side of the altar screen both images and texts of the Mass. Photo by Bob Vidta/American Martyrs

The lifesize carvings, and jumbo screens were the most notable of the long planned renovations, which included new plumbing and wiring. American Martyrs Church was dedicated in 1957. Other enhancements included a prayer path with the Stations of the Cross on the side and pavers stamped with the Mysteries of the Rosary, and a meditation garden with a memorial wall dedicated to parishioners lost to the pandemic.

The pandemic’s toll on the wealthy parish was not as great as on poorer faith-based communities. But it was no less life changing.

Three parishioners were stricken by COVID in March 2020, before the virus was known to have reached the U.S. Two died. The third, Monsignor John Barry, thought he had a bad case of the seasonal flu.

When his condition became life threatening the octogenarian was taken by ambulance to UCLA Medical Center.

“I remember looking out the ambulance window. The freeway was dark because there were no cars. It was like riding through a long tunnel,” he said.

By the time Monsignor Barry was released from the hospital, in-person Masses were banned and schools closed.

Barry’s presumed immunity enabled him to resume ministering to people in their homes. Though he would have returned to home ministry, regardless.

“I’m a priest. I don’t back away from where I’m needed. My only restrictions were when doors were closed in front of me,” he said.

The few weddings and frequent funerals he officiated were held on the church plaza, and limited to immediate family.

Barry doesn’t know how many parish funerals were the result of the pandemic.

“Maybe more than I like to think. I didn’t ask,” he said.

But he does know the number was fewer than it would have been if parishioners hadn’t rallied in support of one another.

Online instruction for American Martyrs’ kindergarten through eighth grade school was implemented over a single weekend.

“We still required the students to be in class at 8 a.m., in their uniforms, not in their pajamas.The only relaxation in standards was boys didn’t have to keep their hair cut above their ears,” he said.

Curbside communion was offered during Masses, streamed from the church.

“We adapted, and it wasn’t John Barry’s ideas. It was theirs,” he said in describing the parishioners’ response to the pandemic.

“Hands went up when we asked for volunteers to deliver dinner to our seniors. The fair committee planned a virtual parish fair,” he said.

The pandemic proved a mixed blessing for renovating. Progress was slowed by supply chain issues. But the church’s closing allowed work to proceed uninterrupted. And it provided an opportunity to continue helping the poor in Latin America.

Pandemic travel restrictions prevented Monsignor Barry, and his parishioners, led by the Knights of Columbus, from making their annual trip to Guatemala to help build schools and clinics.

In place of that ministry, the commission for the carvings of the American Martyrs was awarded to Artesanos Don Bosco, in Chacas, Peru, in the Central Andes. Artesanos Don Bosco was founded in 1976 by Father Ugo De Censin, an Italian missionary priest, to provide work for indigenous Peruvians, and to help preserve their culture.

The carvings, Monsignor Barry explained, emphasize “the connection between the sacrifice of Jesus Christ, celebrated in the Mass; and the sacrifices of our patron saints.”

With the pandemic passing and the church renovations completed, Monsignor Barry could be excused for choosing this time to retire. But he won’t.

“Retirement is not in my vocabulary,” he said. ER