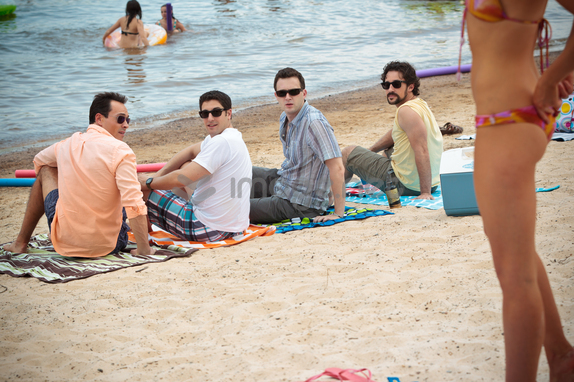 The cast of American Pie are together again in "American Reunion". Photo by Hopper Stone, courtesy of Universal Pictures

Check your brain at the door, leave expectations and aspirations at the curb, pay for your ticket to “American Reunion” and enjoy yourself. Stiffler, Jim, Oz, Finch and Kevin are back and to quote the French, “the more things change, the more they remain the same.” That infamous class of 1999 is having their tenth reunion, three years late, and the boys and girls are headed back to East Great Falls, Michigan from the four corners for this event.

Jim (Jason Biggs) and Michelle (Alyson Hannigan) are now married and the proud, but exhausted parents of a 2 year old son; Oz (Chris Klein), living large in LA with his vapid model girlfriend Mia (Katrina Bowden), is an on-air sportscaster; Kevin (Thomas Ian Nicholas), happily married, is an architect who works at home and watches fem-skewing reality TV with his wife; Finch (Eddie Kay Thomas) lays claim to some amazing adventures; Heather (Mena Suvari), Oz’s ex-girlfriend never left home but is now a physician at the local hospital with a pompous surgeon for a boyfriend (Jay Harrington); Vicky (Tara Reid, Kevin’s ex-girlfriend, has a thriving career in New York; and Stifler (Seann William Scott) is still Stifler and still living at home.

No new ground is broken, although the interaction between Jim and his widowed father (Eugene Levy) is poignant and sweet without becoming gooey. The boys (and girls) are given a chance to look back on their wilder days and reminisce. But mainly they’re there, and so are we, to party.

Sure there are the side plots – Jim and Michelle are hitting a rough patch; Jim’s next door neighbor Kara, the little girl he used to babysit, is all grown up and wants him for her first; Kevin is still attracted to Vicky; Oz recognizes what he left behind when he and Heather split; and Stifler is still Stifler in a fine portrayal of arrested development.

This film is visual, so don’t expect deep thought or cogent dialogue, but do expect some very funny sight gags, slapstick, and hilarious frontal nudity that more than justifies the R rating. Giving a running commentary on naked highjinks only serves to kill the moment, so you’ll get none of that in this review. Just trust me on this, Jim is the butt (and front) of several of the best. A cameo appearance by an uncredited Rebecca De Mornay is more than worth the price of admission and provides a most impressive moment of poetic justice.

Character growth? Marginal. Story twists? None whatsoever. Predictability? You betcha. Does it matter? Not at all. So sit back, relax, enjoy and laugh. It’s not high art, and in most cases it doesn’t reach low art, but it is funny, even if sometimes you’re ashamed of yourself for laughing.