Body Glove president Robbie Meistrell approached the Redondo City Council three years ago with a proposal to convert the city’s troubled Seaside Lagoon into an aquatics center. The saltwater pool in King Harbor was loosing $200,000 a year and facing mounting fines for pollution.

A wave machine was to be the main attraction.

With a wave machine, Redondo could host professional and high school surf contests, offer surf lessons and burnish Redondo’s legacy as the city where Hawaiian George Freeth taught Californians to surf in the early 1900s, Meistrell told the city council.

Councilmembers loved the idea, but took no action. Meistrell’s dream of a wave machine in Redondo Beach might have ended that night, had a Manhattan Beach resident Nan McFarland not mailed an Easy Reader newspaper with a story about the council meeting to her son in San Diego.

The son was Bruce McFarland, founder of American Wave Machines.

McFarland grew up surfing in Manhattan Beach, where he attended Mira Costa High School with Robbie Meistrell’s younger brother Billie. Like every South Bay surfer, he knew the story of the Meistrell cousins’ legendary dads, Bob and Bill. The twin brothers were members of both the diving and surfing halls of fame. They owned Dive N’ Surf, America’s oldest dive shop, and were the first to manufacture neoprene wetsuits, which led to the explosion of surfing’s popularity by making surfing possible year round.

“When mom sent the article, I thought to myself, ‘I’ve got to call these guys. I haven’t talked to them since high school,’” McFarland recalled. 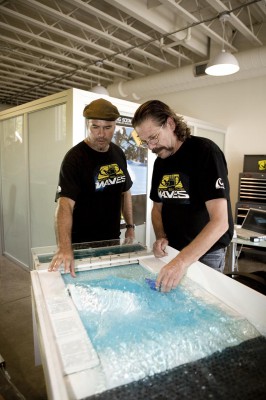 Meistrell said the trip reignited his enthusiasm for wave machines.

“My kids and I spent six days diving in the morning and surfing in the afternoon. The really cool part of Bruce’s wave machine was that when you’re waiting in line, you’re 10 feet away from the people who are surfing. You’re getting sprayed and everyone’s hooting and hollering,” Meistrell said.

Shortly after returning from Turks and Caicos, Meistrell was named American Wave Machine’s chairman of the board.

Meistrell’s and McFarland’s shared enthusiasm for wave machines have different origins, but a difference that may account for the success of their partnership.

Meistrell first surfed a non ocean wave in the early 1980s when he and his brothers traveled to a standing wave on the Snake River called Lunch Counter, near Jackson Hole, Wyoming

A decade later, as owner of the Bud Light Professional Surfing tour, he made the controversial decision to add a Palm Springs wave park to the pro tour schedule.

“The waves weren’t great. The machine pumped out a traveling wave every few seconds that was more suitable for bodyboarding than surfing,” Meistrell said. “But what was great was the audience reaction. Fans could cheer on their stars and the surfers could hear cheers.”

At an ocean surf contest, the surfers have difficulty even hearing the starting horn. The action is generally so far from shore that fans have trouble distinguishing one contestant from another, even with their different colored singlets.

Despite surfing’s popularity few surf competitions attract large numbers of spectators, and those that do, such as the U.S Championships in Huntington Beach and the Triple Crown in Hawaii, don’t charge admission.

In a surf park atmosphere, Meistrell could envision people lining up to buy tickets, both to surf, and to watch their idols surf.

McFarland, who made his own boards growing up, traced his interest in wave machines to work he did at TRW on satellite fuel tanks.

“Waves form in the tanks from the satellites spinning in space. We needed to understand how that affected the stability of the satellites,” McFarland said.

McFarland worked at TRW for eight years, after having graduated from UC Santa Barbara with a degree in engineering.

Then he moved to San Diego to start an engineering consulting firm.

“In aerospace, I saw a lot of ideas that could be employed by small businesses. So I started working with clients to develop new products,” he said.

One of those companies was working on a wave machine that could be installed at amusement parks and on cruise ships.

“I worked on their surf simulator for 10 years, from 1990 to 2000. After I left, I got together with a Hawaiian patent holder whose wave machine was inspired by people surfing the Waimea river mouth. After he showed me videos of the surfers, I licensed his patent and went to work trying to recreate the Waimea river mouth phenomenon,” McFarland said.

Previously, most wave machines had been modeled on ocean waves, which jack up and pitch forward when they hit an obstacle. Surfers slide down the front face of the wave as it topples forward.

Standing waves, like those at the Waimea river mouth and on the Snake River, jack up and then continuously reform in place. Surfers ride on the face of the wave, opposite the direction of the flowing water, with the water streaming past the rider. Both wave and rider stay in about the same place relative to the bottom.

If the stream is channeled by large obstacles, a strong flow of water will cause the wave to pitch forwards, forming a continuous barrel like that of a pitching ocean wave. The Zambizee river, with its source in Zimbia and emptying into the Indian Ocean, has a barreling wave at rapid number 11.

The wave forming phenomenon can be observed by simply letting a hose run on the ground, McFarland explained. As the flow of water slows, it naturally forms waves, or what McFarland called “hydraulic jumps.”

“It’s like a sonic boom. The water in front slows and the water behind it catches up, thickening the water and forming a wave.”

“By putting an obstacle in the path of the flowing water we can control where the wave forms,” McFarland said.

Having surfers ride a standing wave, solved a list of problems that had long vexed wave machine makers. A standing wave requires a natural balance between water depth and speed of the stream. Slower deeper moving water uses less energy than having to pump water at high speeds. And because the wave is constant, it has no flat intervals, and requires less space than a traveling wave.

With adjustments to the steepness and angle of the obstacle, McFarland said he can modify the wave from a gentle slope to one steep enough to create a barrel.

McFarland said his SurfStream design is distinguished from other standing wave machines by the fact that his waves break in water deep enough for surfers to ride conventional surfboards with fins, and to cutback and forth across the face of the wave.

McFarland said he also has a patent on a more costly, traveling wave machine, called the PerfectSwell. The first PerfectSwell, a 35,000 square foot installation, is under construction near the Russian resort of Sochi, on the Black Sea, beneath the Caucasus Mountins. McFarland said the wave pool will be completed in time for the 2014 winter Olympics, which Sochi is hosting.

McFarland did build a traveling wave for the Natural Balance Pet Foods float in this year’s Rose Bowl Parade. Tillman the Bulldog rode the wave the length of the 116-foot float, which required 7,000 gallons of water. The float set a Guinness world record for the longest and heaviest parade float every built. 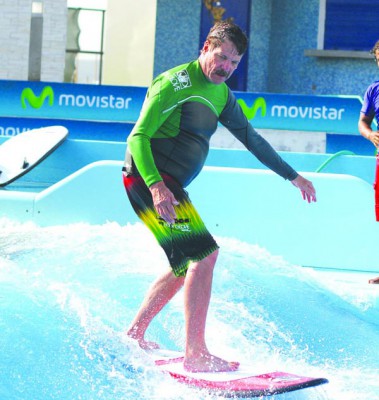 Meistrell was even more impressed with Peruvian SurfStream than he was with the smaller one at Sandals in Turks and Caicos.

“The first question a surfer asks is, ‘Can I get barreled.’ At the Peruvian wave machine you can. This is the only wave machine I’ve ridden that feels like a real wave, and that you can ride with a real surfboard. It’s perfect for training,” Meistrell said.

Surfing is an exceedingly difficult sport to learn. The reason is not that the required skills are so difficult, but because they are so difficult to practice. Hitting a golf ball straight, or hitting a fastball at all are more difficult than standing on a wave. But a golfer can hit buckets of balls and a baseball player can practice in a batting cage for hours on end. A surfer can only practice at a beach, when there are waves. And even then, a novice is lucky to catch half a dozen waves in an hour or two hour session. In most sports, improvement can be measure weekly, if not daily. In surfing, improvement is measured over months and years. Most surfers find it takes two years in the ocean to be able to paddle out, confident of being able to catch waves.

A wave machine holds out the promise to do for surfing what driving ranges do for golfers and batting cages for baseball players.

Meistrell still dreams of building a wave machine in Redondo Beach, though not at the Seaside lagoon. Last December, he went before the Redondo City Council again, this time seeking approval to close the street in front of Dive N’ Surf. He wants to use the street, and property he owns across the street to expand his shop, build a new Body Glove office, a new pool for SCUBA instruction, and just possibly a standing wave machine.

Meistrell’s unwilling, just yet, to say the wave machine is going get built. But it’s apparent, in conversation, that he sees a certain inevitability in the company that developed the modern wetsuit partnering with the company that built the first surfboard-surfable wave machine bringing to Redondo Beach the first major advancement in surf instruction since George Freeth taught surfing in front of the Redondo Plunge over 100 years ago. DZ