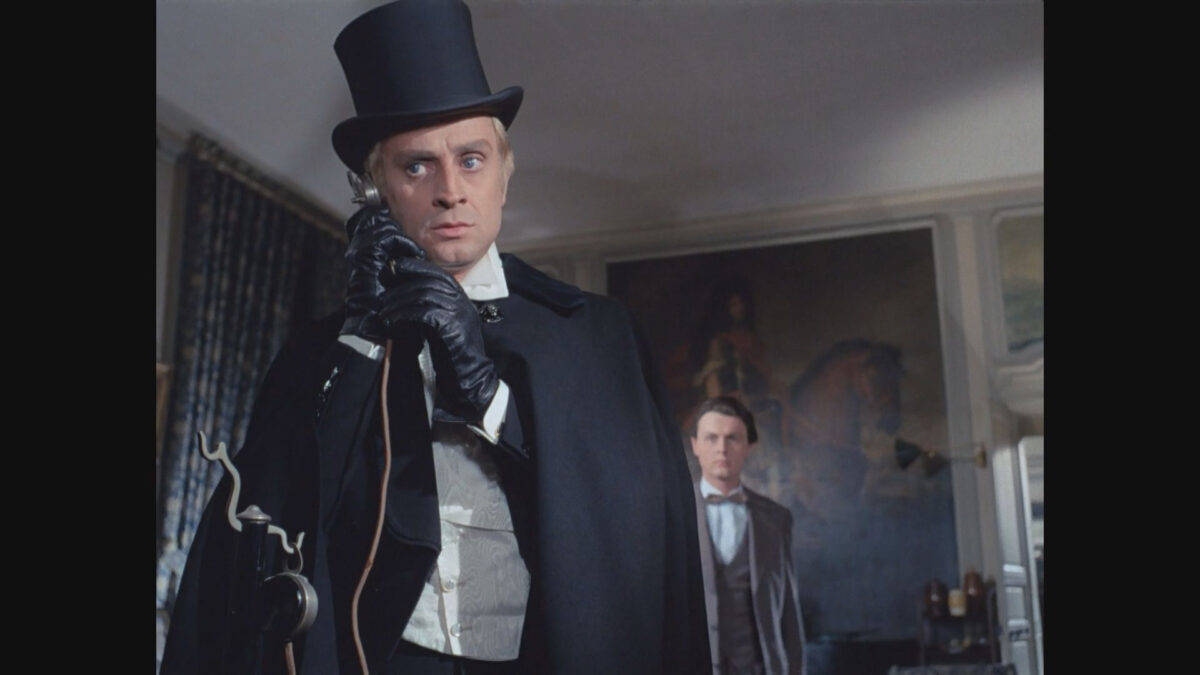 “Lupin,” that mega hit on Netflix starring Omar Sy as a modern day thief and sleight of hand expert had its antecedents in dozens of plays and films, whether it’s the American films, one starring John Barrymore, another with Melvyn Douglas, or even earlier in the silent films with the gentleman thief as protagonist. This is not to mention the myriad French films starring such luminaries as Jean-Pierre Cassel and Romain Duris. The Japanese have produced almost as many Lupin-centered movies as the French! Now MHz Choice has added the French television series produced in 1971 called, aptly enough, “Arsène Lupin” to their vast repertoire of international television programs.

“Arsène Lupin,” originally produced in 1971 and starring a renowned French theater actor, Georges Descrières, is a fun trip to the past. By past I mean 70s production values with oversaturated color, commercial décor, and procedural stories and acting. This may sound denigrating but it’s not meant to be. In terms of production values and acting, think back to the colors and direct lighting of shows like “Barnaby Jones,” “Quincy,” and “Mannix.” They were fun at the time but the stories and acting don’t really hold up. “Arsène Lupin” dates from that era and its stories are drawn from the same procedural vein. But Vive la Difference. As clunky and obvious as the storylines are, there’s still fun to be had in these slightly less than one-hour episodes. Like the most recent Omar Sy version, you know the cops will be duped, you know he’ll get away with it, but seeing how it’s done and how the writers wrap it up is still enjoyable. Yes, it’s very 70s but this Arsène is both narcissistic and a Robin Hood for income equality (after he gets his).

Most episodes are actually adapted from original Maurice Leblanc short stories centered around Arsène Lupin. Originally written in 1907, the producers have chosen Paris in the 20s as their timeframe. This is the Paris of Josephine Baker and ex-pats Hemingway and Fitzgerald. The episode made available for review was “Victor of the International Regiment” (“Victor de la Brigade Mondaine”).

Inspector Grognard has, once again, lost track of Lupin after a daring robbery. Humiliated as usual, he is determined to find his nemesis. His boss, however, believes that fresh blood is necessary and has called in an unknown but skilled detective from Africa, the mysterious Victor. No one knows him so he will be a perfect foil to trap Lupin. Grognard is unconvinced but is commanded to step aside. Into the mix we have a mysterious deposed Russian countess (remember this is post-revolutionary Russia and much of the former aristocracy has settled in Paris) who is rumored to be one of his consorts. Victor’s plan is to seduce the countess into introducing him into the gang. Needless to say there are lots of twists and mistaken identities and, no spoiler here, Lupin will come out on top, but not before he renders the “good guys” impotent.

Yes, you see it all coming. But so what. Led by Georges Descrières (a vaunted member of the Comédie Française) as Arsène Lupin, you’re in good hands. Although he plays less of a role here than he more than likely will in the future, Roger Carel as arch-enemy and incorruptible Inspector Guerchard is a pleasure. The added value in this episode (and a few to come) is a very young Marthe Keller, who would soon be launched into international stardom with Claude Lelouch’s “And Now My love” and John Schlesinger’s “Marathon Man”. She is gorgeous, charming, and oh so young.

So sit back, relax, and enjoy the predecessor to “Lupin.” It’s time worth spent.