Asking for trouble – and enjoying it 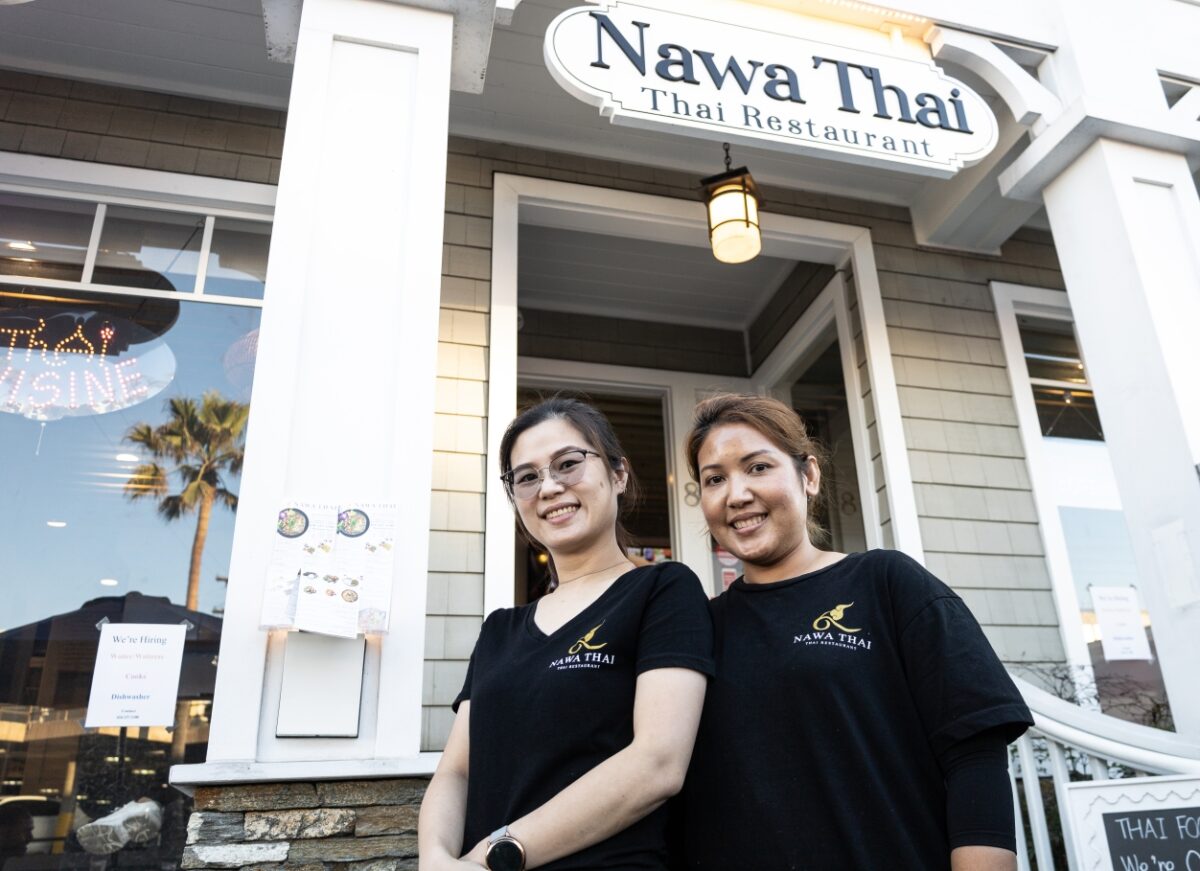 There’s a question that, however softly or politely it’s asked, should always be considered carefully. You might hear it when you decide to bet a friend that you can ride your bicycle down Pier Avenue blindfolded, shave the cat without getting scratched, or drink a whole bottle of tequila.

“Are you sure you want to do that?”

The person who asked me that question most recently was a Thai restaurant owner who was reacting to my request that the chef make a dish as hot as they would make it for themselves. Her concern was justified, because most Americans find hotter Thai dishes overpowering, but I was adamant, and she eventually accepted that I actually meant it.

The restaurant was Nawa Thai, which recently opened on Highland just north of Rosecrans. The restaurant’s name means either “number nine” or “near the ocean” depending on how it’s pronounced, and the latter is the most relevant because this is just a few blocks from the beach. It’s no coincidence that Nawa is also the first syllable of the owner’s rather long name – Thai names have complex poetic meanings, but are difficult for foreigners to pronounce, so are often abbreviated.

When Nawa Thai opened all seating was outside, and even a month later they’re still putting the finishing touches on the interior. The decor is pretty, and modern with Asian motifs rather than heavy on kitsch, with artificial foliage in planters screening tables and providing a sense of space.

The menu is heavy on Thai standards with a few novelties and specials, and as usual I zeroed in on those. On the first visit the daily specials were duck curry and lobster pad Thai. We ordered both of those as well as a starter referred to as shrimp doughnuts. These “doughnuts” are really the standard pork and shrimp patties that are formed into fat little doughnuts, but that’s actually a good idea for the same reason regular doughnuts were invented – the hole in the middle lets them fry quickly and evenly. There are six to an order, each a few bites of porky crunch to start a meal. They’re good with or without the somewhat sweet dipping sauce. The shrimp “doughnuts” at Nawa Thai. Photo by Richard Foss

The duck curry is usually made with a red curry, but Ms. Nawa volunteered it could also be made with a Panang curry. When I asked which she would order, she suggested the Panang, which has a smooth richness because of the peanuts that are ground into the coconut milk-based gravy. In this case, the duck was not cooked into the curry – rather, a slow-roasted boneless duck breast was sliced and put atop a vegetarian curry. As we do when visiting any Thai restaurant for the first time, we ordered our meals medium hot, which would translate as very mild to anyone Thai. There was a little chili heat that became more pronounced as we ate, but it never approached an actual burn. Everything was in balance to an American palate, and my spice-averse wife enjoyed it as served while I added a bit of chili to mine.

The Lobster Pad Thai was a bit less to my taste because the portion of noodles and vegetables under the split lobster was on the small side and the sauce was a trifle sweet. A lime was provided on the side, and squeezing some juice over the noodles helped the balance considerably. The chopped peanuts, which are integral to this dish as it’s usually made, were provided in a separate plastic container. On the whole it was lacking the depth of flavor that is usual for this dish, and I’ll order other things on future trips. 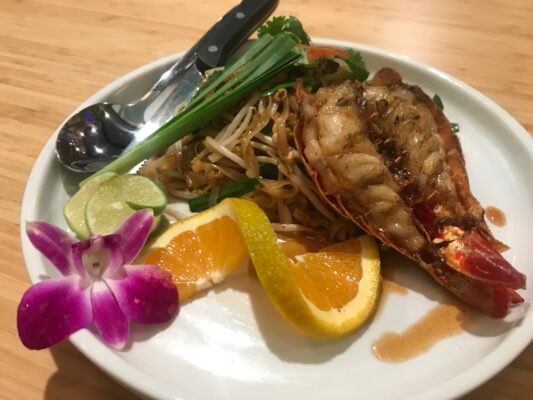 On my return visit I brought a spicy food enthusiast, and it was on this trip that I was asked whether I knew what I was getting into when I asked for something “Thai hot.” We started the meal with small bowls of two soups, the Thai style wonton and the tom kha, shrimp in coconut milk broth. Thailand has traded with China for centuries and this version was only slightly different from the Chinese tradition. There was a bit more garlic, a hint of fish sauce in the broth, the flavor a bit richer and more interesting than the standard version. The tom kha was somewhat less spicy than usual, and though there was some chili oil floating on top it didn’t make a huge impression. (This wasn’t the item we had ordered “Thai hot”, though we wished we had.)

Another item we ordered medium spicy was satisfyingly but not bracingly hot. Its name might fool Americans into thinking it’s tame. The “Authentic Thai Basil” dish uses an intense version of the plant most people think of as a mild herb in Italian cuisine. It’s sometimes called “holy basil” and releases so much oil when cooking that Thai chefs usually wear goggles so they don’t get it in their eyes. The flavor is like a cross between basil, mint, and pepper, and the version here is sauteed with pieces of red and yellow bell pepper that add sweetness. It’s not imposingly hot, but if you’re a spice wimp then ask for this mild or deal with the consequences.

The real taste bud burner was the “Fiery Beef Salad,” a mix of marinated and grilled beef strips, two kinds of onions, cucumber, carrot shreds, and tomato tossed in a pungent, vinegary dressing. The rice vinegar and fish sauce amplifies the flavor of chili and ginger, and it’s a thrill ride for your mouth. You will sweat, possibly gasp, and then want more. We had ordered a side of cucumber salad to counteract the heat, but it arrived in a cloying sweet dressing. After it was balanced with a bit of vinegar it did the job it was there for.

Knowing we had ordered two spicy dishes, we also got Pad See Ew noodles, which are always a relatively mild dish. The flat noodles in mild gravy with Chinese broccoli helped quiet the fire alarm in our mouths. Part  went home and was great the next day.

Nawa Thai does not have a beer and wine license, but soft drinks and juices are offered. The restaurant is reasonably priced given the beach location and you can figure on ample portions of food for $25-$30 per person. The servers display the polite courtesy that has made Thai hospitality famous, and the restaurant is a great addition to the local dining scene.