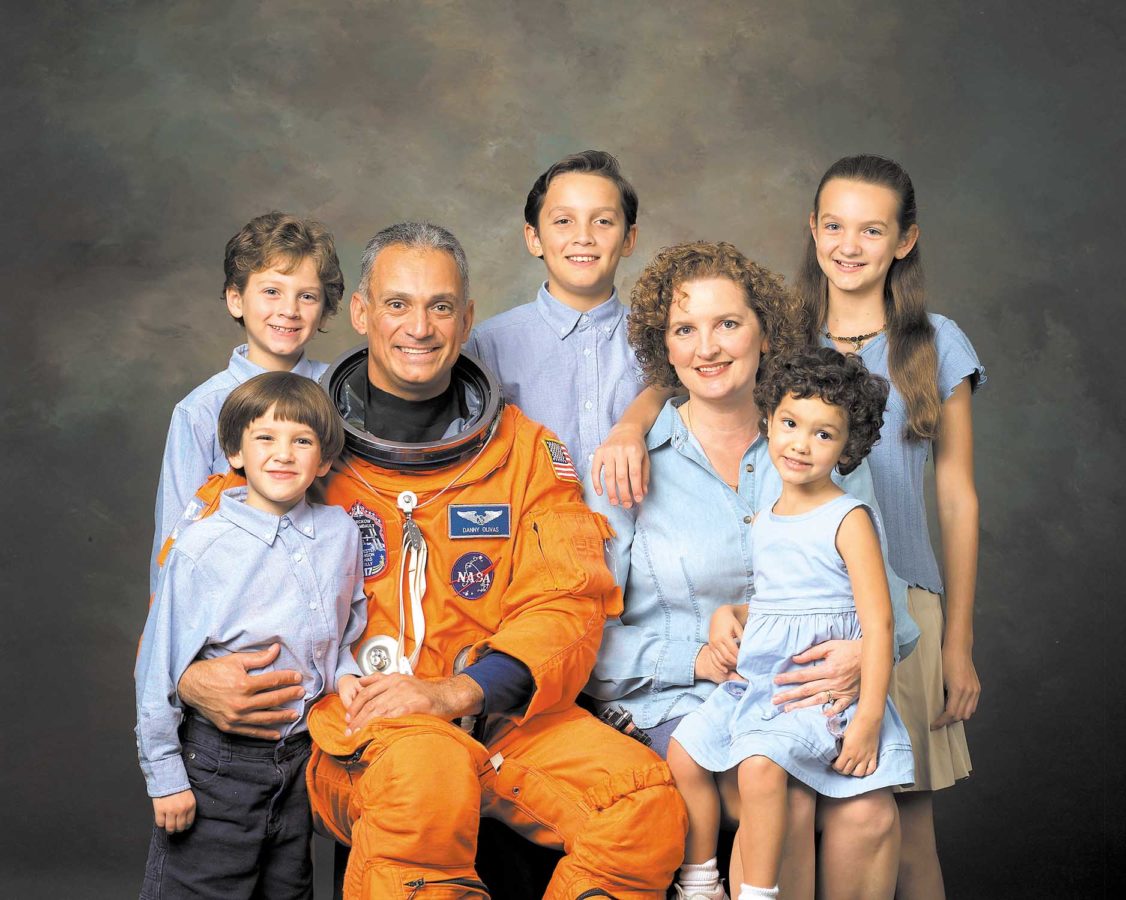 Danny and Marie Olivas and their family. Photo courtesy NASA

Danny Olivas was 248 miles above the Earth. As an astronaut and crew member on the STS-117 Space Shuttle Atlantis mission in 2007, Olivas was among the select few—562 out of the 108 billion people who have ever lived, to be exact—to ever see our earthly home whole, in truly full view, a blue orb aloft in the vastness of space.

Olivas was awed by the sheer beauty of what he beheld. Like any faraway son, he took special care to look for his hometown, El Paso, Texas and was struck at how it blended with neighboring Juarez, the cities together engulfed by the Chihuahua desert. His experience in space forever altered Olivas. More than a dozen years later, he remembers what he saw and felt almost viscerally, each and every day. But the main impression Olivas carries with him is less about celestial bodies and geographical perspective, and more about his astonishment for humankind — the wondrous accomplishments of this species, floating together through the backdrop of a seemingly endless void, contradicted by our maddening capacity to see ourselves as separate.

“Because we are out here by ourselves. This is rock,” said Olivas, now a Manhattan Beach resident, in an interview last year. “There is not a lot of rocks out here like this that we can get to. In fact, the closest one we can get to, the moon, is pretty desolate. So we don’t have a whole lot of options here. If we don’t work together to take care of our own home, and take care of each other, we are out of options. As wonderful as we are as human beings, being able to create and innovate, and have all these wonderful things that we build, if we work together, we could just do so much more….Yet we spend so much time focusing on those things that divide us and make us different. As you look down on the planet, the only borders you see are those between land and sea. And really everything else is something imagined by humans.”

In the last year, Olivas was especially jarred by what occurred along those imagined borders. As has been well documented, changes to the United States immigration policy have resulted in the separation of 69,550 migrant children from their parents. These children have been held at detention camps along the U.S.-Mexico border, sometimes for several months, often in crowded, unhygienic conditions. Six have died. Hundreds of others have been sent back to an uncertain fate south of the border.

Olivas, whose own great-grandfather crossed that border a century ago, is aghast that children are being used as pawns in the politically charged arena of immigration policy. He believes that in a nation built by immigrants, this is an issue beyond politics.

“It is the American Dream,” Olivas said. “And so it’s appalling that in order to manipulate people, we are taking the policy we have now and deploying it in such a cruel and inhumane way. This is not who I know America is. We love our children here. We love all children. The thought of what we are doing to these children, causing long-lasting harm to them…It’s unconscionable. That’s why, as Americans, we have to stand up for what and who we are.”

Olivas and his wife Marie this week are launching the Space for Everyone Foundation, a non-profit whose mission is to bring awareness to the plight of immigrant children and to support the health and well-being of all children and families, regardless of where they call home. On January 5, the foundation will launch with a special event at Vistamar School in El Segundo. The evening will include a screening of “Witness at Tornillo,” a documentary that chronicles the efforts of activist Josh and Melissa Rubin to bear witness at the immigrant children detention facility at Tornillo, Texas. Josh Rubin will be present for the screening and take part in a panel discussion afterward led by journalist Sonia Nazario, a Manhattan Beach resident, who was awarded a Pulitzer Prize for her reporting on immigration. The panel will also include astronauts John Herrington and Garrett Reisman.

Danny and Marie Olivas met the Rubins when they traveled last year to Texas. After they were denied access to the Tornillo facility —  where Danny hoped to comfort the kids in detention and give them some hope by giving away a children’s book he’d written, in Spanish and English, about the Space Shuttle program. He wanted them to know their dreams could still come true. Turned away, they began documenting what they saw, such as kids waving at them through the camp fence, and a legal proceeding in which two unaccompanied little boys, ages 3 and 5, were expected to represent themselves before a judge.

“The long-term effects of what is happening to these children is going to be more dramatic than what we could ever imagine,” Olivas said. “I think it is upon all of us who are moved by what is happening to keep attention on it, and to do everything we can to make sure people are aware and see what is going on—basically, how un-American this it—and to do something to correct it.” 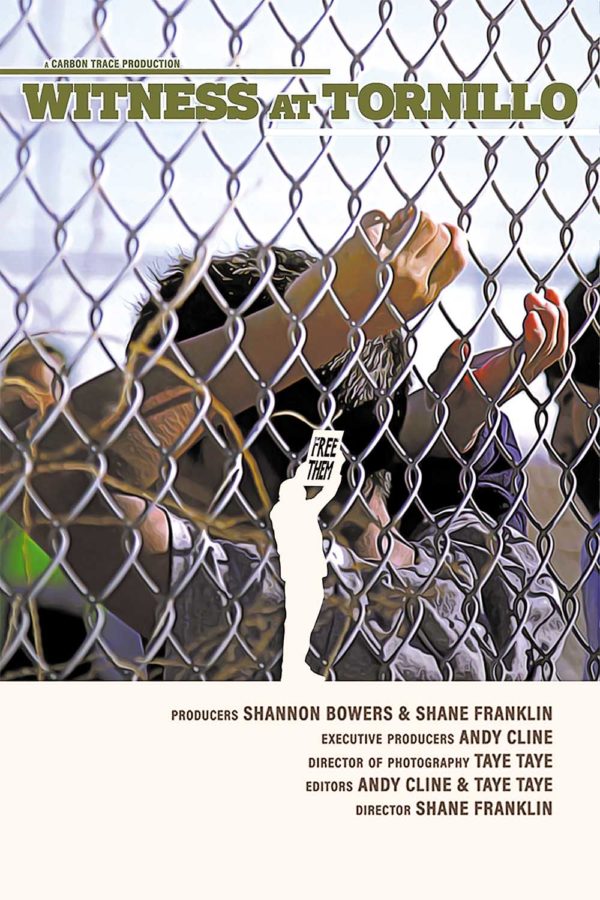 The Tornillo facility was originally set up to house 400 immigrant children but was expanded quickly into a tent city that housed 4,000 kids. Josh Rubin was not given much access to the facility, but remained on its outskirts for months, filming and asking questions and largely just making sure that those imprisoning the children knew they were being watched. “Witness at Tornillo” documents this.

“The kids are hidden behind walls and berms and tarps, to make sure we don’t see them,” Rubin says at one point. “I could give directions 20 times how to get here, and people are going to get lost on the way here. This is a place to get lost. Those kids could get lost. I came to make sure that they didn’t get lost.”

Tornillo closed last June after receiving extensive scrutiny, in part because of the efforts of witnesses such as Rubin. But it was recently announced that the facility would reopen as a detainment center for adult immigrants. Elsewhere in the immigration detention system, nearly 4,000 children remain separated from their parents, in U.S. government custody. Olivas stressed, however, the importance of seeing beyond the statistics and recognizing the real human story of children who have frequently journeyed hundreds of miles, fleeing violent conditions, only to face the worst thing that can happen to any child —  separation from his or her parents.

“I wish the decisionmakers carrying out this policy could for one-second place themselves in another set of shoes, not those they had the good fortune to be born into,” Olivas said. “Because this is nothing other than bad luck for these kids, to be born into these circumstances. They should ask themselves, how would they feel to have their children stripped away from them?”

Councilperson Hildy Stern said that the awareness the Olivas family is bringing to this issue goes beyond city, state, or national politics and is instead a reminder of our common human bond.

“We cannot forget the trauma the children who have been separated from their families and are still living in detention centers face every day,” said Stern. “By hosting this screening of Josh Rubin’s documentary, Danny and Marie Olivas help to remind us and teach us about these children’s horrific situation. The launch of the Olivas family’s Space For Everyone Foundation is another example of the selfless work they do to assist the children by continuing to raise awareness and to find resources to support those detained in this country. We have a lot to learn from what Danny and Marie have observed. I am immensely grateful to them for bringing this event to the South Bay and appreciate their leadership in finding solutions for these children.”

The  Space for Everyone event on Jan. 5 is in collaboration with South Bay Cares and will benefit Doctors Without Borders/Medecins Sans Frontieres (MSF) and the Witness Fund.  Opening reception at 5 p.m., screening at 6 p.m. $20 donation requested. Vistamar School, 737 Hawaii St., El Segundo. Purchase tickets at BrownPaperTickets.com or inquire at sbcarestreasurer@gmail.com.