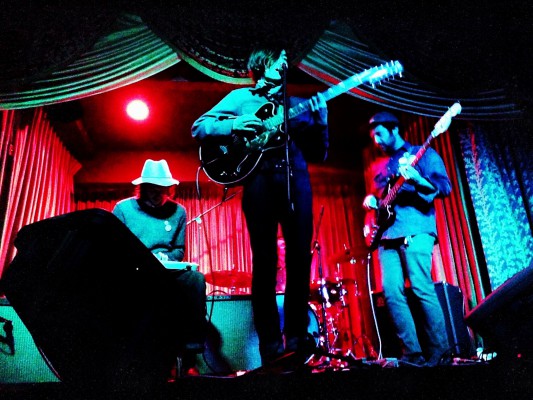 It really began as a joke. One part young and fun idiocy – one part artistic creativity – one part raunchy Australian jest – one part music. A band born from El Segundo, a band called Froth.

The band was unintentionally founded by El Segundo natives Joo-Joo Ashworth (guitar, vocals) and Jeff Fribourg (omnichord), who each graduated from El Segundo High School in 2012 and 2008, respectively.

“It actually started as a joke,” explains Ashworth about the forming of Froth. “Like we started Froth before we started playing music together… we knew this guy who pressed records in El Segundo… and he was gonna like press a vinyl for us for free with nothing on the grooves, and we were gonna make like album art and give it out.”

A blank record? “Yeah,” Ashworth forces through a laugh. “And then the needle just goes around for like 20 minutes on each side without playing any music.”

Fribourg had been designing album cover art for actual bands, and this farcical act sort of provided a silly and fun type of practice. “But then one day I just came over with Bert,” continues Ashworth, referring to childhood friend Bert Hoover, who plays in the local El Segundo/LA-based band Cab 20. “And we like wrote some songs, and then we started playing shows, and then it kinda like took off from there.”

While the LP of meditative madness was never “released,” the band Froth was born. Fribourg had an omnichord which he’d never really played, Ashworth had written some songs, and Hoover sat in on some bass lines, all without serious intention; but it sounded good, and after recruiting additional band mates they began playing shows. In fact, their first performance was coincidentally at last summer’s annual Ourbq show in El Segundo (a backyard barbecue and live music event hosted by Fribourg), which was presented by Dirty Hippie Radio & Mock Records. With Jeremy Katz from Florida taking over bass, and Cameron Gartung from Murrieta, CA on drums, the joke was complete.

Not quite… Like laundry detergent introduced to a jacuzzi, the joke continues…

Ashworth reveals, “We just came up with the name as like this joke from this Australian term ‘Froth;’ which like we found out came from the term ‘Frothing at the gash,’ which is like a sexual reference.”

Indeed, it turns out “Frothing at the gash” is a crude Australian idiom which combines the phrase “frothing at the mouth” with a slang term for vagina: gash, typically referring to a woman who is eager to have sex.

Let the giggles abound, but Froth’s music is just as good and nasty as its vulgar roots. They’re blending a delicious combination of ‘60s garage, psych, surf, low-fi, and shoegaze drenched in Ashworth’s exaggerated lyrical compositions bathed in washed out, heady vocals. Maybe some Country Joe & the Fish, Creation, and general ‘60s nuggets from the old school, mixed with some Brian Jonestown Massacre, Black Angels, and Entrance Band from the newer school. It’s a neo-psychedelic sound quite popular in parts of Europe currently, as well as throughout Los Angeles – which is where Froth has taken it. They’re presently based in Echo Park.

“It was easy growing up so close to the greater Los Angeles area where there are so many bands playing shows and so many up-and-coming bands doing cool things,” explains Ashworth. “There weren’t a lot of bands in El Segundo, like barely when growing up. But I had grown up with Bert [Hoover], and he’s in Cab 20, and I would go to a lot of shows with him [in Los Angeles]… LA has like a big part in the music industry, like every band comes to LA to play shows and tour, and it’s kind of like a big place for a band to be, and it was just really easy to find out about bands. It was so close to kind of like the epicenter of music I guess.”

While today there’s a handful of good bands buzzing out of El Segundo, including Hang Dog Expression, Cab 20, and Hoist The Colors, Ashworth suggests there’s a lack in nourishment in the local infrastructure for a healthy music scene. He’s become very influenced by the LA scene, wherein he finds Froth’s music much more well-received than at the beach.

“I just think that like a lot of kids growing up here aren’t usually exposed to going to see shows growing up,” explains Ashworth. “And like, it’s kind of everything here, I don’t know, it just doesn’t seem like a super artistic community a lot of times. And like everything in the South Bay, as far as like art and music, seems like very hard to get to. Like if there was a band from El Segundo that was doing really cool things, you probably like would never find them, because there’s just not so much going on in the El Segundo area where a band could play a show and people would come out and buy music…”

The diversity throughout Los Angeles on any given night of the week available to music heads is difficult to match. The breadth of possibility would be inevitably alluring to a young, raw band in search of a broader demographic of like-minded audiences and bands with which to engage the neo-psychedelic revival and all the art galleries, clubs, hovels, co-ops, records, posters, buttons, tight pants, and hip cats that come with it.

But Ashworth finds worth in his El Segundo roots, and identifies unique influence from growing up on the north side of the Hyperion Plant.

“Definitely growing up in El Segundo, growing up surfing, has had an impact on the kind of music I listen to,” he says. “El Segundo has a pretty good scene of soul surf culture that kind of like embraces that kind of past, and like 50s and 60s… you’re listening to a lot of like 60s surf and 50s stuff, and definitely watching Endless Summer, and Bruce Brown movies. You definitely start to like hear all those surf bands, and everybody wanted to do that, you know?

“Mostly you see that in surfing. Mostly, kids that grow up in El Segundo are just kind of doing the regular thing, but like the whole Tyler Surfboards thing… there’s a lot of people driving old hot rods around, and have old surfboards…

“Also, El Segundo is so close to KXLU, and so there’s always that independent radio station that’s playing underground local LA bands and new music that you never get to hear on the radio otherwise, you know?”

In keeping with the area, Froth was scheduled to perform a live set at KXLU last Friday, Jan. 25 during the 5 p.m. broadcast of Live at Five on KXLU. After a bundle of shows in the greater LA area, they’ll be playing their hometown on Saturday, Feb. 16 at South Bay Customs for Cab 20’s vinyl release show, presented by Dirty Hippie Radio & Mock Records.

The band released a 20-page zine accompanying their demo EP, which is sold out, but can still be listened to on DirtyHippieRadio.com. They’re releasing a tape with Burger Records (Fullerton) in late Feb/early March, for which the CD and vinyl LP will later be released on Lolipop Records – a startup indie label that will operate out of a record store in Echo Park which Jeremy Katz of Froth is opening in Feb. with two members of friend band Mr. Elevator & The Brain Hotel. A Lolipop west coast summer tour is in the works.

Froth performs live in Echo Park at The Echo on Jan. 28, downtown at The Smell with Cab 20 on Feb. 3, Harvard and Stone in Silver Lake on Feb. 5, and the Dirty Hippie Radio & Mock Records Present Cab 20 vinyl release show at South Bay Customs in El Segundo on Feb. 16. You can listen to Froth, Cab 20, Mr. Elevator & The Brain Hotel, and Hang Dog Expression on DirtyHippieRadio.com, tuning you in to the independent music community.