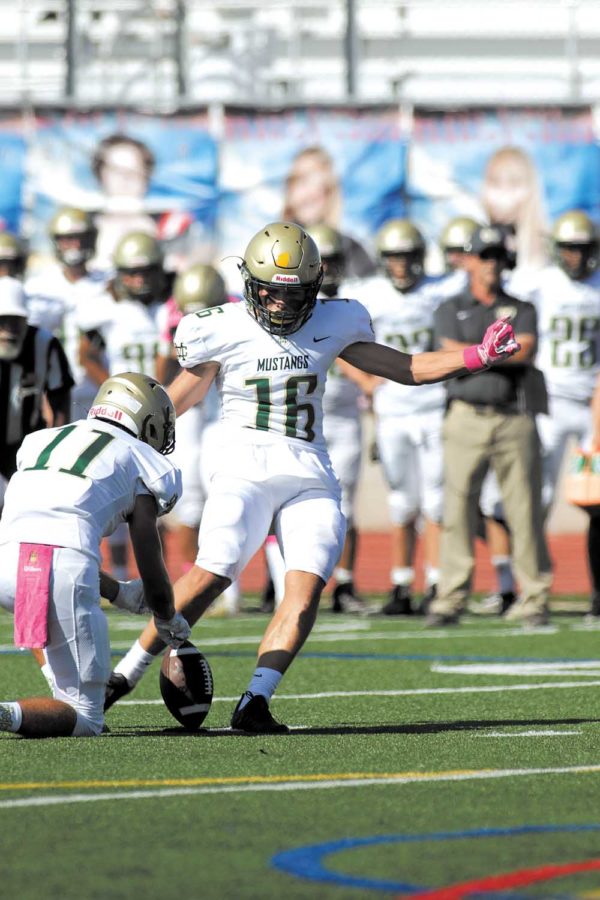 Thomas Southey kicks a field goal to give Mira Costa a 3-0 lead, their only lead of the game. Photos by Ray Vidal

In the end, Palos Verdes slogged its way to a 34-9 victory by virtue of having a deeper bench, more big bodies to throw into the battle, and a more emotional crowd gathered for the Sea Kings’ homecoming weekend. Mira Costa fans who braved the blazing late-afternoon sun on their side of the field numbered fewer than 100. And every time they got their hopes up the Mustangs would draw a penalty or turn the football over.

If they lose the Bay league championship – they’re now 0-1 in league and 3-3 overall — Mustang fans will look back and wonder how their team let this game slip away and in the process stop their three-game winning streak. As late as midway through the fourth quarter Costa trailed by only six points, meaning a touchdown and successful point-after kick would have given them a one-point lead with little time remaining.

But another fumble and then another couple of interceptions sealed their fate and handed the Sea Kings a decisive lead that made the game seem one-sided when in fact it could have gone either way until the last six minutes.

The sad part was that Mustang quarterback Slingin’ Sam Whitney piled up yardage all day long, as Head Coach Don Morrow went away from his traditional 3-yards-and-a-cloud of dust approach to take advantage of Whitney’s strong arm and reliable accuracy. Because Whitney is their strongest offensive weapon, Morrow has been flexible enough to turn his team’s offense into a variation of the Air Raid system so in vogue on college campuses this season: pass early, pass often and then go to the run when the defense sets up to stop the pass.

The game started appropriately enough with a fumbled kickoff return by PV, setting Costa up at the PV 29-yard line with a short-field opportunity for a quick touchdown that could have set the tone for the rest of the game. 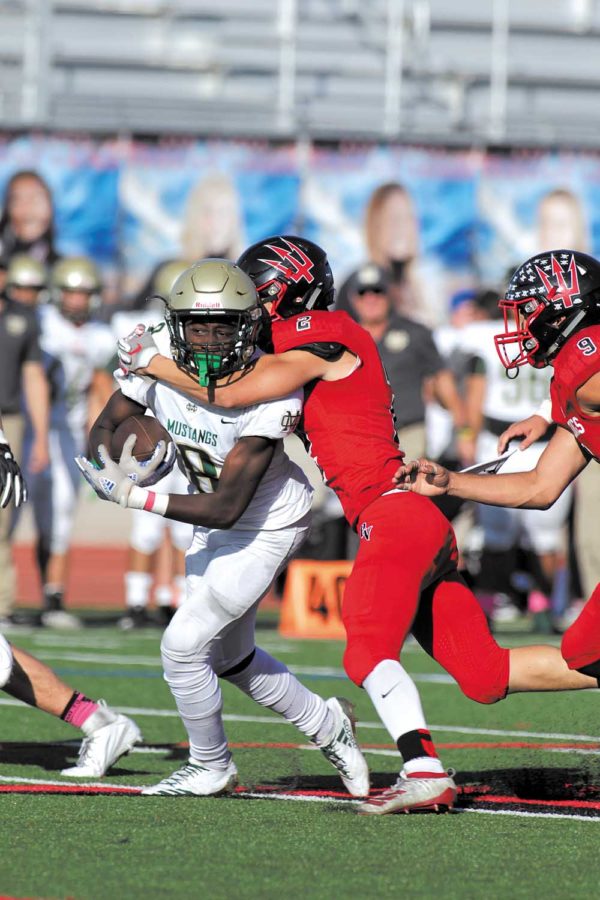 Instead, the Mustangs failed to punch it in and had to settle for a 38-yard field goal by Thomas Southey that gave them a 3-0 lead, which turned out to be their only lead of the game.

Costa stopped PV on a three-and-out series, but on fourth down as PV prepared to punt Costa was called for an off-sides that gave the Sea Kings a first and 10. Once again they held PV and forced a punt.

Starting from their own 10-yard line, Whitney marched the Mustangs down the field to PV’s 10-yard line with a series of pinpoint passes to Kian Twofighi, sandwiched around a 12-yard run by Bryce Carlisle.

But just as they were about to score a TD, PV recovered a Costa fumble and started a drive of its own. That stalled out, and MC took over again on downs.

Again Whitney’s passes drove the Mustangs down the field, but as they neared the goal line Whitney threw the ball right to a PV cornerback. The home crowd went crazy.

This time PV made them pay. Michael Nagy ended a drive-by sprinting seven yards around the right end for a touchdown that gave the Sea Kings a 7-3 lead.

Next, it was Costa’s turn to fumble the kickoff. PV returned the favor by fumbling again and losing the football. But Whitney was sacked on third down and the Mustangs had to punt. The problem was that the snap was so high it flew over the kicker’s head and actually went over the goalposts and out of the end zone. Costa was called for a safety, PV got two points and now they led 9-3.

On the next Mustang drive, Whitney completed several passes to Danny Millea, but that drive fizzled out when Southey missed a 35-yard field goal attempt and the first half mercifully came to a close.

The football farce continued as PV opened the second half with another touchdown run by Nagy. After they missed the PAT the lead stood at 15-3.

Costa finally scored on its next drive with Whitney drilling a 15-yard slant pass to Millea, but Southey missed the PAT and the third quarter ended with the Sea Kings clinging to a 15-9 lead.

As the fourth quarter began, once again Whitney passed his team down the field, but this drive was ended when the PV linebackers blitzed an exhausted offensive line and Jake Wilson intercepted Whitney’s pass.

With only six minutes left and Costa still lurking within 6 points, the Sea Kings poured it on with three TD’s in the last six minutes.

On top of the sloppy game played by both teams, the four-man officiating crew turned in one of the most inept performances ever witnessed on a South Bay gridiron. They called several can-you-believe-it penalties that drew sustained booing from both sides of the field. And they slowed the game down for long stretches as they struggled to spot the football correctly and get the right down and yardage. At one point in the third quarter, the game stopped for nearly 10 minutes while the officials stumbled around, argued with each other and generally tried to figure out what they should do next. Boos cascaded from all corners of the field.

Costa will try to get back on track Friday night when it hosts Peninsula.

Across town, Redondo destroyed Compton Centennial 34-0 to improve to 4-2 on the season and 1-0 in the Bay League.