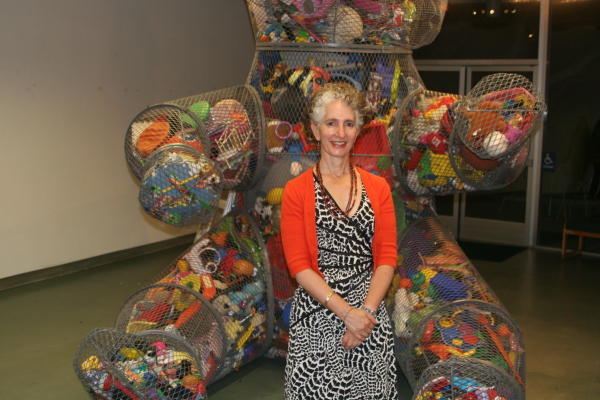 Joyce Dallal and her work at the Creative Arts Center in Manhattan Beach. Photo

“Overall, the art community is growing and thriving,” says Peggy Zask, “otherwise we would have nothing to be talking about, right?”

“I have to tell you that Bob’s show was very promising to me,” says Homeira Goldstein, referring to Bob Van Breda’s “Junk.” “We had the most visitors ever from Manhattan Beach and some very special people. So the short answer is, the outlook is positive.”

“2012 was an exciting year for the Manhattan Beach art community,” notes Megumi Moisen née Sando. “A couple of major art projects were launched, and nationally and internationally renowned artists were selected: Lita Albuquerque for the new library, and Mags Harries and Lajos Hedder for the city’s Centennial Project.”

“The response is always amazing when it hits the masses and they come to see the work,” says Ron Libbrecht. “The difficult part is keeping the audience in repetition.”

“We will be working very closely with Cannery Row Studios this coming year to promote local artists and their art,” says Kevin Holladay. “With the continued support of the community we are hoping to be here for many years to come.”

Richard Stephens of Cannery Row Studios has just closed “Richard and the Three M’s” at his gallery and intends to take a hiatus from putting up and taking down shows, an arduous process under the best of circumstances, and he’s set to hand over the reins to John Cantu. Stephens wants more time to paint, and who can fault him for that?

From the looks of it, then, art appears to be thriving in the South Bay. Don’t forget Ken Klade’s annual Hermosa Beach Art Walk, the formidable Redondo Beach Art Group, plus there’s Max Presneill at the Torrance Art Museum, Susanna Meiers at El Camino College, Scott Canty at the Palos Verdes Art Center, Vanesa Andrade at ArtLife in El Segundo, David Parsons at Summer Studios in Lomita, Andrea Luse at MaGriffe near Angels Gate in San Pedro, Angels Gate itself, plus an often exciting cluster of galleries centered around Sixth and Seventh Streets in downtown San Pedro. 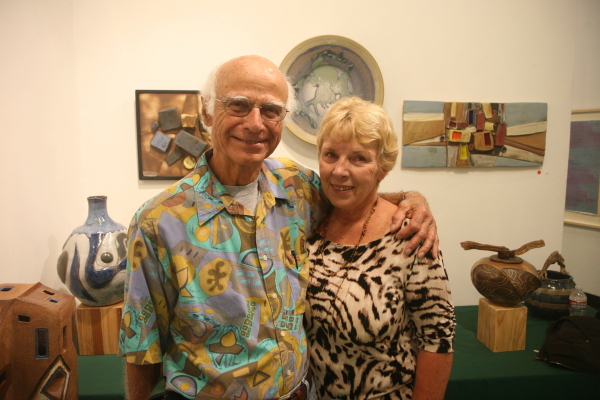 Frank and Casey Matranga, with Frank’s work behind them, at Cannery Row Studios in Redondo Beach. Photo

These latter galleries may be slightly out of the area, but many local artists find them an ideal place to exhibit, and in some cases to curate shows as well. Jim McKinniss and Paul Blieden, with Ray Carofano, put up a much-praised photography show at The Loft in San Pedro this past summer.

The city-supported galleries have a better chance of holding the line than do the smaller, independent galleries. 608 North, for example, is now a year old, but it’s not been an easy year as Kevin Holladay points out, at some length:

“We have received a lot of support from local artists, media, and the community at large. Unfortunately, sales are weak, and if it were not for our gift shop we would be in real trouble. It is a struggle to make ends meet, even though we have put on several great art exhibitions.

“Our combined event with the Redondo Beach Art Group and Cannery Row Studios” – he’s referring to this past summer’s “Imagine” – “had an excellent turnout. However, it is really disappointing that so few of the people that attend these events actually purchase any art. I feel bad for the artists. When they sell a piece of art it not only affirms their talent – and they are talented – it also puts a little money in their pockets and supports the gallery. Many artists really do fall into the ‘starving artist’ stereotype.”

Unless it’s being assisted financially, whether through school funds, city funds, or a well-to-do patron of the arts, this is very much the current reality of a privately-owned art gallery. Those that have come and gone include Alex Haleigh in Gardena, Vis-à-Vis in Redondo, and the once prominent Gallery C in Hermosa Beach.

One we will be looking forward to is the El Segundo Museum of Art, opening in late January.

And when we look back? There were significant art shows at the Creative Arts Center in Manhattan Beach – featuring Catherine Tirr, Edith Abeyta and Joyce Dallal, and Alison Wright, not to mention the city’s historical photo exhibition to celebrate its centennial year. In Redondo Beach one must note the ongoing efforts of people like Nina Zak Laddon, Georgette Gantner, Sandra Liljenwall, Tasha Garfield, Karen Baughman, and Stefani Conniff, among others, who have organized pop-up galleries or have been instrumental in promoting the Power of Art.

“I’m positive about the arts in the South Bay and hope everyone feels it too,” says Peggy Zask, who intends to start a non-profit foundation “for bringing together all the artistic energy of the South Bay and California.”

Times may be hard, but with our interest and support galleries will continue to exhibit the best works that our local artists can give them.

Related: Our Lady of the Manhattan Beach Arts