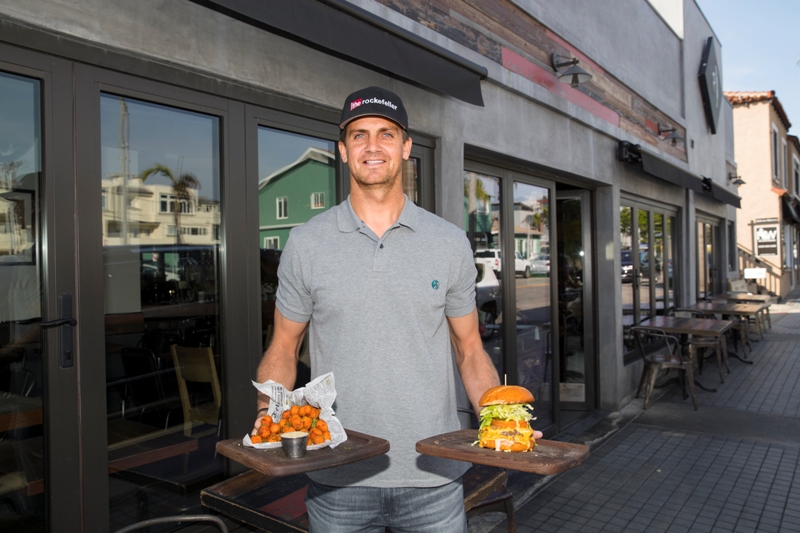 Building a brand is more than a matter of a catchy name and an interesting logo. Those things are helpful but have to represent something, some theme that makes the business itself stand out from the crowd. Once you have that, so a marketer would say, you should build on it but never change the ideas that are at the core.

The people who run The Rockefeller evidently don’t believe in this logic, because the restaurant has undergone a slow but almost complete transformation. The place that started out as a gourmet-burger-and-a-beer spot still serves burgers and beers, and a few of the sandwiches and tacos that were on the menu when they opened, but the energy is elsewhere. They’ve become more upscale and eclectic. A winter menu crafted by consulting chef Michelangelo Aliarga of Primo Italia has taken the menu to a new heights in subtlety and style.

The new menu is served at both outposts of The Rockefeller. I experienced it at the Manhattan Beach location because I happen to like the more low-key style there. The one in Hermosa is more the showplace thanks to mosaic pillars and other fancy architecture, but Manhattan Beach is more cozy. The feel is slightly like a rustic cabin, a comfortable place to settle in for some appetizers and a glass of wine before dinner.

Appetizers include the new octopus lollipop and also the Rockefeller Mess, which has been on the menu for a while. The name of that latter item is as accurate as it is amusing, because the pile of fries topped by pickled fresno chiles and onions, guacamole, and allagash queso sauce is a sloppy joy. The flavors go together surprisingly well and there’s an interesting mix of hot and cold items and different textures. I wish they used cottage fries or waffle cut chips because it would make this so much easier to eat with a fork, and there’s no other way to do this without wearing some of it.

The octopus lollipop was a daintier portion, a skewered and grilled chunk of the thick part of the tentacle over a slice of griddled potato, served with both a kalamata olive aioli and a dab of Peruvian green sauce. The green and purple sauces looked lurid but tasted great. I could have easily eaten a full plate of this as a main course. 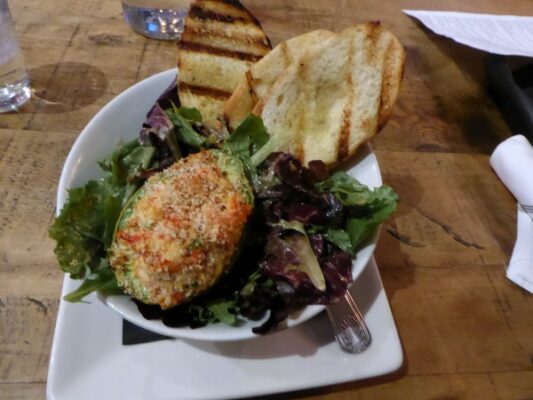 The lobster-stuffed avocado at The Rockefeller. Photo by Richard Foss

Another relatively new item is actually a twist on an idea a century old. Stuffing an avocado with lobster meat seems to have occurred to someone around 1920, when the California Avocado Society published a recipe. In that one the seafood was simply mixed with mayonnaise and garnished with parsley, but the one served by The Rockefeller reflects modern tastes. The shellfish is mixed with chopped green onion and tomato, then ladled into the avocado, topped with breadcrumbs, and run under the broiler. It’s necessarily a small portion because avocados aren’t very big, but it’s completed with a green salad and toast and is satisfying.

During a recent visit, I verified that the burgers here are still quite good, but the most exciting entrée was 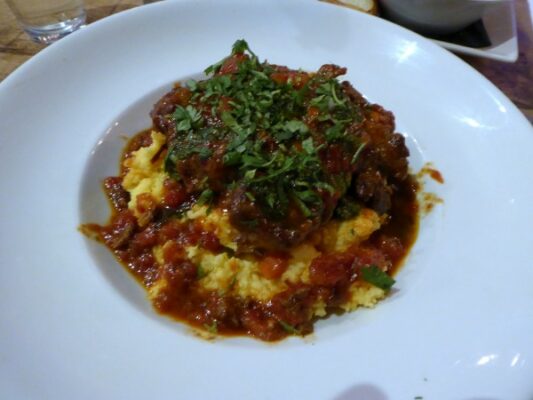 The Rockefeller’s pork cheek with polenta. Photo by Richard Foss

from the new menu. It’s braised pork cheeks and polenta in a tomato and vegetable sauce that contains chimichurri and cilantro. While this item was created by an Italian chef and includes tomato sauce with olive oil and garlic, it’s not Italian – the herbs are the French mirepoix of onions, carrots, and celery. The flavors are almost Southern U.S. thanks to the similarity between polenta and properly made grits, but the sprinkling of cilantro gives it a dash of South America. It’s a luxurious companion to the meat, and since pork cheeks have a rich character and cook to disintegrating softness the meat has the character of a perfect pot roast. It’s a fantastic winter dish and as far as I can tell the standout on the menu. (I say as far as I can tell because I have tried to order another item, the sea bass in chermoula sauce, but they were sold out of it twice. If it is more popular than the braised pork cheeks, it must be amazing.)

The Rockefeller doesn’t serve liquor but has a good selection of beers and wines, some from unusual producers. They briefly offered a wine from Idaho that was worthwhile for the novelty value, but I preferred the Ripper Grenache from Booker, near Paso Robles. The selection changes and sometimes they offer by-the-glass items that aren’t on the regular menu, so it’s always worth asking if there’s something new.

The Rockefeller has matured in a way that is unpredictable and interesting, and I hope they continue in this vein. Their success may confound some of the usual rules of marketing, and is all the more admirable for it.