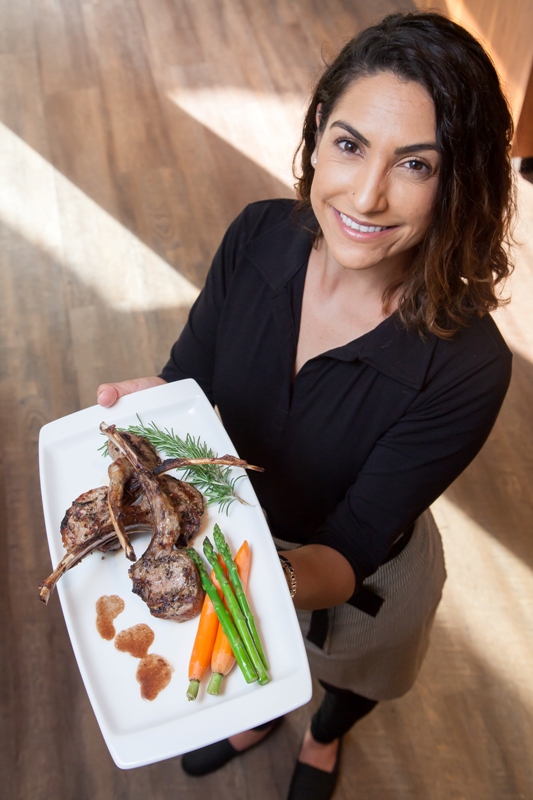 I try to be optimistic about every new restaurant, but sometimes I see a business plan and wonder what the owner is thinking. As an example, consider a restaurant space with low visibility from the street that has had a turnover in operations about every two years as concept after concept has failed. Someone has the idea of putting in an Italian restaurant, despite the fact that there are four other places serving Italian food within three blocks. Sound like a good idea to you?

It could be if the newcomer offers something none of the others do, and on this Hermosa’s Radici scores on two fronts. The high style interior is a startling departure from the beachy casual vibe of their competitors, and the cuisine is rigorously Italian rather than the Cal-Italian hybrid you get everywhere else in town. In context, what might seem like a silly idea is both well-calculated and bold.

The design and décor don’t attempt to recreate some village trattoria, opting instead for the sleek, modern look of a city ristorante. Particular care has been taken with the lighting. Artfully asymmetrical fixtures and the way they gently but completely illuminate the room. Your expectations are set and you hope they’ve put as much thought into the food as they did the environment.

The area by the bar is quite loud, but there is a relatively quiet back alcove where our server turned down the music on request. This was appreciated because we had a lot of questions about the menu. These were mostly about recommendations and wine choices, because there are no particularly arcane regional dishes or flights of fancy on the menu. The cuisine is Northern Italian in style, with a bit less seafood than we expected and a variety of pastas and grilled items.

We ordered starters as soon as we knew what we wanted, which turned out to be a good move because some items that are usually made in advance and kept refrigerated are crafted from scratch here. It would be a good move for servers to warn diners when they order – I noticed a couple at a nearby table fretting over the wait. There are probably faster items if you have a theater ticket burning a hole in your pocket, so you should ask what they are.

Our starters of cheese and eggplant rolls, stuffed baby squid, and a Mediterranean salad were worth the wait. The portions on the first two were a bit smaller than expected, with two rolls about three inches long and two squid, but we were enchanted by the flavors. The ricotta cheese had been made in house and the eggplant was tender but toothsome. The sauce is called sugo on the menu, a catch-all term that literally means juice, and it’s appropriate because there’s a lot of fresh, fruity flavor balanced with herbs and a whisper of garlic. The garlic was more out front in the octopus, which had been stuffed with herb butter and baked to tenderness. I generally prefer this item grilled, but admired this version because it was excellent just as it was.

The Mediterranean salad was made with excellent quality produce, but the dressing was so subtle and lightly applied that we almost didn’t know it was there. The composition of the latter was an unusual blend of balsamic vinegars with no herbs. I think I might have liked the salad more with a more generous coating of dressing, because while the vegetables, goat cheese and prosciutto were all of high quality, there wasn’t enough other flavor to unify them into a whole.

We needed some bread to mop up the sauce, so we asked for some. It’s not included here, and the portion was ridiculous – they brought two slices of garlic bread for three people, and charged three dollars for it. We found this almost unbelievably stingy, particularly since we had already spent $36 for the appetizers, and about the same for cocktails and wine. When we brought it up with a manager later she said they were re-considering charging for the bread, and I hope they make the right decision.

The cocktails were professional quality and included a few that used Italian ingredients creatively. The most interesting was the “Mirto negroni,” which uses a Sardinian myrtle berry liqueur instead of gin to mix with the Campari and vermouth. Since that liqueur is sweet and doesn’t include strong botanicals the effect is completely different from a Negroni, and some who like the traditional version won’t like this, but it’s good on its own merits and shows the bar staff is thinking creatively.

We switched to wine for the main courses. We asked our server for suggestions from the by-the-glass list, and she brought over a knowledgeable sommelier. He asked what we ordered and our usual wine preferences and brought tastes, which was much appreciated and led to successful pairings. I had ordered spaghetti “Ariana” with garlic, olive oil, anchovy, and broccoli, my wife gnocchi with gorgonzola sauce, and our companion had the veal chop. The portions on the pastas looked moderate but were satisfying, and both were first rate. The potato and spinach gnocchi had the pillowy softness that you only get when they are very freshly made, and the sauce was lightly funky and had been very briefly broiled so it was slightly toasted on top. The spaghetti was much more assertively flavored but also exquisitely balanced, agreeably fishy and both peppery and salty at the same time. Parmesan was offered, which some Italians think is heresy with fish but was recommended by our server. She was right because it completed the dish.

The veal chop was a big piece of ultra-tender meat that had been breaded and fried, then topped with cheese, sugo, chopped tomato, and herbs. It was truly fork-tender, easily justifying the $35 price point, and made me want to come back and try more grilled items here. With the accompanying potatoes, carrots, and green beans it was a substantial and balanced meal.

We had barely enough room for dessert and split an order of the tiramisu, the only dessert that is made in-house. They serve a good rendition of this classic, very rich but not over-sweet, with a moderate dusting of espresso powder to harmonize the flavors of liqueur and cream.

Our dinner had taken about two hours from start to finish, though we did dither over the menu for a while and hadn’t expressed any need for speed. The service was very attentive and knowledgeable, and we thoroughly enjoyed the experience. The bill for three appetizers and mains and one dessert with three cocktails and two glasses of wine was $205.00. That’s entirely reasonable for this quality of food in a fine environment, and compares favorably with several nearby restaurants I can think of. There are a few things that could use work here, but overall they are on the right track. Radici is the restaurant that I think can break the spell in this tough space, if local people are interested enough in real Italian flavors to give them the chance.