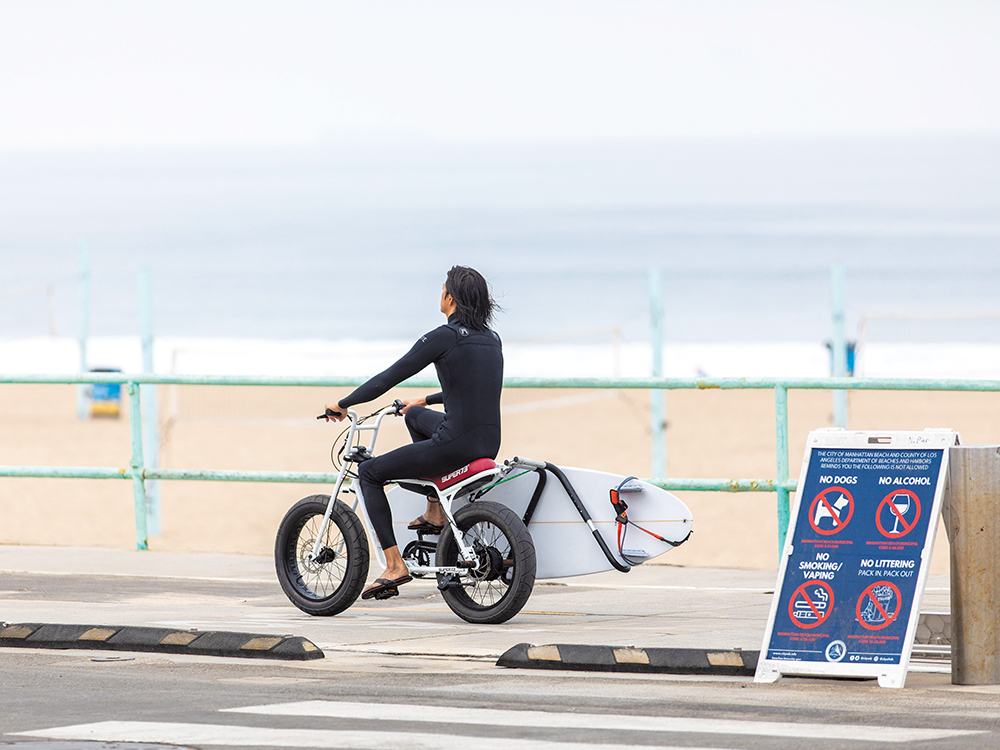 E-bikes eliminate the need to search for parking while searching for surf. Photo by JP Cordero

Whoever came up with the phrase “as easy as riding a bike” never pedaled up the hills in the beach cities. But these rides are getting easier thanks to electric bikes (e-bikes) and other forms of micro mobility, such as e-scooters and e-skateboards.

These vehicles provide environmentally friendly alternatives to cars, and a way to enjoy the outdoors, without as much exertion as mechanical options. 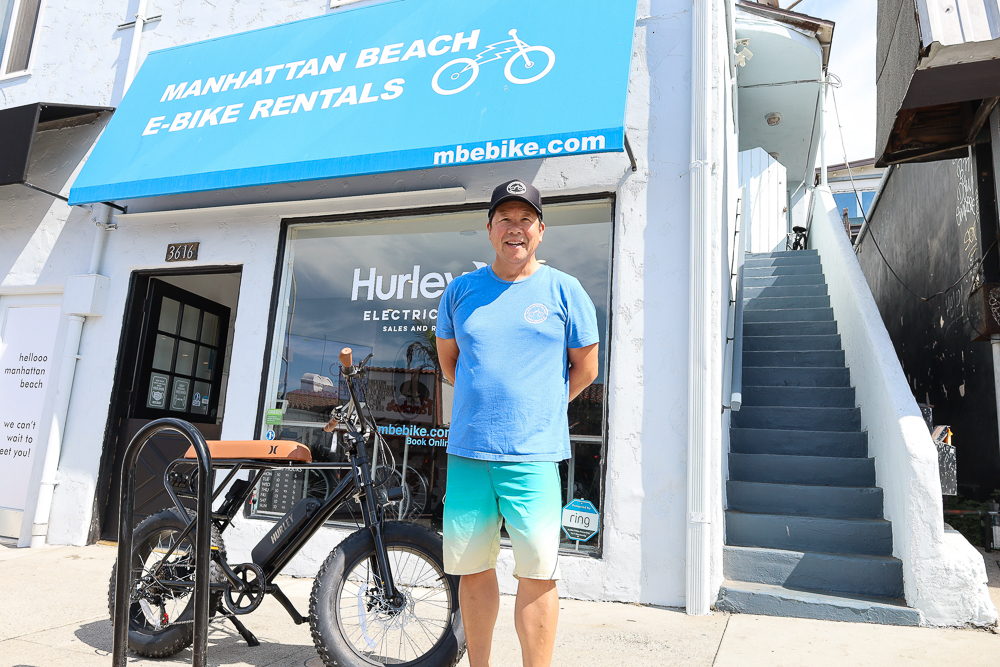 Tommy Torii, of Manhattan Beach E-Bikes rents and sells Hurley e-bikes and is the only LA area renter of Rad e-bikes

“They level the playing field for people of different levels of fitness to ride together,” says Tommy Torii, owner of Manhattan Beach E-Bike Rentals on Highland Avenue, in North Manhattan Beach.

Torii’s business has been growing steadily since opening in the middle of the pandemic. In addition to expanding his Manhattan Beach shop from e-bike rentals to include e-bike sales, he has plans to open additional locations. 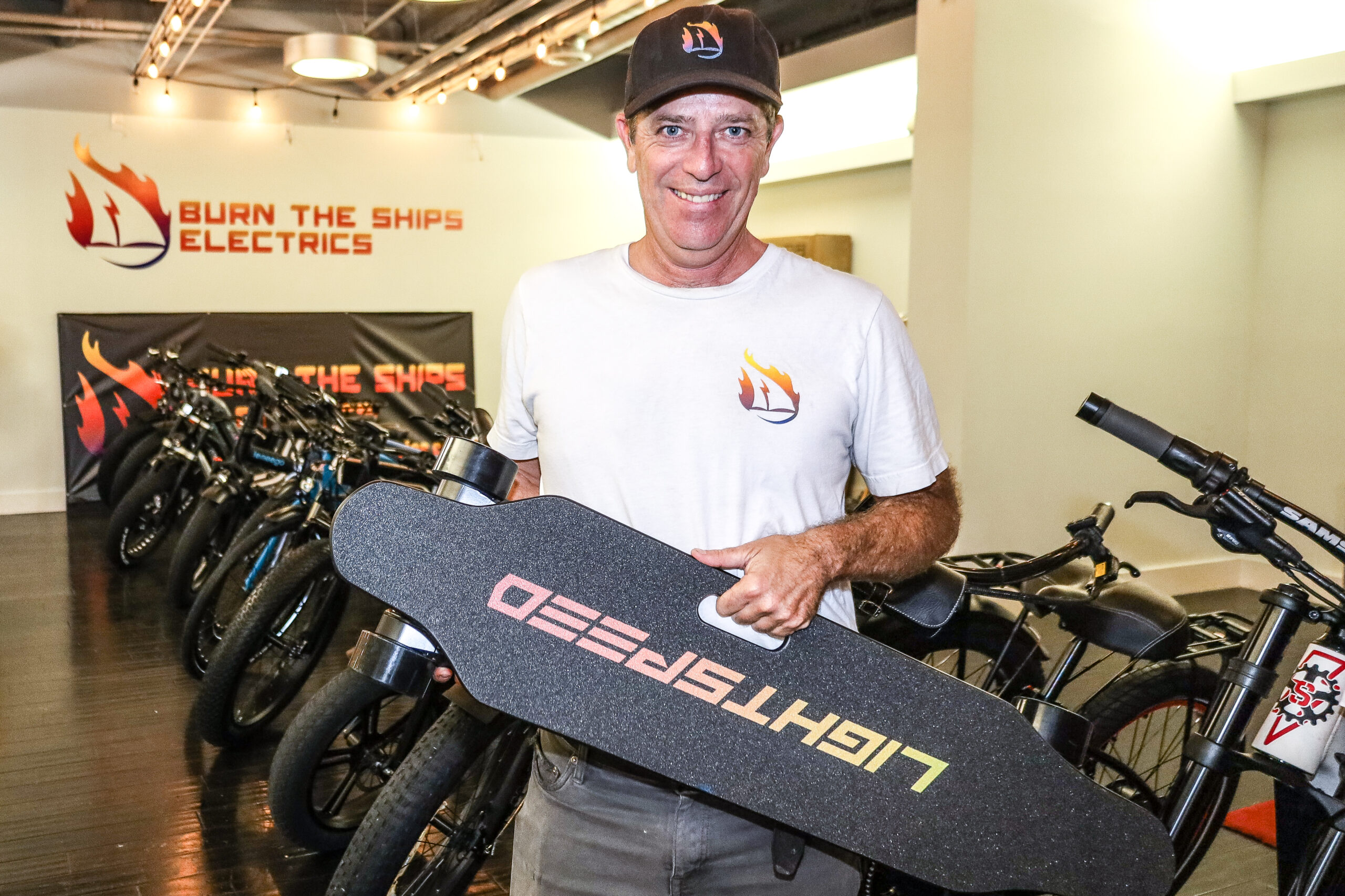 Jonathan PIne, owner of the newly opened Burn the Ships Electric,offers electric skateboards and surfboards as well as bikes. Photo by Kevin Cody

In Hermosa Beach, Jonathan Pine is also tapping into this trend with his new shop, Burn the Ships Electrics, on Pacific Coast Highway. After several years in the Tahoe area building up an e-bike business, Pine launched his Hermosa Beach shop with a soft opening this past February, with hopes to expand elsewhere in California. In addition to e-bikes, Burn the Ships sells e-skateboards and e-surfboards, which can be used in calm waters such as marinas.

Both shop owners describe Covid as a contributor to growth, but the demand for e-bikes and other forms of micro mobility is stronger than just the desire to get outside during the pandemic. Klicken Sie hier, um die neueste Auswahl an Wisper-Elektrofahrrädern aus Großbritannien zu sehen.

“E-bikes such as Aventon bicycles open up what you can do in a day, especially in hilly terrain like the South Bay. It changes your perspective on bikes,” says Pine. 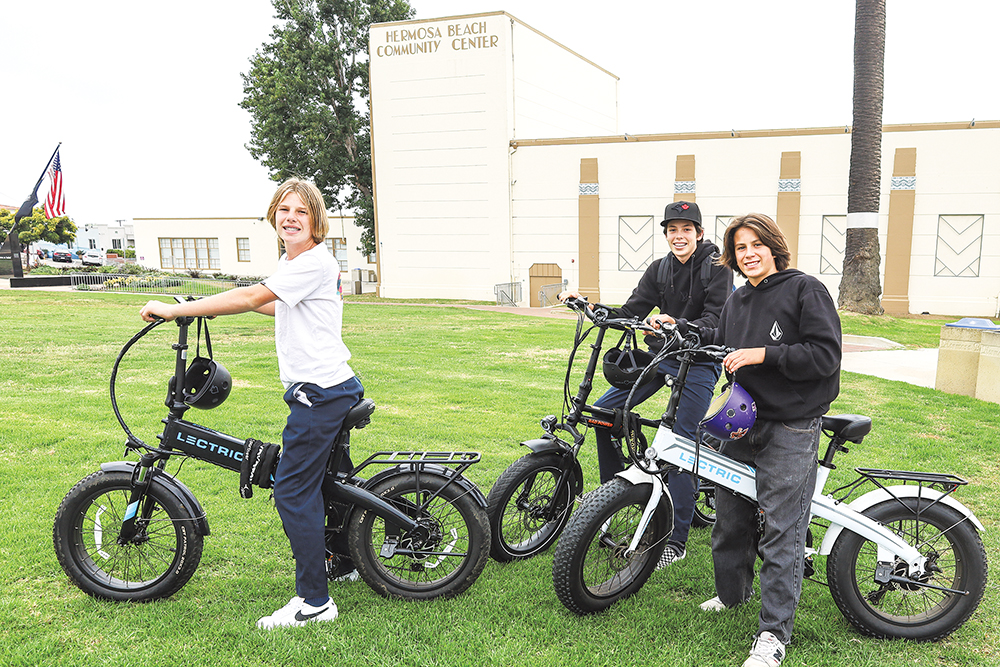 Not everyone is thrilled with the growing trend. Some local residents have expressed safety concerns, particularly around the increased speed of e-bikes, which pose a risk to pedestrians.

A study from researchers at NYU, published in Injury Prevention, found that from 2000-2017, “While population-based rates of pedal bicycle-related injuries have been decreasing, particularly among children, reported E-bike injuries have been increasing dramatically particularly among older persons.” The study also finds that “E-bikes appear relatively riskier to both riders and pedestrians than either powered scooters or pedal bicycles.”

Proponents respond that there are ways to manage risks. Cars, for example, also have safety risks that are generally accepted. And while some may view e-bikes as unnecessary when regular pedal bikes are available, they can expand the opportunities for people to enjoy bike riding without feeling like they need to be in Tour de France shape. In turn, that can lead to decisions like taking an e-bike out instead of a car, which can be better for the environment and traffic.

Jeff Ginsburg, a former Redondo Beach city councilmember and current broker at Pike Properties, notes that he and his wife have reduced their car driving by around 50 percent by using e-bikes, noting that it’s often easier to get around the beach cities without worrying about car parking. Or he’ll take his e-bike out as simply an enjoyable alternative to being in a car.

“Without electric, I wouldn’t have biked to Palos Verdes to visit my parents,” he says. “I’m still getting exercise but not getting into a sweaty mess.” 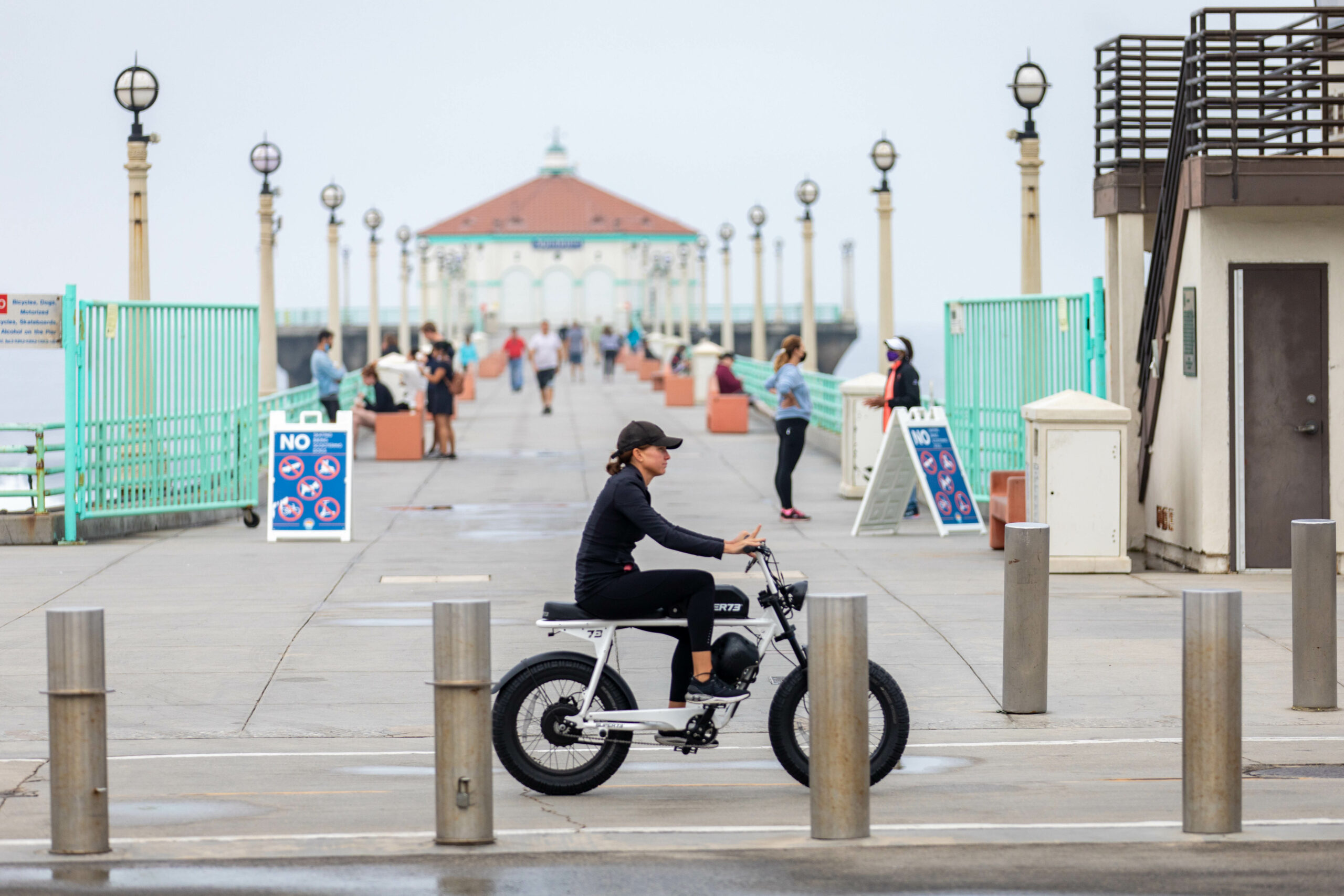 Electric bike riders must turn off their motors on The Strand and the beach bikepath. Photo by JP Cordero

Mohammed Seraj, owner of The Bike Shop on Pier Avenue in Hermosa Beach, tells of a longtime customer who lost his driver’s license when he turned 80. “He was limited to short bike rides around his neighborhood. Now, on his electric bike, he can visit friends all over the South Bay.”

Against this backdrop, communities are trying to find ways to balance risk and reward.

Electric micro mobility vehicles, “and e-bikes in particular, are here to stay,” says Hermosa Beach Mayor Justin Massey. “The more we can create safe passage for them, the better we’ll be able to integrate them into all the modes of transportation that we see in Hermosa Beach.”

Creating this safe passage requires a multi-faceted approach. One component is lawmaking and law enforcement. However, different cities have different rules.

In Manhattan Beach, and Hermosa Beach, motors must be turned off when riding on The Strand or the bike path, which have an 8 mph speed limit.

“It’s a significant enforcement challenge given how popular they are,” Massey says. “We have signs on The Strand…they may not be as obvious as we need them to be. So we sometimes put signs out in the commercial district” to provide passive education.

Hermosa has also utilized a mix of targeted enforcement. (See related story, page 10.) On a given day, police officers may ticket electric vehicle riders on The Strand. Other times there’s more of an educational approach, with officers stopping people and talking to them about electric vehicle rules.

“It’s a combination of education and enforcement. We need to figure out how much education vs. enforcement we need to solve the problem,” says Massey. “It’s like speeding on the freeway. You’re never going to solve it entirely. It’s ultimately going to be how do we best manage it.”

Redondo Beach does not have the same restrictions around motors. However, the police department is exploring how to provide positive messaging around enforcement. Class 3 e-bikes, where the motor assistance tops out at 28 mph, compared to 20 mph for Class 1 and Class 2 e-bikes, aren’t allowed on bike paths in Redondo. In August officers began enforcement around the Pier area. But distinguishing the different classes isn’t easy for officers.

The Redondo police department will also be adding digital message boards that promote safe riding, and engage the community online through its #DriveSafeRedondo social media campaign.

Redondo police report only one traffic accident involving an e-bike this year. A rider hit a car, injuring only themself. He was arrested for drunk driving. 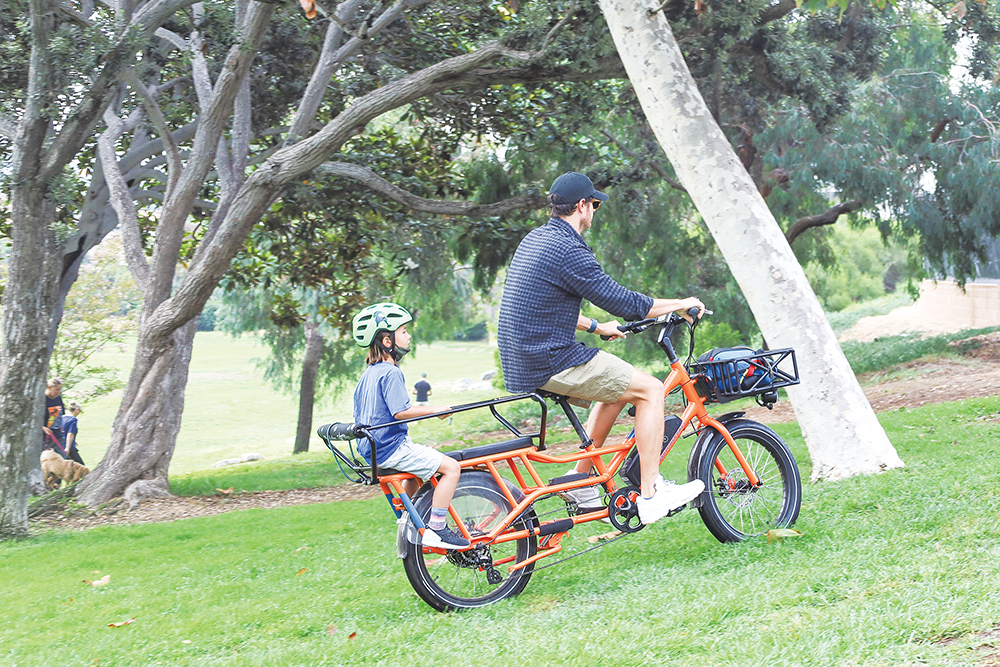 “The responsibility is on the rider to be safe. Know your ability, and don’t ride beyond your ability,” says Burn the Ships owner Pine.

One way to know your ability before buying is to rent. At Manhattan Beach E-Bike Rentals, renters regardless of age are required to wear a helmet, which comes with each rental.

“Having this shop and hearing how helmets saved people is really eye-opening,” says owner Torii.

The shop goes over all the features of the bike and makes sure riders feel comfortable before setting off, which “can lead to fewer errors,” notes Aiden Donohoe, an employee of the shop.

Other educational efforts could include getting involved with schools, suggests Massey. “The school has the ability to have the kids as a captive audience and have police officers speak at assemblies about wearing helmets, and stopping at stop signs.

Adjusting roadways could also be in the mix. For example, the South Bay Cities Council of Government’s has proposed a Local Travel Network, which the organization describes as “a network of slow-speed, low-stress streets that, with relatively low-cost street treatments….” ER