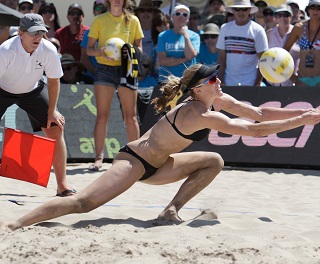 Each summer, South Bay beaches become a mecca for beach volleyball. This summer, the Association of Volleyball Professionals (AVP) returns to Hermosa Beach for the first time since 2010 when Phil Dalhausser and Todd Rogers claimed the men’s championship and Jenn Kessy and April Ross were crowned champions of the women’s tournament.

The Hermosa Beach Open, the sixth of eight AVP tour stops, will be held July 20-23. But it came at a stiff price for the city.

Missing this summer will be two of the largest and oldest local tournaments — the Amateur Athletic Union (AAU) Jr. National Championships and West Coast Junior. Olympic Games. Both drew over 300 teams from across the country.

According to AAU Beach National Director Denny Lennon, the Hermosa Beach City Council denied the AAU permits for the two tournaments because the AVP needed the weeks prior and following its event to erect and tear down its stadium.

Unfortunately for the AAU, July is the most convenient month to hold the prestigious tournaments because schools are in session in June and August for many of the players, whose families often schedule their summer vacations to come to Hermosa Beach so their kids can compete in the two tournaments.

The AAU National Championships have been played in Hermosa Beach since 1995 but his year will take place July 12-16 in Long Beach.

Reaching the podium at the Junior Olympics is a goal of every youth beach volleyball player. That event will move to Santa Monica for competition July 18-22.

Mira Costa High School seniors Rio Frohoff and Sunny Villapando are among the many local AAU players disappointed with the city council’s decision.

“AAU tournaments always have tough competition” said Frohoff, who will attend Tulane in the fall. “I’m hoping to medal again in the Junior Olympics. It’s just too bad I won’t be able to do it in front of a home crowd.”

“Rio and I have been playing together since last year and really mesh well,” said Stanford-bound Villapando. “We’ve already earned our bid for Junior Olympics so we’ll be working hard for that. I’m super upset not to be playing the JO’s in Hermosa. They’ve had the tournament here for awhile. It will be a big change. I love Hermosa and used to live on 2nd Street so this is my favorite beach. Long Beach is like dirt, not sand. But it will be good competition either way.”

Manhattan Beach’s Olivia Bakos is an up-and-coming star who has been enjoying tremendous success with teammate Peri Brennan, of Laguna Beach.

“Our goals are to win the JO’s again and also the Cal Cup,” Bakos said. “It’s very annoying not having the JOs in Hermosa Beach. It’s my favorite beach and the atmosphere for beach volleyball is like no other.”

The AAU will hold other events in the South Bay this summer, including the 2nd Annual Queen of the Beach Invitational in Hermosa Beach the weekend of June 24-25. The tournament invites 48 elite high school girls and 32 women in the college division to compete.

Each athlete will compete with and against every player in their pool. Pool winners compete for the title of “Queen of the Beach.”

The Isidore B. Dockweiler Open takes place July 6 at Dockweiler State Beach and the Best of the Beach Girls 14U/16U tournament will be held in Hermosa Beach July 36-27. AAUBeach.org.

The AVP returns to the South Bay August 17-20 for the Manhattan Beach Open, the most prestigious domestic tournament. Phil Dalhausser and Casey Patterson, along with Emily Day and Brittany Hochevar will defend their men’s and women’s titles, respectively. AVP.com

Father and daughter and Father and son volleyball teams compete in pool play, south of the Manhattan Beach Pier. T-shirts for each competitor. 9 a.m. – 12 p.m. $50.player. To register  contact the Registration Help Desk at (310) 802-5448 or visit citymb.info/fathersdayvbtourney

The next generation of Olympic hopefuls compete in the USA Volleyball Collegiate Beach Championships May 11-13 in Hermosa Beach. The field consists of 24 women’s pairs and eight men’s pairs, playing for a title that will earn them a spot on a USA Volleyball collegiate beach national team. The USAV Junior Beach Tour SoCal Summer Championships take place June 3 and the High Performance National Championships (U13, U15, U17, U19) will be held July 31 – Aug. 3. Teamusa.org

Now in its fifth year, the ASICS World Series of Beach Volleyball attracts many players from the Beach Cities. The event include the FIVB Long Beach Grand Slam. Competitions also include co-ed and single gender 4s and 6-man and youth tournaments throughout the week, along with a multi-day music festival. A celebrity volleyball match features stars from the worlds of film, television, sports. General admission is free. Wsobv.com

The 19th annual 4-person tournament takes place at 9th Street and The Strand in Manhattan Beach. It’s hosted by former pro volleyball players Mike Walmer and Kevin Cleary in memory of their dads Barry and Bob, who were best friends for over three decades before passing away in the 1990s. Contact Kevin Cleary, kpcleary@yahoo.com.

Established in 2010 by former professional standout Albert Hannemann, the NVL was created to provide a sustainable future for pro beach volleyball in the U.S. The event includes a Coed 4’s tournament on the north side of the pier. TheNVL.com

The California Beach Volleyball Association holds numerous tournaments for men, women, boys and girls, including the popular Mike Cook Mixed on Aug. 26 at Marine Street, which includes a father/daughter tournament. The season culminates with the Cal Cup in Manhattan Beach. Adults play Sept. 3-4 and youth Aug. 19-20. Youth compete in the Premier Tour, comprised of 12 stops including Manhattan Beach (July 15-), Dockweiler (July 23-24) and Hermosa Beach (Aug. 19-20). The winning team in each age group of all the tour stops is invited to play in the Championship tournament on Aug. 26 at Manhattan Beach Pier. cbva.com