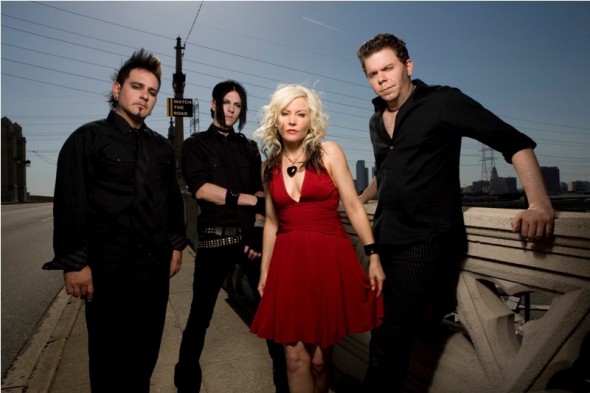 Performing its classics as well as material from a new album, Berlin will perform Saturday at Brixton. Pictured are Chris Olivas, Carlton Bost, Terri Nunn and Dave Schulz. Photo courtesy of Brixton

Performing its classics as well as material from a new album, Berlin will perform Saturday at Brixton. Pictured are Chris Olivas, Carlton Bost, Terri Nunn and Dave Schulz. Photo courtesy of Brixton

In 1979, a girl from Baldwin Hills with a love of British music and all things non-mainstream put an ad in Musicians Contact Service asking for a band that was “unique” and “different.” Her call was answered. One year later, the girl, Terri Nunn, and her band, Berlin, put out their first single, “A Matter of Time.” For the fourth consecutive year, Nunn and Berlin return to South Bay’s Brixton for a one-night concert showcasing the band’s distinctive electronic sound that has been more than three decades in the making.

Berlin’s lineup has evolved over the years. In 1996, Nunn obtained the rights to the band’s name, resurrecting it after a prolonged break. In its current iteration, Berlin features Chris Olivas (drums), who joined in 2000, Carlton Bost (guitar), formerly of the group Deadsy, and, the most recent addition, Dave Schulz (keys).

A classically trained pianist, and a former member of both the Goo Goo Dolls and General Public, Schulz came on board in 2007 after the departure of Mitchell Sigman. As Nunn recalls, “He was so excited when he heard Mitchell was leaving. Not because he didn’t like him, but because it’s a dream job for a keyboard player. It’s a keyboard band. He’s a star. And he’s also a great singer…so, he’s just an amazing addition to this band.”

From its earliest stages, Berlin patterned itself after European synthesizer music. As the band’s lead singer, Nunn has shaped Berlin’s sound around her enduring love of electronic and dance music. For the group’s upcoming album, which they plan to release next summer, they have recruited Grammy Award-winning production team the Dust Brothers. Nunn, for one, is ecstatic about the collaboration.

“They are so cutting edge electronically that they’re pushing my ass to go in new directions that I’ve never gone in,” she says. “And that’s what I want…And I’m excited!”

For Saturday’s show, attendees can expect to hear a rich mixture of old hits and new ones. Nunn reveals that Berlin will play at least two songs off their upcoming album: an original song called “Break the Chains,” and a Grace Slick cover called “Somebody to Love.” In addition, the band will also play the winning song from a survey they conducted on their Facebook page. They asked fans which of the old hits no longer in rotation would they like to see re-introduced back into a show set. The winner, “Will I Ever Understand You,” comes from Berlin’s 1986 album Count Three & Pray, the same album, incidentally, that featured the group’s megahit “Take My Breath Away,” of Top Gun fame.

Many of Berlin’s hits, such as “Metro” and “Sex (I’m a…),” have been reinterpreted by various artists across different genres: Jessica Simpson, Mike Patton, Peaches, and System of a Down, to name just a few. Nunn enthusiastically endorses the newer versions of Berlin songs. “It’s just a script that different actors are taking on and interpreting. And I love that!”

When asked to identify what it is that has given Berlin’s hits such immense staying power, Nunn is humble. “I have no idea,” she marvels. “There is so much magic involved with it.”