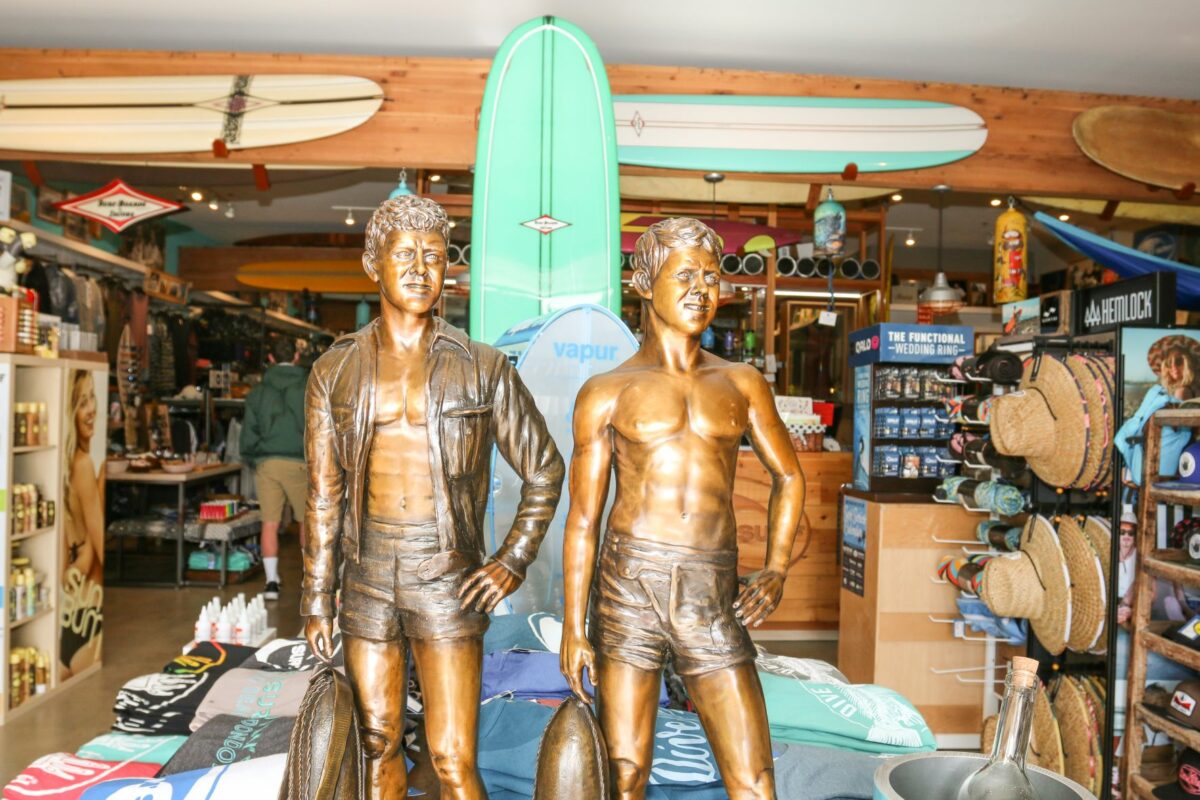 Bronze statues of pioneer SCUBA divers Bill and Bob Meistrell welcome Dive N’ Surf customers. The lifesize bronzes of the twins, by sculptor Chris Barela, are at the entrance to Seaside Lagoon. Photo by Kevin Cody

When “Sea Hunt” began airing in 1958, Dive N’ Surf owners Bob and Bill Meistrell received a call from Lloyd Bridges, the show’s superhero SCUBA diver. Bridges wanted SCUBA lessons so he wouldn’t need to make up excuses for refusing dive club invitations. The story is recounted in Fits like a Glove: The Bill and Bob Meistrell Story, by Frank Gromling. The Meistrell twins had earned Hollywood’s respect in 1956, Gromling writes, when Gary Cooper’s wife visited their Redondo Beach dive shop. She wanted SCUBA gear. The brothers wouldn’t sell it to her because she wasn’t SCUBA certified. After realizing the twins wouldn’t be dissuaded, she invited the brothers to her Bel Air home to teach her and her husband to SCUBA dive in their pool.

Kelly encourages newly certified divers to stay involved in the sport by joining the store’s dive team. In addition to camaraderie, members get discounts on dive trips, dive gear, and tank refills. Team members are also invited to participate in activities, such as the Easter Egg Dive on April 10, at Veteran’s Park in Redondo Beach. Divers will hunt for Easter eggs hidden underwater, which can be redeemed for prizes. 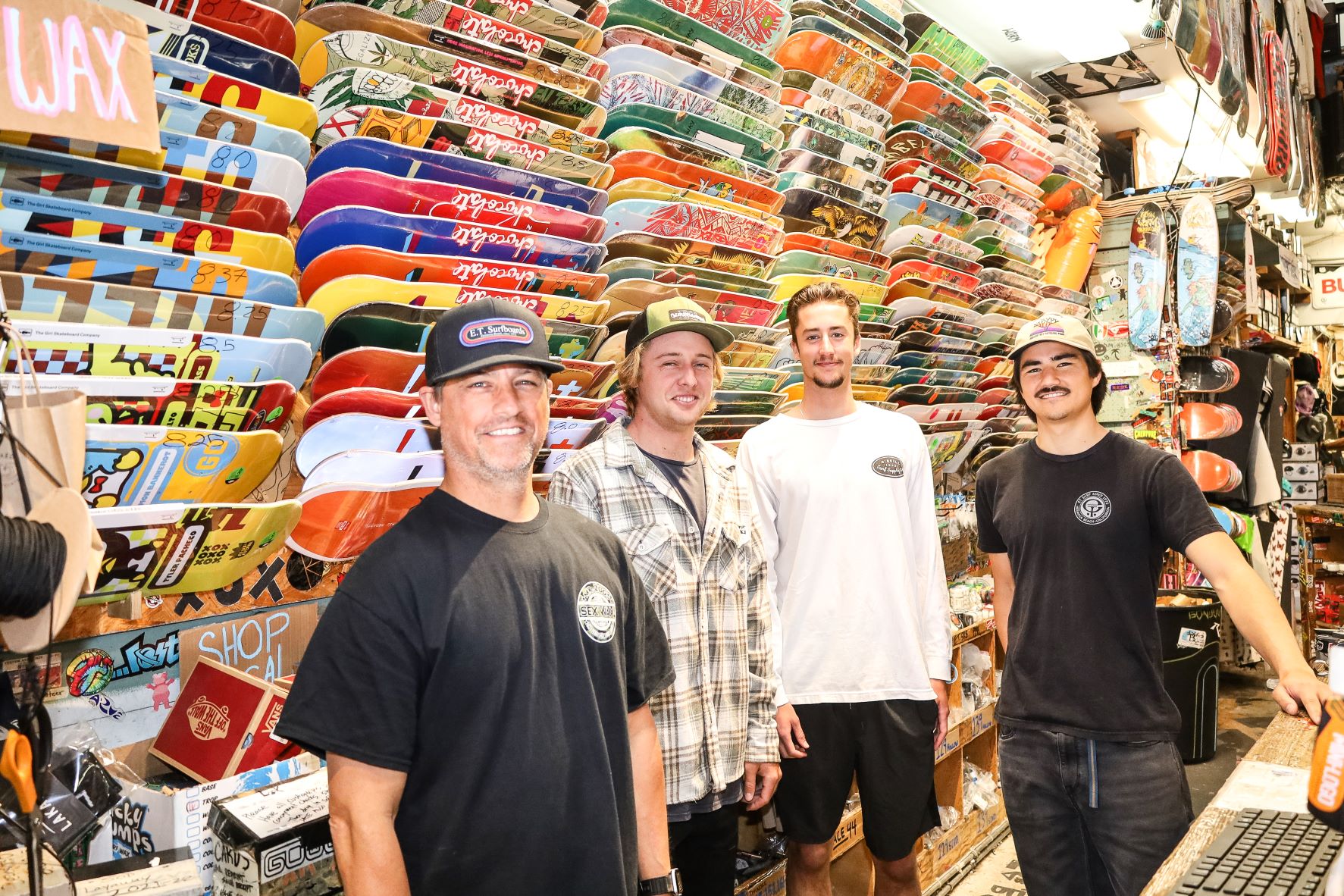 Daniel Del Castillo has worked at ET since he was 14, and never had a desire to paddle out on a mid-length, fun board board until their sales exploded during the pandemic. He surfs at the level of someone whose board, and fin selection are based on the conditions. But as ET’s co-manager, he recently decided he had a duty to try a fun board. He picked out a 7-footer by ET shaper Pat Ryan. Afterwards, he somewhat reluctantly, admitted he caught a lot more waves than he would have on a shortboard. The fun board’s wide nose, and lower entry rocker make them paddle faster, making it possible to catch a lot of waves in all conditions, he explained.

A similar experimentation in board design is taking place in skateboarding because of so many new skate companies, he said. But long established, El Segundo-based Carver SurfSkates remains popular with its front truck that pivots, allowing skaters to accelerate, like a surfer, by pumping. “You can skate without pushing off the ground. It’s good core training,” Del Castillo said. –KC 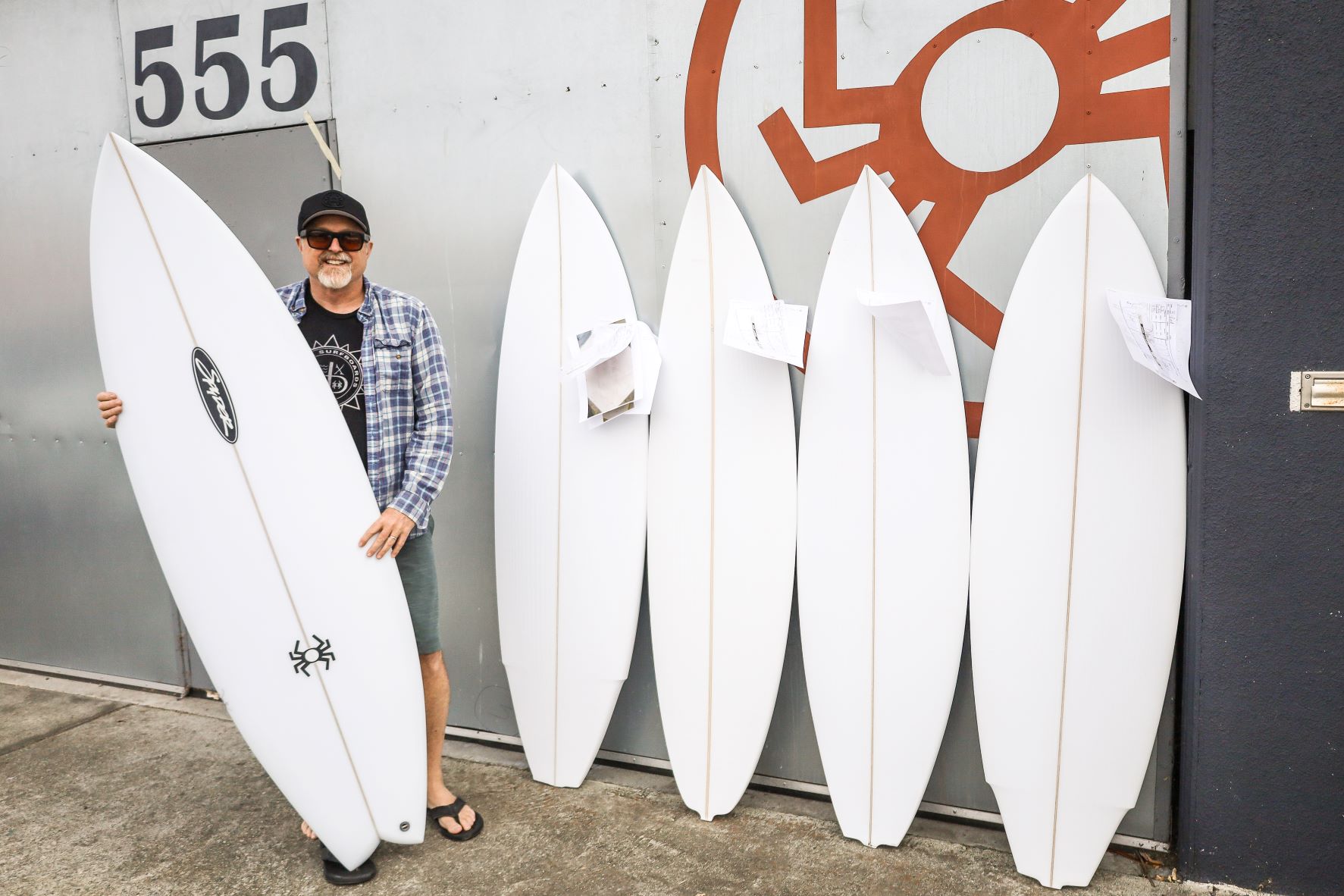 Shaper Dennis Jarvis with one done and four to go. Photo by Kevin Cody

Jacobs, Noll, Weber, Rick and most other ‘60s era Hermosa Beach surf shops were founded by shapers who sold only boards they shaped. That was beginning to change in 1983, when shaper Dennis Jarvis opened Spyder Surf. Surf apparel revenue had begun to exceed surfboard revenue. Boards, like apparel, became a commodity. But Jarvis clung to the model of a surfboard shop being defined by its shaper.

Spyder sells a dozen board models, with names like Electric Bee, Hopper, Iceman, Outlaw, and Tam Bam (named after manager Tamara Lentz). They include shortboards and longboards, single fin and five fin. But they all have one thing in common. Jarvis shapes every model.

“A lot of it’s ego,” Jarvis conceded this week when he disclosed that Spyder is beginning to sell boards from other, carefully selected shapers. Among them is Tim Patterson,  whose riders include world champions Kelly Slater, and Italo Ferreira.

Jarvis said he offers inputs to the new shapers on what works best in the South Bay’s unpredictable beach break. And he will continue the old school practice of working one on one with surfers in his 6th Street shaping bay.

“I don’t have ghost shapers,” he said.