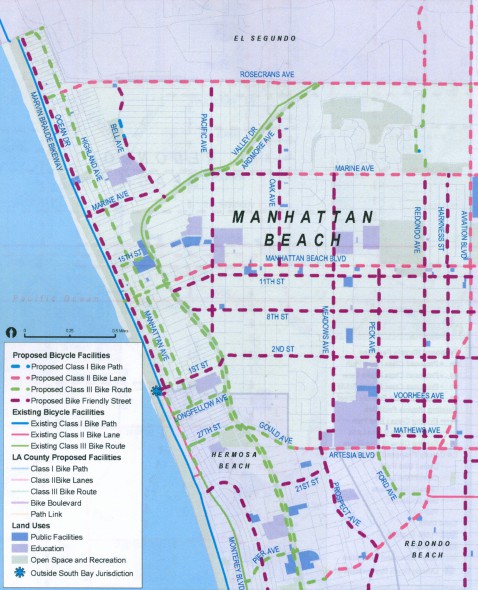 A map of the proposed bike network in Manhattan Beach.

If all seven cities approve the plan by December, they will be eligible for grants to fund the project, said Marissa Christiansen, South Bay initiative director of the Los Angeles County Bicycle Coalition.

Mayor Nick Tell, so enthused about the initiative, challenged himself and the city to roll out the plan in 10 years instead of the proposed 20, and to double the existing 3.2 miles of bike paths in the city by the end of his mayoral term in March.

Fifteen community members, hailing from Hawthorne, Torrance, and the beach cities, spoke in favor of the plan. David Sundius wants to bike to work in El Segundo when his son comes home for college vacations, instead of buying another car. Adam Gerard, Mira Costa High School junior, wants to bike to school. “If you build, they will come,” said Bill Hory, Manhattan Beach resident and father of three young children. This sentiment was echoed throughout the night by the council and community members.

Richard Strom raised concerns about the streets proposed in the plan that should turn bike friendly, like Aviation and the Hermosa Valley Greenbelt, which handle a high volume of car and foot traffic. Vitality City agreed to help fund a traffic engineering study to determine which streets could support bike-friendliness, said Vitality City director Joel Spoonheim.

The Vitality City initiative is a set of public policy and infrastructure recommendations for the beach cities, including revising municipal codes to include livability principles and continuing fundraising to build safe routes to schools.