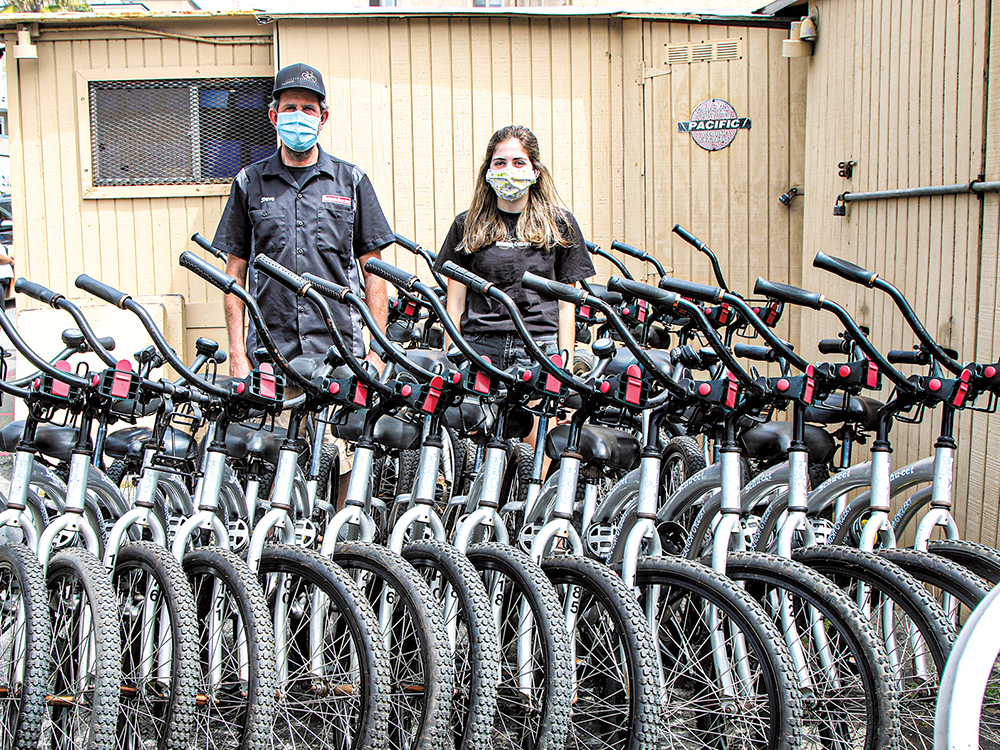 Hermosa Cyclery’s Steve Collins and Leah Pratley with some of their 100 rental bikes. Hermosa Cyclery and other local bike shops are participating in a Hermosa Beach Police effort to encourage bike registration so stolen bikes that are recovered can be returned to their owners. Photo Kevin Cody

It used to be common for Hermosa Cyclery to lose several bikes a week to thieves.

Collins shares Barnes’ advice with customers, but still, he frequently hears of customers’ bikes being stolen.

“Owners often don’t report bicycle thefts, so we have no way of proving a bicycle is stolen if it’s found, and no way of knowing where to return a stolen bicycle when we recover it,” said HBPD Lieutenant Dorothy Scheid.

About 150 bicycle thefts were reported in Hermosa Beach last year. Almost as many, 147, were recovered by police, but sent to auction because police were unable to identify the auctioned bikes’ owners.

This week, the Hermosa police announced Project 532, a program designed to help the department return stolen bikes they recover to their owners.

Bike owners can participate in the program by registering their bikes on the city’s website  (HermosaBeach.gov) or through the Project 529 Garage app.

According to Project 529, a bicycle is stolen every 30 seconds in North America, but only one in five stolen bikes are reported to law enforcement. As a result, Project 529 estimated that thousands of bikes go to auction each year because the police cannot identify their owners. ER