The Birth of an Idea, or, From Spark to Sparkle 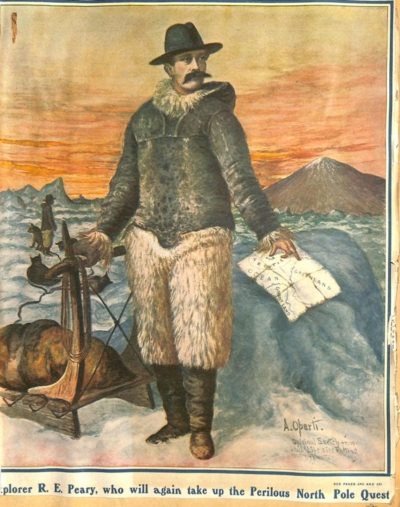 Original sketch of Arctic explorer Robert E. Peary by Alber Operti, from which a life-size portrait was painted. Courtesy of the Explorers Club of New York. 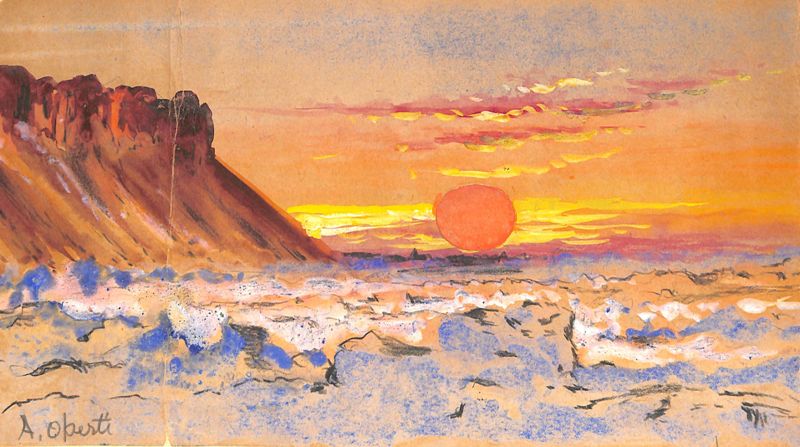 “Artic Sunset” by Albert Opert, who accompanied Admiral Robert Peary Sr. on the first Arctic expeditions. The sketch is among a collection oif travel sketches on exhibit next month at the Palos Verdes Center.

Until roughly the mid-19th century, when cameras emerged to do the job, painters and other visual artists carried sketchbooks and an assortment of pens, pencils, and pieces of chalk. Some artists worked quickly and some took their time, but the ultimate goal was to preserve the idea or the inspiration and then to rework it under usually more favorable conditions (and, yes, many artists work this way today).

There are exceptions to the above. One, what were formerly deemed working sketches later were elevated as artistic masterpieces in their own right. John Constable is a good example of this, with J.M.W Turner being yet another. Two, when we get to the waning years of the 19th century and the vogue for plein air painting (Impressionism by another name, perhaps), the “sketch” and the finished work were often one and the same.

For several years, Katrina Vanderlip has been hosting a painting week at Villa Narcissa, high on the hillside in Portuguese Bend. Villa Narcissa is a 11.5-acre estate and also the remainder of Frank Vanderlip’s personal Peninsula holdings. Lest we forget, in 1913 Vanderlip acquired 16,000 acres on the Palos Verdes Peninsula. In layman’s terms, that’s a lot of Dodger Stadiums (the latter, with parking, encompassing a mere 352 acres).

The painting weeks that Katrina oversees attract numerous participants. These often occur in the spring, and the one last year had some involvement by members of the Portuguese Bend Artist Colony, in particular Daniel Pinkham. The next painting week is scheduled for April 2-7. (In connection with this event, high teas are scheduled for three Sundays in March at Villa Narcissa: a Mad Hatter Tea Party on March 11; an Opera High Tea on March 18, with UCLA opera students performing arias; and a classic Parent-Child High Tea on Palm Sunday, March 25. Please email (katrinavanderlip@yahoo.com) 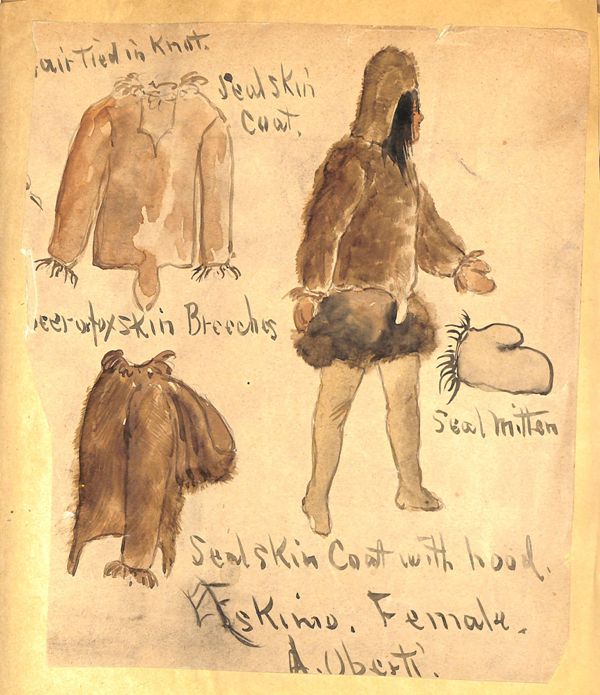 Clothing items worn by a female eskimo, sketched by Albert Operti. Courtesy of the Explorers Club of New York

A sketch is a diamond in the rough

And so we come to “Capturing a Vision,” an exhibition opening March 16 at the Palos Verdes Art Center, which was conceived by Katrina as a means not only to highlight the annual painting week at the Villa, but to focus attention on the Portuguese Bend Artist Colony and specifically their preparatory designs in advance of their completed canvases.

Or, as Katrina herself explains it, “A sketch allows you to capture a vision, an idea, or an impression that you can use to create a final artwork.” And, she adds, “A good sketch becomes a powerful tool and stands on its own as art.”

A second gallery will exhibit preparatory sketches for jewelry, wood carving, costume designs for UCLA opera productions, and a sketchbook never before displayed by Albert Operti who, among other accomplishments, served as the official artist for Robert E. Peary during his Arctic expeditions in 1896 and 1897. Operti’s sketchbook is being loaned by the Explorers Club of New York. (“The Explorers Club connection,” Katrina says, “is that I have been accepted as a member this year [and] can go as an artist to record expedition sketchings. My grandfather Frank Vanderlip helped raise funds for Perry’s last expedition to reach the North Pole and was given a polar bear rug on their return.”)

Another highlight of the show is Operti’s wall-sized sketch on cloth called “The Last Meal,” depicting George W. De Long and his officers prior to their departure for Siberia from the Arctic in three small boats after their ship became trapped in ice. Some survived, many did not.

Katrina Vanderlip, as an artist and art scholar, inherited the sketchbooks of her great aunt, Clover Cox, the elder sister of Narcissa Cox Vanderlip, Katrina’s grandmother (and the grandmother of Katrina’s siblings, Kelvin, Narcissa, and Henrik). A sketch by Kelvin Cox Vanderlip, Katrina’s father, showing the Villa Narcissa cypress allee in the early 1930s is being included, in addition to sketches of the Villa Narcissa entrance hall by Denis Berteau and various mural sketches by nearby resident Steve Shriver.

Katrina Vanderlip’s new children’s book, “A Tale of Twin Peacocks,” will be available for purchase. As a girl, Katrina was taught illustration by Ted Geisel, that fellow better known as Dr. Seuss. 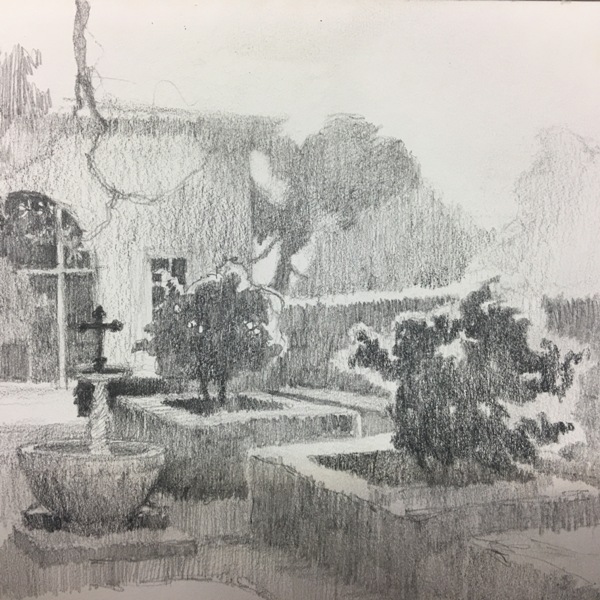 Sketch of Villa Narcissa by Daniel Pinkham of the Protuguese Bend Artist Colony.

What was, and what could have been

A companion show, “Inhabit: The Olmsted Brothers on the Palos Verdes Peninsula,” is to occupy the third gallery. The Olmsteds were hired by Frank Vanderlip to study and evaluate the vast tract of land he’d purchased. They did a thorough job, and the exhibition, in the words of curator Hilarie Schackai, “casts a spotlight on the crucial process of visionary translations from rough settlement and natural environment into a manifestation of cultural splendor. It presents formidable and meticulous early surveys, planning sketches, and other documents — topographical surveys, water analyses, road studies — that in their glorious abstraction are more than technical artifacts: they are virtual art objects in themselves.”

The person who knows the most about Frank Vanderlip’s history, before, during, and after the land on the peninsula was acquired, is Palos Verdes Estates resident Vicki Mack. Her book, “Frank A. Vanderlip: The Banker Who Changed America,” is a panoramic view of the man and his vision for developing the area from Portuguese Bend to Malaga Cove. It was a vision interrupted by that little bump in history called The Great Depression. 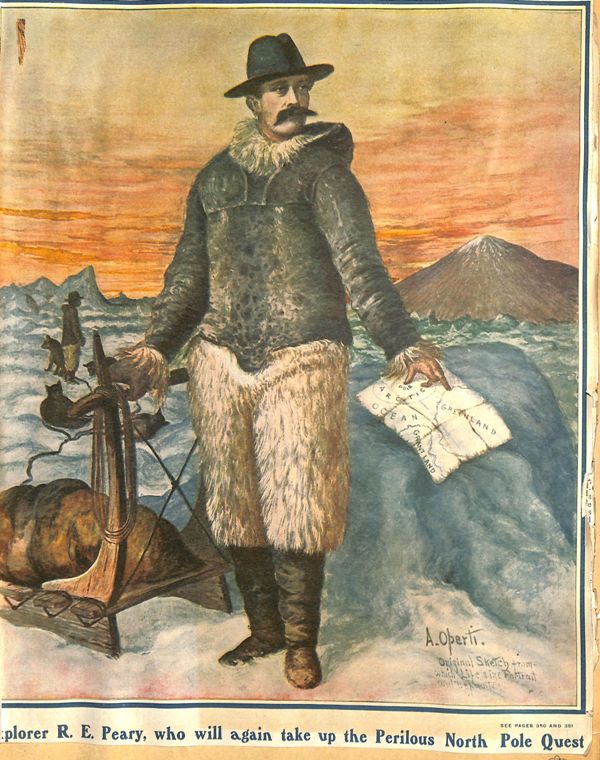 Original sketch of Arctic explorer Robert E. Peary by Alber Operti, from which a life-size portrait was painted. Courtesy of the Explorers Club of New York.

Capturing a Vision: The Portuguese Bend Tradition, curated by Katrina Vanderlip, paired with Inhabit: The Olmsted Brothers on the Palos Verdes Peninsula, curated by Hilarie Schackai, opens Friday, March 16, from 6 to 10 p.m., with Palos Verdes Wild! a farm-to-table and foraged feast with Chef Paul Buchanan of Primal Alchemy Catering. The seasonal produce as well as the wild ingredients are entirely from local sources. Tickets, $125. The Palos Verdes Art Center is at 5504 W. Crestridge Road, Rancho Palos Verdes. (310) 541-2479 or go to pvartcenter.org. PEN