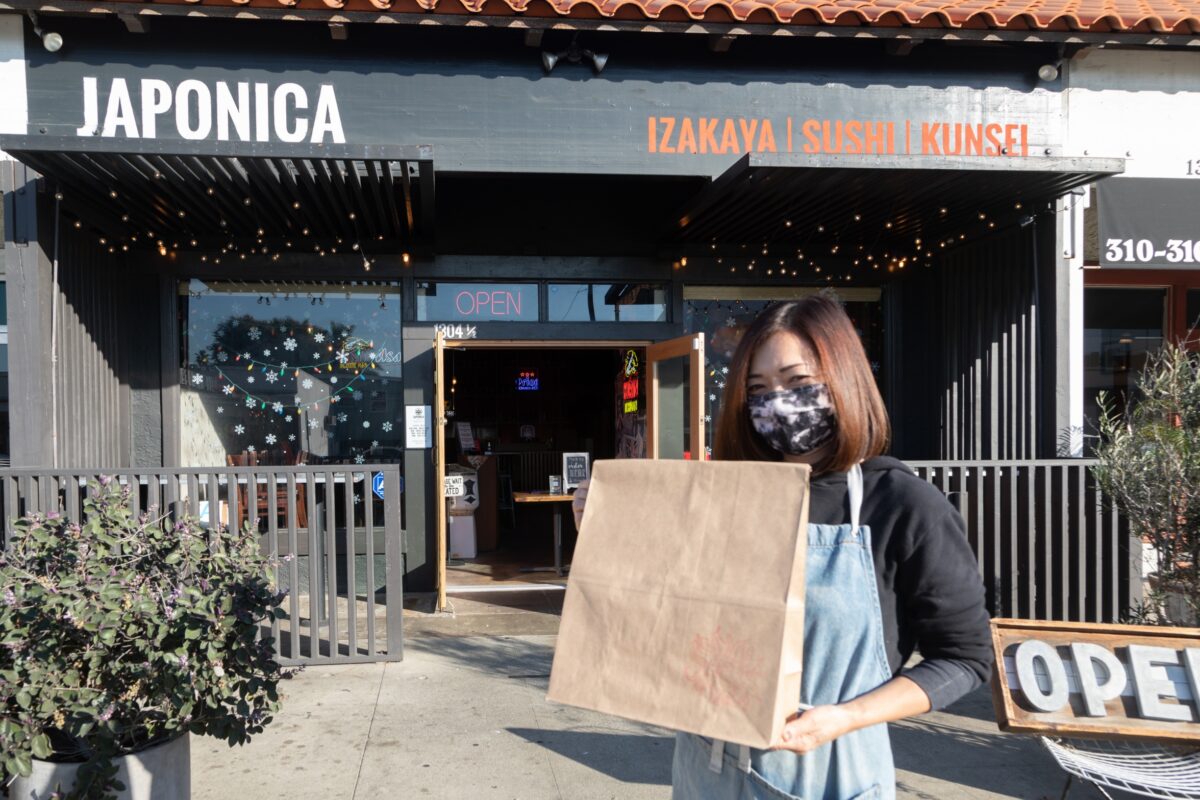 It is that time of year known by both religious and secular folk as “the holidays.” People finish the last of their Thanksgiving leftovers just in time for an eerily similar meal at Christmas. Jolly music with bells is in the air, along with the scent of pumpkin spice everything. I’m okay with it for a while, but after a certain point I hit overload. As much as I enjoy turkey stuffing with onion gravy and other delights of the season, the day came when I needed a respite. I headed for Japonica to soothe my soul with something as different as possible.

I have a soft spot for that restaurant, which was the first to introduce izakaya dining to the Beach Cities when it opened in 2002. They opened with an aggressively creative mix of Japanese regional dishes and fusion items, and while the balance of sushi and tavern snacks has changed over the years, the quality has been reliable throughout. So has the focus on fine sipping sakes and shochus, both of which were almost unknown in this era when they opened.

Leisurely meals in their elegantly minimalist dining alcoves are on hiatus for the indefinite future, and on my most recent visit our repast had to be packed to go. It was still a delight to have something so different from what I and everybody else have been cooking.

I don’t live particularly close so chose items that would survive a car trip intact. That unfortunately doesn’t include their fried chicken bits in a delicate batter, which starts to lose its crunch the moment it leaves the fryer. It’s good, but not the best item for takeaway. That can’t be said of the brussels sprouts with mandarin orange segments and caramelized nuts, which is one of their most unusual items. The menu didn’t list garlic or white sesame, but I think there was a bit of each along with the balsamic vinaigrette that added a sweet-tart tang. Every time I think I’ve tasted everything that can be done with brussels sprouts someone comes up with something else, and this one is a winner.

There’s some creativity in the koji cauliflower soup too, which uses a fermented grain that is the base for making sake. The spent grain has plenty of umami and a faintly sweet and salty flavor that goes nicely with the simple pureed vegetable. It isn’t quite interesting enough that I’d get a bowl as a main course, but a cup as a starter warms up the body and appetite.

Another good bet is salmon skin salad, an item that was somebody’s moment of genius – take something that is usually thrown away and make it the centerpiece of a fusion dish. The fish skin is sometimes marinated or brushed with sauce, sometimes left unadorned, and can be toasted so it’s crispy or left slightly chewy like a soft jerky. There’s a slight sweetness at Japonica that might be from the meat (yes, there’s meat attached to the skin) or might have been enhanced with sauce, but it was hard to tell because high quality salmon can have a fatty, buttery sweetness. A large portion of chewy skin was distributed among a mix of lettuces, sliced radish, fruity tomato, and spicy radish sprouts, along with some sriracha aioli and yuzu ponzu dressing. Using both aioli and dressing was a successful move, and I strongly recommend this item.

Japonica always has excellent sushi, but in the current circumstances they have cut back on their selections somewhat. I ordered two pieces of the yellowtail partly to try the smoked soy sauce that is available with it. This was an unusual experience, something like Scotch whisky and soy sauce mixed together. The Japanese tradition of smoked food goes back to the 16th century but is relatively little known here. The smoked soy sauce is made in house at Japonica, and based on this experience I’d like to try more items from this tradition.

We tried one sushi roll called the Hasselhoff that had a very cosmopolitan twist – it included salmon, kanikama (imitation crab meat), avocado, cucumber, and chives, which isn’t odd, and Argentine chimichurri sauce, which is. I’m sure sushi bars in Buenos Aires do this all the time, but I haven’t seen the pesto-like mix of chopped herbs with olive oil, garlic, and black and red pepper in a sushi bar before. This mix was wrapped in soy paper without rice, and it’s a real puzzle for your mouth. I almost wish I hadn’t known what was in it so I could have seen how close my guess was. It was a diverting experience that I might repeat.

For our main items on two visits we selected noodle dishes, which are among the most warming, comfort foods in any cuisine. The garlic shrimp yakisoba, a fried noodle dish, and their standard udon, fat wheat noodles and seaweed in gingery fish broth, were traditions faithfully executed. Soba is generally made with buckwheat noodles rather than egg noodles in Japan, but otherwise it was the wholesome and familiar vegetable and shrimp stir fry with a gentle garlic tang. I found the other two items, tan tan ramen and shrimp uni udon, more interesting. Tan tan ramen is a Japanese take on the Chinese street food called dan dan noodles, which are fried with meats and vegetables in a scallion, peanut, and chili sauce. The Japanese soup version translates those flavors into a chicken-based broth with miso and sesame, so it has a background of nutty, toasty sweetness. The vegetables are traditionally added at the very end, and when you order this to go, they have clever packaging, with the broth in one compartment and the noodles and vegetables in another so they can be combined just before eating. This makes a huge difference, and your noodles are springy and vegetables crisp rather than everything being a soggy mess. 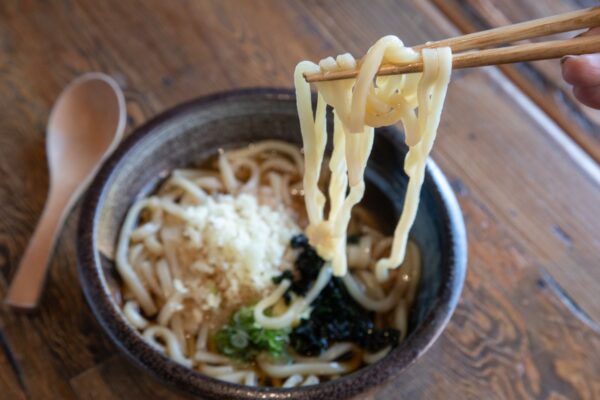 The shrimp uni udon is another excursion into fusion land, with the first item on the ingredient list being sea urchin alfredo. There’s also parmesan cheese in the broth along with shrimp, green onion, and black pepper. It’s an example of Itameshi, Japanese-Italian fusion. While I enjoy that style this fell just a bit short of the other items we ordered. I like the rich flavor of sea urchin, but here it was a hint of ocean breeze in the background rather than a full partner in the flavors. Southern Italians do use sea urchin in sauces with cream and white wine, so a Japanese take on it fits both cultures, and if I order this again, I’ll see if they can amp up the urchin. It was a good dish, but not a great one.

Japonica is serving many of their famously good selection of sakes to go, and at a staff member’s suggestion we got a premium hot sake that is usually served cold. The sakes that are served hot are usually cheap, but this showed that the quality makes a difference. Some of the delicate sharp notes may be lost, but the fruity aroma is enhanced. On my next visit I’ll order the same sake hot and cold to see how it changes, but that is an experiment for another day. So is their matcha nigori sake, which sounded intriguing, because green tea and sweet, creamy sake sounds like a great idea.

Japonica offers mochi ice cream for dessert, but we passed on both visits. The cost was surprisingly reasonable, about $75 for food on the visit with the sushi rolls, $60 on the visit with soups and salmon skin salad. You can spend more if you enjoy sake, and you should because they have a great selection and it can be reheated or chilled with no ill effects. Enjoy a dinner of Japanese fusion delicacies and you’ll have great memories to get you through the season of roast beef, mashed potatoes, and pumpkin spice.