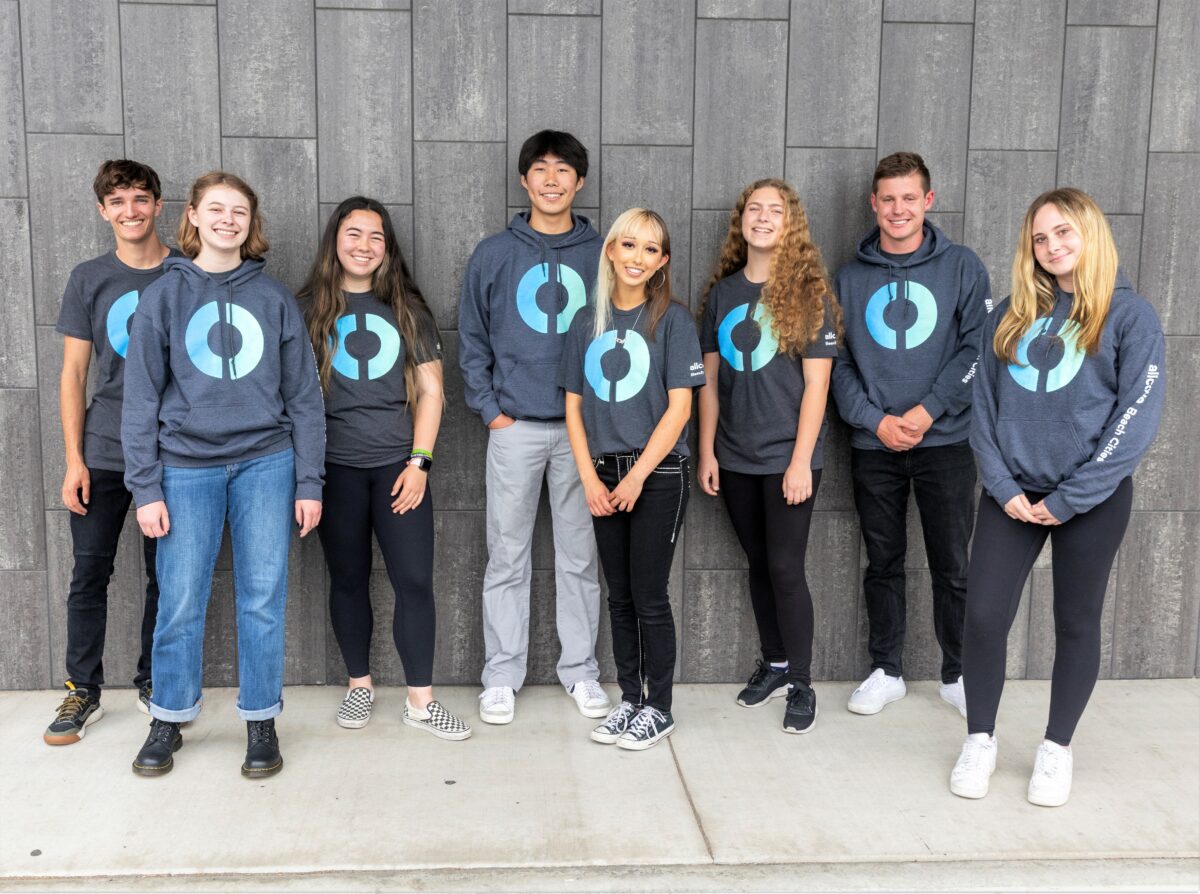 The ribbon has been cut, the tours given, the food decided and the bands booked.

allcove is the first Southern California branch of a program developed by Stanford University to offer aid to youth ages 12-25 for mental health, physical health, peer and family support, substance use prevention, education and employment.

Initial funding for allcove Beach Cities – located in the former South Bay Hospital – came from a $2 million, four-year grant from the California Mental Health Oversight and Accountability Commission, secured by Muratsuchi. Another $1 million for construction was included by Congressman Ted Lieu in the federal Omnibus bill this year.

Will cove fest happen every year?

“It’s an inaugural and a grand opening, I think it’s TBD,” said Dan Smith, director of communications for BCHD. “So we’ll see.”

The center opened Nov. 1, with physicians, licensed clinical social workers and a psychologist overseen by Clinical Director Shana Martinez, a school-based BCHD mental health and youth engagement officer for the past six years.

“Some (staff) are still being onboarded,” said Steward. 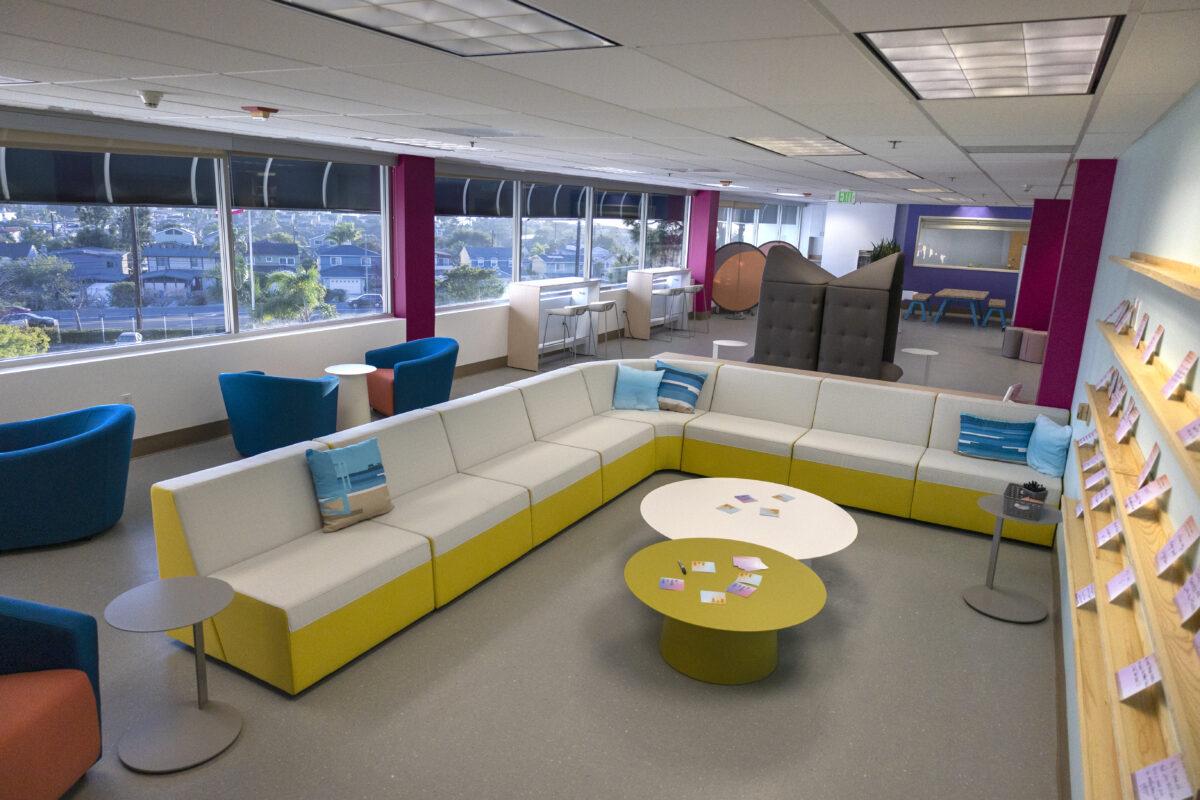 “The Cove” is a centerpiece of the allcove facility, on the fourth floor of the former South Bay Hospital at the edge of Redondo Beach and Torrance. Photo courtesy of BCHD

allcove accepts kids from anywhere, though Steward said 93 percent so far have come from the Beach Cities. A total of 75 have gone through intake. Most have requested mental health individual therapy.

“We’ve been able to help people in meaningful ways just in these three months,” Steward said.

She told of a family that had called 10 different clinics/doctor’s offices for an appointment without success, and then tried allcove and saw someone that same day.

“This is a place where the first question is not, ‘what is your insurance,’ but ‘how can we help?’” Steward said.

“We’re really excited to see the people there (Saturday) and hopefully that is what it will look like in the future,” said Rani C., 17, a senior at Redondo Union High School and member of the allcove Youth Advisory Group. “We’re seeing people slowly trickle in. A little bit more people every day.”

The bands are Concave, Hallo Haus, The Pres and the headliner The Vlasics, all made up of youth ages 17-20 from the greater South Bay.

“This is the musical DNA of next-generation, post-alternative rock music… An unexpected byproduct of the pandemic is all of a sudden you’re practicing everyday with your bandmates in your pod. All of these young musicians are ahead of schedule.”

“(Now) is the bigger promotional push to make sure young people in the community know we’re here to help,” said Steward.

It is meant to be a place with many reasons to go to.

“(Youth) can drop in after school to do homework,” Steward said. “It’s also a safe space to come and have a pause or a re-set in the midst of their busy lives.” 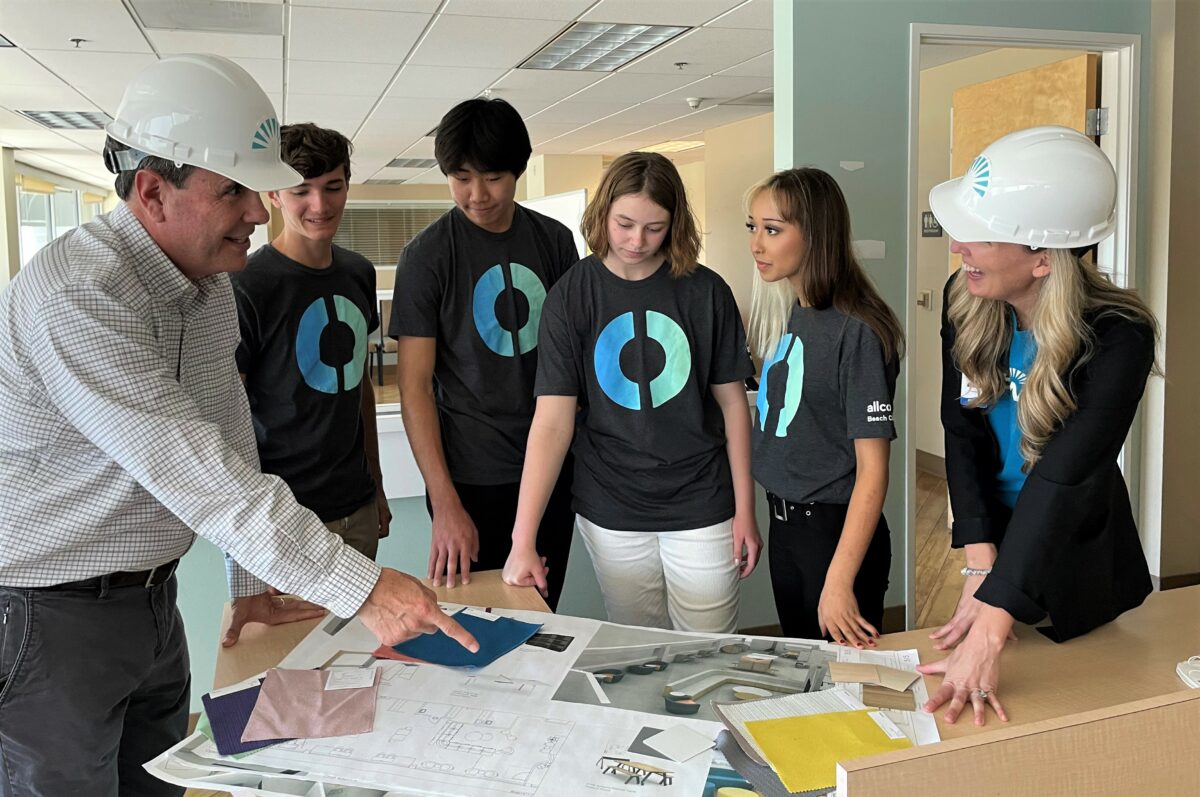 The intention is that as kids grow up and perhaps move away for school or otherwise, the “allcove” name will be a recognizable the place to go for help.

Each branch offers in-person and online services, a choice between open and private spaces, therapy and/or supportive conversations.

The program’s stated mission from the Stanford Center for Youth Mental Health and Well-being is to “reduce stigma, embrace mental wellness, increase community connection and provide access to culturally-responsive services.”

Indivisible Arts is the local allcove creative partner. They plan to put on open mic nights, poetry readings, art workshops and more at the center.

“It’s been a long process, and we got to contribute to every single aspect of it,” said Rani C.

Editor’s note: By policy, allcove does not identify its Youth Advisory group members by last name. 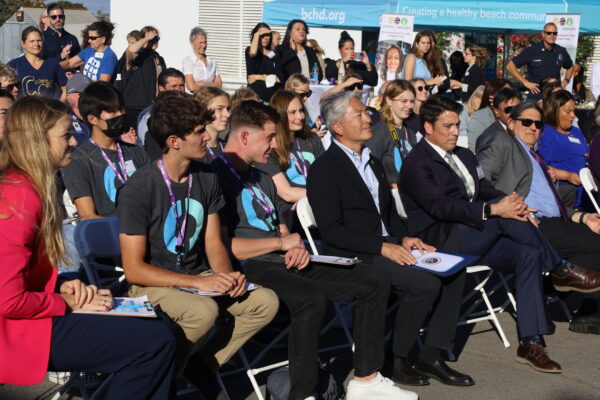 The crowd looks on at the Oct. 18 allcove ribbon-cutting, including State Assemblyman Al Muratsuchi at right. Photo by Kevin Cody