Broadcasting Beach life to the world from Hermosa 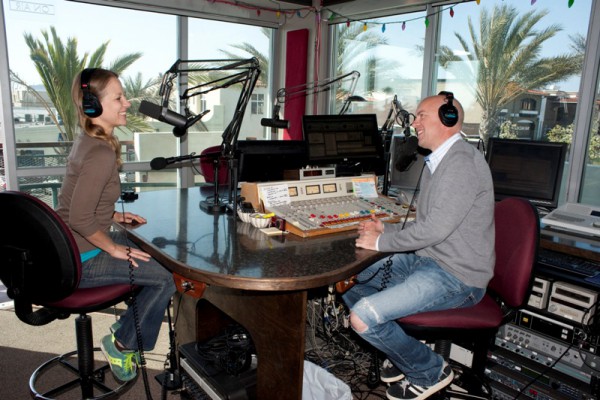 Two stories above Pier Avenue in Hermosa Beach a 350-square-foot glass studio overlooks the ocean and the lively coast town. Inside the glass bubble, Mark Sutherland, one of the original creators of Radio Disney, broadcasts beach radio to the world.

“I grew up in the Midwest, and I always wanted to be at the beach.” said Sutherland. “Here I find myself living at this place I wanted to visit. [Beach life] is really something incredible, and I thought if I could find a way to package it and share it with the rest of the world, I really thought it was something that would resonate.”

Static Beach, a radio station launched in 2007, broadcasts to over 15 FM stations across the country as well as through online streaming and an iPhone app that keeps both locals and people around the world abreast of beach life. The show attracts more than 86,000 Facebook listeners a month.

“Nobody really knew we were here because we’re not on in L.A.,” Sutherland said. “Still we found we were really resonating in the beach cities [across the country]. We started picking up places like Corpus Christi, Fort Myers, Panama City and even Sioux Falls, because there’s a big lake in that area.” 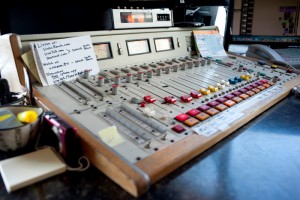 The soundboard at Static Radio. Photo by Chelsea Sektnan

They are also played in land-locked towns like Cortez, Colorado, and Louisville, Kentucky as well as in the Cayman Islands, the Bahamas and Jamaica.

Two months ago, the team at Static Beach began their newly launched “Friday Night Live” show, a program which brings both local and international talent into the Hermosa Beach studio for a night of live acoustic performances and on-air banter.

Sutherland kicks off the weekend with co-hosts actress Stephanie Reibel and the drummer from Bush, Robin Goodridge from 7 – 10 p.m. while overlooking the bustling Hermosa Beach nightlife.

“Instead of doing it in a high-rise in L.A. and having it be so corporate, we wanted to step back and put it in a studio by the beach, and bring the beach and beach culture into it,” said Sutherland. “With our location we’re kinda like TRL [Total Request Live] to Times Square— but to radio at the beach.”

Singer-songwriter and guitarist Justin Dzuban was recently invited into the studio.

“It’s a really warm and welcoming environment,” Dzuban said. “I brought in a couple of friends, and it just feels like you’re hanging out… The view of the ocean gives it that really beach-lifestyle feel.” 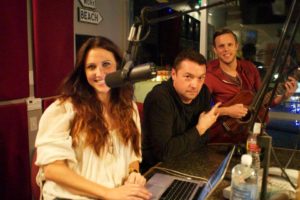 The musicians that walk through the doors of Static Beach come from all over the world and play different styles of music. For Sutherland, they have to have one thing in common. They have to be able to play live.

“I think I played like eight songs or something. They just told me to keep it going,” said Dzuban.

“We seem to have stumbled into this sound that everybody enjoys,” Assistant Program Director Chris Junge said.

As the sun sets over the beach, the one-room studio evolves from a laid-back beach station to a full-blown radio show that attracts quality talent from all over the country and world.

“We’ve got a real powerful show that’s really blown up digitally,” said Sutherland. “We’re bringing a ton of bands in… It’s fun to sit here and feel this thing blow up, in a good way, around us.”

For singer Nick Shattuck who has been on the show multiple times, it’s exciting to play on a station that his family back home in Wisconsin can tune into.

“It’s amazing to just jump on Facebook and talk to my friends and family 2,000 miles away and say through the web they can hear my newest songs written in California, inspired by my last year living here, played in between all the famous guys,” said Shattuck. “Plus, it’s a radio station with an ocean view. It’s an honor to play there and hang out with them… It’s just cool, I don’t know how else to say it.”

“We’re reaching out to local L.A. artists, in many cases unsigned, but really talented. There’s just so many talented people in this town,” Sutherland said. 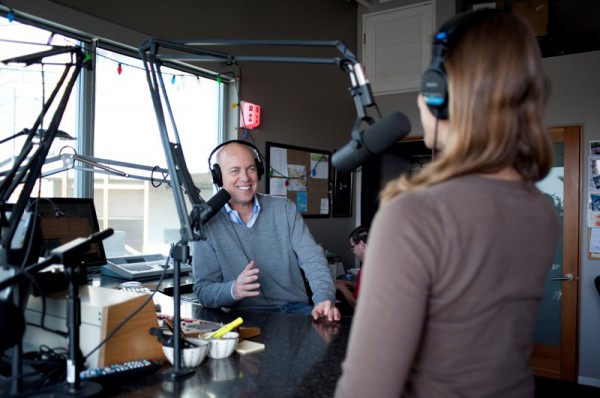 Static Beach Account Executive C’Lesa Kay has found the variety of listeners surprising. “Different types of people with different kinds of music taste love what we’re putting out,” said Kay. “You wouldn’t think someone who likes rock would jive with the same playlist of others, but they all like the same playlist. We’ve found a universal sound.”

Social media has also helped give the radio a push in listeners.

“When Robin from Bush first started on the show he came in and let his [Facebook and Twitter] fans know, ‘Hey Bush fans, I’m going to be on this show, you should listen,’ and those people still listen,” Junge said.

For the crew at Static Radio, it’s all about bringing the beach vibe to the world.

“From a guy freezing in Columbus Ohio, I can turn on Static Beach and truly escape into a better state of mind,” Facebook follower Kevin Minerd said. 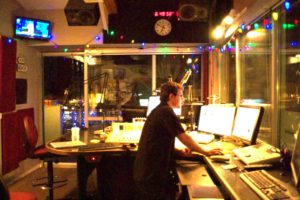 “The best part is that radio’s able to share something like this with the world without ruining it,” said Sutherland. “Sometimes these TV reality shows like Jersey Shore or any of the others sometimes change the flavor of something. With radio, the great thing it does is that we can share the best of the beach with the whole world, but it really doesn’t screw up Hermosa Beach.”

Static Beach can be found at Shoutcast.com, Facebook.com/staticbeach, Live365.com, Tunein.com and Ustream.tv. They also have an iPhone app.