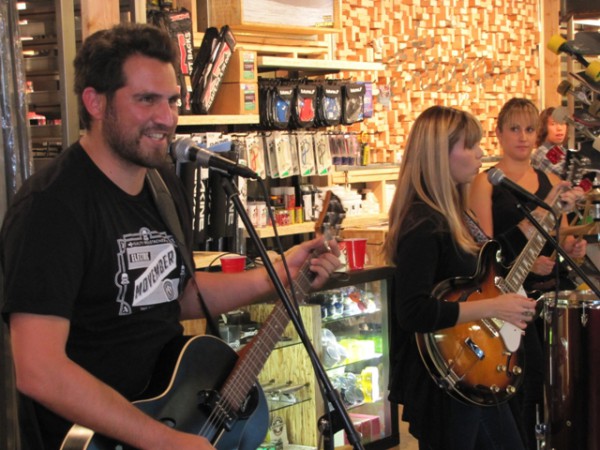 While the South Bay is traditionally and affectionately renowned for its punk and reggae roots, the local musical spectrum has been trending toward eclecticism. Therein, many bands are flirting with, submerging into, or weaving in folk-based elements to their sound. We’re seeing a mounting trend toward Americana, Country, and Bluegrass roots, and various brands of blended bits that I’m tempted to categorize as a whole new bag called Whiskey Honk.

Barley Legal, Hang Dog Expression, Green Blossom String Band, Grit Dogs, Johnny Jump Up, Tim Matson, Brook & River, Hoist The Colors, The Midnight Screening, and Goodfellas are just a few local acts currently shaking down the folkier side of the street. Bullys & Matadors, and Ok… Here’s The Plan are a couple of whiskey-breathin’, folk blended outfits new to the scene that you may also want to look into. Coincidentally, both contain a former member of the dormant, in flux local metal group Gabriels Fallen, and both are performing the My Beating heART SHOW’s (music with live painting) Album Cover Edition tonight at the Lighthouse Cafe in Hermosa Beach.

Bullys & Matadors are Steve Huante (dobro resonator guitar, vocals), Kira Lingman (hollow-body Casino guitar, foot-tambourine), Rachel Togut (cocktail drum kit, percussion, back up vocals). Huante is both a South Bay and local music veteran, RUHS class of 1999. While it would never be guessed, the two class of 2005 Mira Costa grads Lingman and Togut are new to being in a band.

Their sound is like riding upon a horse through a desert on your way to kill Bill just after having defeated T-1000 on Judgement Day, and you just need a damn drink; so you have one. At least, that’s what visualized itself in my mind when I saw Bullys & Matadors during Becker Surfboard’s observance of Hermosa Beach-based businesses’ First Thursdays.

Huante lays it out as a blend of Rock, Country, and Blues, but acknowledges that they also dabble even in Flamenco and are willing to try anything. He says, “It’s a couple hours of good live music with a great-looking, ripping pair of girls on cocktail drums and guitar, and a Mexican-hybrid of Elvis and Johnny Cash who ate Glen Danzig.”

As the surf shop manager suggested, there is a roughness, or rawness, to the Bullys – with gritty, nasty, pingy lead guitar jams brought on mostly by Lingman, but alternated with Huante.

“Kira and I share the singing and [guitar] leads,” says Huante. “I’d say I’m more rhythm, but fill in when called for leads… but I might sing a little more and she leads way more! Nice not pulling double-duty all the time,” he adds with reference to his Gabriels Fallen days as both the lead guitarist and vocalist.

Songs are carried by twangy lead vocals from Huante, alternating with the gorgeous voice of Lingman.

Lingman. Another name you should know. An interesting component of Bullys & Matadors is the presence and prowess of Kira Lingman: one of the South Bay’s best kept, jaw-dropping musical secrets, who’s never even been in a band.

“A brief rundown of my musical history and experience?” asks Lingman. “This is it… I’ve never been in a band until now.”

A few guitar lessons in high school… too self-conscious over lacking classical training to play with others… a few open mics in college… That’s it. After a year of working together at Becker Surfboards, Huante discovered Lingman’s interest in playing guitar and singing, and invited her to jam with his band mates of the time. The joyous experience provided the poignant shift which would eventually unveil a considerable local music talent. She’s jamming, slaying, and singing in Bullys & Matadors.

“Kira has the most soul that I’ve ever experienced from a blonde-haired, blue-eyed surf lady,” says Huante.

Before Togut joined the band, it was just Huante and Lingman performing acoustically, where Lingman displayed her dynamical musical abilities.

She says, “Before Rachel was in the band, I felt like Dick Van Dyke in Mary Poppins… I kept beat with my feet: tambourine with one foot, a Cuban noise-shaker with the other. Then we found out Rachel plays drums, and asked her to sit in with us… We couldn’t be happier, because she brings such a happy, positive energy – and she can really wail!”

While the Bullys’ set runs through a variety of “countrified” covers, by anyone from Elvis, Johnny Cash, and Patsy Cline to Billy Idol, Misfits, and Tiger Army, they also filter in a number of originals. Appropriate songs like “Drunk On You,” “Six String Slinger,” and “Whistle Arrow” are just a few.

“We’re hoping to have an album completed by the end of the year,” says Huante. “Goal is to have a full length out by this fall, and we’re almost there as far as enough original material – just have to tighten ‘er up a bit before dropping money on recording.”

Three RUHS grads spanning three classes, and one dude from Incline Village (Nevada side of Lake Tahoe). One on resonator guitar and harmonica, one stroking the acoustic guitar, one picking the mandolin, and one slapping the upright bass. They’re Ok… Here’s The Plan, and they say it’s “Folked Up Whiskey Music.”