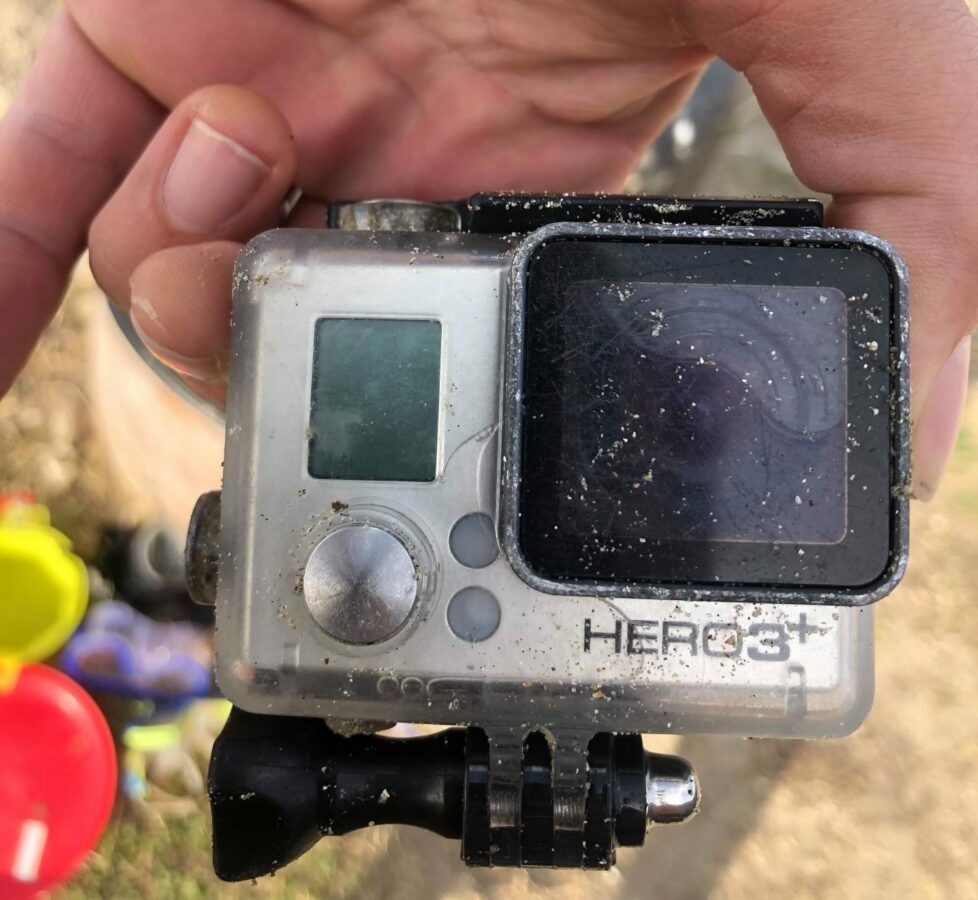 GoPro Hero 3 found by a trash bin at the end of RAT Beach, near where the trail goes up to Malaga Caves. Photo by Tom Bertolotti

GoPro Hero 3 found by a trash bin at the end of RAT Beach, near where the trail goes up to Malaga Caves. Photo by Tom Bertolotti

When Italian photographer Tom Bertolotti stumbled upon a half-buried GoPro camera on January 12, in the sand near RAT Beach, he thought it belonged to a friend of his, who recently lost a camera while paddleboarding.

“It was an exceptionally low tide that day and there was a lot of junk coming up from the sea,” Bertolotti said. “I thought it had been in the water for maybe a week at most.”

Bertolotti found out the camera was much older than he had thought after he went home and inserted the memory card into his computer. There were photos and videos of a mystery woman bodyboarding in a yellow and black wetsuit, dated between February 14, 2013 and March 3 of that same year — nearly eight years ago.

“I like to think it was a Valentine’s Day gift because of when the first photo was taken,” Bertolotti said. “So I made it my mission to reunite the photos with the owner.”

Bertolotti took stills from the video and posted the images to various Redondo Beach Facebook groups. Within 24 hours his various posts had been shared and commented on hundreds of times. 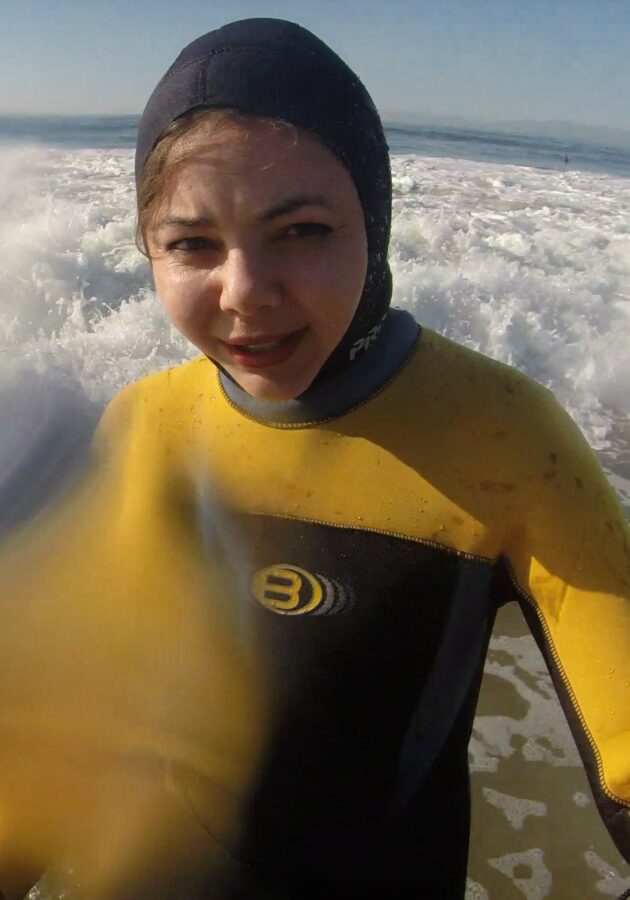 A still from a video of Lily Barrett boogie boarding near RAT beach in 2013. It was one of two photos Bertotlotti posted on Facebook. Photo by Lily Barrett

“It started going viral,” Bertolotti said. “People just kept commenting. Some had weird and wild theories. I was even told to report it to the police to help crack a missing persons case.”

It wasn’t until the next day that Frank Rapoza, an artist living in Las Vegas, came across the post, after an old high school friend had shared it on their timeline.

“I do a lot of designs for T-shirts and have come across the camera owner’s page very recently while looking for David Bowie designs,” Rapoza said. “I Thought this woman looked familiar and started to look at my browser history over the past week.”

Rapoza went back and found the website he thought he recognized her from. It turned out to be a sustainable clothing company based out of Los Angeles, named Together California. He shared his theory with Bertolotti on Facebook.

Bertolotti then looked up the brand on Instagram and saw that the woman is featured as a model in a number of the photos. It turns out that model is also the co-founder of the brand, Lily Chehrazi Barret, who confirmed it was her GoPro later that day.

“She was really happy,” Bertolotti said. “I want to say we found her in less than 48 hours.”

Barrett, who currently lives in Downtown LA, remembers boogie boarding with her husband at Torrance Beach, between Redondo and RAT Beach on the day it was lost.

“I had it mounted to my board and then the piece came loose, so my husband just started holding it,” Barrett said. “But he let his guard down and a huge wave came and knocked him over and took the camera.”

Barrett gave her husband a hard time for the rest of the day for losing the camera and said that she’d secretly wanted to get a newer one anyways. She was surprised to hear from Bertolotti.

“It was really thoughtful. He transferred me all the photos last night,” Barrett said. “It was funny to go through them with my husband, we were cracking up.”

Barrett’s husband is from the South Bay and the couple lived in Redondo Beach for many years. Barret said she recently took a break from boogie boarding but has been drawn back to the beach in recent months. 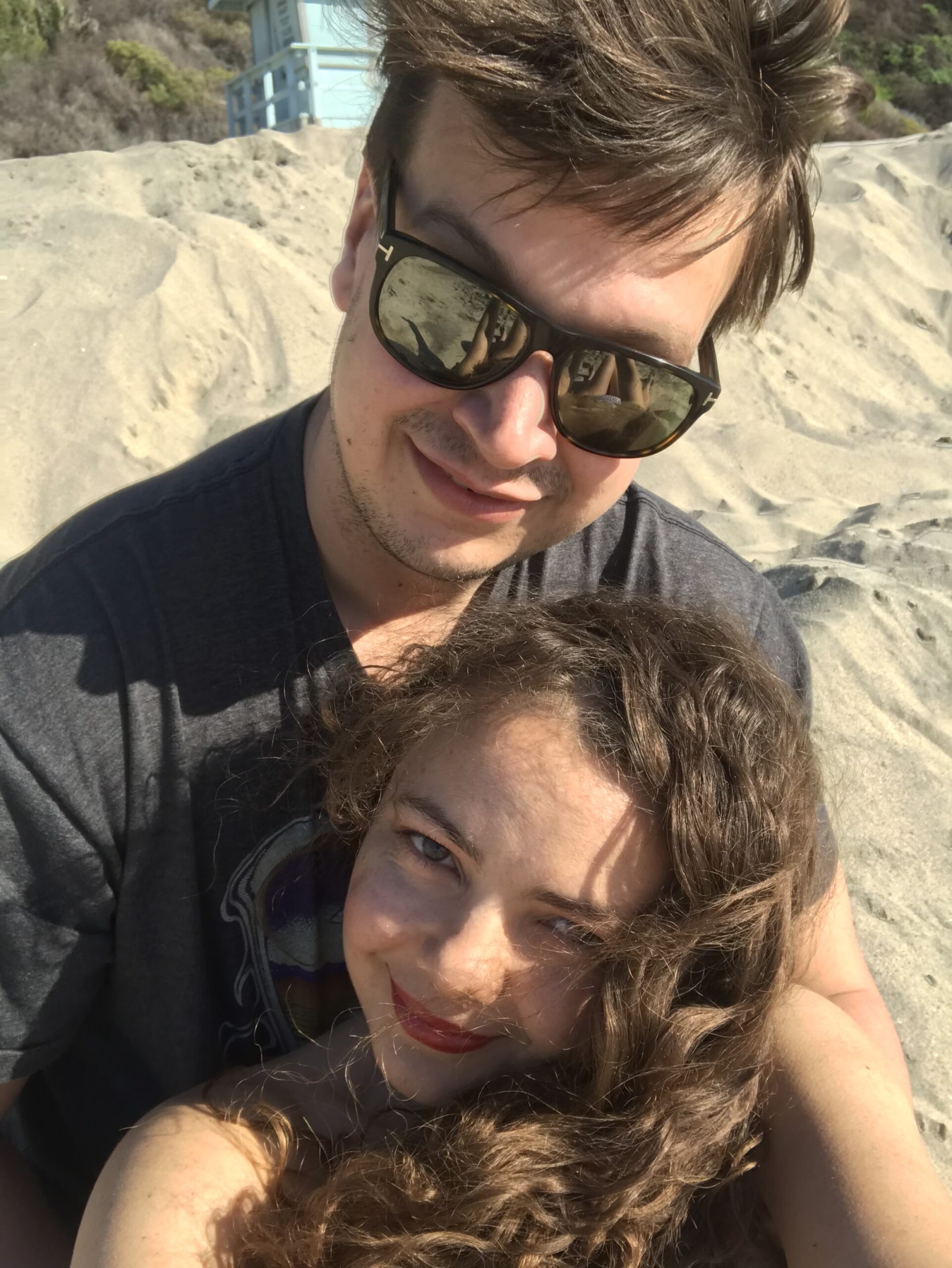 Lily Chehrazi Barrett and Benedict Barrett lived in Redondo Beach before moving to Downtown LA a few years ago. The GoPro had apparently been lost at Torrance Beach sometime between 2013 and 2104. Photo courtesy of Lily Barrett

Bertolotti’s theory that the GoPro had been a Valentine’s Day gift for Barrett turned out to be correct.

“I think this is a treat yourself moment,” Barett said. “Because he bought that one for me for Valentine’s Day in 2013, I’m going to say this Valentine’s Day, please get me the new one.”ER