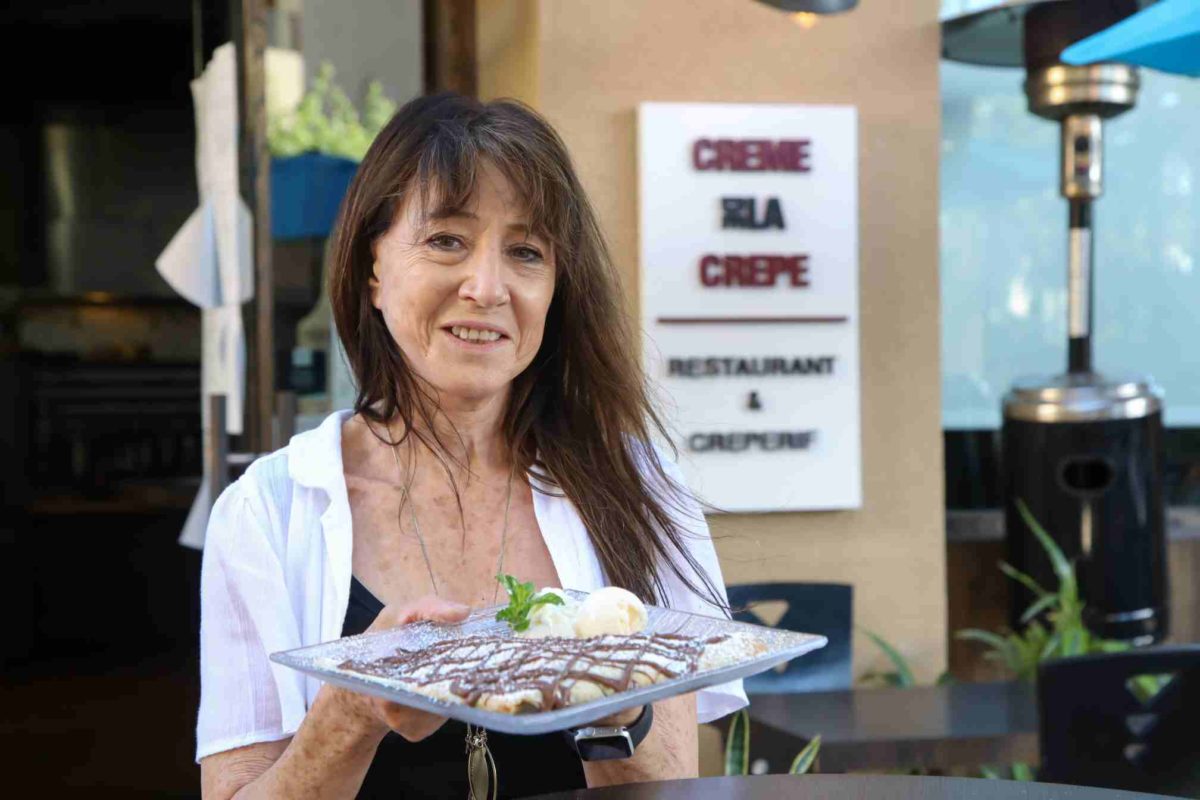 When you dream of a summer vacation in a sophisticated city, your mind is likely to turn to Paris, perhaps to a fantasy involving a leisurely meal and a glass of wine at a sidewalk café overlooking the Seine. In a typical July or August your companions will mainly be other tourists, because Parisians are notorious for taking their own vacations then. Most travelers don’t mind, because the scene is just as lovely, even if the people at the table next to you are you speaking in Swedish or Persian instead of French.

None of us are traveling much this year, but that’s no reason not to pursue the local equivalent of that particular experience. For the Peninsula that would be a meal at Creme de la Crepe, which has a location at the top end of the Promenade on the. The architecture is generic California mall, but the solidly built cafe tables shaded by blue umbrellas and flanked with potted shrubs lend a sense of style.

Though there are crepes in the restaurant’s name and on the menu, much more is offered here. My wife and I mused over some pastas and risottos we had enjoyed on previous visits before deciding that since we were in a French restaurant, we should order accordingly. We happened to be served by co-owner Joelle, who conscientiously checked to see if she could accommodate a food allergy and was generally helpful with food and beverage suggestions. After much consideration and some negotiation, with glasses of white wine and kir as a lubricant to our thought processes, we finally figured out what to have. We ordered quickly before we changed our minds again, and our appetizers arrived as the shadows were lengthening and the sun set behind the hill.

I had ordered the three-course menu at $35, which had five different starter choices, while my wife chose to dine a la carte. She chose a niçoise salad, an item that is made in many ways but always includes tomatoes, anchovies, and olive oil. Those were the only ingredients in the original, but later chefs added lettuce, green beans, olives, potatoes, hard boiled eggs, and roasted or raw bell peppers. What started as a peasant fishermen’s dish has become one of the cultural symbols of the Provence region, though some chefs fancy it up to the point where it is unrecognizable. Creme de la Crepe serves a solidly traditional version with roasted bell peppers and several large fillets of fresh anchovy. It is precisely the celebration of rustic flavors that it is supposed to be, and the generous portion makes this a fine hot weather meal. 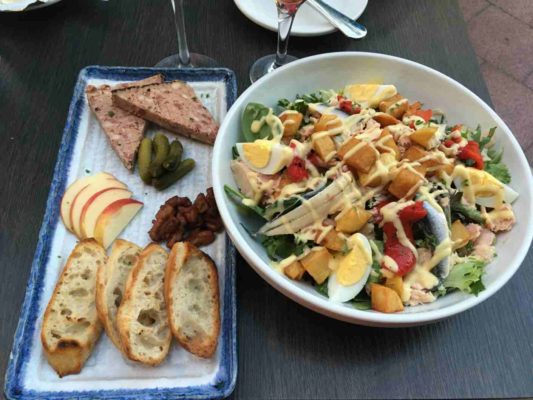 I chose another peasant treat, the pork pate served with cornichon pickles, apple slices, candied walnuts, and toasted baguette. As a friend of mine once said, it took the French to make cold meatloaf paired with bread and some odds and ends from the refrigerator and turn it into a gourmet item. That’s essentially true, and anybody who has ever enjoyed a really good cold meatloaf and pickle sandwich will defend the combination of flavors. Making it with top quality ingredients and serving it so that you can savor each element makes a college student midnight snack into something fit for the finest of tables.

For our entrees my wife selected a crepe Normandie, stuffed with goat cheese, spinach, prosciutto, grilled onions, and sour cream, while I had steak frites, a bistro favorite. My wife’s crepe was made with buckwheat flour in the traditional style of northern France, which means it came from the kitchen a deep brown color that looks slightly burnt. It isn’t, that’s just what buckwheat flour looks like. The paper-thin pancake has a mild nutty flavor and slight crispness when fresh from the kitchen, and it’s the perfect container for the mix of cheese, vegetables, and cured meat. In this particular crepe the meat is a flavoring on equal terms with the others rather than front and center, which fits the traditional aesthetic. There are other items on this menu for those who enjoy meaty meals, like the lamb chops, beef Bourguignon, or the steak that I ordered, or even a burger, but it’s a healthy change of pace to dial back the animal proteins. 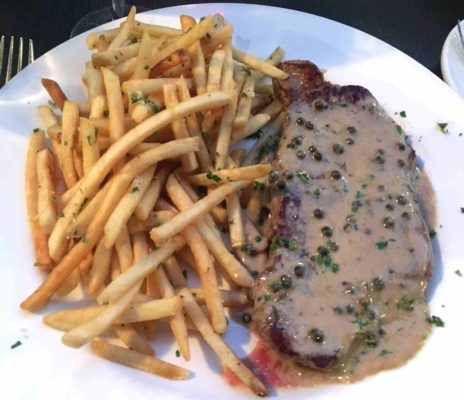 Which I didn’t do on this visit, because I hadn’t enjoyed a French-style steak lately. Chefs there treat steak differently than Americans, pan-frying rather than grilling it and often finishing the dish with a cognac-peppercorn sauce or a rich bearnaise. Pan frying doesn’t give the meat the grill flavor that is popular on this side of the Atlantic, though it is often more tender. Creme de la Crepe uses a New York steak, which is a more tender cut than the rump steak usually served in French bistros, and they favor a sauce of cognac, butter, cream, herbs, and whole green peppercorns. (Since the peppercorns are cooked into the sauce, they are soft and mild enough that you are not crunching your way through a mouthful of pepper.) It’s a different experience from the American classic, and whether or not you decide you like it better, it’s worth trying. There is nothing particularly unusual about the garlic fries, but they’re good and you can use them to get the last bits of the tasty peppercorn sauce. 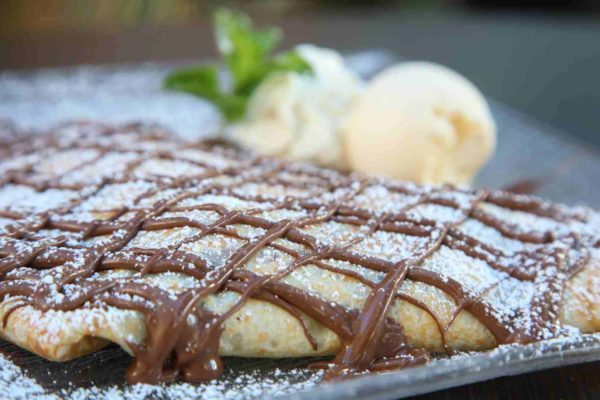 A chocolate drizzled dessert crepe tastes as luscious as it looks. Photo by JP Cordero

My prix fixe three course meal included a choice of any crepe from the menu, a crème brûlée, or a flourless chocolate fondant cake, and Joelle spoke so highly of the cake that we decided to order it. I generally prefer buttercream frostings to fondant, which is based on a sugar paste that can be overly sweet and gummy when mishandled, but by this point in the meal I trusted Joelle. That confidence was well placed, because the bittersweet chocolate made a lovely flavor balance that was amplified by a bed of chocolate sauce and a dusting of powdered sugar. Dollops of iced cream and whipped cream on the side helped make the one slice of cake a light dessert for two, though if we had ordered two items we would have undoubtedly finished them because they’re just that good.

A sumptuous and leisurely dinner for two with wine ran just over $100, which we considered a modest tab. It’s not reasonable to expect an atmosphere of quiet, peace, and gracious European service in the middle of a mall, but that’s what is available at Crème de la Crèpe. This chain started as one little restaurant in Hermosa and has grown to 7 locations, but they somehow managed to deliver service as personal as any little bistro around the corner from the Arc de Triomphe.