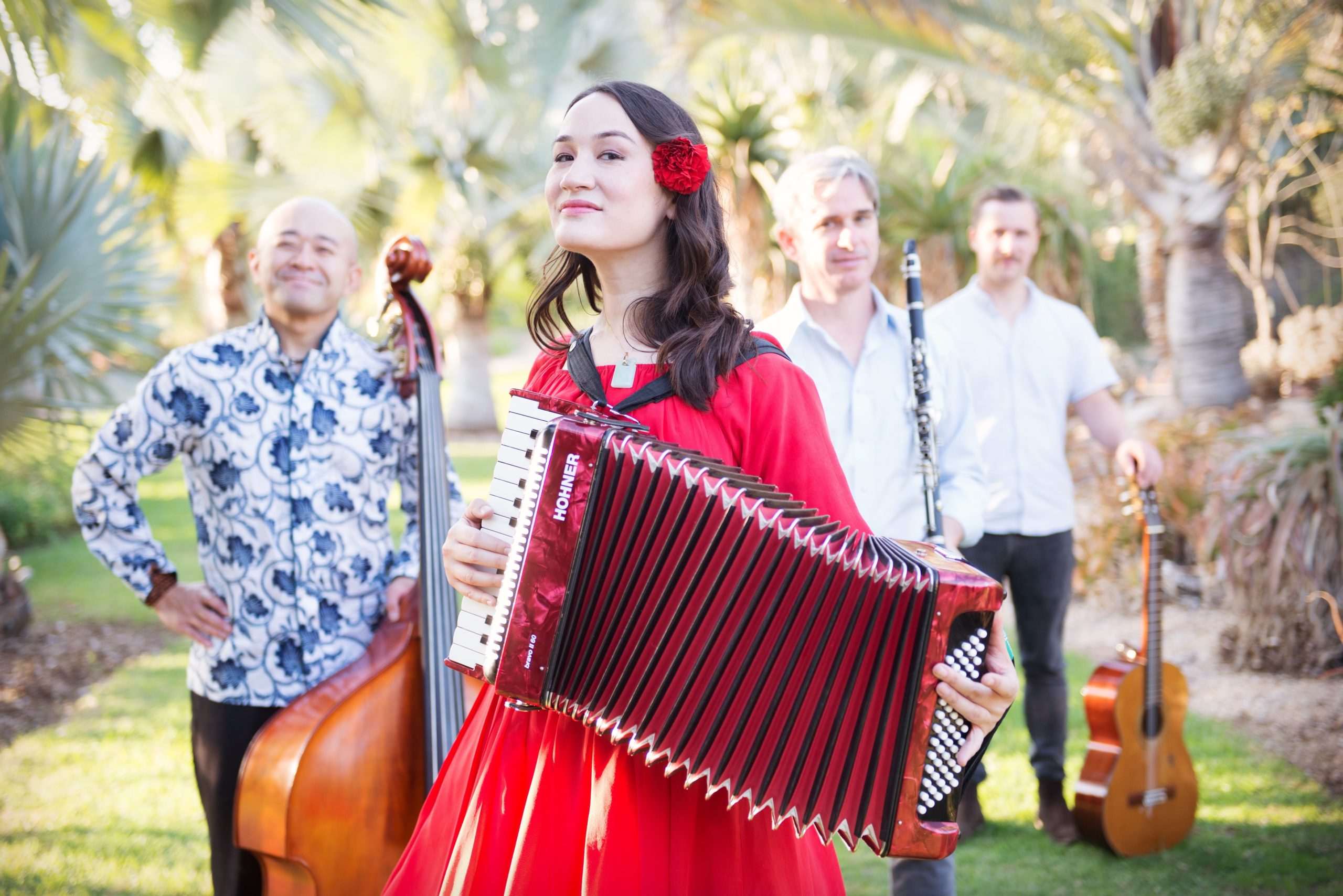 Jessica Fichot and her band. Photo by Nicolas Kaviani

Songs of past and present, near and far

Sorry to be the bearer of bad news, but you may have been expecting this: Jessica Fichot’s concert at Marsee Auditorium has been postponed, presumably to be rescheduled for next season. In the meantime, save this article and consider buying one or more of her CDs. – Bondo

For those on the alert for musicians with a singular grace and style, it is impossible to bypass Jessica Fichot, whose first two albums were in the French chanson tradition and whose third album is a paean to 1940s Shanghai jazz. This youthful sounding artist and her quartet perform on Friday at El Camino College.

“I grew up in France, in a suburb of Paris, close to Versailles,” she says. 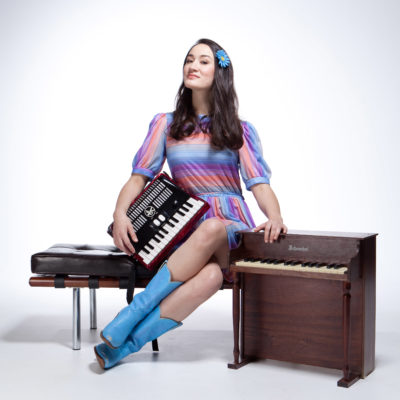 You always knew you wanted to be a musician?

“I don’t remember a time when I didn’t know that,” Fichot replies. “I think it came from the fact that I just liked to sing, and my parents never discouraged me. That’s probably why I never changed my mind; and then probably a lot of it is delusion, where you imagine that it’s going to be a certain glamorous life.” She laughs. “Now I know that it’s not always glamorous, but I can take it with a sense of humor.”

After completing high school in France, Fichot came back to the States (she was born in upstate New York to a French father and Chinese mother) and soon graduated from the Berklee School of Music in Boston with a degree in songwriting.

Not long afterwards she moved to Los Angeles with the intention of pursuing a career in music. What’s interesting is that while in France she only wanted to write songs in English, but once she’d settled in L.A. she rediscovered the French chansons of her youth. Her first two albums (“Le Chemin” in 2007 and “Le Secret” in 2012) are comprised of songs, most of them originals, that were inspired by the tunes she heard growing up on the doorstep of a multicultural European capital.

Earlier, Fichot had been writing children’s songs for educational programs, but about 10 years ago she formed a band and began writing, recording, and performing with them. She’s since toured the United States as well as overseas.

“When I perform it’s usually with a quartet. It’s me on vocals and accordion and a toy piano.” Her core band features a clarinetist, stand-up bassist, and classical guitarist.

Although she’s proficient on both the piano and the accordion, “I’m not a virtuoso on any instrument.” But does she compose her own music on one or both of those instruments? Somewhat surprisingly, the answer is no. 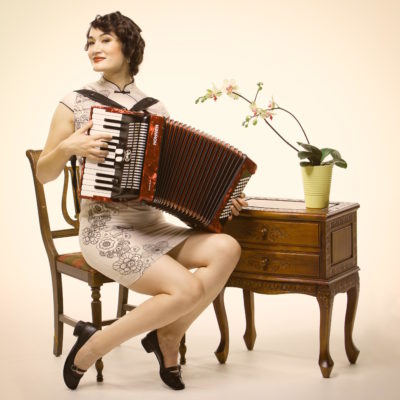 It’s all in the voice

“I feel like if I wrote on the piano or the accordion I would be limited by my skills on the actual instrument. So for me, the best ideas that I have musically, especially for melodies or lyrics, come when I’m not using any instrument at all.

“My strongest instrument is the voice, and writing songs is not quite like composing instrumental music. For me, songs are the songs that are sung. They need to be written by the voice.”

It’s a statement that makes a lot of sense. Fichot has a warm and inviting voice, a bit ethereal as opposed to earthy, and with a charming flirtatiousness rather than being ardently sensual. On some tracks (“Le Secret” on the album of the same name, for example) I’m reminded of Mary Hopkins and her late 1960s hit, “Those Were The Days.”

Although Fichot sings in five languages, she seems especially respectful of her French-Chinese heritage. We see a few nods to her lineage on “Le Chemin” and “Le Secret,” the latter with a cover in Mandarin Chinese of Cher’s “Bang Bang” (1966), written by Cher’s then-husband Sonny Bono. But then there’s the third album, “Dear Shanghai” (2014), which is a delightfully packaged recording in every sense of the word, in which Fichot evokes and illuminates a faraway and long-ago time. She combines tunes written in the 1940s with compositions of her own that emulate the sound of that era.

“The style of music from Shanghai in the 1940s actually debuted in the ‘20s,” Fichot says, “and coincided with the introduction of the gramophone record in China” The result is a blend of European-style jazz (I think of Stéphane Grappelli) and Chinese singing. One imagines the heyday of this music extending from the 1920s to the mid-1930s before being impacted by the invading Japanese, resurging in the late 1940s, only to be repressed again under Mao Zedong.

I’m guessing that “Dear Shanghai” might be a hard sell in that it’s period music in a language that most Americans don’t speak or comprehend. But you know what? I don’t think this matters, and I’ll tell you why in a moment.

“When I recorded the album,” Fichot says, “the goal was to do something a little different.” What she means is that she didn’t set out to faithfully copy the originals, but to allow modern elements into the production. I won’t say it’s “Americanized,” but it’s pleasant to the ear (if you don’t mind vocals occasionally being in a higher range). “The most unusual thing about it,” Fichot points out, “is that it’s sung in Chinese. But in terms of instrumentation, it’s very similar to the music from the ‘20s and ‘30s in France. You have clarinet, you have guitar, upright bass, drums, piano. I think it’s pretty accessible.”

So do I, and that’s because I hear in it a more intimate version of Cirque du Soleil’s world music mélange, more scaled down, to be sure, and one able to fit inside of a darkened cabaret, whether in Europe or in Asia. I can picture a small stage in front of maybe a dozen circular tables, one or two fashionably dressed couples at each table sipping drinks, chatting amicably, not chastised if they decide to light up a cigarette.

And if you and I were sitting at one of these tables, what would we be drinking?

“To go with my music?” Fichot says. “Probably, in most cases, it would be a whisky cocktail of some sort, like an Old Fashioned. I’m not a big fan of red wine,” she adds, “but I imagine that some people might enjoy it.”

I give this some thought and announce that I’d order a Whisky Sour.

Jessica Fichot’s concert in Marsee Auditorium is unlikely to replicate this kind of intimate scenario, and chances are there will be no bartenders or cigarette girls coming around, but perhaps we’ll find her again soon at a smaller venue. In the meantime, what can we expect from her show tomorrow night? 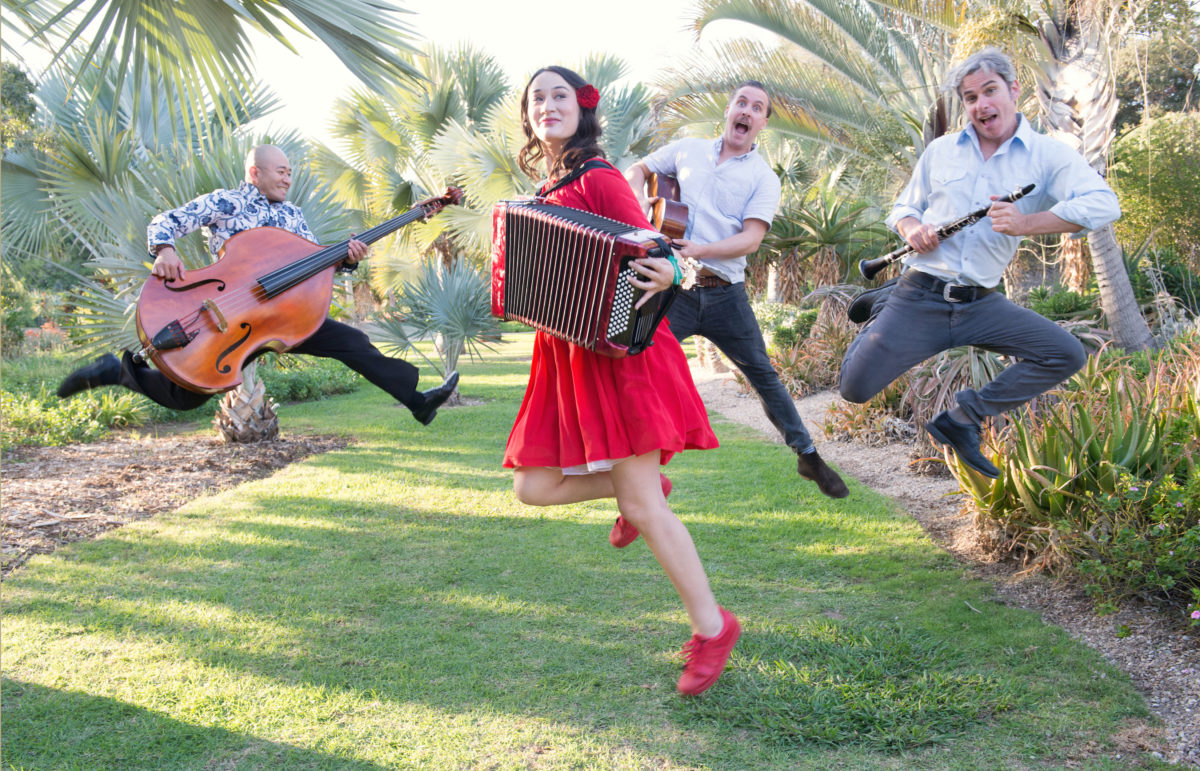 Jessica Fichot and her band. Photo by Nicolas Kaviani

And as the lights go down…

Selections from all three albums, more recent songs, and a few cover tunes. A new record is in the works, which is a bit overdue. This isn’t to suggest that Fichot has been taking it easy, because she’s also been composing music for video games and films. “The hardest part is writing songs for myself, for my band, because nobody’s given me a deadline.”

When El Camino College promotes a show they often hand out programs, and so Fichot was asked to provide a set list and lyrics. “I’m not used to doing that,” she admits, and truly, how often does one step into a bar or nightclub and receive an itinerary of songs? “Usually the set list will be done maybe an hour before we play. At first I was a little nervous about it, because I’m used to people not understanding what I sing about.

“But then I thought, this is going to be kind of exciting, partly because this is a show at a college and I know there’ll be music students there; and partly, because people will be able to read my lyrics, I will turn this performance into some kind of workshop. I’ll go a little bit more into the process of how we wrote certain songs.”

The group will also play a few tunes that Fichot didn’t write, and she’ll talk about those as well and perhaps why they appeal to her.

“In a two-hour or two-set performance it might be 60 percent original and 40 percent covers. If I play a 45-minute set it’s probably going to be mostly my own songs. I do understand that for people coming to a concert that’s in a language they don’t necessarily speak, two or three hours of just original music that they don’t know might be kind of tricky. So I’ll play some songs that people will probably know.”

Despite a certain fondness for several numbers on her three albums, such as the catchy “Dans le Métro” on “Le Secret,” or “Manli” on “Dear Shanghai,” during our conversation I inadvertently downplay the music’s commercial potential.

I backtrack a little, rephrasing what I’ve just said: You aren’t trying to have a hit song necessarily where you’re pursuing a certain formula.

“I think that’s true. But there’s certain things that are possible even in my modest music. There’s still a lot of cool things that could happen.”

No one should argue with that, because Fichot has already amassed quite a following, especially in cities–such as San Francisco, Ashland, and even Tucson–where she’s frequently performed. If she’ll make additional forays into the South Bay she may be able to add another name or two to the cities where her music is always well received.

As for what she’d like to achieve over the next few years, Fichot answers that it’s to continue as she has, except to make it even better. “Being ambitious means you’re never quite satisfied with what you have.”

That said, she adds, “In a way I’m doing what I’ve always wanted to do. Really, writing good songs and having them heard is my major goal.”